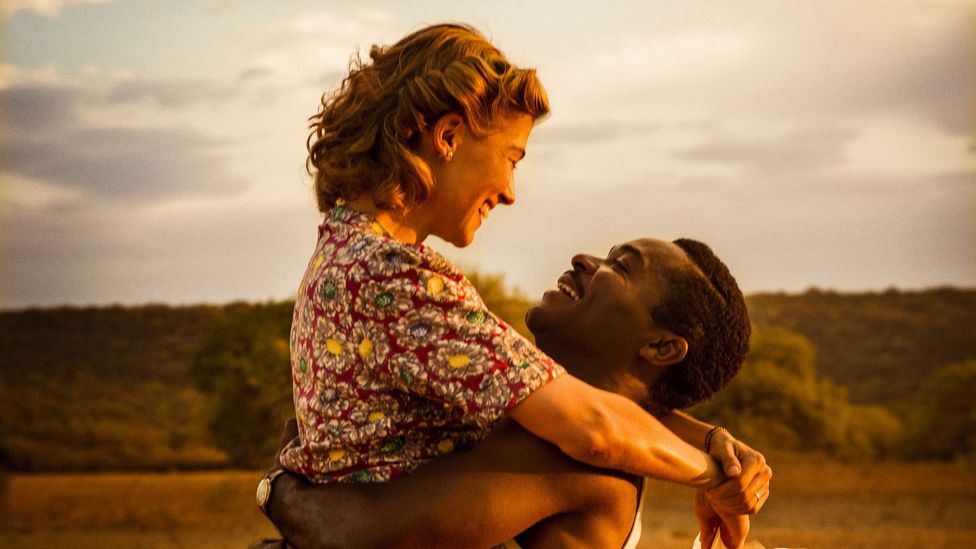 By Sam Adams 11th September 2016
We may hear about interracial love story A United Kingdom on Oscars night. But Sam Adams finds it too tidy and designed to comfort rather than make us question.
A

Amma Asante's A United Kingdom finds an elegant tale of racial reconciliation in Africa's colonial past, where the romance between the prince of what was then Bechuanaland and a white Englishwoman lay the groundwork for an independent Botswana. Too elegant, in fact: the movie, which was adapted by Guy Hibbert from Susan Williams' book, Colour Bar, has the feel of a real-life story with the edges sanded off, a tidy post-racial parable that will inspire audiences to nod in satisfied approval rather than re-examine the world around them.

Asante introduces Seretse Khama (David Oyelowo) in the boxing ring, sparring with a white opponent – a prelude to the diplomatic brawls to come, but also a promise of pugilistic fervour that never arrives. He's been removed from his homeland for decades, schooled in Britain and groomed to take his place as Bechuanaland's rightful king, while his uncle, Tshekedi (Vusi Kunene) rules in his absence. But he's still sheltered enough that he is thrown off balance when his sparring partner calls out a racial taunt, knocked to the ground and, for a time, unable to rise.

He meets Ruth Williams (Rosamund Pike) at a fundraiser for a British charity whose aim is converting Africans to Christianity, but she's only there as a guest, and she doesn't seem to have given much thought to Africa at all; when she learns where Seretse is from, she dashes home to locate Bechuanaland in the family atlas. But they bond over a mutual fondness for jazz, and a common agreement that Englishmen are terrible at playing it, and though his duties require his return to his homeland, Seretse decides he can't go without Ruth. And that is where their troubles begin.

The movie's Bechuanaland feels like a set, not a nation

A United Kingdom moves briskly through this early section, with a staccato rhythm that belies its period gloss. It's a story about love's consequences, not its origins, and de-emphasising the particularities of Seretse and Ruth's romance helps mitigate the fact that for all its geopolitical resonance, it's framed as a story about individuals, not nations. But in skimming through the first act, the movie never manages to establish that their love is worth fighting for, let alone upsetting the fate of an entire nation over.

Pike has the steel-eyed stoicism of a classic British wartime heroine; the mixture of wonder and resolve with which she meets Seretse's proposal of marriage, the way she tells him that she knows exactly what they're in for and chooses it anyway, makes you wish she could have worked with Powell and Pressburger or David Lean. But when Seretse's uncle tells him that it's selfish, even an insult, for the leader of a nation where blacks, barring the king, are still second-class citizens to bring home a white wife from the country that colonised them, it's hard to be entirely confident that he's wrong.

Seretse and Ruth's marriage sets in motion a potentially catastrophic chain of events. His uncle challenges Seretse's fitness to rule, and though a tribal council vindicates his legitimacy, the British government, who had treated Bechuanaland as a protectorate, uses the unrest as a pretext to impose direct rule and place Seretse in temporary exile. Jack Davenport and Tom Felton play the oily, nearly interchangeable Oxbridge types whose primary concerns, it's implied, are stabilizing Britain's relations with South Africa, whose apartheid-imposing government would consider an interracial marriage by the leader of a neighbouring country an affront, and assuming control of Bechuanaland's mineral rights before preliminary drilling turns up a natural resource worth exploiting. The country is, we're told, the third-poorest in Africa, but the discovery of copper or diamonds could transform its economy, assuming it's still in a position to mandate its share of the profits.

It's strangely lacking in urgency, a period piece that never breaks out of its period

Seretse has allies in London, too, but they barely register as representative presences, let alone characters. The same is true in Bechuanaland, where outside of Seretse and Ruth's extended family all we see are the undifferentiated masses. It's a myopic view of history, in which anything that's not in the foreground is simply a blur. Why do the men of the tribal council vote to support Seretse in the first place, and does their loyalty ever wane? Asante shows only the briefest glimpses of village life, and little more of the culture of the white colonists; the movie's Bechuanaland feels like a set, not a nation. Dramas need a focus, but they can suggest that there are lives lived outside their periphery.

A United Kingdomis handsomely made, and Oyelowo's great-man act still has power in it, even if it's starting to seem a tad familiar. It's pleasant and honourable, and it makes a worthwhile point. But it's strangely lacking in urgency, a period piece that never breaks out of its period. It's too easy to leave thinking things were bad then but they're better now, even as the headlines tell a more complicated and less optimistic story.