Loading
Language
Where does Canada’s accent come from?
Share using EmailShare on TwitterShare on FacebookShare on Linkedin 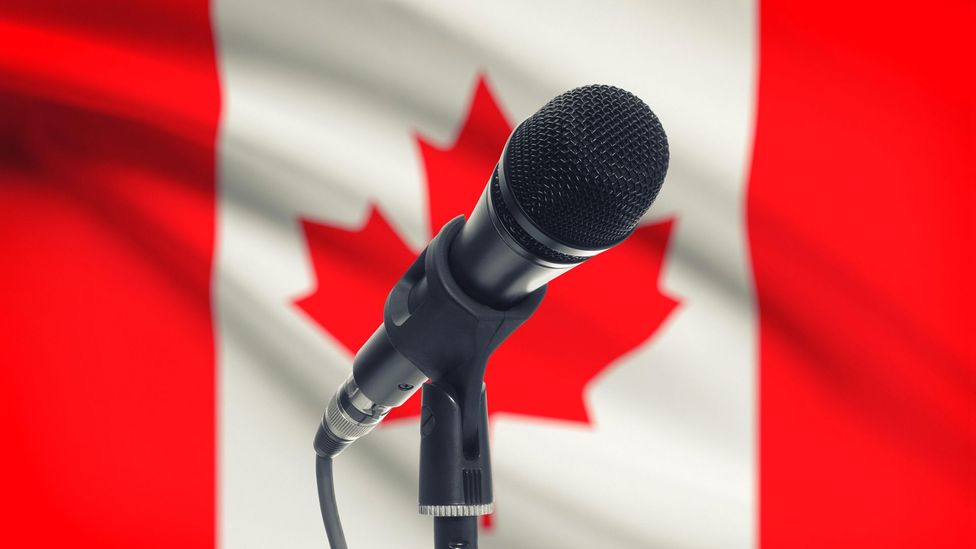 By Thomas Rogers 21st September 2016
The way Canadian English is pronounced is close to the US accent – but it’s still utterly unique and the product of singular forces, writes Thomas Rogers.
C

Canada has always faced several obstacles in defining itself to the outside world. For one, it’s a thinly populated country of 35 million all too easily overshadowed by its neighbour, a hugely powerful country of 319 million with economic clout, an enormous film industry and high-quality TV. Then there’s its history, which lacks the grand mythical arc of most other countries. And, more esoterically, there is the conundrum of the Canadian accent: to most people outside of North America, it is almost impossible to distinguish from the typical US accent – to the point that so many foreigners confuse the two when they’re travelling abroad and Canadians feel the need to attach a flag to their backpacks. 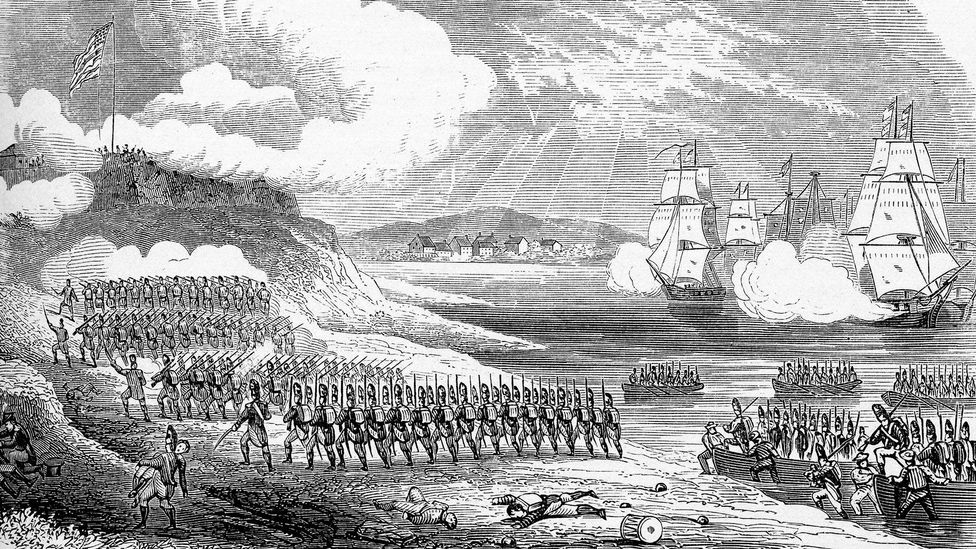 By the War of 1812, in which the US invaded Canada and the UK invaded the US, much of Canada’s population consisted of exiles from south of the border (Credit: Getty Images)

But despite some people’s skepticism there is, in fact, a unique Canadian way of speaking and, despite its subtlety, it remains remarkably resilient. Over the last several decades, the increasing interconnectivity of the world has threatened a number of local dialects across the world, but according to Charles Boberg, an associate professor of linguistics at McGill University and the author of The English Language in Canada , the Canadian accent is stubbornly persistent: “Canadian linguistic identity is here to stay on the long term.” 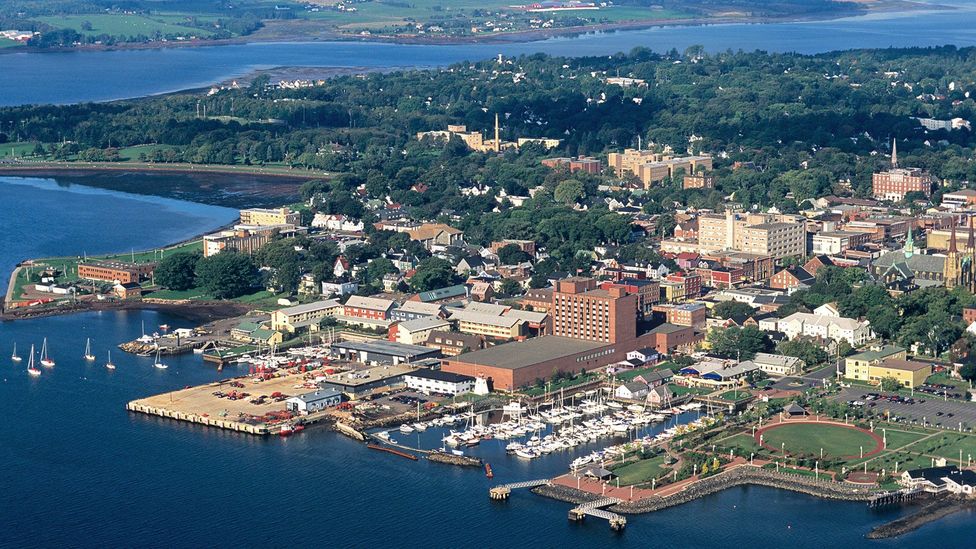 While exiled American loyalists to the Crown shaped the English accent in Ontario, the immigrants who settled the Maritime Provinces came from the UK and France (Credit: Alamy)

The primary reason for Canadians’ hard-to-identify accent is, of course, historical. Canadian English was partly shaped by early immigrants from the UK and Ireland, but it was affected much more by the arrival of about 45,000 loyalists to the British crown during the American Revolutionary War. By the outbreak of the War of 1812 a few decades later, a significant part of the population of Ontario – which had about 100,000 inhabitants – were of US extraction. The result, especially west of Quebec, was an accent lightly shaped by British English, but much more so by 18th Century colonial American English. Since Ontarians were largely responsible for settling Western Canada in the following decades, their Americanised accent spread across the country and eventually became the de facto accent for the majority of Canadians.

There are a few exceptions: Newfoundland’s population was disproportionally shaped by immigrants from southwestern England and southeastern Ireland, and since the island is geographically isolated and only joined Canada in 1949, it has retained a way of speaking that is dramatically unlike the rest of the country. Other parts of Eastern Canada – including Cape Breton Island and in parts of Prince Edward Island – have also retained distinctive accents.

But if a person travels into western Canada – into Manitoba, Saskatchewan, Alberta and British Columbia – the accent becomes more American-sounding and locally indistinguishable. “The West was a melting pot for settlers from many regions, so there was this leveling out of differences, not only in Canada, but in the US,” says Boberg. “The settlement depth in Western Canada goes into the 1890s, so it is about a century old. The time depth and the population density being very sparse, those encourage widespread leveling and homogeneity.”  This makes it very difficult, even for Canadians, to tell the difference between someone from Winnipeg and someone from Vancouver – or from Seattle.

For most non-native English speakers, distinguishing more generally between American and Canadian accents is extremely difficult – Boberg compares it to telling the difference between two minor areas in Britain – but linguists have isolated some distinctive qualities that are helpful. A feature of Canadian speech called ‘the Canadian shift’ involves something called a ‘low-back merger’, which describes Canadians’ tendency to erase the difference between certain vowels that come from the lower part of the mouth – ‘lot’ and ‘thought’, for example. Canadians in Windsor pronounce the word ‘stack’ in the same way that Americans pronounce the word ‘stock’ in the neighboring US city of Detroit.

According to Boberg, people casually trying to identify a Canadian accent should focus two sounds. Canadians do something called ‘Canadian Raising’, meaning that they pronounce some two-part vowels (known as dipthongs) with a higher part of their mouths than people from other English-speaking regions – this is what causes the ‘ou’ sounds in words like ‘out’ and ‘about’ to be pronounced something like ‘oot’ and ‘aboot’.

The most telltale sound, according to Boberg, is Canadians’ tendency to use the ‘æ’ sound in words like ‘mantra’ and ‘pasta’, unlike the lower (more ‘oh’-sounding) pronunciation favored by Americans. If someone says that, Boberg explains, it is almost impossible that they come from anywhere except Canada. The sound, he adds, “makes Americans’ skin crawl”.

In recent years, academics have noticed that the Canadian accent is undergoing a curious change. Known as ‘the Canadian vowel shift’, the vowels among a wide variety of Canadian demographics are becoming higher and pronounced further back in the mouth – bagel is turning into ‘bahgel’, shoes into ‘shahs’. The reasons aren’t clear, and despite the name of the shift, Canadians are not alone in undergoing the change: something similar is happening in parts of the US, including California (some people are describing this process as the ‘Valley Girl-isation’ of the Canadian accent). Other parts of the US, including some northern regions, aren’t experiencing the shift, so it may end up amplifying differences between the two accents rather than muddling them. 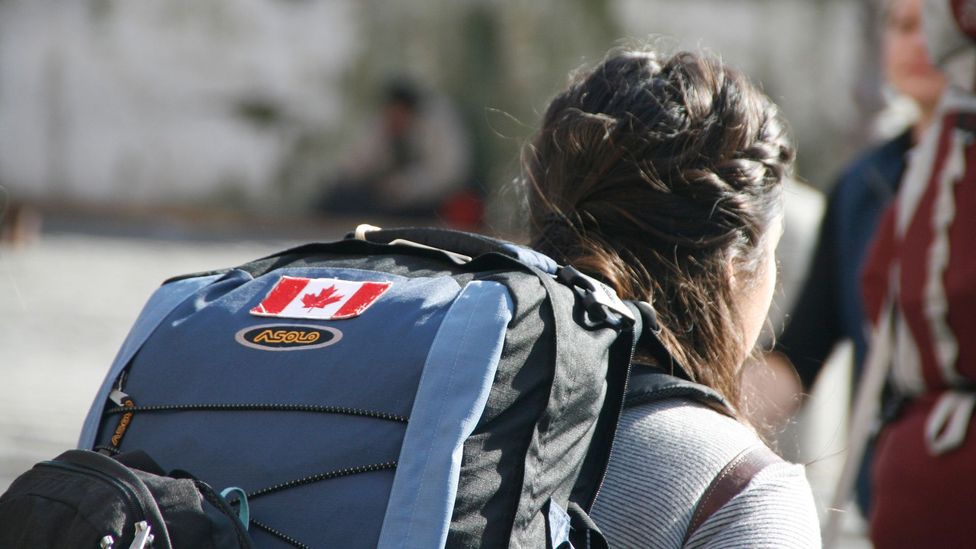 Canadian English is so similar to US English that Canadians traveling abroad often affix their flag to their backpacks to identify themselves (Credit: Alamy)

The fact that the Canadian accent has survived this long, despite centuries of close physical and cultural proximity with the US, is a testament to people’s attachment to their Canadian national identity. When new immigrants arrive in Canada, they still adopt distinctive Canadian patterns of speech – and that’s not likely to change any time soon.

As Boberg explains, there are two dynamics that generally determine how the members of a contemporary community speak: one is a person’s desire to be “global” and sophisticated, and the other is their desire to sound like a member of their own community. “There’s that conflict of not wanting to sound embarrassingly local, but not wanting to sound snobbishly global,” he says. Because people rarely want to go too far in one direction, this allows accents to evolve without fully disappearing. “Language is one of the few ways we have left of making statements of local belonging since we now all dress the same, we all watch the same movies.” And as long as both of those dynamics remain in play, Canadians will continue to sound like Canadians.