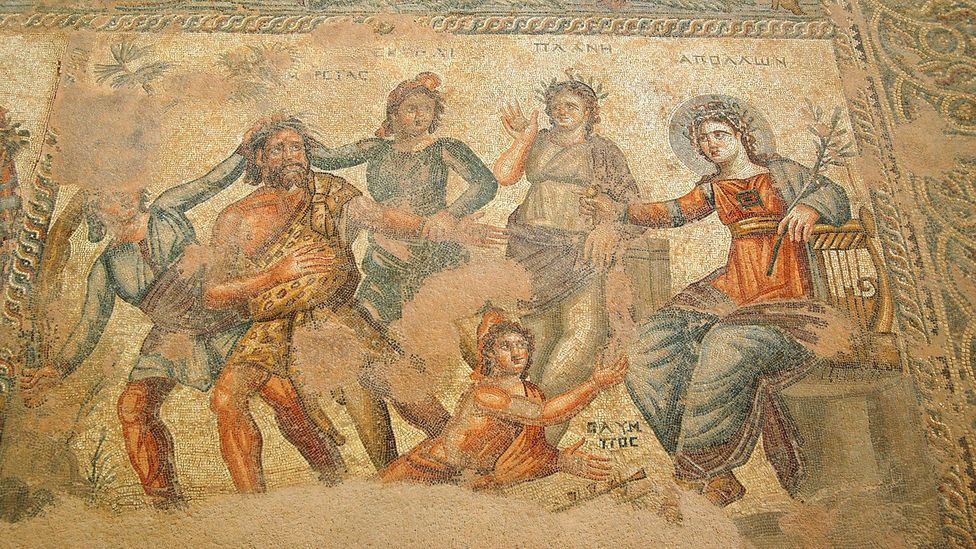 By Andrea Watson 18th October 2016
Men of antiquity worshipped Aphrodite by having sex with her temple maids at Paphos on Cyprus. Now the site is receiving new recognition, writes Andrea Watson.
I

In 2017, Paphos will enjoy the title of European Capital of Culture. Who would have believed that this holiday resort in Western Cyprus, a concrete jungle of  hotels, Chinese and Indian eateries, pubs, tired souvenir shops, pinball parlours and all the detritus of 1970s-style mass market tourism could win this honour? Even some local people were astonished.

What did the European Union, which determines the title, see in this bid? Scratch the surface – literally – and you have the answer. A chance discovery by a farmer ploughing land in 1966 brought to light a vast archaeological site near the harbour where glass bottom boats ply their trade.

What came out of the ground during excavations was a Graeco-Roman city of unsurpassed importance in Cyprus, with villas, palaces, theatres, fortresses and tombs – and one of largest Roman residences in the whole of the Mediterranean. 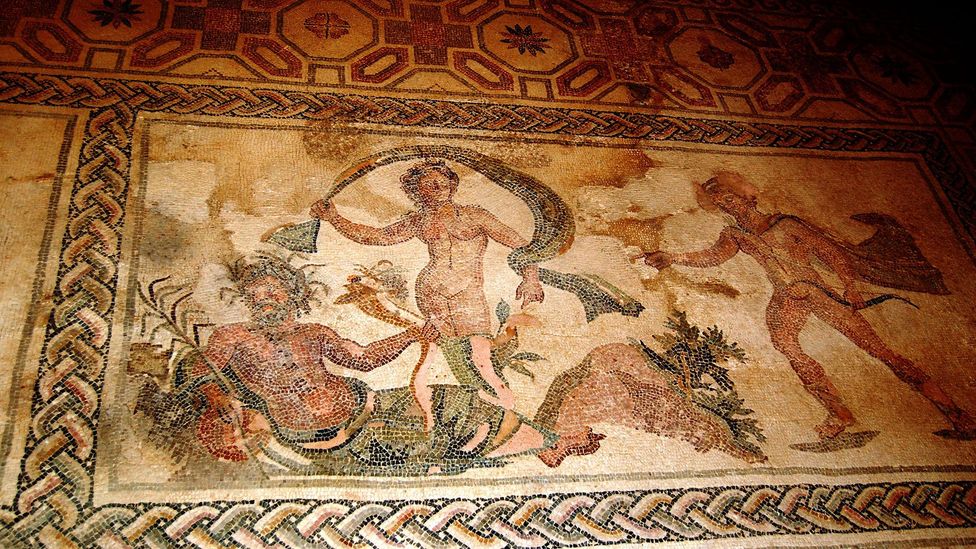 Only the ruins of Nea Paphos, as it was known in antiquity, remain. The violent earthquakes in the 4th Century that levelled much of Western Cyprus did, however, leave an immense, almost intact, treasure trove of mosaic floors. They are, says Unesco, which lists Paphos as a World Heritage Site, among the finest mosaic specimens in the world: "an illuminated album of ancient Greek mythology" depicting the stories of Thisbe and Pyramos, Echo and Narcissus, the rape of Ganymede, Apollo and Daphne and all the pantheon of gods in a breathtaking series of rooms.

Now open to visitors from all over the world, the archaeological park of Nea Paphos was one of two sites that Unesco assessed, the second being the temple of Aphrodite at modern day Kouklia, erected in 1200 BC, once the most important shrine to the Goddess of Love in the Mediterranean. 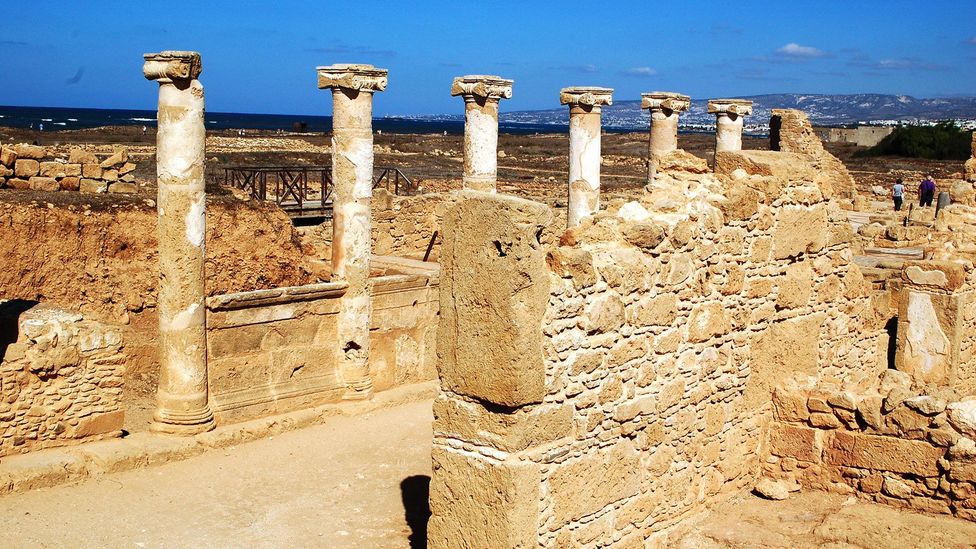 Almost nothing of the temple of Aphrodite at Nea Paphos remains, except for columns (Credit: Andrea Watson)

Today in Cyprus, Aphrodite's name is used to sell everything from car rentals to villas but in the pre-Christian era, she was called upon for a quite different reason: the hoards of pilgrims who came to her shrine would evoke her name before having intercourse with her temple maids.  It was an ancient form of sex tourism.

Sex with strangers was not only possible but obligatory

‘No, no!’ you may cry. But yes, the multitudes came not only to worship and pay homage to the Goddess but to enjoy the riotous festivals (banned by the Roman emperor Constantine in 400 AD) in her name – where having sex with strangers was not only possible but obligatory.

Modern guide books may be coy about the rites at Paphos but the Greek historian Herodotus, writing about Cyprus in the 5th Century BC, lays bare an astonishing history: "The foulest Babylonian custom is that which compels every woman of the land to sit in the temple of Aphrodite and have intercourse with some stranger at least once in her life." It applied to all women high and low, he says, though rich ladies often drove to the temple in covered carriages.

"A woman could not refuse payment. Once a stranger had made his choice and cast money into her lap she would be forced to have intercourse outside the temple." Ugly women might have to wait for years before someone came along, he adds impishly.

"The soil of Cyprus provoked men to lust" – Ludolph of Suchen

The same account is given in the monumental study of comparative religions The Golden Bough by James Frazer. "In Cyprus it appears that before marriage all women were formerly obliged by custom to prostitute themselves to strangers at the sanctuary of the goddess," he writes, adding that the same practices took place in Babylon, Byblos and Baalbek and in both Armenia and Turkey. 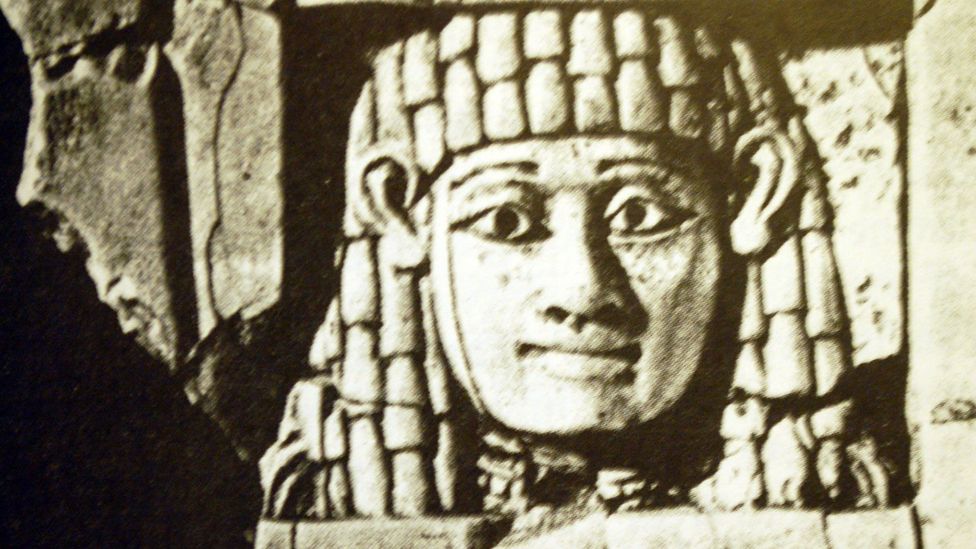 Sacred prostitutes wore ceremonial headscarves and were obliged to have sex with any man who gave her money (Credit: Andrea Watson)

Memory of the rituals – which probably died out very slowly despite the Roman ban – lingered for centuries. In 1336, a German priest Ludolph of Suchen described the pagan pilgrimages to Paphos with a warning that "the soil of Cyprus provoked men to lust."

Aphrodite or Venus, real or mythical and a conflation of ancient fertility goddesses, is said to have been the consort of the first priest-king of Cyprus. She is famous not only for her beauty but her many lovers. Sandro Botticelli's  well-known painting shows the lady, said to have been born in the sea spume created by Uranus's dismembered penis, being blown ashore by zephyrs. A nymph rushes to clothe her naked beauty with a billowing cloak of silk woven with flowers.

Even in the 21st Century, Cypriots are so in love with the myth that they tell you, in all sincerity, that she was born off the coast of Paphos. An obligatory stop on tourist routes, accompanied by the advice to ‘take camera’, is the rock Petra tou Romiou, where she emerged from the sea.  Click, click, and the bus is off again to the ruins of her temple nearby. 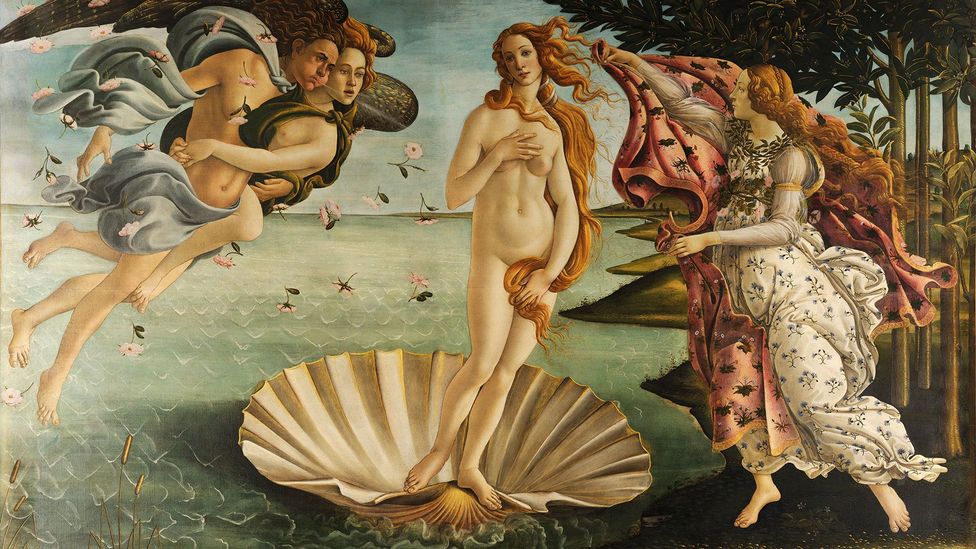 Aphrodite, who Botticelli depicted in his painting The Birth of Venus, was probably a combination of various fertility goddesses from around the Mediterranean (Credit: Wikipedia)

Here, in a souvenir shop I came across an eye-opening book by the painter and founder of the Cyprus College of Art near Paphos, the late Stass Paraskos. Famous for being the last artist in Britain to be found guilty of obscenity, he naturally did not shy away from his island's history. Mixing fact and fiction in Aphrodite, The Mythology of Cyprus, Paraskos invents a pilgrim to bring an eye-witness account of the spring festival of Aphrodisia including the rites, sacrifices and  mystical unions with the Goddess, all intermingled with the realities of finding a room and dodging thieves and prostitutes among the throngs of Greeks, Egyptians, Persians and Philistines. The account is based on authentic sources and the book ends with surviving traces of the Aphrodite cult in modern Cyprus.

Virtually no trace of the temple remains but Homer's description in the Iliad matches a Roman coin from around 200 AD excavated at Kouklia and now in the British Museum. It depicts an open-sided stone building with votive pillars encasing a vast conical stone – the ancient representation of the goddess of fertility. The site’s museum – once a crusader manor house – now contains this phallic monolith,  blackened by the custom of local woman to anoint it with olive oil, well into modern times.

The site today also has a copy of a beautiful mosaic of Leda baring her bottom to the lustful Zeus disguised as a swan (the original is in the Cyprus Museum).

The hills where Ares killed Adonis while hunting – both were lovers of  Aphrodite – no longer echo with the call of hounds and cymbals but the quiet thwack of golf clubs wielded by players from the Aphrodite Hills Hotel.

And it's the enduring power of this name that has secured the EU’s Capital of Culture title for Paphos and had it listed as a World Heritage Site. Unesco’s stipulation for the latter honour is that it can only be given to sites of "outstanding universal value". Nea Paphos and Kouklia, through their association with a figure who has inspired writers, poets and artists throughout human history, clearly tick that box.   Thanks to Aphrodite, Paphos is looking forward to a rebirth that will build on the astonishing ancient culture that lies just under the surface of modern Cyprus.