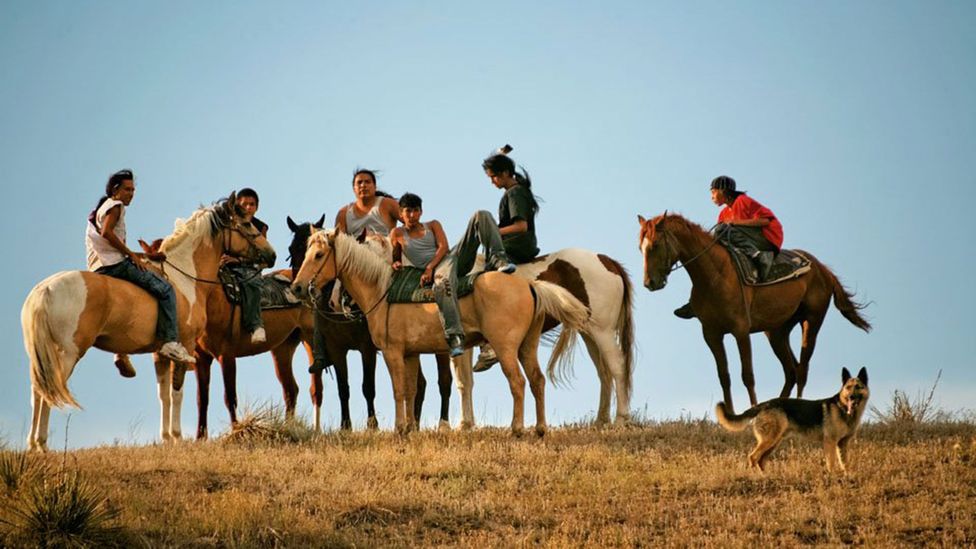 By Fiona Macdonald 7th November 2016
A new book mines the archives of National Geographic magazine to pull together a pictorial history of the US spanning a century. Fiona Macdonald takes a look. 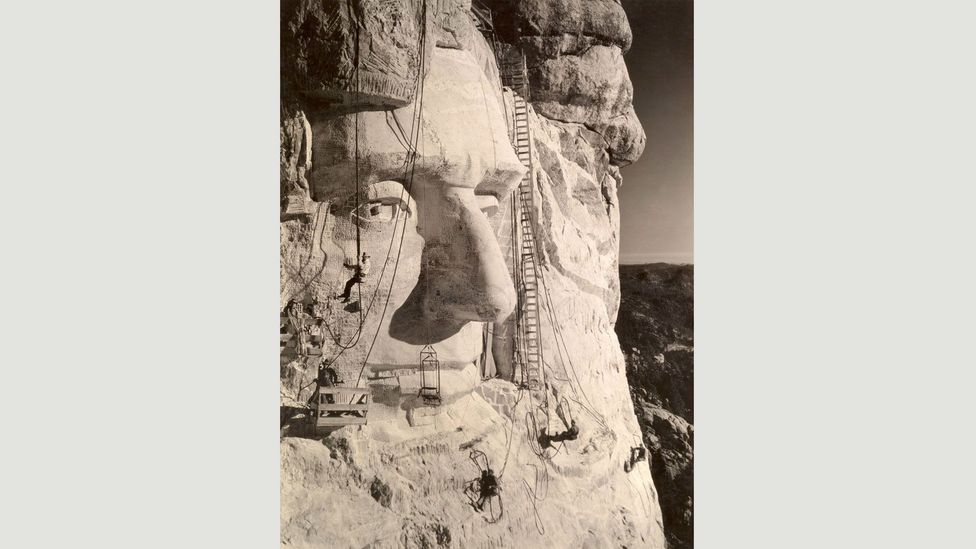 “There was an aspirational aspect to the way National Geographic viewed and covered America.” An essay in [a new Taschen book of images from National Geographic’s archives](https://www.taschen.com/pages/en/catalogue/photography/all/01164/facts.national_geographic_the_united_states_of_america.htm) quotes the magazine’s director of photography in the 1990s, Thomas Kennedy. The essay’s author David Walker explains how this filter extends to the very first shoots. “For most of the 20th Century, the impulse of editors was to portray America’s best self-image, as seen through the lens of white middle-class and middle-American sensibilities,” he writes. “National Geographic photography reinforced the idealised narratives of American history and culture that were familiar to almost every schoolchild, starting with black-and-white images in the early 20th Century that celebrated the nation’s industrialisation and westward expansion.” This photo – taken in the 1930s by Charles D’Emery – shows Lincoln’s face emerging from stone at South Dakota’s Mount Rushmore. Sculptor Gutzon Borglum and his crew began carving the monument in 1927; it was completed in 1941 by Borglum’s son. (Credit: National Geographic Creative) 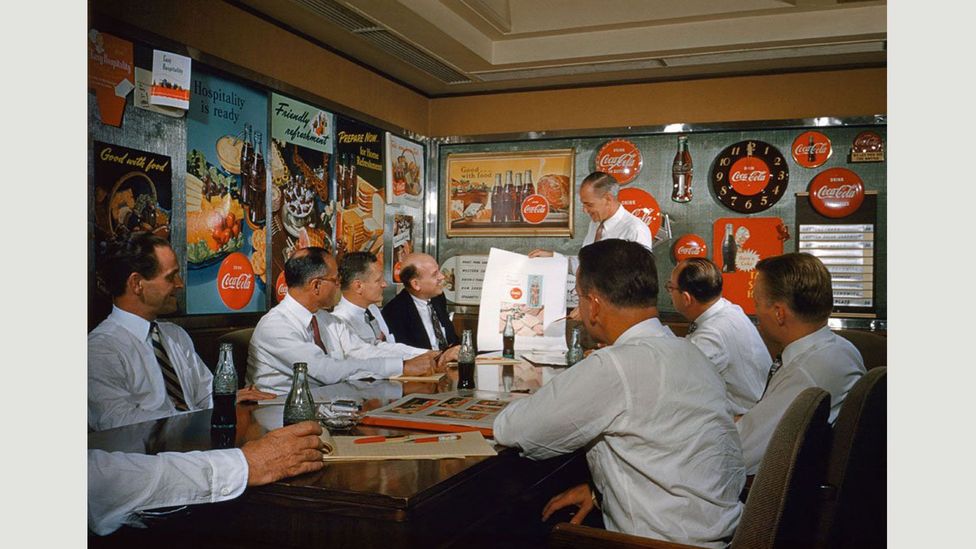 Gilbert Hovey Grosvenor was appointed the first full-time editor of National Geographic magazine in 1903, and continued in the role until 1954. In the new book, called National Geographic, The United States of America – which is published on 12 December – Walker claims that “he took what had been a dry scholarly journal with fewer then 1,000 subscribers, and transformed it into an icon of US culture. The magazine had more than 2 million subscribers by the time he resigned.” Grosvenor offered an antidote to the greyness of life in the Great Depression and World War Two, and captured the exuberance of the postwar years. “He took an upbeat, laudatory view of the nation,” writes Walker. That included staged photographs. This image, taken by Howell Walker in 1954, shows Coca-Cola ad men mulling their next campaign at company headquarters in Atlanta, Georgia. While giving the feel of an advertisement, the set-up photo can still reveal much about the time it was taken. “The photograph is as fascinating as a historical diorama for how much the photographer has managed to pack into one frame about America’s postwar icons and ideals,” writes Walker. This image, he says, “is a trove of information and symbols about consumerism, corporate enterprise, and white male hegemony of the era. Geographic photographers were indeed informing readers about America, but they were also using advertising techniques of the day to sell it”. (Credit: National Geographic Creative) 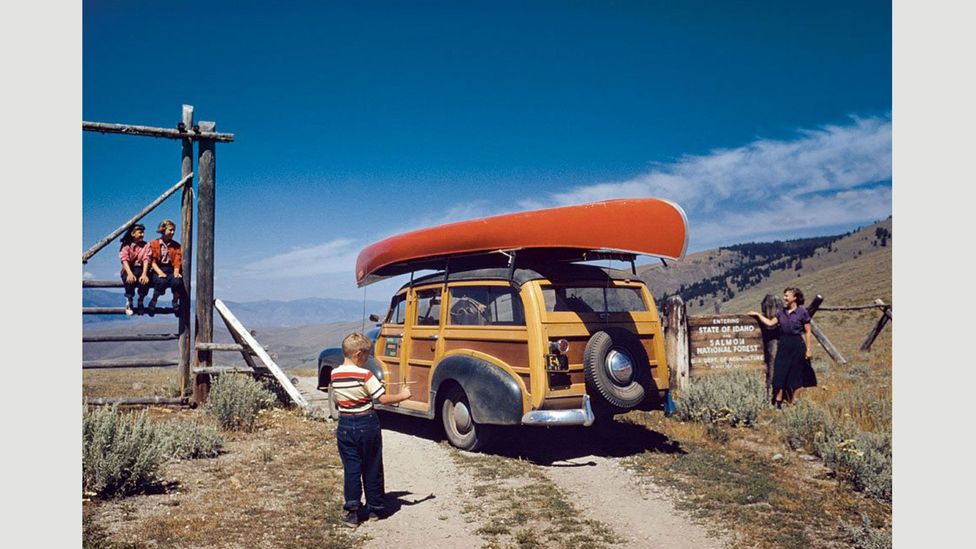 The average American in the postwar years, argues Walker, “worked long hours in factories and on farms, and lacked many of the consumer luxuries we now take for granted… National Geographic photographers roamed the country, and brought homebound readers along for sightseeing and adventure.” They also harnessed the new Kodachrome palette, particularly red, which reproduced well. “To the chagrin of later generations of photographers, several photographers of the 1940s and 1950s even carried red shirts in their camera bags for use as visual props,” writes Walker. William Ralph Gray took this photo while on assignment for National Geographic magazine in 1952, at the edge of Idaho’s Salmon-Challis National Forest. It was carefully posed, set on the Lemhi Pass at the entrance to Idaho from Montana: the Lewis and Clark expedition had travelled through the same pass a century-and-a-half earlier. “The photograph makes for a colourful narrative that is as clear, aspirational, and visually enticing as a magazine advertisement,” writes Walker. “A middle-class family with a pioneering spirit is eagerly anticipating a wilderness escape.” It is, he claims, “an invitation to travel vicariously”. (Credit: National Geographic Creative) 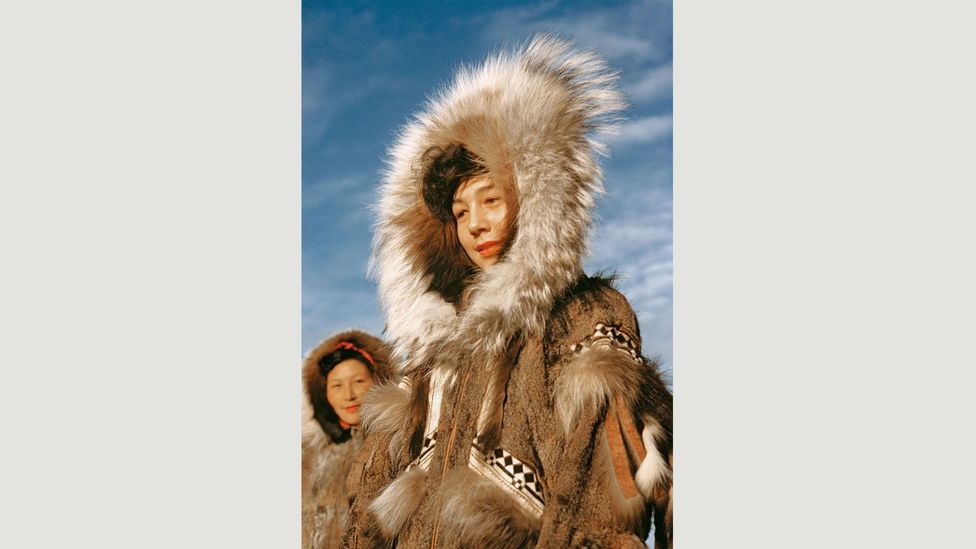 The magazine’s approach was different from other photo-led publications of the time, such as Life, which focused on social documentary. Instead, Walker writes, National Geographic “offered readers a temporary escape from the struggle and monotony of everyday life”. Its view of the US was particularly rose-tinted. “Manifest Destiny, the 19th-Century narrative of the inevitability of American territorial expansion and dominion, was a theme that echoed through National Geographic photography for decades,” he says. “The magazine – and its readers – loved the mythology of the American west.” Another frontier region is among the most-photographed state in the magazine’s archives. Alaska “just might hold the record for National Geographic coverage”, writes Joe Yogerst in the new Taschen book. “Over the years, the state has appeared in 390 articles, 51 books, and on 62 magazine covers. Alaska was one of the earliest places featured in the magazine, a July 1890 story that detailed the voyage of the USS Thetis through Alaskan waters”. The state continued to exert a pull for the following decades. Yogerst pins its appeal to its wildness. “Alaska is truly the nation’s Last Frontier,” he writes. “Not so much because it lies on the outer edge of the continent – modern air travel makes it less than half a day away from just about anywhere in the nation – but rather because of the people who dwell there.” Taken by W Robert Moore in 1956, this photo shows the winner of the 1955 Miss Arctic Circle contest at the annual Fourth of July celebration in Kotzebue, Alaska. (Credit: National Geographic Creative) 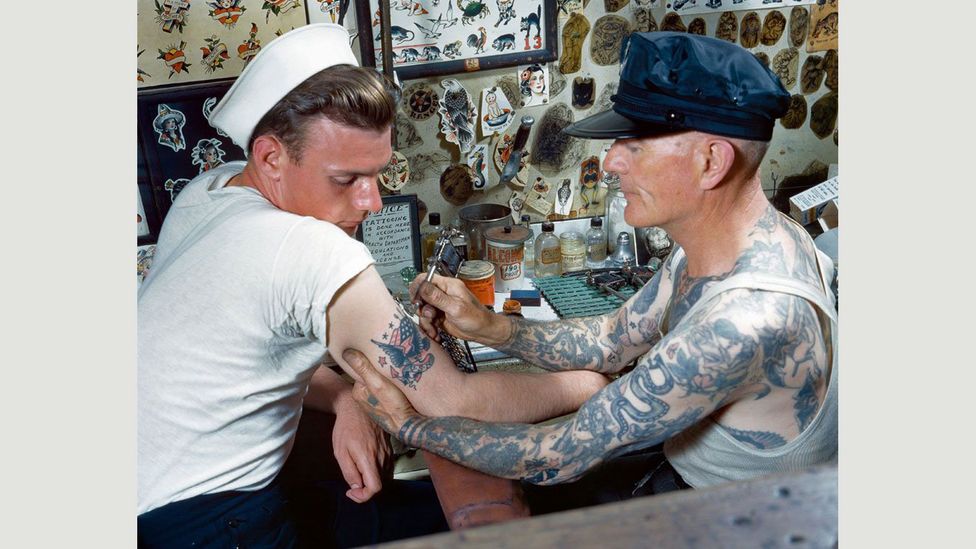 Paul L Pryor took this photo of a sailor in Norfolk, Virginia in 1939. Yogerst points out the state was the location of the continent’s first permanent English settlement and the deciding battles of both the Revolution and Civil War. “Lying roughly midway along the Atlantic Seaboard, Virginia has long occupied a central role in the American drama. And not just in a geographical sense,” he writes. “Ideas and ideals that sprang forth from Virginia aided the creation of the new nation, abetted the dissolution of that nation into Civil War, and later helped propel the United States to global power.” The straightforward snapshots of National Geographic photographers managed to capture more than they appeared to at first glance. “Virginia became a key player in the conflicts that most define this nation,” writes Yogerst. “The final shots of the American Revolution were fired at Yorktown, the final words of the Civil War uttered at Appomattox by another son of the Old Dominion, General Robert E Lee. The shipyards of Newport News and dockyards of Norfolk helped the United States to become a modern naval power, while military tactics developed at the Pentagon and Quantico turned the tide of battle at Belleau Wood in World War One, Iwo Jima in WWII, and other foreign fields.” The state plays a military role beyond the battlefield: “Many of the fallen heroes found their last rest at Arlington National Cemetery.” (Credit: National Geographic Creative) 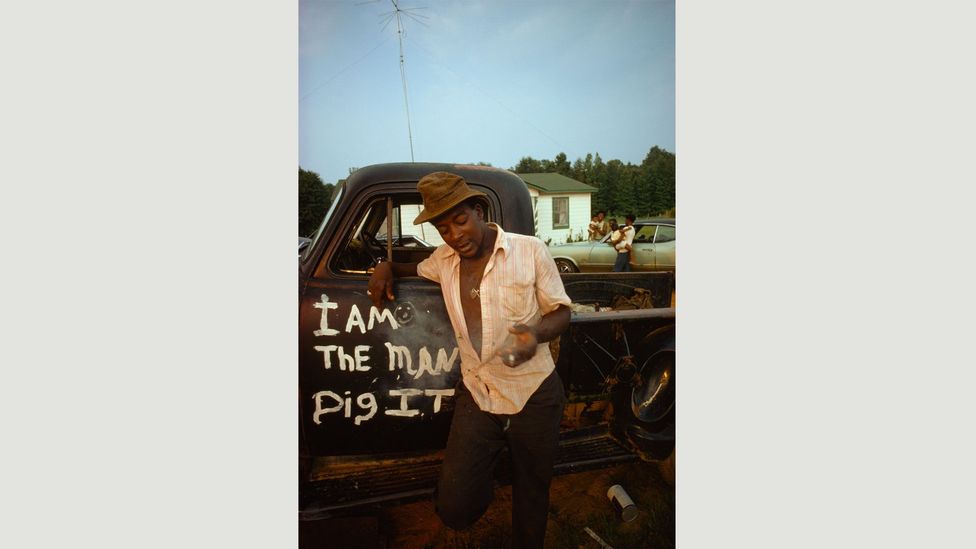 By the end of the 1960s, the magazine’s unabashedly positive approach was beginning to show cracks. “By the early 1970s, American culture had shifted under the influence of nearly three decades of postwar economic prosperity, the rise of mass media, social unrest surrounding the Civil Rights Movement, the Vietnam War, and the rise of counter-culture,” writes Walker in the new book’s essay. “Domestic travel was less of a novelty, and Americans were better informed than they had once been. National Geographic had enjoyed great success with ‘gee-whiz’ photographs, but it was now under pressure to show its readers something new, or at least find new and more sophisticated ways to show what was familiar.” This photo was taken by Dick Durrance II in 1975. The caption in the book reads: “Reflecting a changing Alabama, the door of Chester Williams’s truck makes a proud statement that might have been unsafe to assert just a few years earlier.” Robert Gilka was appointed director of photography in 1963. “He favoured a more documentary approach, and hired talented newspaper photographers to achieve this,” writes Walker. “Gilka set high standards, sending photographers off to shoot stories without directing or posing subjects.” As a result, from the 1960s onwards, images in National Geographic magazine changed – in tone and subject matter. “Photographs became richer and more complex in terms of their content, composition, and use of colour. The messages and meanings were more subtle, engaging readers on deeper emotional and intellectual levels.” (Credit: National Geographic Creative) 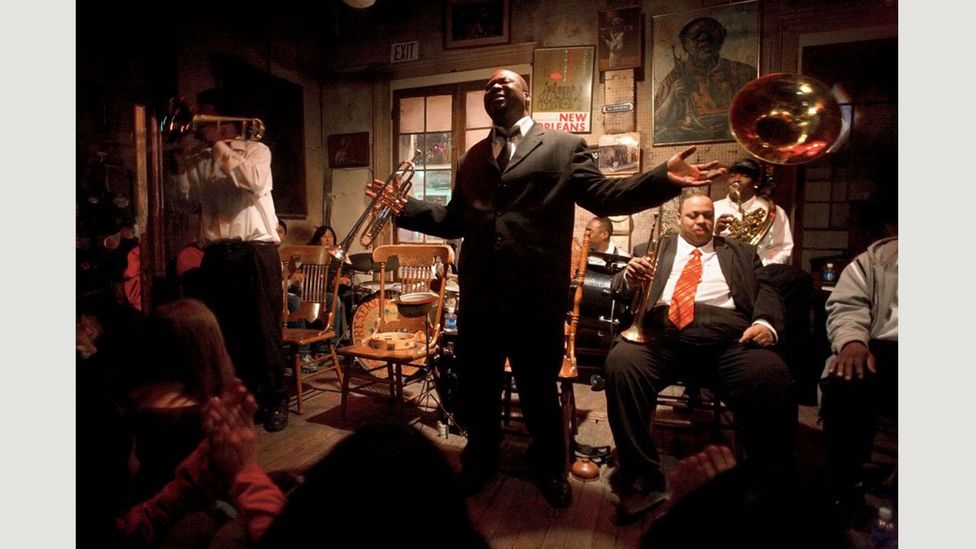 “I doubt if there is a city in the world, where the resident population has been so divided in its origins, or where there is such a variety in the tastes, manners, habits, and moral codes of the citizens,” wrote Frederick Law Olmsted, the landscape architect and journalist, after an 1856 visit to New Orleans. Founded in 1718, the city became the capital of a territory that had been ruled by the Spanish and French before it became part of the US. Local culture also absorbed African and Caribbean influences through slavery. “The state’s Creole people blend French, Spanish, Afro-Caribbean, and other influences into a distinctive culture most evident in New Orleans,” writes Yogerst. “The Cajuns, on the other hand, are descendants of the Arcadian French settlers expelled from eastern Canada by the British in the 18th Century; they dominate the rural areas and smaller cities of southern Louisiana.” Tyrone Turner photographed trumpeter Kenneth Terry and the New Birth Brass Band at Preservation Hall in Louisiana for an August 2007 issue of National Geographic, two years after Hurricane Katrina caused devastating flooding in the area. The article revealed how people there had rebounded from the disaster. “The sinking city faces rising seas and stronger hurricanes… yet people are trickling back to the place they call home, rebuilding in harm’s way.” The trumpeter in this image told National Geographic writer Joel K Bourne Jr “What we do in New Orleans you can’t find anyplace else. The jazz we play comes from the soul.” (Credit: National Geographic Creative) 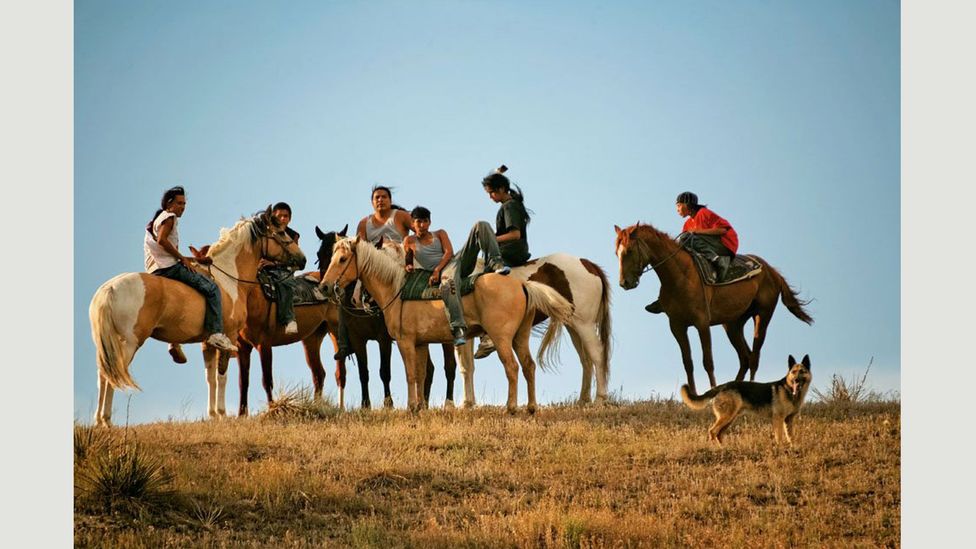 Walker describes National Geographic magazine’s early depictions of Native American people as “fraught”: “the magazine’s photographers frequently represented them as a curiosity for tourists, and reinforced prevailing stereotypes of ‘noble savages’… while quietly over-looking a lot of troubled history and its tragic consequences.” But during the 1970s and 1980s, younger photographers challenged the publication’s conservative values. “This new generation shot images of a changing America, warts and all, and pushed editors to run them. In small doses, images of pollution, poverty, urban decay, and other social ills started making their way into the magazine from the 1970s onward.” They also challenged the magazine’s pictorial aesthetic. “Against plenty of resistance from traditionalist editors, images that were more metaphorical and ambiguous made their way into the magazine during the 1980s and 1990s,” argues Walker. Such imagery is now a regular feature. In 2012, Aaron Huey, took this photo as Oglala Lakota riders paused during a day of activities on the Pine Ridge Indian Reservation in South Dakota, commemorating the 1876 defeat of Lt Col George Armstrong Custer. Yet National Geographic has not transformed beyond recognition. “A venerable and formerly insular institution that built a publishing empire on its own brand of straightforward, informative photography has cross-pollinated with photographic influences outside its yellow borders,” writes Walker. “But the new has not entirely subsumed the old. Threads of the traditional and contemporary – the literal pictures and the lyrical, the didactic, and the impressionistic – now intertwine in the pages of National Geographic – and online, of course – creating a rich, new aesthetic that adds up to more than the sum of the individual strands. Just like the US itself.” (Credit: National Geographic Creative)