By Nicholas Barber 15th December 2016
Alfonso Cuarón’s dystopian thriller is one of the 21st Century’s most acclaimed films – and its version of the future is now disturbingly familiar. Nicholas Barber looks back.
N

Nothing goes out of date more quickly than films set in the future. Big-screen visions of tomorrow always reflect the era in which they were made – hence the disco outfits in Flash Gordon. Most soon become quaint relics rather than uncanny prophecies of the shape of things to come. But then, on the other hand, there is Children of Men. Alfonso Cuarón’s feverish dystopian chase thriller is set in a decade’s time, in 2027, but it also came out a decade ago. By now, we should be chuckling at how far off-target its predictions were, both in their overall picture and their background minutiae. Instead, it’s tempting to ask whether Cuarón had access to a crystal ball.

Children of Men is one of the most acclaimed films of recent times: BBC Culture’s poll of international critics placed it as the 13th best film of the 21st Century. Partly, that’s because of the shocking immersive style of its brilliantly choreographed action sequences, which were shot in long unbroken takes. It’s also because of how believable its depiction of a cluttered and grimy near-future was, but if Children of Men seemed accurate 10 years ago, it seems a lot more accurate today. 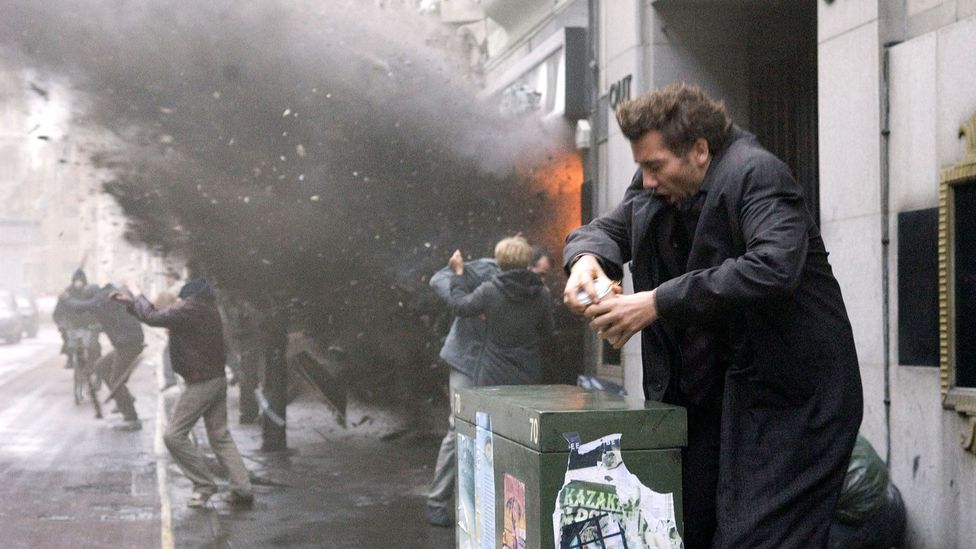 The bomb blast that opens Children of Men is horribly credible – it was shot on location in London (Credit: Alamy/Universal Pictures)

Very loosely based on a 1992 novel by the great crime author, PD James, the film tells the story of Theo (Clive Owen), a civil servant who used to be a political activist, but who now trudges through life in an alcoholic stupor. His radical spirit is rekindled when he is contacted or rather kidnapped by his long-lost love, Julian (Julianne Moore), the leader of an anti-government resistance movement. She asks him for a set of “transit papers”, thus setting him on a path which will lead either to his redemption, or his death – or both.

If the plot harks back to two classic fictions of the 1940s, Casablanca and Nineteen Eighty-Four, the setting is breathtakingly contemporary. Cuarón doesn’t use captions or speeches to explain what has happened to civilisation, but, judging by the old newspapers we glimpse, society has been rocked by climate change, pollution, nuclear accidents, social division, and terrorist bombings. Nevertheless, all of Britain’s troubles have been blamed on asylum seekers, who are locked in cages, and then bussed to hellish shanty towns. “Poor fugees,” says Theo’s hippy friend Jasper (Michael Caine). “After escaping the worst atrocities, and making it all the way to England, our government hunts them down like cockroaches.”

Ring any bells? Mass migration was a major issue in 2006, so it’s not surprising that it should be so central to Children of Men. But, a decade ago, no one had predicted the Syrian refugee crisis, or that the US’s President-elect would propose registering Muslims, or that the UK would vote to leave the European Union after a campaign that focused on immigrant numbers. Today, it’s hard to watch the television news headlines in Children of Men without gasping at their prescience: “The Muslim community demands an end to the army’s occupation of mosques.” “The homeland security bill is ratified. After eight years, British borders will remain closed. The deportation of illegal immigrants will continue.” In 2006, all of this seemed plausible enough, but perhaps a little strident, a little over-the-top. 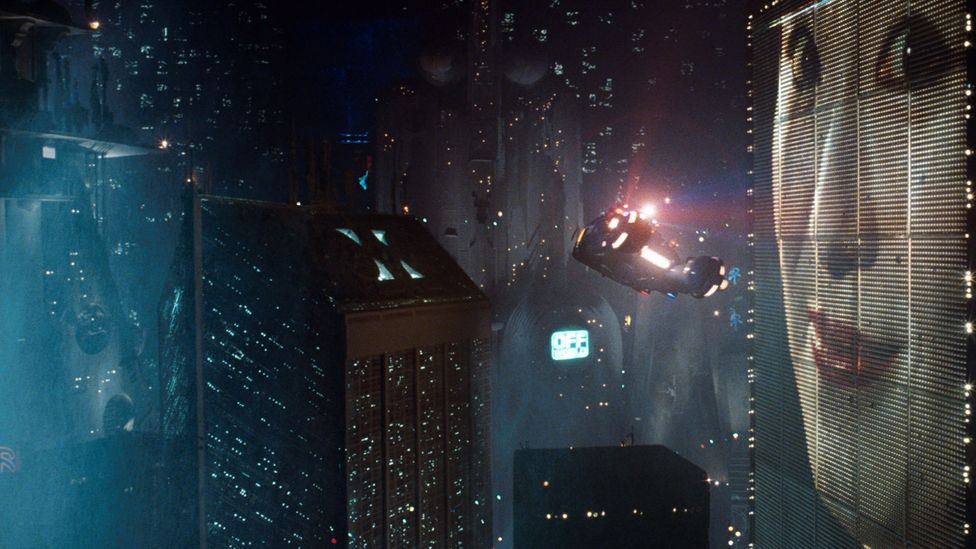 Politics aside, the reason why Children of Men has barely aged in 10 years is that Cuarón didn’t put his characters in an outlandishly artificial landscape, but in an essentially familiar one. “Rule one in the film is recognisability,” Cuarón explained in a making-of documentary. “We didn’t want to do Blade Runner. Actually, we talked about being the anti-Blade Runner in the sense of how we were approaching reality. That was difficult for the art department because I would say, ‘I don’t want inventiveness, I want references to real life.’”

Rule one in the film is recognisability – Alfonso Cuarón

The “anti-Blade Runner” comment is slightly harsh, in that the rain-washed, multicultural metropolis of Ridley Scott’s film, which is set in 2019, holds up better than most future cities. But you can see what Cuarón means. Children of Men doesn’t have any androids or spacecraft. The sparse futuristic embellishments, such as the video billboards, are already moving from science-fiction to science-fact.

The film’s battered cars may be different from ours, but they don’t hover above the road, and they don’t have the neon lights or the humming engine noise that are sci-fi staples. The clothing in Children of Men is much the same as it is now, too. In most respects, the film’s world resembles the worlds of 2006 and of 2016, only shabbier. My own favourite detail is Theo’s faded London 2012 Olympics sweatshirt, even if the logo created by the film’s costume designers is classier than the atrocity which was used for the actual 2012 Games.

Among the period details, the one blatant departure from reality works in the film’s favour: in Children of Men, no one uses mobile phones or logs onto the internet. It’s impossible to believe that that will be true in 2027, but because smartphone technology advances so rapidly, any phones which appear in a science-fiction film are always distractingly not-quite-right. By missing them out altogether, the film seems less dated, not more. 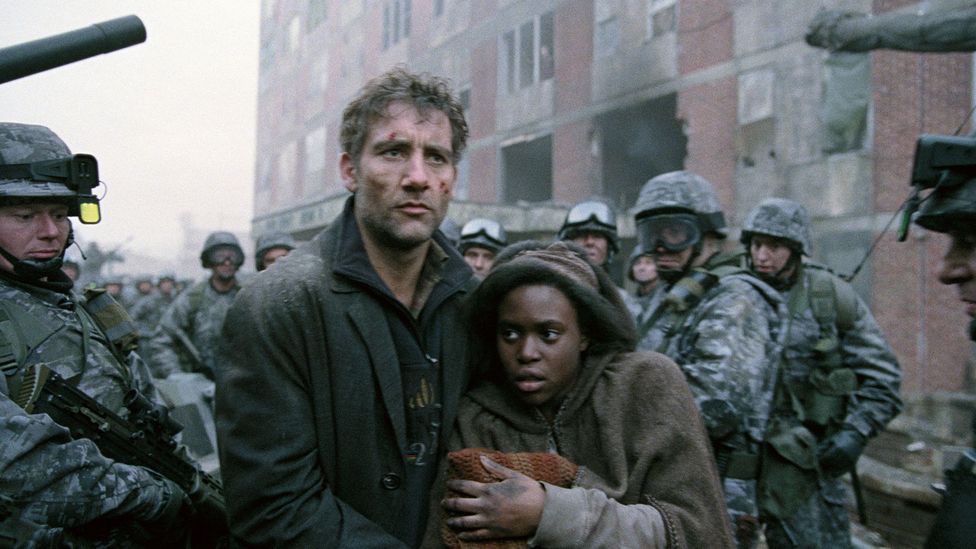 The film’s central premise, a fertility pandemic where no child has been born in 18 years, is one concept that isn’t familiar (Credit: Alamy/Universal Pictures)

But Cuarón’s most effective decision was to shoot so many scenes on the streets of London, without adding much except graffiti, litter and all-round squalor. (And, speaking as a Londoner, I haven’t noticed the capital getting any cleaner over the past decade.) This decision pays dividends in the nerve-jangling bomb blast sequence which opens the film. The scene was shot on Fleet Street in central London, with St Paul’s Cathedral visible in the distance. In 2006, it was an astonishing logistical achievement. If the same sequence were being shot today, it would probably be conjured up on a computer instead. But while digital backdrops tend to look artificial with a few years’ hindsight, the explosion at the start of Children of Men is still horribly credible.

The one aspect of the film that doesn’t seem to be coming true is its central premise. The idea is that no human beings have been born in the last 18 years, so when Theo meets Kee, an African woman who is miraculously pregnant, he has to protect her from the various groups who want to exploit her condition. Obviously, we know that this infertility pandemic hasn’t happened: in Children of Men, the youngest person on the planet was born in 2009. But even as a concept, this particular one doesn’t resonate with our current anxieties, because overpopulation is more worrying than population decline.

Deliberately vague about how Kee’s pregnancy can change the fate of the human race, Cuarón presents her as a fuzzy symbol of hope rather than as an individual who might have a significant effect on geopolitics. Whenever the film is about her, then, it stops being a vivid dispatch from the imminent future, and starts being a mystical sci-fi parable. But maybe that’s for the best. The rest of Children of Men is so uncomfortably close to reality that its one glimmer of fantasy comes as something of a relief.