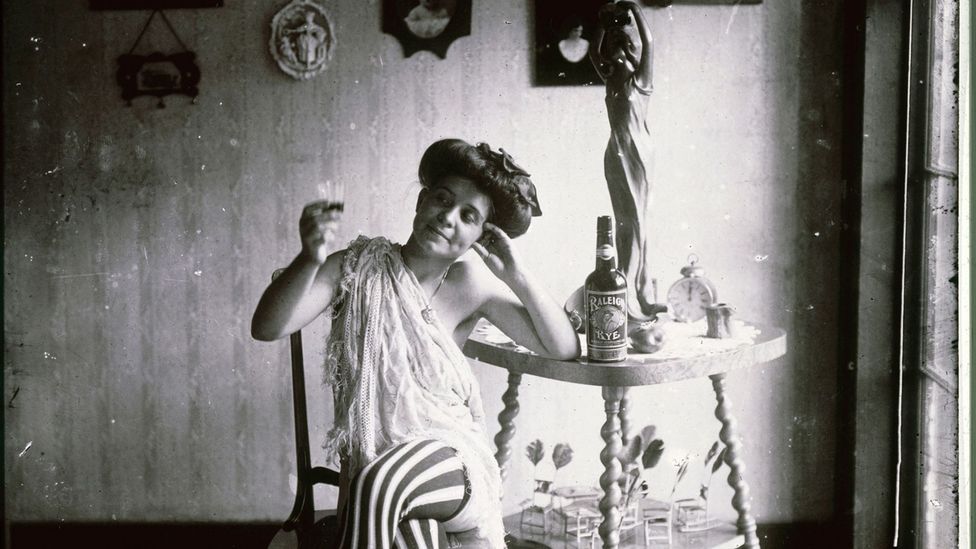 The five members of the band took the lift to the 12th Floor of the Victor Talking Machine Company’s building on 38th Street in New York City. They were known for playing while wearing white shirts with top collars buttoned and no neckties but black dinner jackets with shiny lapels. The song this quintet would play for the waiting microphones was silly, and not rendered with the greatest of technical skill – its most memorable moment is when a clarinet imitates the sound of a rooster; a cornet, a whinnying horse; and a trombone, a cow. The Beatles playing Ed Sullivan this was not. And yet this was as significant a moment in US musical history. The date was 26 February 1917, and this novelty song, Livery Stable Blues by the Original Dixieland Jass Band, was the first jazz recording. 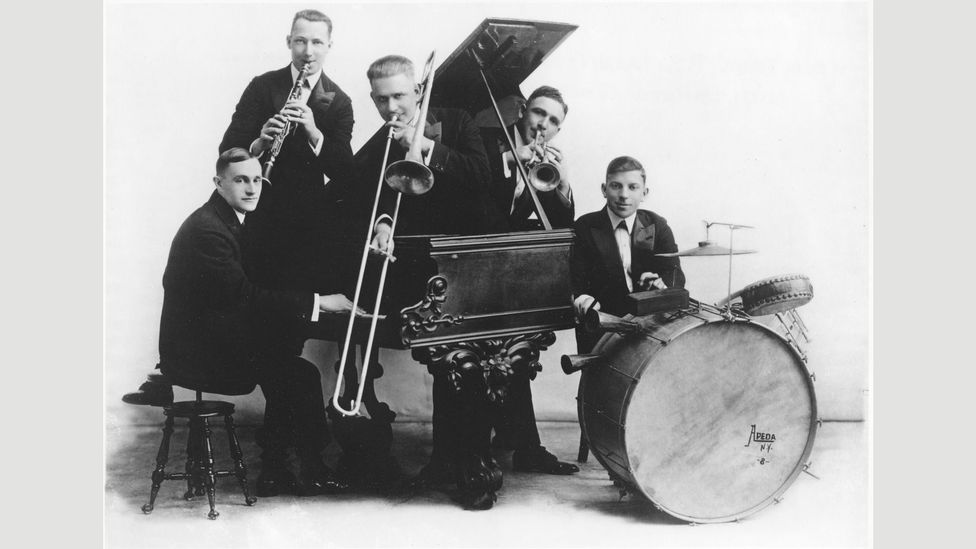 That would be a remarkable milestone in its own right, but embedded into Livery Stable Blues are issues that have haunted jazz, and popular music as a whole, ever since. We all know the debates, from Elvis to Taylor Swift, over white copycats appropriating the sound and style of black musicians. When they recorded Livery Stable Blues the all-white Original Dixieland Jass Band borrowed to the point of plagiarism from the African-American musicians they’d heard in their native New Orleans. We follow the legal challenges over who wrote Stairway to Heaven or whether Blurred Lines should have listed Marvin Gaye as a co-author. Livery Stable Blues, one of the first true hit singles, selling over one million copies at a time most still preferred to buy sheet music over recordings, inspired its own attribution battle. We’ve all heard the arguments, usually from very concerned parents, about what defines good taste or aesthetic achievement in popular music. The judge who presided over the lawsuit about who wrote Livery Stable Blues ultimately ruled that since the song was in bad taste and composed by people who couldn’t actually read or write sheet music it would be remanded to the “public domain” with no writer attributed at all.

It was spelled 'J-A-S-S.' That was dirty, and if you knew what it was, you wouldn't say it in front of ladies – Eubie Blake

More than other forms of popular music Jazz is particularly fraught with these kind of debates, but some of the most heated arguments among jazz aficionados are even more fundamental: what qualifies as jazz? Does jazz have some essential ingredient? Where does the term “jazz” even come from? One hundred years after the first jazz recording, the answers remain elusive, but the story of Livery Stable Blues shows how early the questions that still surround the genre were raised.

‘Jazz’ was named the Word of the 20th Century by the American Dialect Society, which is remarkable since we don’t actually know for sure from where the term originates. One of the most striking features of jazz to its earliest listeners was its speed, its sheer energy. Dating back to 1860 there had been an African-American slang term, ‘jasm’, which means ‘vim’ or ‘energy’.  On 14 November 1916, the New Orleans Times-Picayune newspaper referred for the first time to “jas bands”.  That particular spelling suggests “jas” could have come from jasm. Or perhaps it referred to the jasmine perfume that prostitutes in New Orleans’ famed Storyville red light district often wore – jazz music had developed, in part, as the music played in brothels. Early jazz pioneer Jelly Roll Morton, whose own name was a euphemism for sex, first developed his own style playing piano in these ‘sporting houses’ and to get extra tips he’d peek at a prostitute and her client through a peephole and time his playing with the pace of their revels. 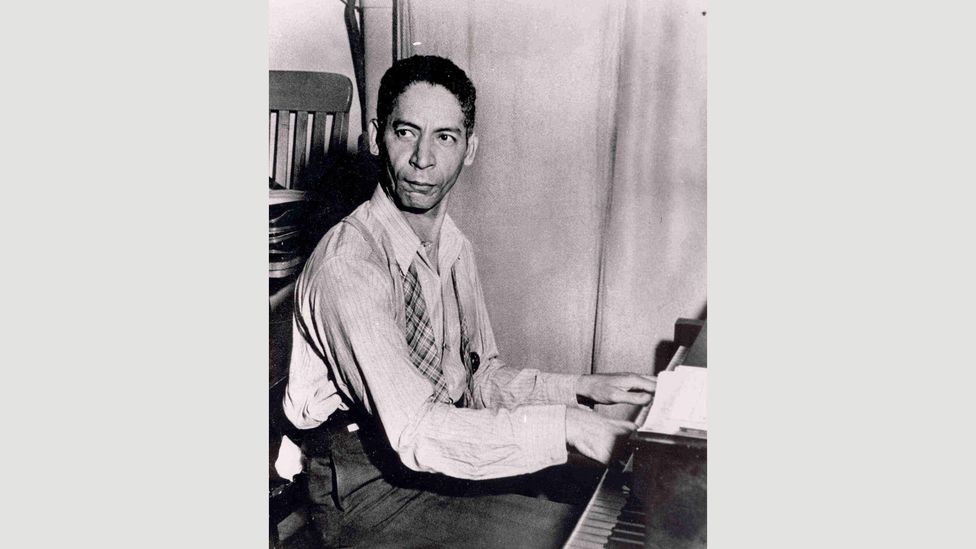 In 1915 Jelly Roll Morton published jazz’s first sheet music – he lived a wild life, playing piano in brothels as a teen and replacing a front tooth with a diamond (Credit: Alamy)

The Original Dixieland Jass Band itself shows the etymological mystery of jazz. Like ‘jas’, ‘jass’ probably has a sexual connotation, as a reference to a woman’s backside. Musician Eubie Blake said, in an interview with National Public Radio before his death in 1983: “When Broadway picked it up, they called it 'J-A-Z-Z.’ It wasn't called that. It was spelled 'J-A-S-S.' That was dirty, and if you knew what it was, you wouldn't say it in front of ladies." Or perhaps by the time ‘jass’ made it to New York City from New Orleans, bandleaders were simply tired of pranksters scratching off the ‘j’ from their posters. A few months after that recording of Livery Stable Blues, the fivesome would change their name to the Original Dixieland Jazz Band for good. 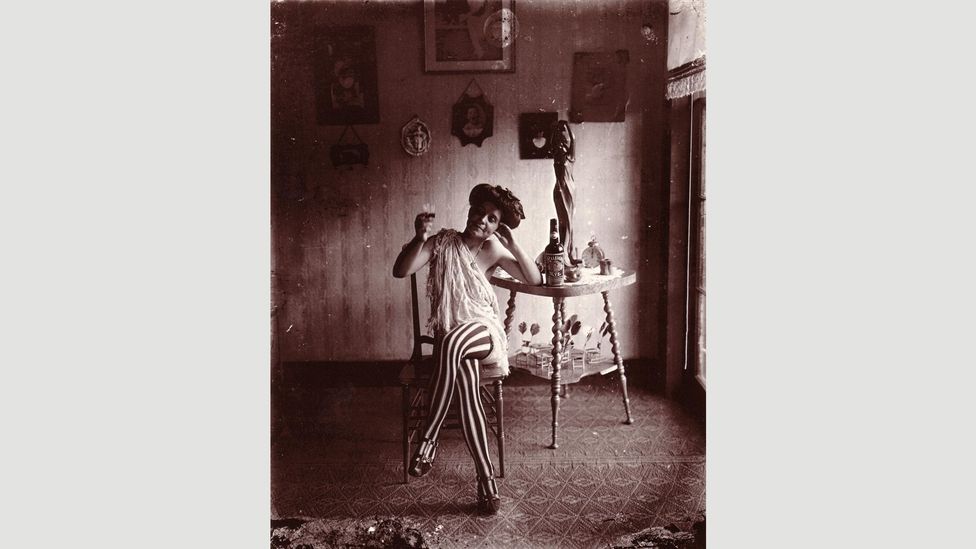 Livery Stable Blues also helps answer the question ‘What is jazz?’ by pointing to its roots. The song is structured around three chords and into 12 bars, like virtually all blues songs emerging from the African-American tradition. Its barnyard sounds connect it to the setting of the work songs black field labourers would sing. Its habanera beat, common to so much of jazz, reflects the influence of bouncy Caribbean melodies on New Orleans music – there were several ferries arriving in New Orleans from Havana every day in the early 20th Century. Its repetition indicates the call-and-response tradition of black Baptist churches. The clarinet, cornet and trombone in its arrangement reflect the influence of march music, which was wildly popular in New Orleans during and after the Civil War and resulted in an excess of brass and woodwind instruments floating around the city for would-be musicians to play. Its piano comes from the tradition of ragtime, the musical form that directly proceeded jazz. And its sense of humour comes from minstrelsy, the tradition of parodying opera and operettas and poking fun, often most insensitively, at the racial divide between white and black. Minstrelsy most commonly featured white musicians in blackface projecting their own cartoonish idea of what it meant to be black – and it was by far the most popular form of music in the US from 1840 to 1920. But while minstrelsy involved white Americans parodying their idea of African-Americans, many other white musicians like those of the Original Dixieland Jass Band chose to copy African-American musical traditions wholesale.

The musical DNA in Livery Stable Blues comes from black artists and shows that jazz is a fundamentally African-American music, even if an all-white band was first to record it. The particular mix of African-style drumbeats and the Caribbean rhythm, found in this song but so common to jazz as a whole, points to the time from 1817 to 1843, when black slaves – some from Africa, some from the Caribbean, some from the interior of the American South – would gather on Sundays in New Orleans’ Congo Square to play music and cross-pollinate their traditions. New Orleans Creoles of colour, who were the mixed-race descendants of black and white ancestors, typically identified more with European culture than with Africa’s. After the Jim Crow laws of 1890 classified the city’s mixed-race Creoles as ‘black’, they were only allowed to play with other black musicians and this brought a greater musical fluency and technical skill to black music because many Creoles of colour were trained in classical music. Jazz emerged from this merger of forms.

But as to who actually invented jazz, if such an achievement could be attributed to one person, that’s a tricky matter. Some say Elvis Presley or Chuck Berry invented rock n’ roll, others would argue DJ Kool Herc or Grandmaster Flash created hip hop. Nick La Rocca, the Original Dixieland Jass Band’s cornet player and composer, claimed that he personally invented jazz – though the cornetist Buddy Bolden had a much better claim, or even the Creole artist Morton, who certainly was the first to write jazz out as sheet music and always said he’d invented it. As jazz historian Gary Giddins puts it, “LaRocca turned racist, and proceeded to make horrible statements about how whites invented jazz, and how they were there before the black guys, and so forth, scurrilous stuff — a cartoon cliché of the Southern bigot.” Louis Armstrong was more charitable in his 1936 book Swing That Music, calling the Original Dixieland Jass Band “the first great jazz orchestra” and that LaRocca “had an instrumentation different from anything before, an instrumentation that made the old songs sound new.” But LaRocca’s later statements follow a long tradition in the US of white artists dependent on African-American culture publicly degrading it in order to justify their exploitation of it. 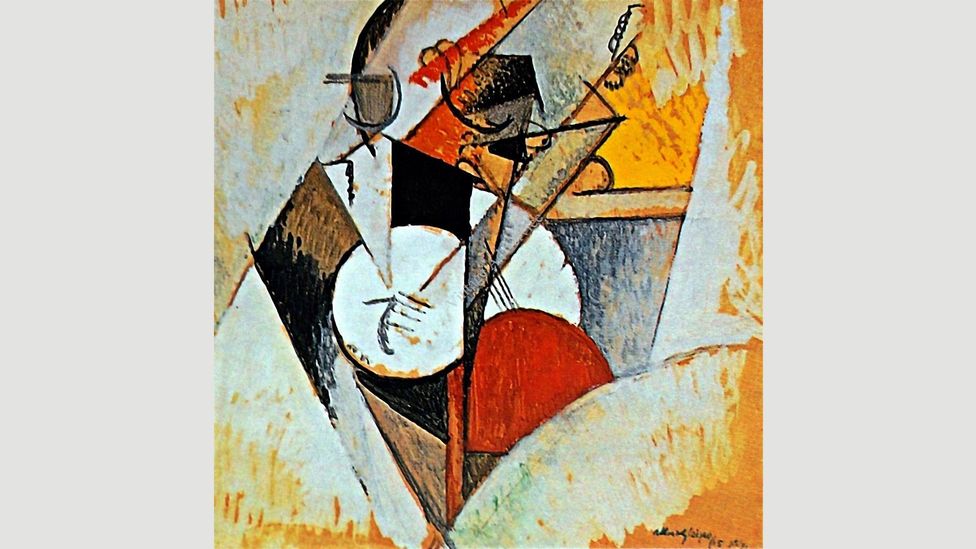 It’s not only the racism and the cultural appropriation that makes even Dixieland jazz aficionados uncomfortable with the Original Dixieland Jass Band – it’s the bad taste of it all too: LaRocca’s inflammatory comments, yes, but also the silliness of the animal sounds the musicians imitate in their performances, their lack of technical proficiency, the association of their sound with minstrelsy. But the loudest voices who declare ‘this is not jazz’ about any particular band or sound are usually jazz obsessives splitting musical hairs that only the infatuated would care about. It’s an internal civil war.

Henri Matisse produced an entire volume of his famous cutouts, accompanied by his own poetic, written thoughts, dedicated to jazz in 1947 (Credit: Christie’s)

Jazz as a whole also came under attack as an example of bad taste, however, in much the same way rock n’ roll and hip-hop would later, by people who had no knowledge of the music whatsoever. The New York Times published editorial after editorial throughout the late 1910s and 1920s touting the dangers of jazz, which had historically been associated with the brothels where it was initially played; just months after Livery Stable Blues became a hit recording, the Storyville red light district, previous tolerated by the city leaders of New Orleans, was completely shut down. And Edward Baxter Perry wrote in the popular music magazine The Etude that ragtime, into which he was lumping early jazz songs like Livery Stable Blues and the Original Dixieland Jass Band’s even more popular 1917 follow-up Tiger Rag, “is syncopation gone mad. And its victims in my opinion can only be treated like the dog with rabies, with a dose of lead. Whether it is simply a passing phase in our decadent art culture, or an infectious disease which has come to say, like leprosy, time will tell.”

These attacks on jazz from both outsiders and insiders still occur today. Even the film La La Land taps into this, with Emma Stone’s jazz neophyte Mia declaring “I hate jazz” while Ryan Gosling’s jazz pianist Seb frets endlessly about what is and isn’t jazz and whether the form has a future – “it’s conflict and it’s compromise, it’s new every time, and it’s dying.”

Over the 100-year journey from Livery Stable Blues to La La Land the music has changed drastically, while the discourse has remained the same. Perhaps it’s time to stop talking and start listening.

Style
1The wild era that changed what we wear
Music
2Jazz: Do you love it or hate it?
Around the BBC