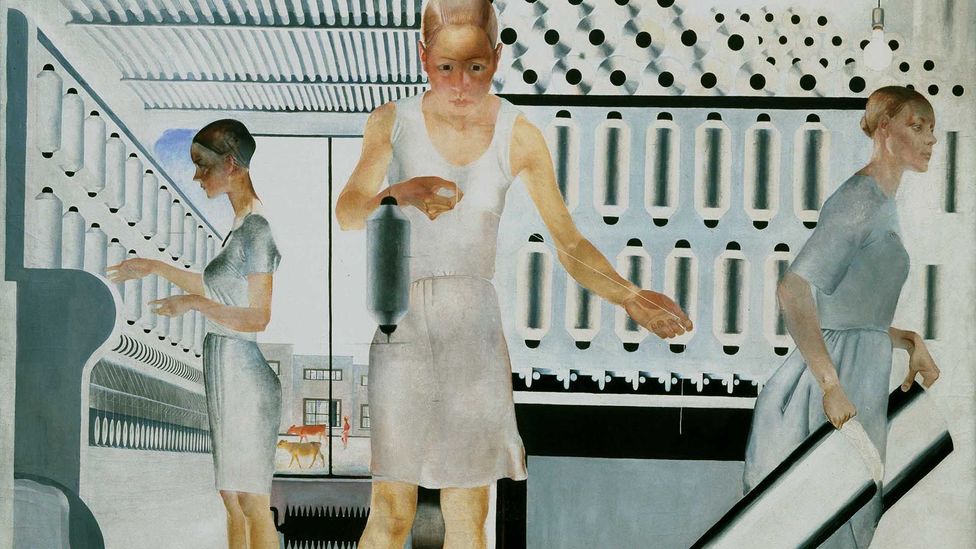 By Fisun Güner 9th March 2017
The Russian Revolution energised Soviet artists, who produced bold, new works in service of the state. But the era of experimentation was short-lived, writes Fisun Güner.
H

Had it been built, its spiral steel frame would have stood taller than the Eiffel Tower, at that time the world’s tallest manmade structure, by some 91m (299 ft). And its record as the world’s tallest building would have gone unsurpassed for over half a century, until the construction of the World Trade Center’s Twin Towers, which opened for business in 1973.

The Monument to the Third International, otherwise known as Tatlin’s Tower, was designed in 1919 by Russian artist and architect Vladimir Tatlin, following the October Revolution of 1917. It was a revolutionary design. 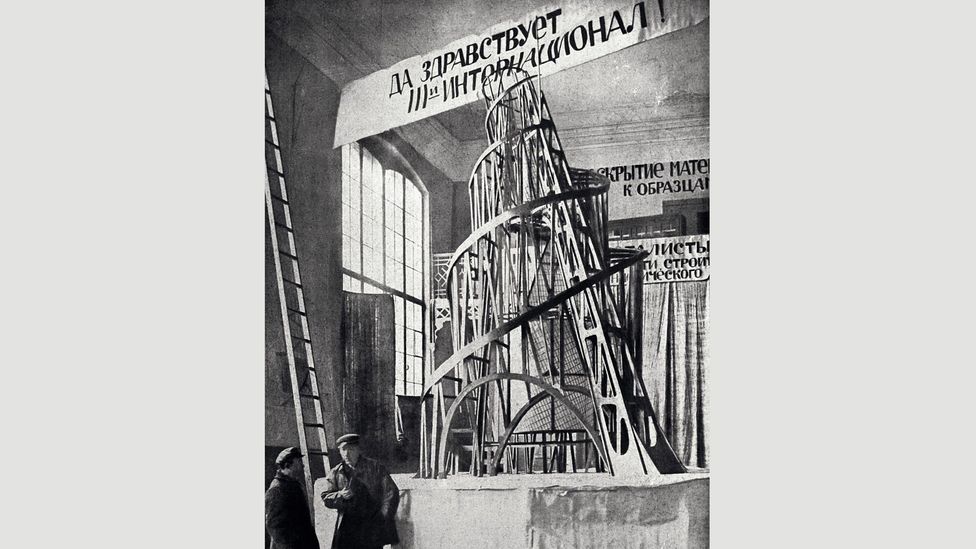 Tatlin and an assistant stand before a model of his unrealised Monument to the Third International (Credit: Alamy)

The steel frame would contain three glass units: a cube, a cylinder and a cone. These would rotate once a year, once a month and once a day respectively, and house a conference hall, a legislative chamber and an information and propaganda centre for the Third Communist International (also known as the Comintern – the organisation that advocated world communism). It would stand at just over 396 m (1,306 ft). But for reasons of cost (Russia was bankrupt and in the middle of a civil war) and practicality (was its realisation even structurally possible, and where, after all, would they get all that steel?) this staggeringly audacious symbol of modernity was never built.  We encounter it today through photographs of the original model, long destroyed, and through reconstructions.

Tatlin was a radical avant-garde artist before the Bolsheviks seized power: rather more modest in scale were his pre-Revolution wood and metal constructions, which he called ‘counter-reliefs’, and which overturned traditional notions of sculpture. But Tatlin would soon become the chief proponent of a revolutionary art whose purpose was to support the utopian ideal of the Soviet state. A new kind of art, which forcefully rejected the past, for a new world that would look only to the future. It came to be known as Constructivism, and as an avant-garde force it co-existed alongside the Suprematism of Kazimir Malevich (whose astonishing Black Square of 1915 presented an end-point in painting) and his protégé El Lissitzky. 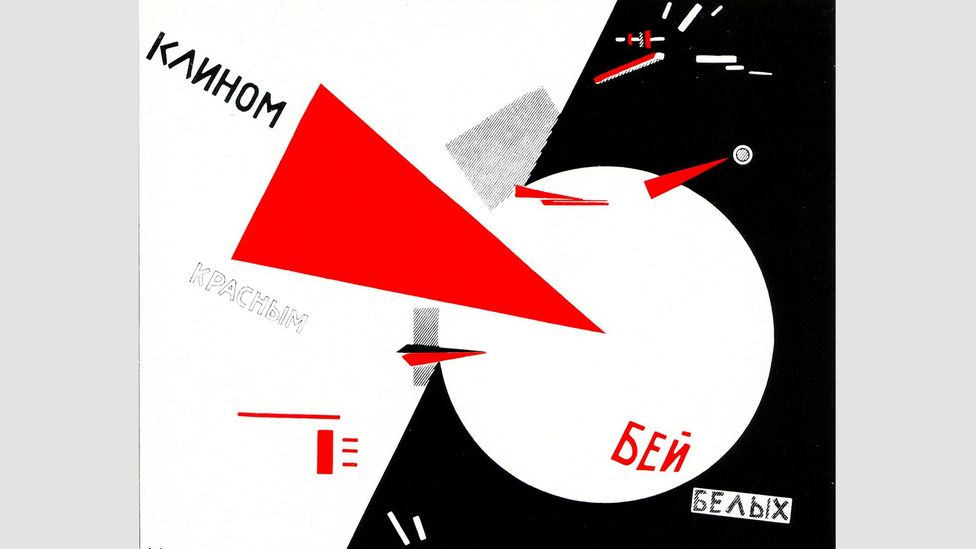 El Lissitzky’s Beat the Whites with the Red Wedge symbolises the Red Army penetrating the defences of the anti-communist and imperialist forces (Credit: Alamy)

The brilliant geometric abstraction of Suprematism transformed easel painting into the most radical expression of pure form and colour, but it was Lissitzky who put it most dynamically at the service of the state. His 1919 lithograph Beat the Whites with the Red Wedge, can hardly be more politically charged. The red wedge penetrates the white circle, which symbolises the Red Army penetrating the defences of the anti-communist and imperialist forces of the White Army. This early work cleverly plays with negative and positive space and anticipates a group of architectonic paintings, drawings and sketches that Lissitzky called ‘Prouns’ (an acronym for ‘project for the affirmation of the new’ in Russian) which lifted the flatness of Suprematism into the three-dimensional visual plane. It was, incidentally, this work that inspired the name of Red Wedge, a 1980s British group of Labour Party-supporting musician-activists, headed by Billy Bragg.

Children of the revolution

When we think of the art and design of the first decade of the Soviet Union, we usually think only of these groundbreaking figures, designers and artists who also included Lyubov Popova, a painter who soon called for the abandonment of ‘bourgeois’ easel painting, declaring that the artist’s mission was to create work for the benefit of the people and for making a new society. And we think too of perhaps the greatest photographer, graphic designer and typographer of the era, Alexander Rodchenko. Rodchenko’s 1924 advertising image for a Soviet publisher, in which the model Lilya Brik gives the siren call ‘Books!’, with one hand cupped to her mouth and with the word written in bold Cyrillic type, is probably the single best known image in Soviet art history. 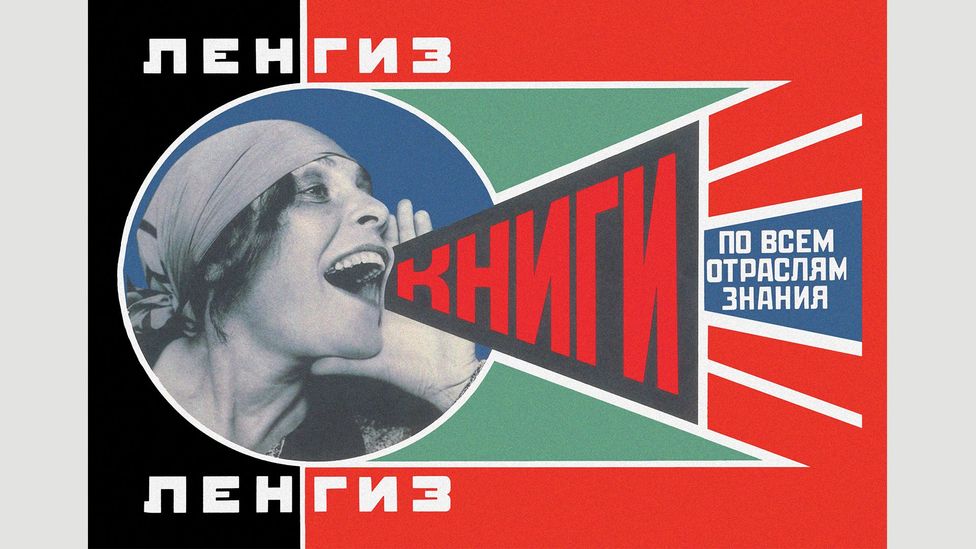 Yet many styles and movements coexisted in those first few post-Revolutionary years. But you wouldn’t necessarily know this since curators in the west have long been interested only in the radical aesthetics of the Russian avant-garde, while happily underplaying the politics that underpinned it – shying away from its narratives, in other words – in order to highlight the work’s purely formal aspects. This is, to be fair, also the fate of religious or spiritual works of art (esoteric spiritual beliefs, for instance, run through the story of modernism). We appear content to render these works all painterly surface and form and to largely ignore the things that no longer speak directly to us.

In this centenary year of the October Revolution, an exhibition at London’s Royal Academy, Revolution: Russian Art 1917-1932, seeks to act as a corrective. In this vast, sprawling and sobering exhibition we’re confronted by artists, many little-known outside Russia, who worked in a range of styles to promote the newly fledged Soviet state. Here the traditional overwhelms the new, the figurative trounces the abstract. And very early on we see a nascent Socialist Realism, an idealised figurative style in which the worker achieves heroic status as he or she helps build a socialist utopia, alongside 19th-Century-style realist portraits of Lenin and Stalin. Lenin, who died in 1924, was avowedly conservative in artistic matters, and had begun to feel sure that avant-gardism would alienate the proletariat.

So here, for example, is a large model of a bronze sculpture, which, like Tatlin’s Tower, was never realised as a finished work. It is a faintly Cubo-Futurist homage to Yakov Sverdlov, featuring the late Bolshevik official who died of the flu pandemic in 1918 (some historians now believe it was under Sverdlov’s direct orders that the exiled Romanovs were murdered). Though it pays a kind of lip-service to modernism, all the romanticised elements of Socialist Realism are already in place: Sverdlov holds aloft a torch, a cloak swirls about his heavy-set limbs, his hair is swept back and his head thrust forward, as if he is pushing against the ferocious winds of resistance with determined courage. 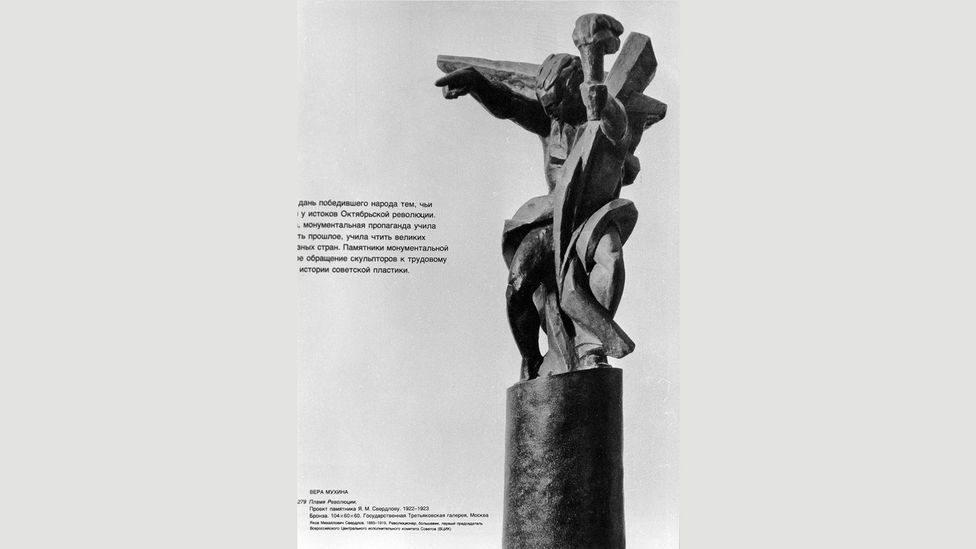 Vera Mukhina’s Flame of the Revolution was never finally realised, but the designs remain and a scaled-down version can be found in the Tretyakov Gallery in Moscow (Credit: Alamy)

Mukhina later became the premier female Socialist Realist sculptor under Stalin, winning numerous medals and awards and making the triumphal Worker and Kolkhoz Woman for the 1937 Paris World Fair, where it faced down the Nazi Pavilion’s equally monumental imperial eagle. A hammer and sickle held aloft by the pair replaces the torch. By then Mukhina’s has left behind all vestiges of the avant-garde.

By the mid-20s, the Soviet state was already looking back over its triumphs in an effort at national mythmaking

By the mid-20s, with Lenin gone, the Soviet state was already looking back over its revolutionary triumphs in an effort at national mythmaking. Among much that was crassly formulaic, Alexander Deineka was actually among the most surprisingly gifted of the Socialist Realists. Despite its very obvious propaganda value, there is something almost strange and lyrical about his best known work, The Defence of Petrograd, from 1928, which looks back to the civil war and to October 1919, when the White Army had reached the city. Frieze-like, we see exhausted soldiers trudging across an upper-level platform, while below, striding confidently in the other direction, are the sturdy workers, the heroes of the Revolution, who’ve been newly armed and are ready to die for the state.

But the spirit of radical experimentation that had ignited earlier abstract artists was coming to a halt. By the early 1930s Stalin had begun his deadly clampdown on the avant-garde, forcing Rodchenko and Malevich among many others, to renounce their ‘formalist’ ways. In this poisonous atmosphere, artists, writers and filmmakers had their work heavily censored, their output micromanaged from above. If they were to avoid the gulag there was no choice but to comply. With Socialist Realism now the only officially sanctioned art, the tremendously dynamic avant-garde spirit that had guided these groundbreaking artists was sadly short-lived.