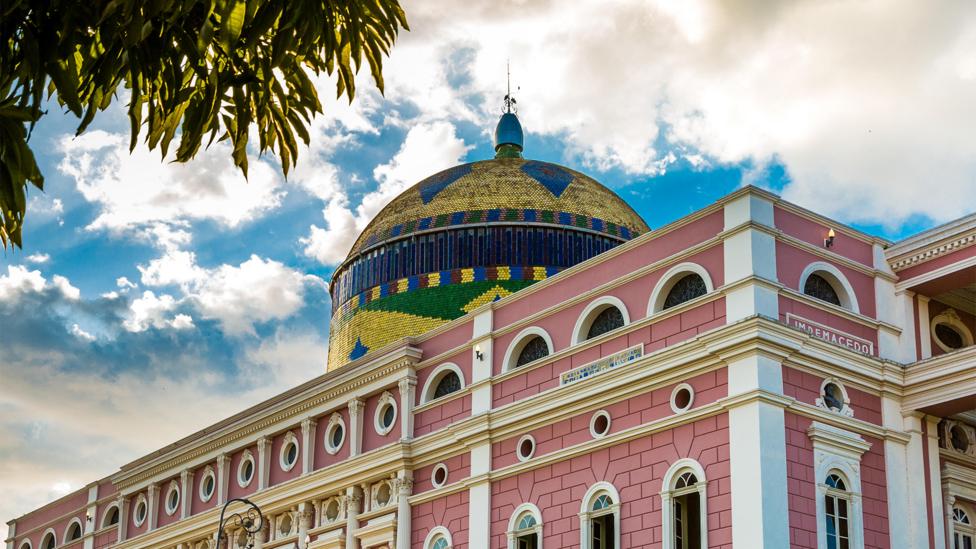 By Benjamin Ramm 16th March 2017
The city of Manaus is home to a remarkable cultural monument: a majestic 19th Century opera house that brought the grandeur of Europe to Brazil. Benjamin Ramm steps inside.
T

The tributaries of the Rio Negro are teeming with music. On the outskirts of Manaus, capital of the Amazonas province, there is a symphony of unparalleled variety – the call of the yellow-rumped cacique bird, the cadences of cicadas, the cacophony of capuchin monkeys. When the water is calm, you can hear the clicking of pink dolphins that glide in the black silted stream.

The music of Manaus is not restricted to its wildlife. The ‘Paris of the Tropics’, as it became known in the late 19th Century, is home to a remarkable cultural monument: the Teatro Amazonas (Amazon Theatre), a majestic opera house that dominates the city’s main square. Testament to the wealth of Manaus at the height of its rubber boom, the theatre is a curious attempt to replicate European cultural taste in the heart of the tropical rainforest. 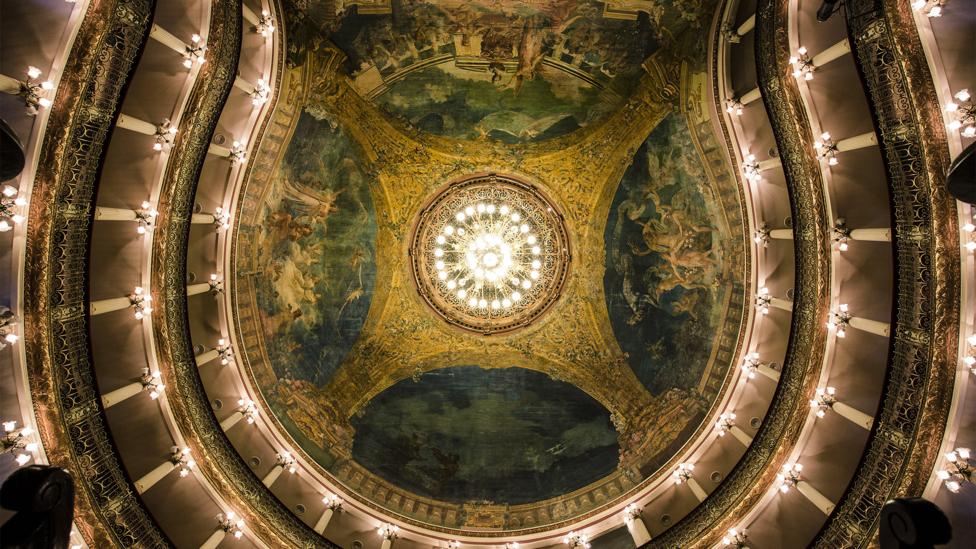 Teatro Amazonas was built by those wanting to bring European grandeur to South America during Manaus’ rubber boom (Credit: Alamy)

The opera house was inaugurated on 31 December, 1896, after 15 years of painstaking construction and negotiation. With the exception of locally-sourced wood, all the materials were imported from Europe, and no expense was spared. One hundred and ninety-eight crystal chandeliers came from Italy, including 32 made from Venetian Murano glass, while Scottish cast iron holds up the 22 vibrating hollow columns that contribute to the excellent acoustics.

The most elegant feature of the 700-seat theatre is the curvature of the auditorium, arrayed in the shape of a lyre. The Italian architect, Celestial Sacardim, modelled the interior on the Palais Garnier in Paris, and the ceiling, painted by a fellow Italian, offers the impression of looking up reverentially at the Eiffel Tower.

Not all of the artistry is European. The 75-metre-high stage is adorned with a curtain illustrated by Brazilian painter Crispim do Amaral, which depicts the local water goddess Iara amid the nearby ‘meeting of the waters’, between the black Rio Negro and the milky Rio Solimões.
The most imaginative innovation is the iconic dome, created from 36,000 tiles imported from Alsace, upon which a Brazilian flag is emblazoned. It was during the construction of the theatre, in 1889, that Brazil became a republic, ending the imperial rule of Dom Pedro II. The new republican spirit, a century after France’s own revolution, is evident in the motto at the centre of the flag, Order and Progress, which derives from the positivist philosophy of a Parisian, Auguste Comte.

The imaginative dome of the opera house is made from 36,000 tiles imported from Alsace, but it’s also controversial – many deemed it a bizarre addition (Credit: Alamy)

The dome was a controversial construction, and it continues to divide critics, according to tour guide, Samir Torres. Traditionalists deemed it a bizarre addition – neither formal nor symmetrical, nor of utility (it does not form part of the interior, and the roof had to be reinforced to support its weight). While some deride the dome as a ‘big colourful hat’, I think it makes a fitting crown for a building that fuses architectural styles (Renaissance, Baroque, neo-classical).

‘To be seen was more important than to see’

The new civic spirit of the republic did not alter the social mores of the opera’s patrons. Samir points out that the worst seats in the house, jutting out at the tip of the lyre, were also the most publicly prominent, and raised the most money at auction. To be seen was more important than to see.

Samir is amused by the image of socialites donning layers of formal evening wear in the tropical heat, and he describes the spectacle as “a fashion competition. People would melt here to show off!”. To accommodate the modish aspirations of its patrons, the theatre experimented with one of the earliest air-conditioning systems, aiming to provide relief as temperatures soared to 40C (104F) and humidity rose to 90%.

Under the energetic governorship of Eduardo Ribeiro, whose contribution is commemorated throughout the theatre, Manaus was transformed from a provincial town to a major seat of commerce and culture. By the turn of the century, Manaus was the first Brazilian city to have trams and the second with electric lighting. Dingy streets were transformed into Parisian-style boulevards, bordering Italian piazzas with fountains, while rubber barons commissioned opulent mansions in which they entertained their peers with concerts and parties.

In its first two decades, the opera house attracted artists from around Europe

Less grandiose were the living conditions of the workers who constructed the theatre, and in particular those who laboured to tap rubber, many of whom were remunerated only with food and lodging, and found themselves trapped in a vicious cycle of poverty. Nonetheless, Manaus was not immune to social change: the city became the first to elect a mixed-race governor, whose father was born a slave, and who lived in a residence near the theatre.

In its first two decades, the opera house attracted prominent artists from around Europe, but it also helped nurture Brazilian talent. In the sumptuous ballroom, replete with gold leaf and a floor comprised of 12,000 wood panels, there is a bust of Carlos Gomes, the first New World composer to be celebrated in Europe. The centrepiece of the room is a painting of Gomes’ most renowned opera, Il Guarany (“the Brazilian Romeo and Juliet”, according to Samir).

Manaus’ belle epoque ended almost as abruptly as Europe’s. In fact, as the theatre was being built, the seeds of the city’s demise were being sown. An Englishman, Henry Wickham, began to smuggle thousands of rubber pods to British colonies in Malaysia and Sri Lanka. Within 20 years, these plantations were producing rubber more cheaply and efficiently, and the Amazonian rubber market soon collapsed. The theatre was forced to close in 1924, and although Manaus experienced a brief revival when Japan occupied British plantations during World War Two, the ‘golden age’ lasted less than three decades. 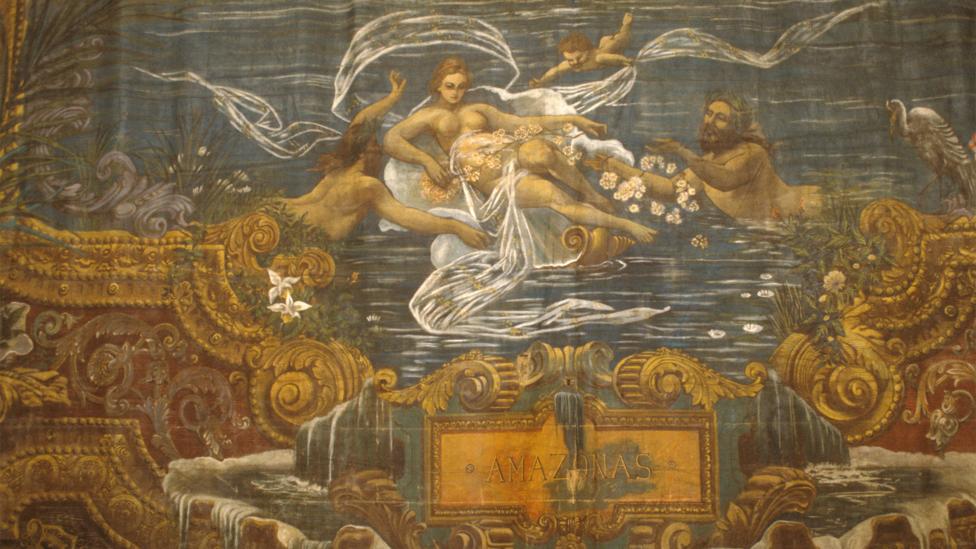 The stage curtain, illustrated by Brazilian painter Crispim do Amaral, depicts the goddess Iara amid the ‘meeting of the waters’ (Credit: Alamy)

The city continued to maintain its theatre, which became a national historic landmark in 1966, and it underwent various renovations: the exterior was changed from pink to blue in 1929, and then to grey between 1972-74, to match the military junta’s colour scheme for all public buildings. (Evidence of this drab exterior comes in the form of a 30,000-piece Lego model, a gift from Denmark in 1973). The facade reverted to its original pink after a public ballot in 1990.

For over 70 years, the Teatro Amazonas did not host a performance - except from an intriguing cameo appearance in the opening scene of Werner Herzog’s 1982 film, Fitzcarraldo. The protagonist of the movie is an opera-obsessed rubber baron who paddles for thousands of kilometres down the Amazon from Iquitos in Peru to Manaus, to watch a performance by the celebrated tenor Enrico Caruso.

There is a degree of historical accuracy to this fiction: the first performance at the theatre, on 7 January, 1897, featured Caruso in Ponchielli’s opera La Gioconda. It was said that the entire opera house was built just to lure him to Manaus, so that the rubber barons could hear the world’s most popular tenor. More recently, a Bollywood movie was filmed in the theatre, with actors from Mumbai dressed in fin de siècle European attire.

The Amazonas Philharmonic has an international reputation – 39 of its 54 members are from Russia, Belarus and Bulgaria

The theatre reopened briefly in 1990, but was forced to close after a fortnight, embroiled in a scandal about accessibility. (Manaus residents protested on the steps: “We paid for this opening, but we are left outside!”). Only in 1997 did the theatre begin to host regular concerts, with the establishment of the Amazonas Philharmonic. 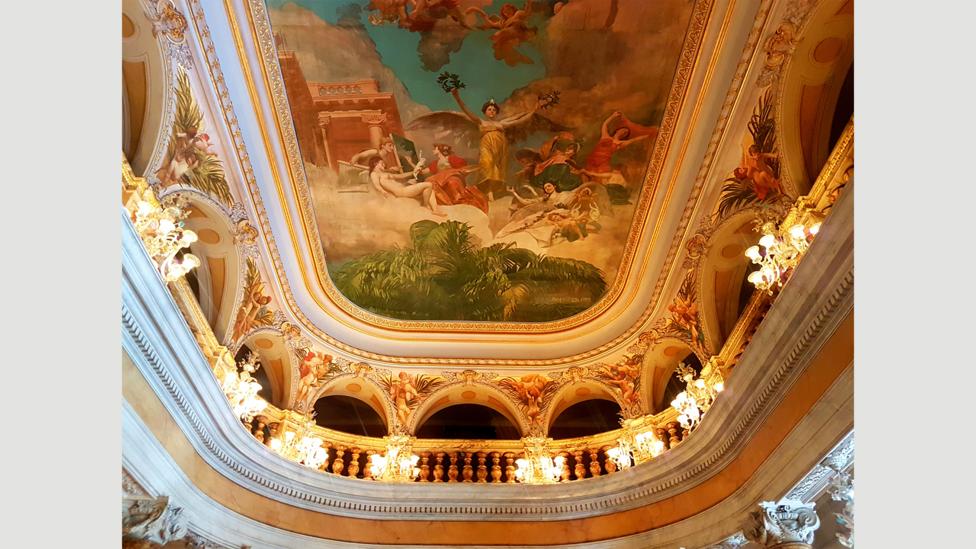 The ballroom’s ceiling features The Glorification of the Arts, a painting in which gods and goddesses bestow their gifts from above (Credit: Benjamin Ramm/Emma Bridget Byrne)

When I visited in March, the theatre was gearing up to host the 21st annual Amazonas Opera Festival, which runs from April to May. A small exhibition showcases costumes from previous productions, including finery from a performance of Bizet’s Carmen in 2014. The White Stripes gave a concert here in 2004, and the philharmonic has benefitted from an international reputation: of the 54-member orchestra, 39 are from Russia, Belarus and Bulgaria.

The theatre has a busy schedule: on consecutive nights, I watched the Amazonas Jazz Band and the Guitar Orchestra, along with a day rehearsal of the Experimental Orchestra. Each performance was open to all and free to attend, and attended by a capacity crowd that crammed into the once exclusive boxes.

On the ceiling of the ballroom, there is a painting titled The Glorification of the Arts in the Amazon, in which gods and goddesses bestow their gifts from above. For some of its early progenitors, the theatre expressed an idea of culture removed from nature. They sought to tame a wild habitat with a vision of civilisation cultivated in Paris, and nurtured by men eager for European grandeur. The spirit of the Amazonas offers an altogether more organic interpretation; so that, in musical terminology, it acts not in dissonance, but in harmony.