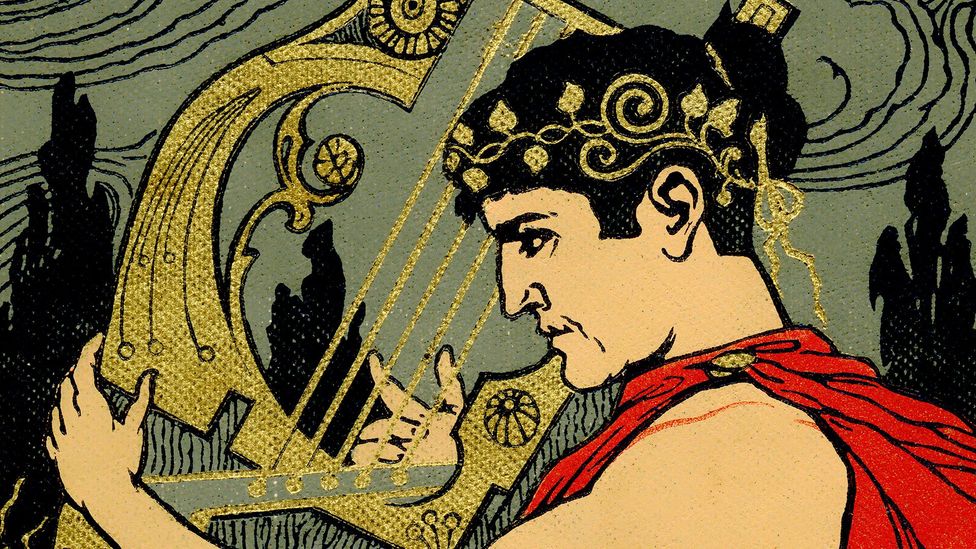 By Benjamin Ramm 24th April 2017
Everyday citizens became the judges of an ancient prize for drama that challenged popular opinion and rewarded subtlety and intelligence. It was an experiment that shaped not just the theatre, but democracy itself, writes Benjamin Ramm.

“Popular culture is a contradiction in terms,” remarked the fashion designer Vivienne Westwood. “If it’s popular, it’s not culture”. This pithy fallacy reflects a widespread belief that artistic excellence is the preserve of a social elite. But it ignores arguably the most important creative moment in Western culture – when the citizens of ancient Athens developed a form of theatre that was richly imaginative, morally complex and distinctly democratic. 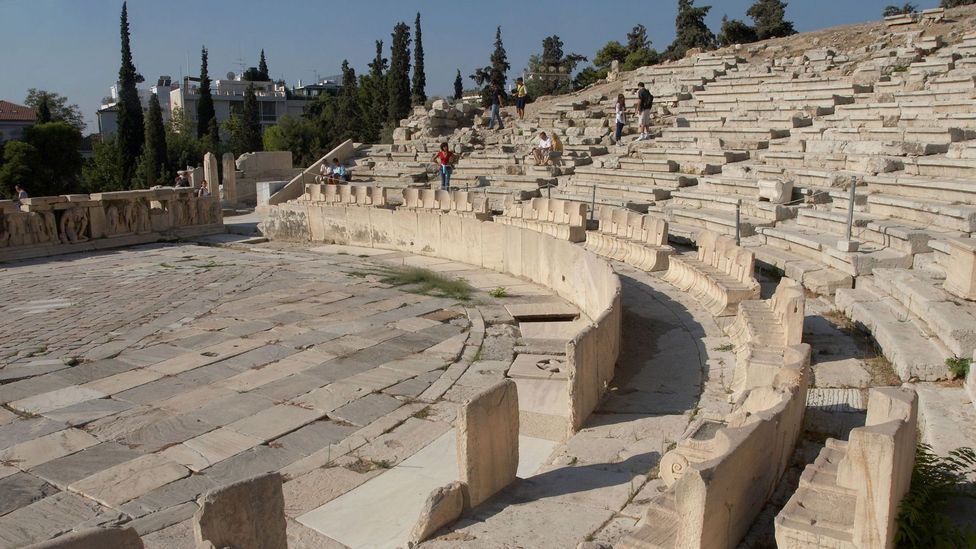 The Theatre of Dionysus, situated at the foot of the Acropolis, could accommodate up to 17,000 audience members and was considered to have perfect acoustics (Credit: Alamy)

Before the Athenians invented democracy, they invented tragedy, although the earliest plays that survive are from the first democratic period (507-404 BCE). This was a brief but brilliant era of invention, characterised by a spirit of experimentation, ambition and self-criticism. Although the democracy was limited in scope, it catalysed extraordinary intellectual creativity, with significant innovations in mathematics, medicine, philosophy, history and poetry.

Poorer citizens received a public subsidy to attend, and productions were funded by a super-tax on wealthy patrons

The Athenian experiment is notable not merely for the talents it produced: three of the greatest tragedians – Aeschylus, Sophocles, Euripides – and one of the finest comedians, Aristophanes. Its achievement lies in the social imagination of the city itself, which empowered individuals to be both critical and creative. Everyday citizens became discerning judges, whose deliberations and verdicts challenge our preconceptions about popular culture. 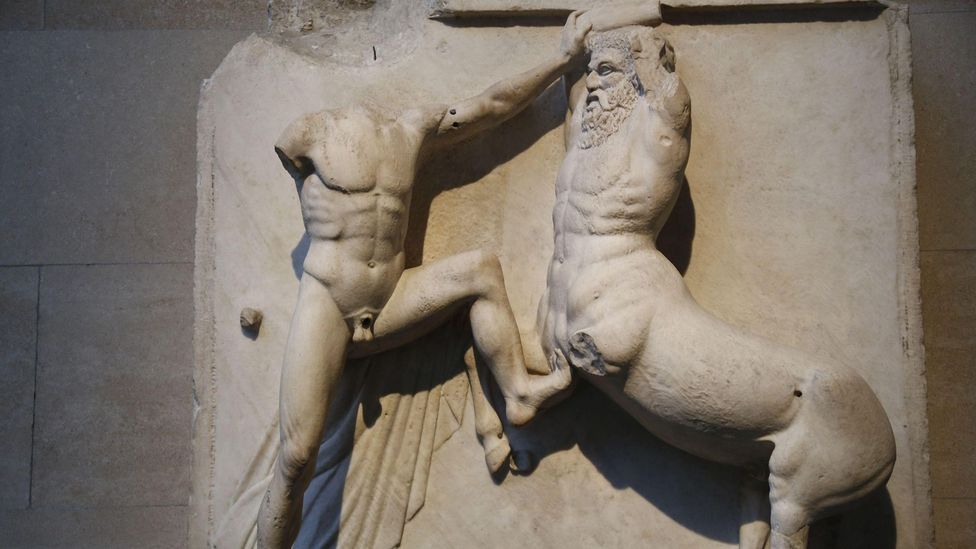 Greek art often served to reinforce ideals of human behaviour, such as how the Parthenon’s Metopes depicts the defeat of our animal nature by reason (Credit: Alamy)

Performances took place during a five-day religious festival called the Dionysia, named after the god of wine, associated with the loosening of tongues. Poorer citizens received a public subsidy to attend, and productions were funded by a super-tax on wealthy patrons. Ten citizen judges were selected randomly by lot, from a committee drawn from every corner of the city. Of their ten votes, five were chosen at random, and tallied accordingly. Yet the judges were careful to consider the opinions of the thousands of citizens in attendance – not least because judges could be impeached the following day.

By the standards of modern consumer democracy, we might expect the plays to be crudely populist appeals to the lowest common denominator – simplistic, chauvinistic and jingoistic. But the citizens consistently rewarded productions that challenged them ideologically and excelled artistically. Prize-winning plays articulated the pleas of the un-represented – women, exiles, foreigners – and provided a rare space for the expression of unfiltered emotion. 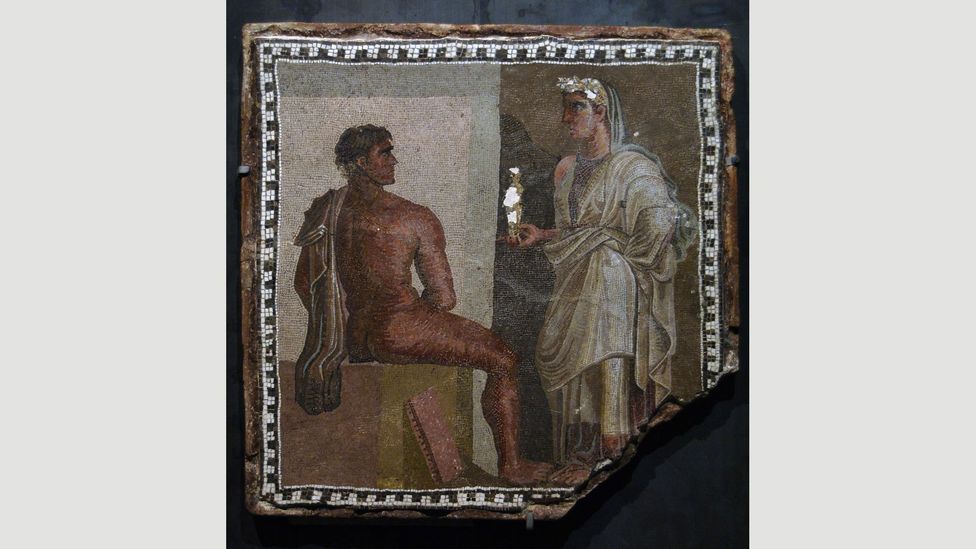 Greek drama also inspired the visual arts in ancient Greece and Rome, such as this mosaic of Orestes from Aeschylus’ trilogy The Oresteia (Credit: Alamy)

The earliest surviving tragedy, The Persians (472 BCE) by Aeschylus, illustrates this sensitivity. Performed just eight years after the Persians had torched Athens, the play elicits sympathy for the city’s enemy (“Persian wives in softness weep / each her bold warrior husband / dispatched with gentle love and grief”). Athenians citizens, many of whom had suffered at the hands of the Persians, awarded the play first prize.

For Professor Edith Hall of King’s College, London, The Persians is also “an exercise in self-definition; a highly subtle, clever piece of propaganda”. Although the play is set in the court of the king Xerxes, it is more concerned with Athenian than Persian politics. Xerxes waged a disastrous campaign against Athens that resulted in the death of many of his men, but “Persia cannot hold him / to account”. By contrast, Athenians live in a democracy of citizens: “They are slaves to none, nor are they subject”. The ghost of Xerxes’ father, Darius, admonishes his son’s “insolent acts and godless arrogance”. Xerxes’ excessive ambition led him to pursue an unnecessary war; the play is a warning to those who “end up squandering great prosperity”. 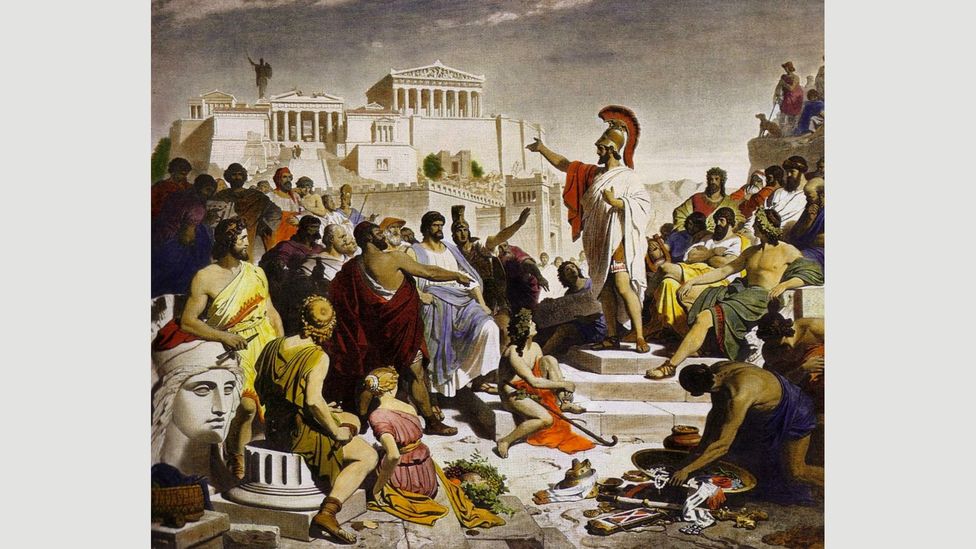 Pericles was Athens’ longest-serving democratic leader and he emphasised the connection between the arts and politics and the importance of civic engagement (Credit: Wikipedia)

An anti-war message is also evident in the first surviving comedy, The Acharnians (425 BCE) by Aristophanes. Set during the conflict with Sparta, the play critiques the most bellicose elements of Athenian society. The protagonist, Dikaiopolis (‘the just citizen’), is a beleaguered farmer, weary after six years of war. He magically flies over to Sparta to make his own private peace – an unlikely scenario, especially in a society that described purely private citizens as idiotes.

Voting was a much more public, communal and collective political act than The X-Factor – Cartledge

The Acharnians won first prize, despite its “very tricky subject matter”, according to Professor Paul Cartledge of the University of Cambridge. He regards Athenian theatre as “democracy in action” and describes the comedic genre as a combination of the bawdy and the satirical. Contemporary comparisons are revealing, particularly in relation to shows that involve voting. Cartledge says that, unlike The X Factor or Strictly Come Dancing, the performances were “a much more public, communal and collective political act. It was quite unlike the private experience of sitting in your own home, watching a distant event on television, where you’re not face to face in conversation with your fellow judges and audience members.”

It is tempting to suggest that the playwrights achieved popularity without resorting to populism. Theatre was regarded as education for citizenship, and Athenians were wary about appeals to base political instincts – the city even instituted a practise called ostracism, in which potentially demagogic figures were voted into exile for a decade. Despite the presence of a chorus, the plays have no guiding narrator, and in true democratic style, present a variety of voices and arguments.

The perils of popularity

Yet even at the zenith of democracy, there were prominent figures who sought to undermine it. Plato lamented that Athenians lived under a “theatrocracy” – rule by citizens who go to the theatre. Rather than celebrating their participation, Plato derided them as ignorant and fickle, and regretted that democracy emboldens them to exercise influence. Theatre was an arena in which spectators became participants, and learnt to become citizens.

The golden age did not last – after Athens’ defeat by Sparta in 404 BCE, a group of oligarchs staged a coup, dismissing democracy as a luxury. Subsequently, theatre became a paid entertainment instead of a civic ritual, and lost its potency.

There are striking similarities between the coup of the oligarchs and that of the military junta that occupied Athens 50 years ago, in 1967. Despite proclaiming itself as nationalist, one of the junta’s first acts was to ban classical tragedies and comedies – testament to their subversive character, even 2,500 years later. (The junta also banned Tolstoy, the Beatles and writing that suggested Socrates was homosexual). 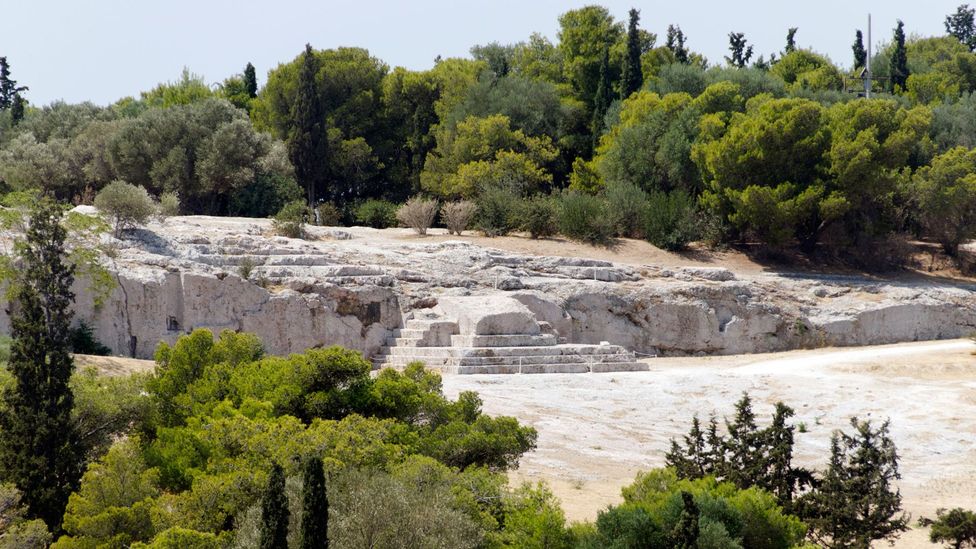 Pnyx hill, less than a kilometre from the Acropolis, was where the Athenian assembly met – its speaker’s dais is still there today (Credit: Alamy)

Intriguingly, the junta did permit one play to be performed: Sophocles’ Antigone (441BCE). It is a mark of the sophistication of the tragedy that both the junta and its democratic opponents regarded its message as an endorsement. For the junta, Antigone had flouted law and order for family honour, and it was the duty of Creon to punish her. For the democrats, Creon’s self-destruction was the result of not being able to listen, and to accommodate – that most democratic of virtues.

The 20th Century was characterised by the democratic re-appropriation of Greek tragedy. In 1901, Liberal leader Henry Campbell-Bannermann denounced Britain’s concentration camps in South Africa during the Boer War, protesting the “methods of barbarism” against women and children – a direct quote from Euripides’ The Trojan Women (415 BCE). In 1905, the Royal Court in London staged Gilbert Murray’s translation of the play, with a strongly pro-Boer stance, and two years later the Savoy Theatre staged Murray’s translation of Euripides’ Medea (431 BCE), shortly after the first mass arrests of suffragettes.

Athenian drama continues to be a fertile source of inspiration. Professor Hall describes Tony Harrison’s 1998 film Prometheus as “the most important artistic reaction to the fall of the British working class”. Adapted from a play often attributed to Aeschylus, the film is an imaginative interpretation of ancient myth against a backdrop of industrial decay. For Hall, “it provides overwhelming proof that capitalism and classicism need not go hand in hand”.

Tragedy can be transposed onto television, too. The critically-acclaimed HBO series The Wire was borrowed “wholesale” from the Athenians, according to its creator David Simon, who described the series to The Believer as “Greek tragedy for the new millennium”. The philosopher John Gray argues that The Wire distils the fundamental anti-democratic message of Greek tragedy – that chaos, rather than volition, is the dominant human condition.

The theatre of democracy has a powerful global legacy, evident in the recent retelling of The Trojan Women by Syrian refugees. The women, exiled in Jordan, interweave their experiences into Euripides’ ancient text. But which testimonies are theirs, and which are those of the women of Troy? Across cultures and time, from Athens to Amman, the performers are unified by their need to articulate the horrors of war. In the words of The Phoenician Women (408 BCE), from nearby Lebanon: “It is slavery not to speak one’s thoughts.”