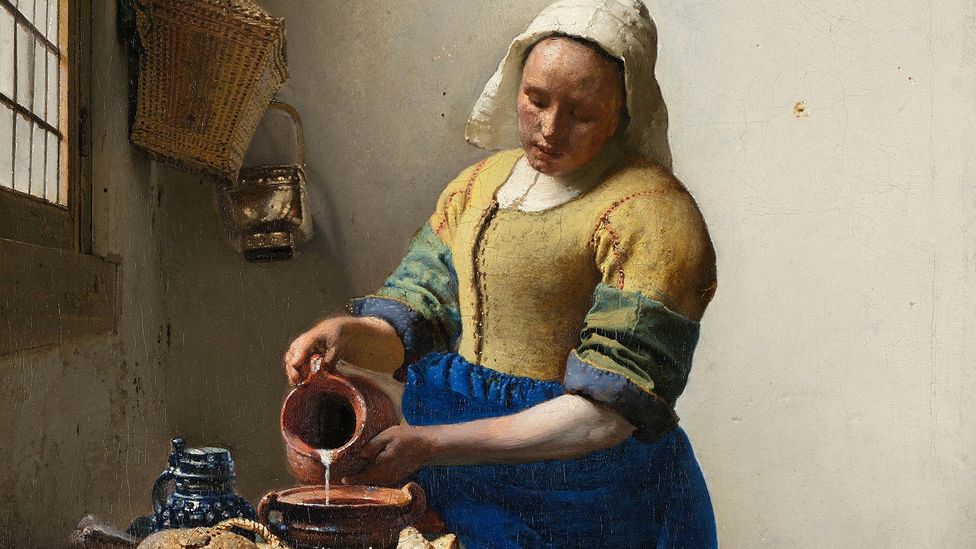 By Alastair Sooke 25th April 2017
We think of Johannes Vermeer as a meticulous detailer of the everyday. But his paintings and those of his contemporaries have more to do with each other than life in the Dutch Republic, writes Alastair Sooke.
S

Sitting in front of The Milkmaid (c1658-59), Johannes Vermeer’s exquisite, enigmatic masterpiece, which is currently on display in a stunning exhibition at the Louvre, Blaise Ducos, the show’s curator, leans back and smiles. “Actually,” he says, “Vermeer isn’t an original artist. Most of his ideas, his compositions, even his tricks, come from other painters.” He shrugs. “Still, he dwarfs them all.”

To many people, for whom Vermeer is a byword for artistic perfection, a statement about his lack of originality will sound startling. But, then, the Louvre’s revelatory blockbuster, Vermeer and the Masters of Genre Painting, which will travel later this year to both the National Gallery of Ireland and Washington’s National Gallery of Art, is attempting to overturn some of the oldest and most steadfast ideas about the 17th Century Dutch master. “Overturning those ideas?” Ducos asks, rhetorically. “Killing them, you could say.” 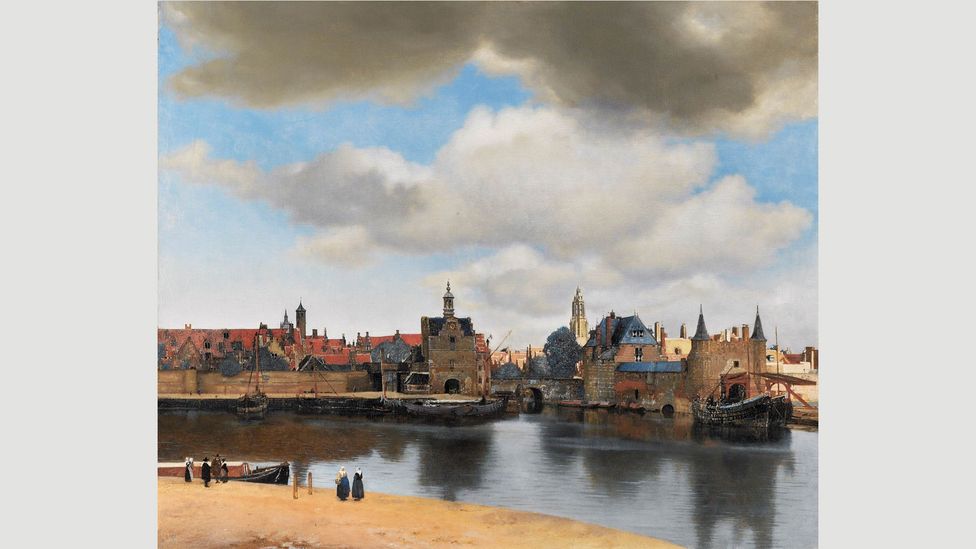 Delft is the city where father of the nation William the Silent was assassinated and where the monarchs of the House of Orange-Nassau are interred to this day (Credit: Wikipedia)

Chief among them is the notion that Vermeer was a genius who worked in splendid isolation. This stems from the famous description of Vermeer by Théophile Thoré-Bürger, the 19th Century French art historian who rediscovered him, as the “Sphinx of Delft”. (Thoré was referring to the Dutch city where Vermeer was baptised in 1632 and buried in 1675.) “It is a very alluring phrase,” Ducos says, “because it suggests the mystery, the enigma, the sheer beauty of it all – but also the provincialism: Delft, in Thoré’s phrase, is imagined as a remote town.

Yet, Ducos reminds me, in Vermeer’s day, Delft was anything but a backwater. “In the 17th Century, it was abuzz,” he explains. “You had Amsterdam, the great metropolis, The Hague, Rotterdam – and Delft, which had an aristocratic atmosphere.” In such a cosmopolitan climate, Ducos continues, it is inconceivable that Vermeer was unaware of developments in Dutch art happening elsewhere.

This is the premise of the show at the Louvre, which is also celebrating Dutch Golden Age art upstairs, in the Sully Wing (where another exhibition showcases 17th Century Dutch masterpieces, including 11 works by Rembrandt, from the Leiden Collection in New York): that Vermeer, like his contemporaries, was enmeshed in the art world of his own time, and had regular access to pictures by his peers, many of which inspired his own work. 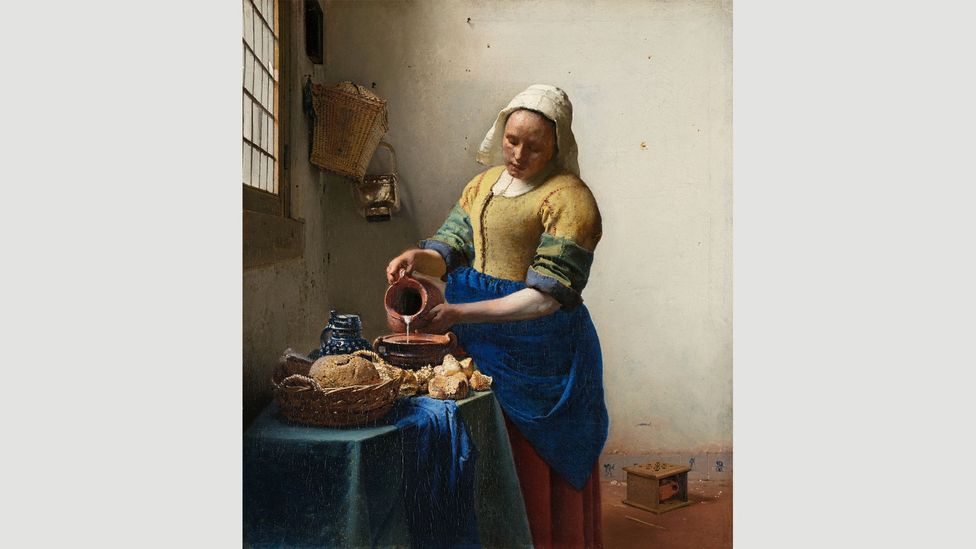 After the Girl with the Pearl Earring, The Milkmaid is perhaps Vermeer’s most famous painting – it hangs in the Rijksmuseum in Amsterdam (Credit: Rijksmuseum)

Another common misconception about Vermeer – that he meticulously chronicled daily life – is the result of a wider misunderstanding about the nature of Dutch genre scenes. Traditionally, genre painting is understood as the art of the everyday – and it’s something, the textbooks tells us, at which Dutch Golden Age painters excelled.

The verisimilitude of these paintings is high, but the realism is low – Blaise Ducos

At the Louvre, for instance, we find almost 80 elegant Dutch genre scenes, mostly depicting fashionable young gentlemen and society women engaged in various pastimes and leisurely pursuits, from playing musical instruments and writing letters, to adjusting strings of pearls and receiving well-heeled visitors. Artists of the Dutch Golden Age were known for their consummate technical skill, which they wielded to capture flawlessly the appearance of the world. As a result, many of the paintings at the Louvre – by the likes of Gerard ter Borch, Gerrit Dou, and Frans van Mieris – seem almost photographically realistic. They are like snapshots, apparently recording the customs of well-to-do people in the Dutch Republic.

Not so, says Ducos. “The verisimilitude of these paintings is high, but the realism is low,” he says. “They are not like photographs. Rather, they are scenes that are arranged and rearranged, and that’s not realistic. For example, they are not portraits but paintings of ideal types: women of beauty, scholars. Some objects, such as chandeliers, were never found in [domestic] interiors at that time.” He pauses. “These paintings were done for the rich, and they were trying to show off.”

The exhibition at the Louvre makes plain this paradoxical point about the unrealistic nature of Dutch realism. Looking at a Dutch genre painting on its own, it’s tempting to assume that the artist was carefully transcribing whatever was before him. Seeing so many genre paintings together, we realise that Dutch artists weren’t interested only in reality: they were also keeping one eye firmly on other artworks by friends and rivals. 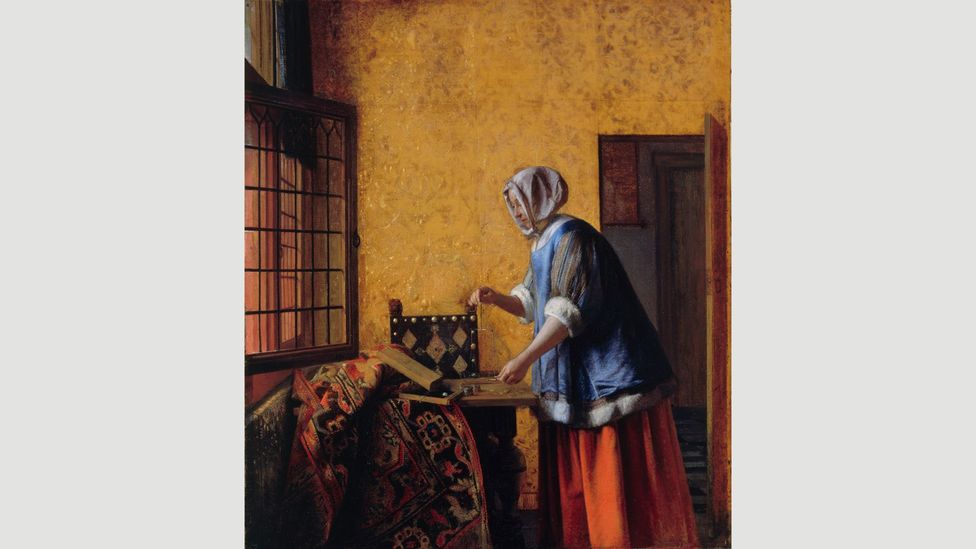 The rich clothes of the subject in Pieter de Hooch’s Woman Weighing Gold Coin suggest she is the wealthy wife of a money lender (Credit: BPK, Berlin)

Consider the juxtaposition that kick-starts the show: Pieter de Hooch’s Woman Weighing Gold Coin and Vermeer’s Woman with a Balance (both c1664). Yes, each painting differs in style and atmosphere, but, compositionally, they are remarkably similar – so much so, in fact, that one surely inspired the other. In this case, the catalogue suggests, Vermeer most probably followed and improved upon De Hooch.

Elsewhere, we find groups of paintings that are demonstrably in dialogue with one another: pictures of women at their toilet, of women interacting with parrots, of women writing love letters, of women playing guitars. Dutch genre scenes often present attractive young women, resplendent in shimmering satin, for the delectation of the viewer. 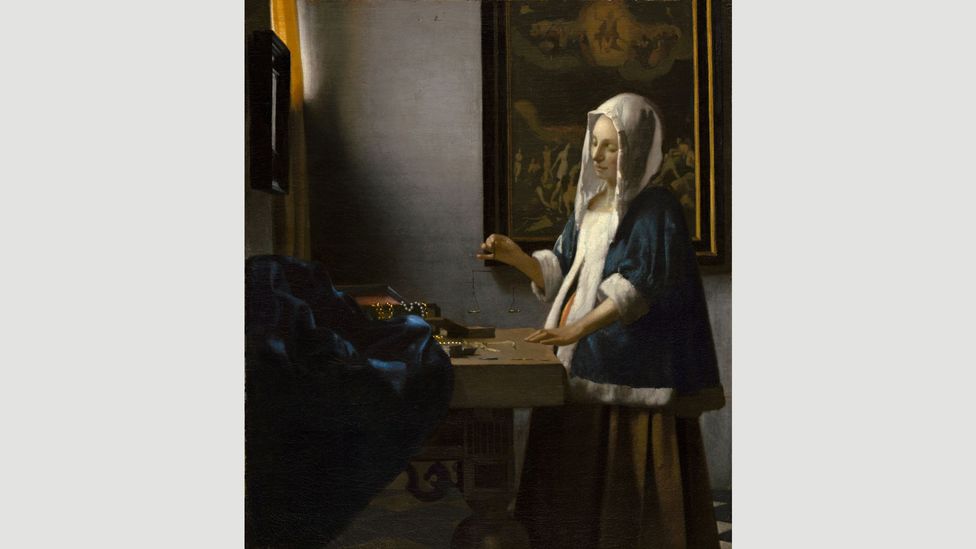 In one trio of seductive paintings, three young women sit by themselves at keyboards, looking out coyly at the viewer. The earliest in the series is Dou’s Woman at the Clavichord (c1665), from London’s Dulwich Picture Gallery. In the catalogue, art historian Marjorie E Wieseman suggests that Vermeer “probably” saw it in 1665, in an exhibition of 27 paintings by Dou that belonged to a collector in Leiden. Either way, Vermeer obviously borrowed and adapted Dou’s composition at least twice: once, in the National Gallery’s Young Woman Seated at a Virginal (c1671-74), and again, this time streamlined and intensified, in the Leiden Collection’s Woman Seated at a Virginal (also c1671-74) – the only one of Vermeer’s 36 extant paintings still in private hands.

There are even examples in the Louvre’s exhibition, says Ducos, of an artist taking a specific motif from another artist’s painting in what we would call “a cut-and-paste job”. Sadly, there are no sketches or preparatory drawings to “prove” this: “We do not have that,” Ducos says, “and not because they have not survived; we would have some traces of that.” Rather, Ducos suggests, Dutch artists in the third quarter of the 17th Century were constantly on the move, and would have encountered paintings on their travels.

“Take Vermeer,” says Ducos. “We have no account of him travelling – but the transportation system was the best in Europe at the time. He must have seen paintings in artists’ workshops or, more likely, in collectors’ mansions in Delft, near Delft, in The Hague, which was so close, or even in Amsterdam.”

Why is Vermeer a household name but Ter Borcht isn’t?

"Collectors’ mansions were the place for people to meet – the hub of their time – and Dutchmen are very social,” he adds. “Our exhibition shows that these artists had strong relationships and were vying against each other, spurred by many possible emotions: admiration, jealousy, the wish of one to outdo the other. Everyone in this group of genre painters was looking at each other.” 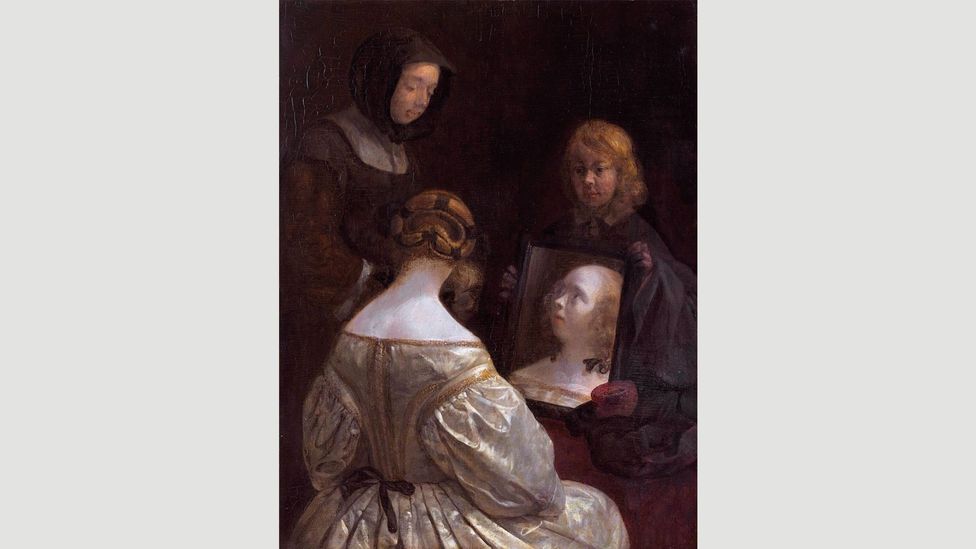 It’s a compelling case, backed up by the evidence of the paintings. But isn’t there a risk that by situating Vermeer firmly in the context of his contemporaries, his genius will be diminished? After all, time and again, the Louvre’s exhibition demonstrates that the great innovator within Dutch genre painting was Ter Borch, who, in his day, was far more famous than Vermeer. So how come Vermeer, not Ter Borch, is now a household name?

Ducos thinks for a moment. “Vermeer has such a distinct tone,” he replies, “and a psychology that is absent from the other paintings. Most Dutch genre paintings are functional: they describe. The art of describing – that’s very Dutch. Vermeer is Dutch, of course. But, at the same time, he’s universal. In a way, he’s like a Chinese man wandering in Europe: he could be from anywhere, which isn’t the case with Ter Borch, who has a much more local flavour.”

Ducos gestures towards The Milkmaid, which Vermeer painted when he was only about 25 years old. “The Louvre has the source for this painting,” he says, referring to Dou’s Kitchen Maid of c1645-53, a tour de force of detailed realism, which also depicts a female servant pouring liquid into a bowl – in this case positioned beside a bunch of suggestive carrots.

“Obviously, the two compositions are much alike,” Ducos continues. “But I think Vermeer was unnerved by what Dou had done, because he thought it was anecdotal, even a bit ludicrous. So, he reacted against Dou’s painting and simplified it, peeled away all the accessories, all the unnecessary impedimenta. In the Dou, the face of the lady and the carrots are given the same importance. But in The Milkmaid, there is hierarchy, and everything is meaningful.”

How, then, would Ducos describe the nature of Vermeer’s genius? “Vermeer’s art is an art of transformation,” he replies. “In The Milkmaid, he transformed Dou, by getting back to the essential, and turning a humble servant into a queen. Once you’ve deciphered Dou’s Kitchen Maid, it’s done. With Vermeer, there is more psychological complexity, more to dwell on. You can spend your life looking at The Milkmaid.”

Alastair Sooke is art critic and columnist of the Daily Telegraph.