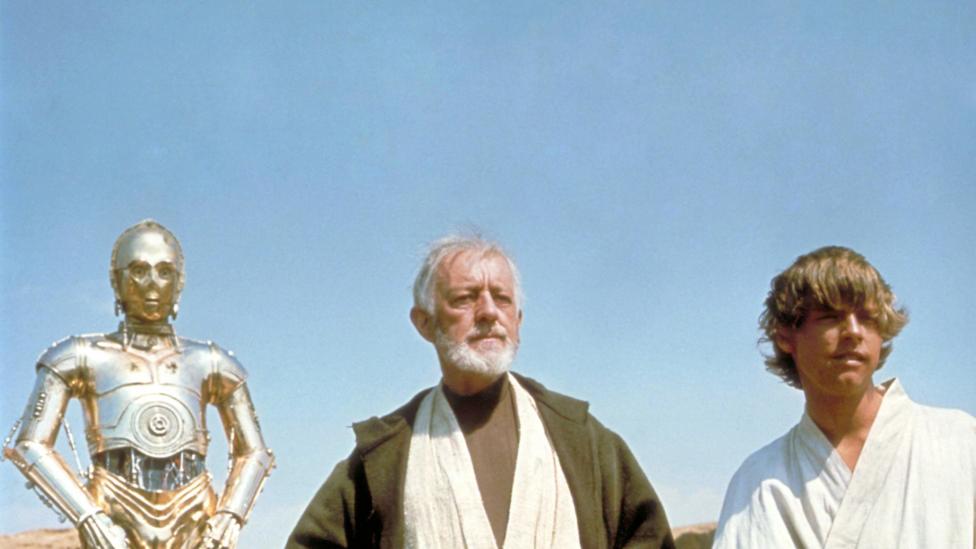 By Nicholas Barber 22nd May 2017
All subsequent films undermined the stunning original, which teased viewers’ imaginations by not answering everything, writes Nicholas Barber.
F

Forty years on from the release of the film we’re now supposed to call Star Wars – Episode IV: A New Hope, the ruby anniversary celebrations have tended to emphasise its phenomenal legacy: the three sequels and four prequels, the two TV movies and one animated movie, the 298 novels and 278 cartoon episodes, and, of course, the Star Wars Holiday Special, along with the video games and action figures, the T-shirts and lunch boxes, and all the other countless proton torpedoes which George Lucas’s space opera has fired into the reactor core of popular culture.

There’s a sense that this is just one of many adventures in that galaxy far, far away

It’s understandable. There aren’t many people who have left as deep an imprint on modern mass-media entertainment as Lucas has – Stan Lee, maybe? – so it’s only fair that his enormous influence is acknowledged.

But there is a downside to this emphasis. It implies that the principal achievement of A New Hope was to enable all the films and spin-offs which followed, as if it were a cathedral’s foundation stone. And that could be precisely the wrong way to see it. As enjoyable as the sequels and prequels are – some of them, at any rate – they can obscure our view of the original. To some extent, they spoil it. The Star Wars franchise may be the most successful in cinema history, but it might have been better if it had begun and ended with a single film in 1977. 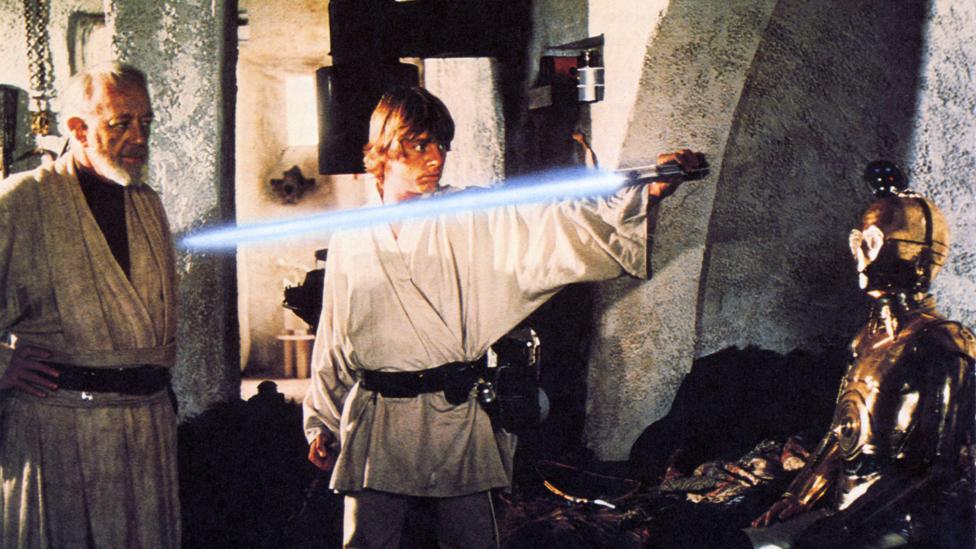 The original Star Wars film hinted at many events in the history of its universe, such as the Clone Wars, which remained a source of mystery to fans for decades (Credit: Alamy)

Paradoxically, one of the cleverest aspects of A New Hope is that it always seemed to be part of a series. When it was released, it wasn’t labelled Episode IV – that tag was added for the 1981 reissue – but it did give the impression that its story was already well underway. Nodding to the Saturday morning science-fiction serials that inspired him, Lucas included a so-called “opening crawl” of introductory text which explained what went on in the previous notional episodes: “Rebel spaceships, striking from a hidden base, have won their first victory against the evil Galactic Empire.” And from then on the film maintains the mischievous illusion that, if we’d come to the cinema a week earlier, we might have seen those Rebel spaceships striking from that hidden base. We hear that Obi-Wan Kenobi served Princess Leia’s father in something called the Clone Wars, that Darth Vader was Obi-Wan’s pupil, and that Han Solo has fallen out with a gangster named Jabba the Hutt. There are references to an “ancient religion” and an “Imperial Senate”. And, of course, there is the declaration that all of this happened “a long time ago in a galaxy far, far away”. These allusions heighten the wondrous sense that the adventure we’re watching, as amazing as it is, is just one of the many which have taken place in this particular far, far away galaxy. 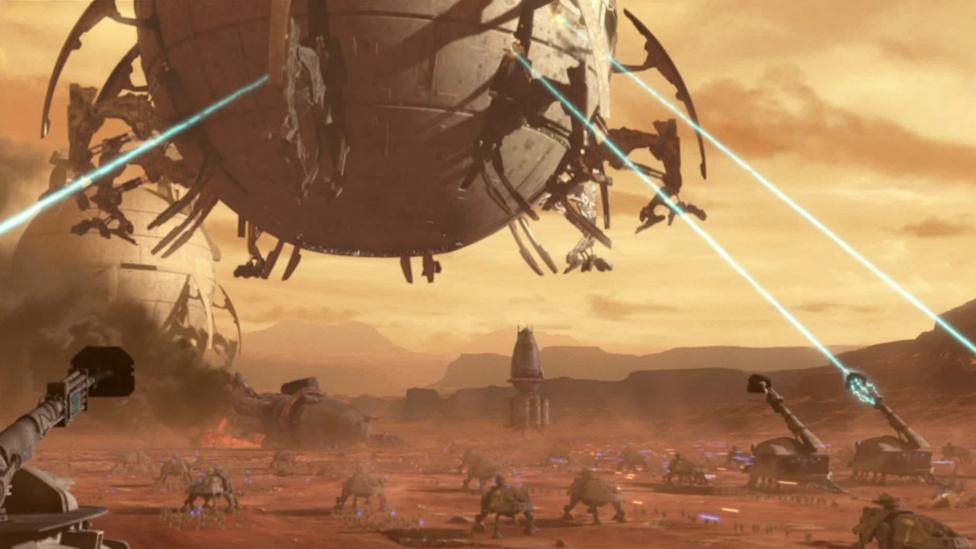 The actual circumstances of the Clone Wars were not revealed until 2002’s Attack of the Clones – and the conflict was very different than fans had imagined (Credit: Lucasfilm)

They also add up to a sophisticated postmodern joke, much like the spoof trailers incorporated into Quentin Tarantino and Robert Rodriguez’s Grindhouse double bill, or the tantalising cases which are mentioned but not described in Arthur Conan Doyle’s Sherlock Holmes books (“The politician, the lighthouse, and the trained cormorant”; “Ricoletti of the club foot and his abominable wife”). We know that the texts being cited aren’t real, but it’s intoxicating to imagine that they were. 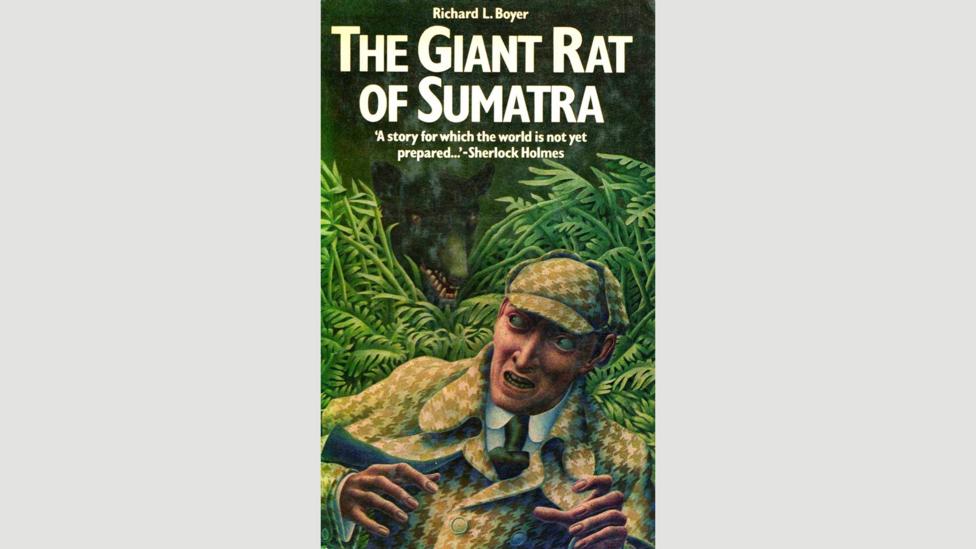 Doyle often teased Sherlock Holmes mysteries without further elaboration, such as the story of The Giant Rat of Sumatra, which others later fleshed out (Credit: Titan)

For that reason, A New Hope would be a lot more intriguing today if every other episode had been left to our imaginations – to playground games, to pub discussions, to self-published fan fiction. Instead, the episodes which did come along answered its questions, solved its mysteries, filled in its blanks and narrowed its mythical scope to the prosaic tussles within one dysfunctional family. The prequels demystified the iconic villain of A New Hope by showing him as a grumpy brat, while the most recent sequel, The Force Awakens, devalued its victory by showing us how ultimately pointless it was: not only did evil prevail, but two of the heroes (Han Solo and Princess Leia) had a son who grew up to be a genocidal, patricidal maniac. And don’t get me started on Jar Jar Binks and the Ewoks. The magic of A New Hope tricked us into believing that we were watching one chapter in an ongoing epic. A few years later, when it really was one chapter in an ongoing epic, the magic faded.

I can say from experience that this argument doesn’t go down well with some Star Wars fans, their main objection being that A New Hope isn’t the best film in the canon. The Empire Strikes Back, they point out, has come to be accepted as the franchise’s peak, with a 94% rating on Rotten Tomatoes (higher than A New Hope) and an 8.8 on IMDB (just ahead of A New Hope’s 8.7). As technically superior as it may be, though, the fact remains that Empire does what we expect a Star Wars film to do, whereas A New Hope did what nobody expected. It’s true that Lucas was paying tribute to Flash Gordon and Buck Rogers, but he also put in a wizard from Arthurian legend, two bickering servants from a Samurai film (Akira Kurosawa’s The Hidden Fortress), a cantina from a western, and aerial dogfights from World War Two and Korean War movies (when Lucas screened an early cut to his friends, he spliced in fighter-plane footage from The Bridges at Toko-Ri). No one had done that before. 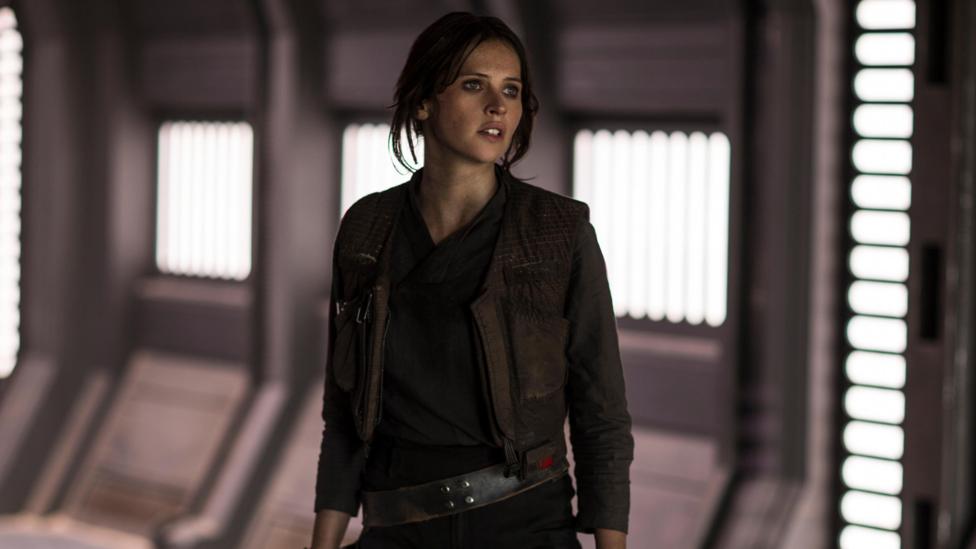 The two most recent Star Wars films, The Force Awakens and Rogue One, draw inspiration from A New Hope, with Rogue One tying into the start of that film (Credit: Lucasfilm)

Besides, Empire is obviously an intermediate episode with no resolution of its own. The genius of A New Hope is that it pretends to be one instalment in a sprawling saga, and yet it is the only Star Wars film to have a complete and satisfying plot. It is the only one in which the hero’s journey leads from nowhere to galactic glory. Any sequel was always going to be as redundant as a sequel to Cinderella or Casablanca.

Never mind about that, say the Empire-icists. What about all the classic characters who were in the 1980 follow-up? What about Lando Calrissian and Yoda and Boba Fett? To which I’d have to reply, what about them? If I want to see a Millennium Falcon-piloting smuggler who finds his conscience in time to join the Rebels, I don’t need Lando. I’ve got Han Solo. If I want to see a white-haired hermit who turns out to be a Jedi master, Obi-Wan Kenobi was doing that job perfectly well before Yoda hobbled into view. As for Boba Fett – a caped, helmeted, armoured villain – any resemblance to Darth Vader is entirely un-coincidental. Vader had been conceived as a bounty hunter, but when he was rewritten as an Imperial kingpin, that role was handed to Boba Fett.

It’s remarkable how quickly Lucas began plagiarising himself – or, to be more generous, how quickly he began playing variations on the themes he introduced in A New Hope. The very first sequel was already ringing with these variations, and they have been echoing through the franchise ever since. Of the eight live-action Star Wars films, three have climaxed with a rebel squadron blowing up a Death Star, and four have had an unlikely youngster being brought from a backwater planet to the heart of the conflict. The Force Awakens is the one which steals the most from A New Hope, in that it has an identical plot stuffed with twice as many characters, but it’s hardly the only offender. Last year’s Rogue One is perceived as being more inventive in comparison, but come on: it has another reluctant hero (Jyn Erso), another cave-dwelling mentor (Saw Gerrera), another pessimistic robot (K-2SO), and another swashbuckling pilot (Cassian Andor). It even has the heroes sneaking around an enemy base by disguising themselves in Imperial uniforms, just as Luke Skywalker and Han Solo did 40 years ago. And its most celebrated sequence is its Darth Vader-showcasing coda: a detailed, unabashed homage to A New Hope. 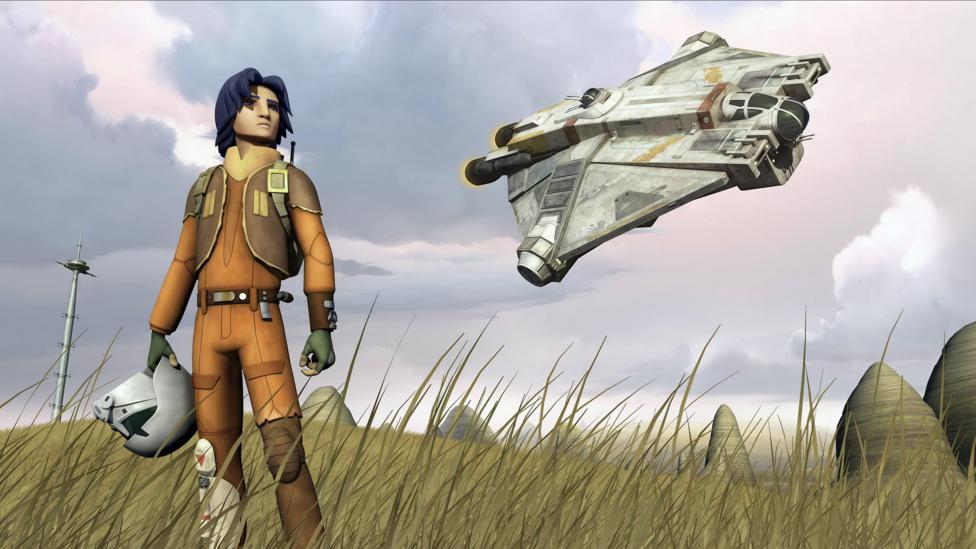 The Star Wars saga has also continued on television with The Clone Wars series and now Star Wars Rebels, which is about to enter its final season (Credit: Lucasfilm)

Shouldn’t we be asking for more from our sci-fi blockbusters? Star Wars fans, myself included, are pathetically grateful when a director changes anything. (Black armour instead of white armour! A spherical-bodied droid instead of a cylindrical one!) But A New Hope changed everything. 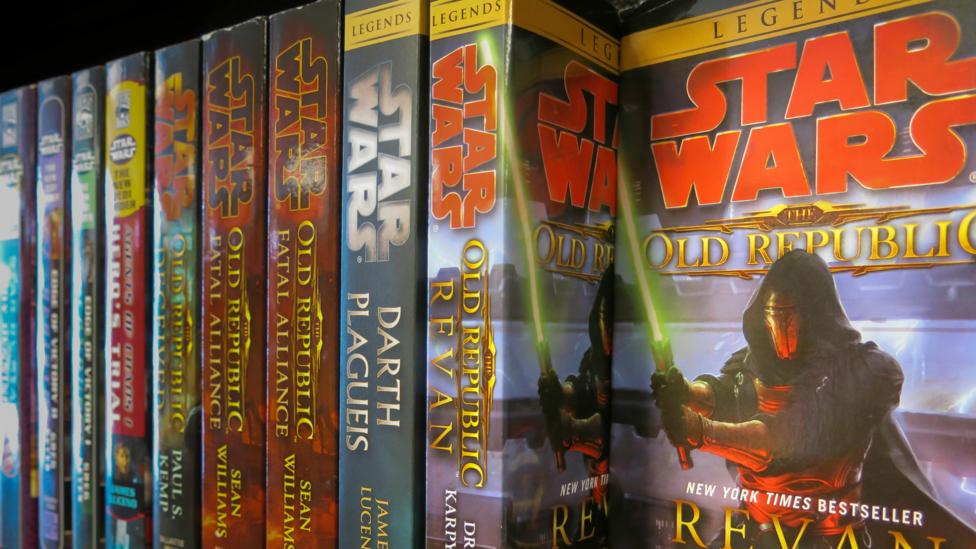 Hundreds of tie-in novels have been authorised by Lucasfilm – some of these explore the history of the galaxy thousands of years before the films (Credit: Alamy)

It’s worth remembering, too, that Lucas wouldn’t have made his paradigm-shifting film in the first place if he had secured the rights to Flash Gordon. Similarly, he and Steven Spielberg wouldn’t have made Raiders of the Lost Ark if Spielberg had been hired to direct a Bond movie. It was only because he was compelled to develop fresh characters and settings, rather than tweaking established ones, that he revolutionised mainstream cinema. Who knows what other characters and settings he might have dreamt up if Star Wars hadn’t gone on to consume his life? For that matter, who knows what his successors – JJ Abrams, Gareth Edwards, Rian Johnson, et al – might have created if they weren’t so busy imitating him?

Still not convinced? Well, bear this in mind. If it weren’t for all the sequels and prequels, we wouldn’t have to bother saying Star Wars – Episode IV: A New Hope. We could bestow the film with the monumental title it deserves, and the one it had back in 1977: Star Wars.