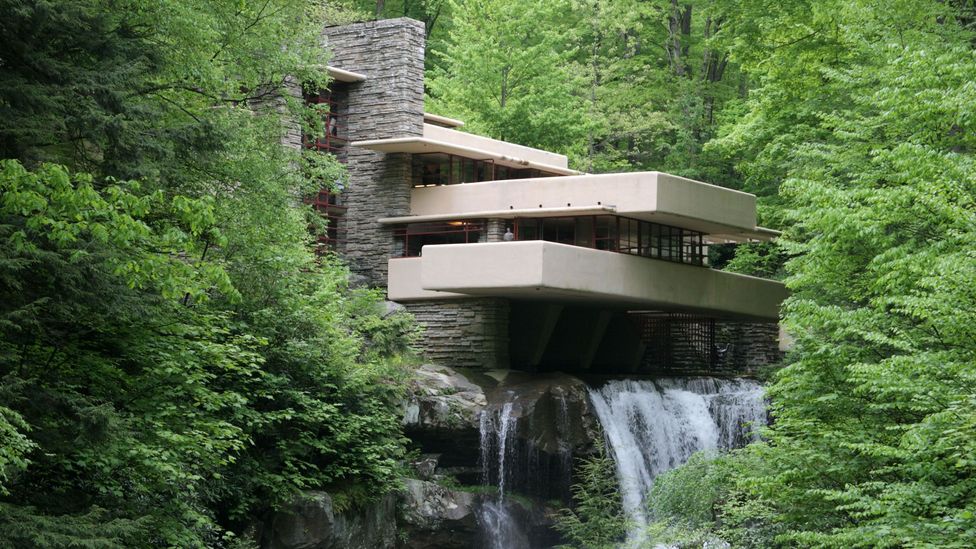 Chicago, 16 October 1956. Frank Lloyd Wright, then the most famous living architect in the US, hosted a press conference at which he unveiled The Illinois, a mile-high skyscraper four times the height of the Empire State Building. Born 150 years ago this June, Wright was 89 at the time and, with the Solomon R Guggenheim Museum under construction on Manhattan’s Fifth Avenue, as radical and as provocative as he had ever been.

The name of Wright’s god began with an ‘n’: nature

The Guggenheim project, however controversial the form of the building, had endeared him to New York’s media, with Wright appearing on the popular TV quiz show What’s My Line? in June 1956. The following September, he was twice the subject of the smoke-laced Mike Wallace Interview. You can watch these on YouTube today. Compelling viewing, the crinkle-eyed Wright comes across as smart as a whip. It does seem remarkable that you can tune in to see and hear a man born 150 years ago talking with such relevance for the 21st Century across a broad spectrum of political, ethical and, of course, architectural concerns. 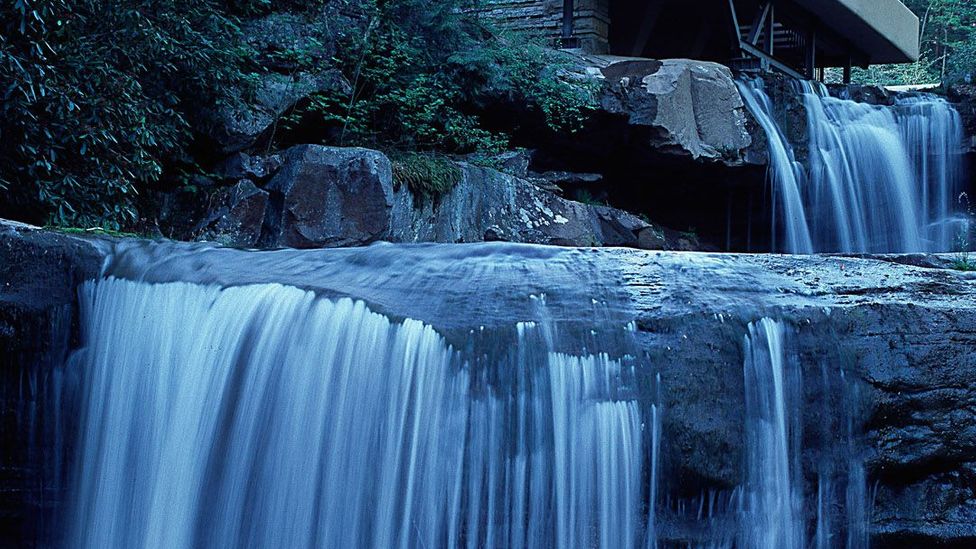 The American Institute of Architects declared Fallingwater the “best all-time work of American architecture”– it inspired the modernist house in North by Northwest (Credit: Alamy)

Wright was certainly a master of the one-line quip. He told a client who phoned to complain of rain leaking from the roof of her new house onto the dining table where she was sitting to "move the chair". On seeing his lanky engineering assistant, William Wesley Peters, inside one of his latest and rather low-ceilinged houses, he said, “Sit down, Wes, you’re ruining the scale of my architecture”. And when asked for his occupation in a court of law, he stated, “The world’s greatest architect.” When his wife remonstrated with him, he turned to her saying, “I had no choice, Olgivanna. I was under oath.” 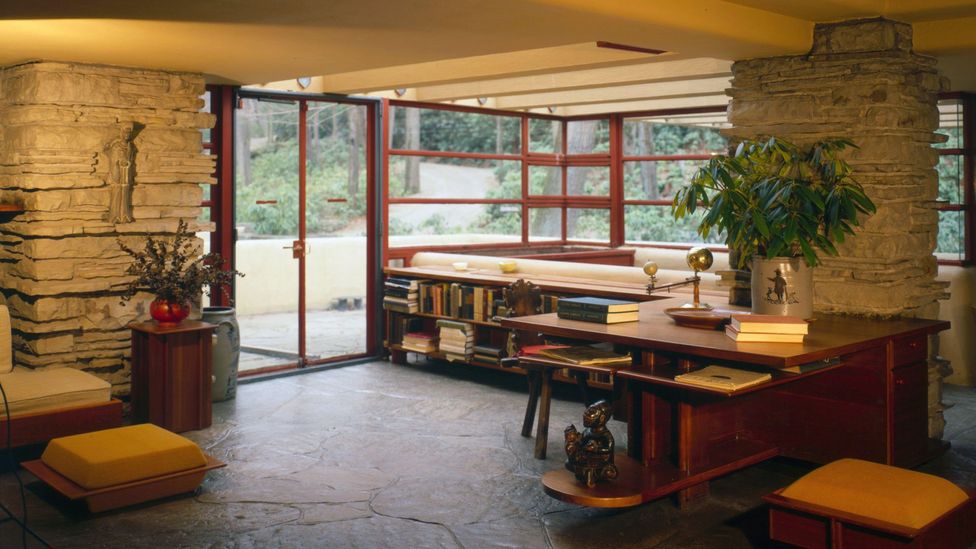 Much of the furniture in Fallingwater, such as this living room, was built into the structure so its interior design would remain fixed (Credit: Alamy)

Despite the bravura urban projects in Chicago and New York and the media attention these gave him, the octogenarian Wright had no love for cities. The name of his god, he told Mike Wallace, began with an “n”: nature. Designed to house 100,000 people, The Illinois was Wright’s way of attempting to curb urban sprawl, of trying to keep the city in its place and nature safe from its claws.

The Illinois was never built and Wright, in a career spanning three-quarters of a century, was to complete just one tall building, the 19-storey Price Tower opened in February 1956 in Bartlesville, Oklahoma. 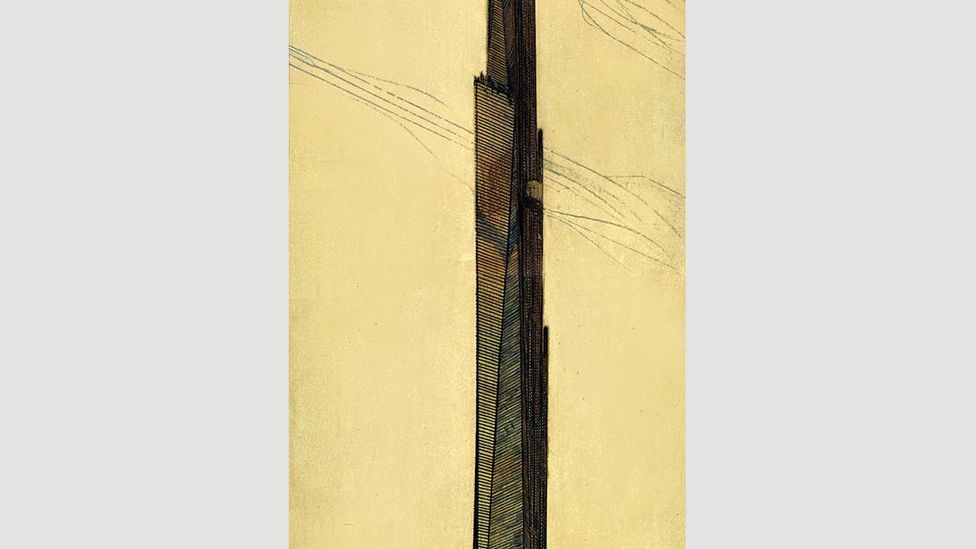 Four times as high as the Empire State Building, twice as tall as the Burj Khalifa, the mile-high, 528-floor Illinois would have had ‘atomic-powered’ lifts (Credit: Wikipedia)

Wright’s fame, however high flying his imagination, was rooted to the ground and notably so in the design of hundreds of seductive, crafted, sometimes flawed but always coveted US homes. It was one such house, Fallingwater, that revived his career in the mid-1930s when it seemed that, along with the impact of the Great Depression on home building, Wright’s work was beginning to seem old fashioned to critics and a younger generation of architects as the spirit of clean-cut European Modernism – of the Bauhaus, Le Corbusier and Mies van der Rohe – took root in the US.

I want you to live with the waterfall, not just look at it – Wright

An internationally recognised masterpiece, Fallingwater is as close to the ground and nature as architecturally possible. Built over a waterfall and with the bedrock it was anchored to rising up through the living room floor, it belongs inexorably to the Appalachian landscape it adorns. Since it was handed over to the care of the Western Pennsylvania Conservancy in 1963 and reopened as a museum the following year, some five million visitors have driven out to this remote Pennsylvanian home at Bear Run, 65 miles southeast of Pittsburgh, to marvel at the building that re-ignited Wright’s career.

This highly original and beautiful mountain retreat was commissioned by Edgar J Kaufmann, a wealthy Pittsburgh department store proprietor and his wife – also his first cousin – Liliane Kaufmann who did much to bring chic Parisian couture to the American Midwest. Kaufmann had thought of a house overlooking the waterfall at Bear Run, but Wright insisted, “I want you to live with the waterfall, not just to look at it.” 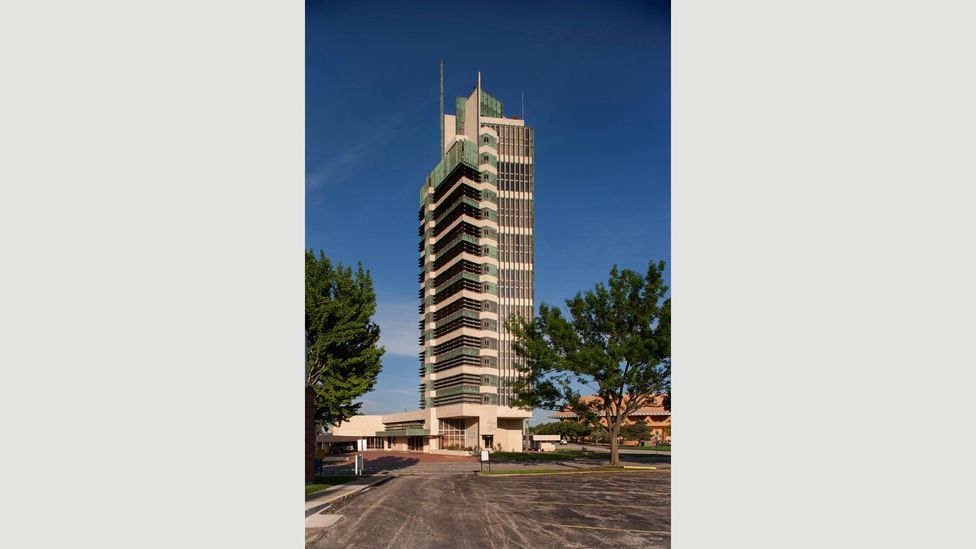 The Price Tower in Bartlesville, Oklahoma was, at 19 storeys, Wright’s only skyscraper – his next tallest was the 14-floor Johnson Wax Tower in Racine, Wisconsin (Credit: Alamy)

So, after several months pondering on what the house might be, and with Kaufmann on his tail, Wright went into creative overdrive, producing a set of glorious drawings in record time. These depicted a three level house cantilevered over the waterfall making bold play with reinforced concrete, steel, glass and local stone. It was as if the house was to be insinuated among trees, rocks, river and waterfall. 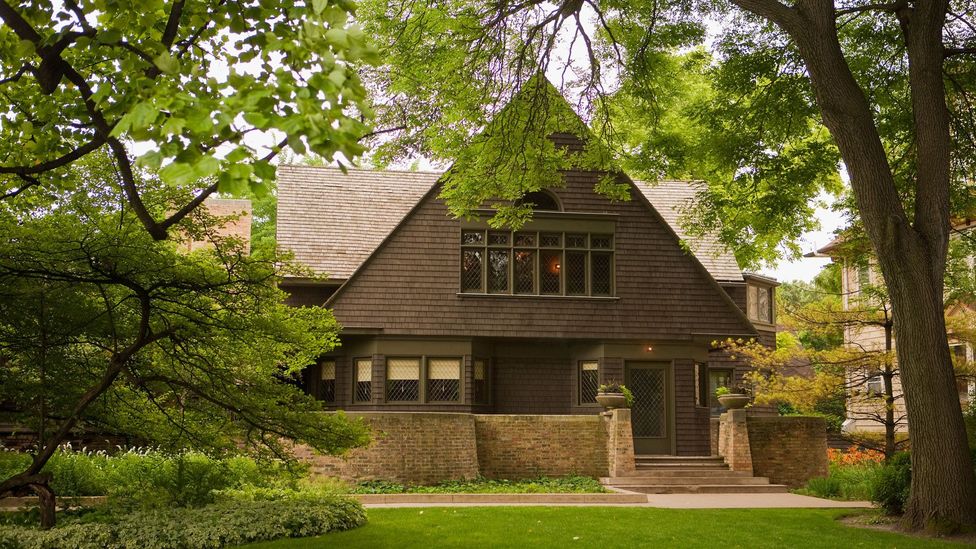 Wright’s best known for the homes he designed, including his own abode in Oak Park, Illinois, which he built in 1889 – he would live there for 20 years (Credit: Alamy)

Its daring use of cantilevers led to a row between architect and client – Kaufmann had them reinforced further and Wright threatened to resign – and indeed the great cantilevered river front of the house began to sag as soon as the concrete formwork was removed. Damp seeped up from the rushing water causing mould while roof-lights leaked.

Even so, even Liliane, who had been sceptical of the design came to appreciate the beauty of Fallingwater and its setting. Views of a “leaf-laden tree of bare interlacing branches”, seen through frameless windows were, she wrote in a letter to Wright, “a more-than-satisfactory substitute for curtains and draperies.” Fallingwater was certainly a very different architectural proposition from the Kaufmann’s Neo-Norman mansion in Pittsburgh. Wright, who designed every last detail of the house, had much of the furniture built into its walls. This was one sure way, he believed, to ‘client-proof’ his latest masterpiece. Today, the Kaufmanns have long gone, yet the interiors are much as Wright designed them. 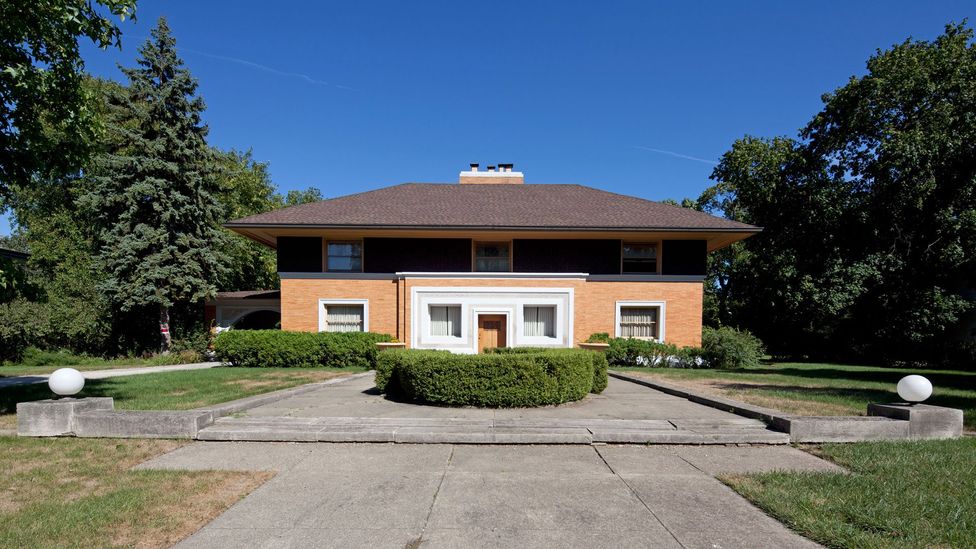 His first major work for his own firm was the Winslow House in River Forest, Illinois, which still looks up-to-date despite being built in 1893-94 (Credit: Alamy)

Completed in 1938, Fallingwater graced the cover of Time magazine that January over the shoulders, that is, of a blue-caped Frank Lloyd Wright. It was, said Time, the architect’s “most beautiful job”. It had gone way, way over budget, costing $155,000 (£120,000), the equivalent of $2.7 million (£2.1 million) today, with Wright receiving a fee of $8,000 (£6,200). The cost of the urgent restoration of the house at the beginning of this century – it was considered to be in danger of collapse – was $11.5 million (£8.9 million). A rhyme in a café on Pennsylvania’s Route 381, which passes close by, said “Frank Lloyd Wright built a house over falling water/which he really shouldn’t have oughta”, yet only the most curmudgeonly commentators have thought the millions spent on safeguarding the house for posterity a waste of money. Fallingwater may have been flawed, but its beauty is transcendent. Today, the house is priceless. 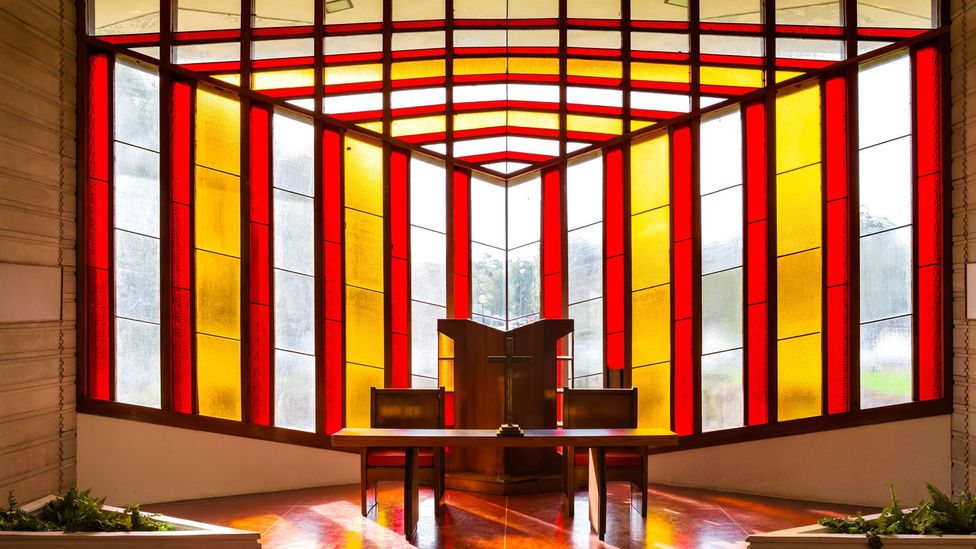 Wright also crafted stained-glass windows throughout his career, including those at Danforth Chapel at Florida Southern College, the campus of which he designed (Credit: Alamy)

In 1952, Liliane committed suicide at Fallingwater.  Edgar died three years later. Their son, Edgar Jr, who had been an apprentice to Wright in the early ‘30s, inherited the house, sharing it with his life partner, the Spanish-born architect and designer Paul Mayén who shaped the visitor centre, café and gift store that opened in 1981. It was Edgar Jr who donated Fallingwater, along with 1,750-acres of the Laurel Highlands and an endowment of $500,000 (£388,000) to the Western Pennsylvania Conservancy.

As for Wright, Fallingwater – you can find his initials in the name – sparked a revival in his career, and one that allowed him to design and build against the grain of European-influenced Modernism for the next 20 years. He remained a fiercely committed individualist, refusing to join the American Institute of Architects. When one associate called him “an old amateur”, Wright, who worked until his death aged 91 replied, “I am the oldest.”