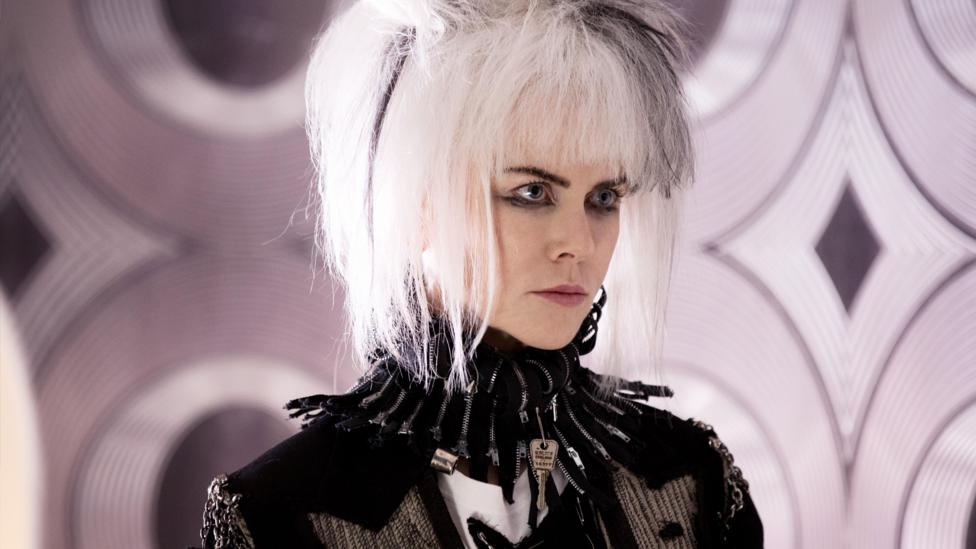 By Nicholas Barber 26th May 2017
How to Talk to Girls at Parties is the biggest flop at the Cannes Film Festival – and possibly of all time, writes Nicholas Barber.
I

It may seem harsh to say that How to Talk to Girls at Parties is one of the worst films ever made, given that it isn’t a cynical studio blockbuster, but an indie passion project with a budget that wouldn’t pay for the Botox on most Hollywood productions. But this shambolic punks-meet-aliens rom-com is directed by John Cameron Mitchell, the acclaimed auteur behind Hedwig and the Angry Inch. It’s also adapted from a short story by Neil Gaiman, it has costumes by the triple-Oscar-winning Sandy Powell, and it features Nicole Kidman and Elle Fanning. If nothing else, then, it should seem vaguely professional. Instead, it’s like a shoddy school play put on by a drama teacher who thinks he’s cool for liking the Sex Pistols.

The film is set in Croydon, south London, in 1977, a period which is a lot more significant to people who were teenagers at the time, as Mitchell, Gaiman and Powell were, than it is to anyone else. Its hero is the sensitive, artistic and annoying named Enn (Alex Sharp), one of three teenaged best mates who are redolent of the laddish trio in Ricky Gervais’s Cemetery Junction, but somehow even more obnoxious. One night they go to a punk gig in a basement club, and then go in search of the after-show party. (Did basement club gigs in Croydon in 1977 have after-show parties?) But they end up at a gathering of statuesque extra-terrestrial tourists dressed in brightly coloured, skintight latex.

The contrast between the scruffy schoolboys and the exotic aliens is the film’s central joke, but because the gathering is shot to look as cheap and nasty as everything else in How to Talk to Girls at Parties, the joke falls flat. The boys might as well have stumbled on a suburban swingers’ evening, although most suburban swingers would have more personality.

One of the aliens is the beautiful, wide-eyed Zan (Fanning), who is, of course, immediately fascinated by Enn: yes, it’s the pathetic science-fiction trope wherein a magical woman is spellbound by the first ordinary human male she meets. This adolescent convention is icky at the best of times, but it’s especially irritating in light of the film’s title. You don’t have to talk to girls at parties, it seems. Just blunder up to the most gorgeous one in the room and she’ll fall in love with you.

It may have the grubby, DIY aesthetic of punk, but it drifts around with all the focus of a prog-rock B-side

Sure enough, Zan insists on leaving the gathering with Enn so that he can show her the wonders of Earth – or Croydon, at least – before her 48 remaining hours on the planet elapse. Alas, he doesn’t find any wonders. Instead, the couple meander from place to place, exchanging painfully unfunny dialogue during which Enn explains things, and the naive Zan doesn’t understand them. Fanning gives the role her all, and confirms what a luminous and versatile actress she is, but her efforts to make the relationship seem sweet in its early stages are as doomed as her efforts to make it seem profound and serious later on. The more Zan and Enn are together, the more you wish that she would jump on the first available spaceship back to her homeworld.

Proceedings are slowed down further by debates between various extra-terrestrial non-entities played by Matt Lucas and Ruth Wilson, among others – debates which are utterly incomprehensible if you don’t have a degree in intergalactic politics. And they’re slowed down further still by the tacky computer-animated segments which would have seemed mindblowing in 1977, but not at any point since. How to Talk to Girls at Parties may have the grubby, ugly, DIY aesthetic of punk, but it drifts around with all the urgency and focus of a prog-rock B-side.

In its worst section, Zan and Enn visit a punk scenester, Boadicea, played by Kidman in a white fright wig. Her mockney accent migrates to Australia whenever she shouts –  and unfortunately, she shouts regularly, usually something embarrassing along the lines of, “Oi! Shut yer gaping gob!” But, even without that wayward accent, the character would make no sense: in 1977, punk’s godparents, such as Vivienne Westwood and John Peel, were a good decade younger than she is.

Still, in the scheme of things, that’s a minor quibble. Everything about Mitchell’s film is so misguided that he could well be an alien who has heard about such earthling concepts as ‘punk’, ‘love’, ‘comedy’ and ‘entertainment’, and who, much like Zan, hasn’t understood any of them. Nobody who isn’t from outer space should watch it.