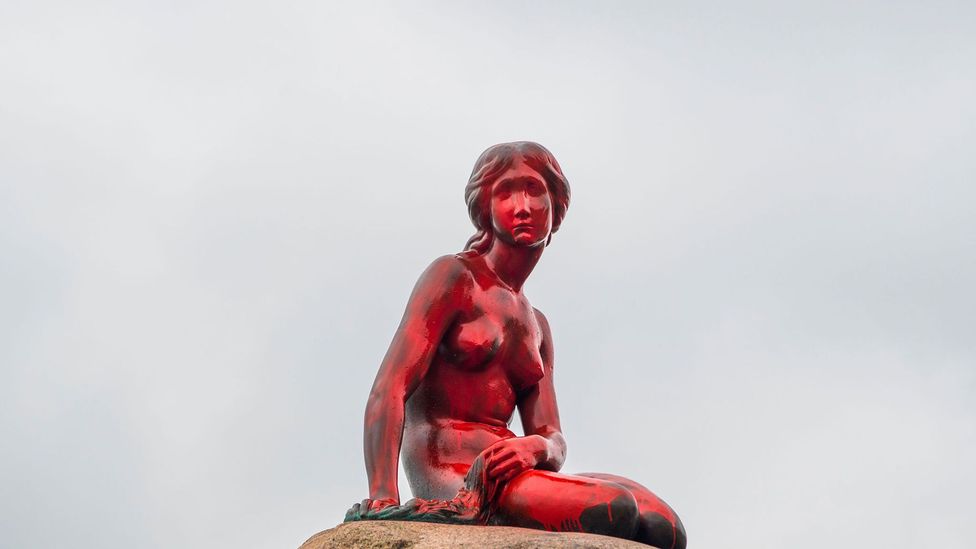 By Kelly Grovier 2nd June 2017
As protesters target a famed Copenhagen statue, it’s worth remembering how views of the mythical human-fish hybrid have changed over time, writes Kelly Grovier.

Spare a thought for The Little Mermaid. In the 104 years since the Danish-Icelandic sculptor Edvard Eriksen created his bronze statue of a young half-woman half-fish – who stares wistfully from her stony perch beside the Langelinie promenade in Copenhagen – the 1.25m (4.1ft) tall sculpture has been decapitated twice, bludgeoned in the neck in another attempt to sever the head, dismembered, defaced with luminous paint and soldered-on sex toys, and blown off her base by a bomb that sent her blast-pocked body tumbling into the harbour.

Eriksen’s sculpture was, from the first, forged in violence. It is inspired by the Danish writer Hans Christian Andersen’s unsettling tale of a lovestruck mermaid who is so desperate to gain an eternal human soul that she sacrifices to a Sea Witch her tongue, her mellifluous voice and her ability ever to return to her underwater home. The head and face are those of a ballerina, Ellen Price (who declined to model nude for the sculptor), which have been grafted onto the naked physique of Eriksen’s wife, Eline. The result is a work of enforced fusion, one that seems forever to hover on a hazy margin between states of being – fact and fantasy, hope and harm, this world and another. 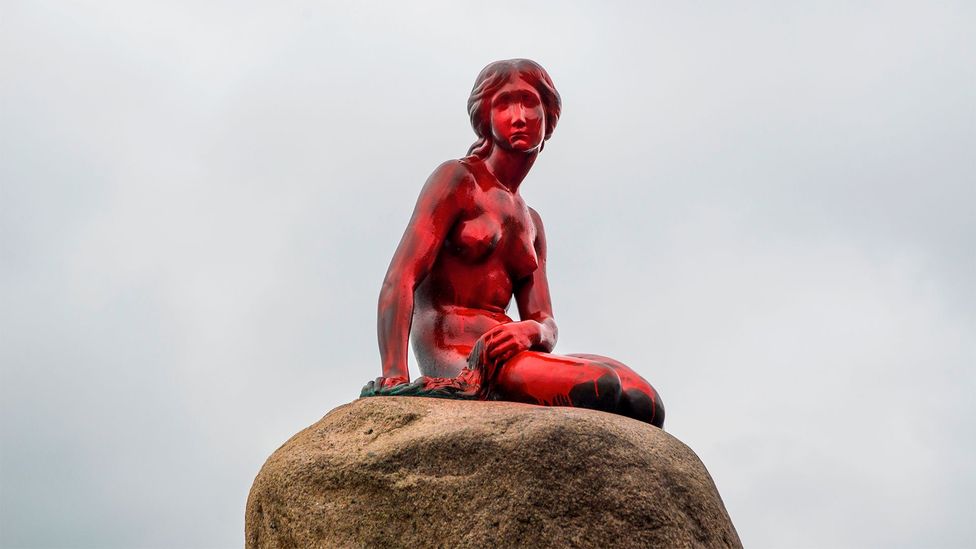 The many levels of The Little Mermaid’s disturbed and disturbing identity were brought to mind this week with the emergence in the news of a fresh image of assault that the statue suffered on the 30 May, this time at the hands of anti-whaling activists. Protesting against the hunting of long-finned pilot whales in the North Atlantic, vandals doused Copenhagen’s unofficial mascot in red paint and scrawled along the pavement nearby the plea “Danmark [sic] defend the whales of the Faroe Islands”.

Beneath the veneer of red paint, the statue’s bronze surface burns through, giving the work a lustrous haemoglobin glow, as if the mermaid were herself drenched in blood. Under a veil of vandalism, the hybrid creature can be perceived as both the perpetrator and the victim of the violence – an eerie ambiguity that transforms Eriksen’s statue from a totem of fairytale wonder into something haunting and ominous. 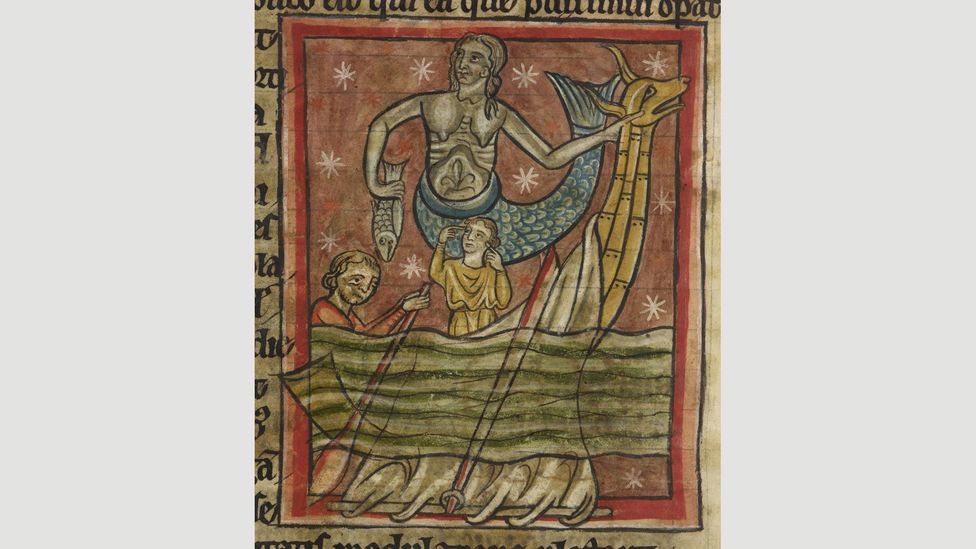 This 13th Century bestiary from England depicted a mermaid as a siren trying to lead sailors to their doom (Credit: Wikipedia)

In its defaced state, the statue’s gruesome complexion calls to mind the legend of sirens who lure boatmen to their doom with their seductive song. Long before Andersen enchantingly reinvented the mermaid in the 19th Century, eliciting sympathy from his readers for her tragic fate, a more lethally enticing incarnation of the creature troubled the imagination of readers of a lavish 13th Century bestiary – or illustrated compendium of real and fabled beasts.

Created by a medieval English artist whose name has since faded into the fog of history, the image of a fish-woman sinisterly singing to sailors who try desperately to plug their ears, is among the more intriguing illustrations in the volume. Inauspiciously, the sepia-soaked sky surrounding the mortal figures appears clotted with blood. That one of the grim-faced sailors is clad in blood-red attire and weakly clings to a blood-red oar, does not bode well for their survival. Placed alongside this week’s photo of the defaced Little Mermaid of Copenhagen, the ancient illustration reveals just how deep the symbol of the mermaid has dived into the cultural imagination.