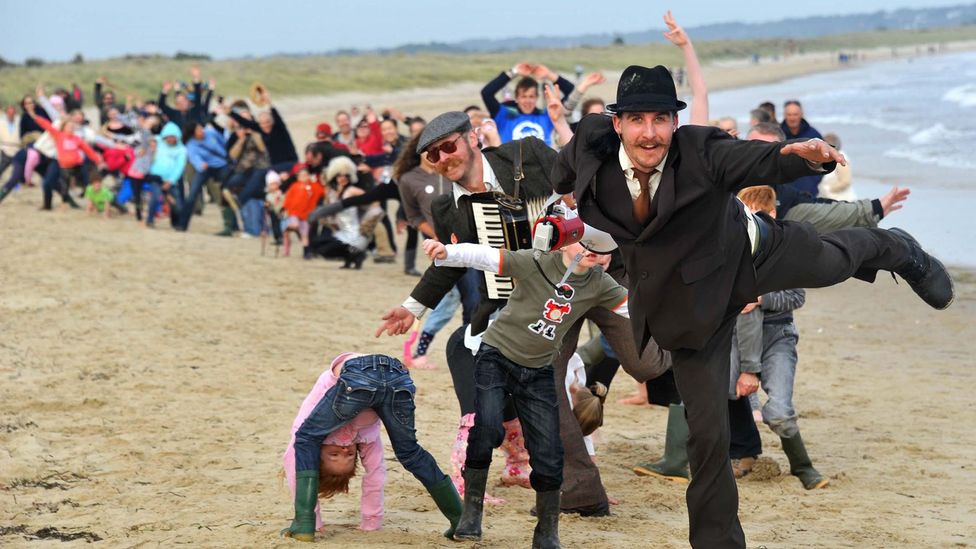 By Christine Ro 19th June 2017
From ‘gazump’ to ‘gobsmack’, ‘squiffy’ to ‘snog’, British English is full of words that sound like barmy balderdash. Christine Ro explains why.

“That wazzock dared to gazump me; I'm gobsmacked by this sticky wicket full of codswallop that's gone pear-shaped!”

That sentence may not sound serious. But the situation it describes is. Translated into standard English, it would be something like “That idiot dared to offer more money for the house after my offer already had been accepted; I'm shocked by this tricky situation full of nonsense that's gone awry!”

Shakespeare, this isn’t. The first sentence sounds so peculiar to certain ears not just because of the mangling of parts of speech. It’s also full of words, with origins ranging from the 1700s to the 1980s, that have two qualities in common: they’re all rather silly-sounding, and they’re all British English.

British English is full of whimsical terms like these. They reflect the UK’s cultural appreciation of wit, a long tradition of literary inventiveness – and Britain’s fluctuating global influence over the centuries.

Whimsical words like these are formed in a number of ways. These include blends of other words (eg ‘Oxbridge’, from Oxford and Cambridge); reduplicatives, which repeat sounds or parts of words (‘higgledy-piggledy’); back-formations, which often remove the suffix of their originating word (like ‘kempt’, from ‘unkempt’); and of course sheer nonsense (like Roald Dahl’s invention ‘gobblefunk’). 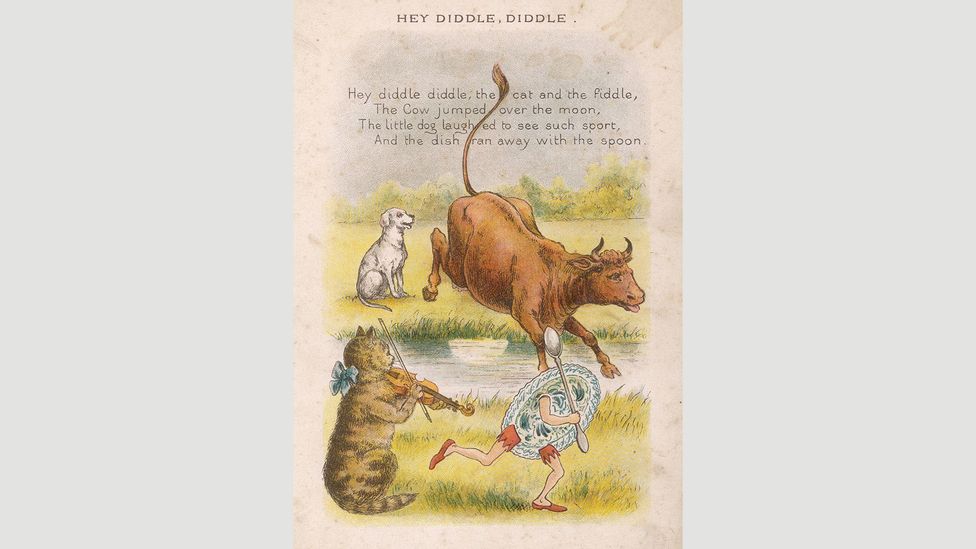 Because English is largely a monosyllabic language, word games (and nursery rhymes) are made relatively easy (Credit: Alamy)

These types of coinages aren’t unique to English, let alone British English. But the relative simplicity of English words may lend itself to this kind of play, says Anatoly Liberman, professor of languages at the University of Minnesota and an etymology blogger for Oxford University Press. “English is largely a monosyllabic language (‘come’, ‘go’, ‘take’, ‘big’, ‘laugh’, and so forth),” he says. “This makes such games easy.”

Especially characteristic of these formations in British English is the way they reflect a certain kind of humour. Pop anthropologist Kate Fox has written about the English “ban on earnestness” (an aversion to taking things too seriously) and the pervasiveness of humour in social interaction. This humour is of a particular kind: self-deprecating and given to understatement and irony.

It’s unsurprising that this national trait has made its way into the language. Romantic activities (like ‘snog’ and ‘shag’) are spoken of in childish terms. Classic dishes are made to sound deliberately unappetising (‘dead man’s arm’ and ‘Eton mess’ – respectively, a rolled cake filled with jam and a dessert combining meringue, strawberries and cream. And there’s a healthy appetite for nonsensical ambiguity. To take just one example, ‘ladybird’ is a bugbear of perplexed Americans who wonder – although their version of the word is only slightly more sensible – “Why ladybird? Why not ladybug?”

This hints at a gleeful willingness in British English to dispense with literal meaning. Food, for instance, is a rich vein of words like this. ‘Fairy cake’, ‘toad in the hole’, and ‘jacket potato’ have nothing to do with fairies, toads and jackets.

There’s a long tradition in British English of inventing words just for the fun of it. Eminent linguist David Crystal writes in The Story of English in 100 Words that ‘a gaggle of geese’, ‘an unkindness’ of ravens’, and other collective nouns of this ilk were created in the 15th Century. He speculates that this was done deliberately for comic effect, giving rise to ‘a superfluity of nuns’ (pun intended).

There were more people writing, and there were no dictionaries to act as a stabilising influence – David Crystal

While whimsical British terms have been coined in every era, certain periods have been especially fruitful. According to Crystal, linguistic inventiveness, particularly of a playful kind, seems to have peaked in the Elizabethan era. This is partly due to the enduring influence of wordsmiths like Shakespeare and his fellow dramatists. Meanwhile, Crystal adds, at this time “there were more people writing, with pressure to produce new plays to feed the daily demands of the new theatres. And there were no dictionaries to act as a stabilising influence.” This created a climate of lexical creativity, which we can thank for words like ‘balderdash’ (meaning, appropriately, a nonsense word or idea).

Here are seven of our favourite silly-sounding British words:

Since Shakespeare, British writers from Charles Dickens (‘whiz-bang’) and Lewis Carroll (‘mimsy’) to JK Rowling (‘muggle’) have continued to enliven English vocabulary. As Liberman points out, it’s not that these authors had a monopoly on childlike wit. Rather, historically, British English’s “influence was mainly exercised by great authors,” he says. “The joys and charm of British English have to be sought in the works of the great wits of various epochs. For comparison, in the US, the only figure of comparable size – in this respect – is Mark Twain.”

Of course, there’s a risk of over-interpreting the relationship between culture and vocabulary. Fanciful terms can be found in all varieties of English: linguists also have written about how terms like ‘face like a dropped pie’ and ‘cultural cringe’ reflect an Australian culture of informality and ‘mateship’.

To make matters more complex, the border between British and American English – the two most influential forms of English – is fairly blurry. In fact, many of the words popularly believed to stem from one country actually originated in the other.

The University of Sussex’s Lynne Murphy, who has a blog and a forthcoming book about differences between US and UK English, notes that many Americans incorrectly think ‘bumbershoot’ and ‘poppycock’ are British words. That’s simply, she says, because “a lot of Americans stereotype the British as having silly words.” So words that fit that expectation are the ones that gain a great deal of currency overseas.

This is also true of terms that mainly sound comical due to their difference from US terms. Murphy explains that Americans love slang with a (non-flattened) short ‘o’ sound, such as ‘cosh’, ‘bollocks’ and ‘dogsbody’, because “that’s a sound that Americans don’t make”. 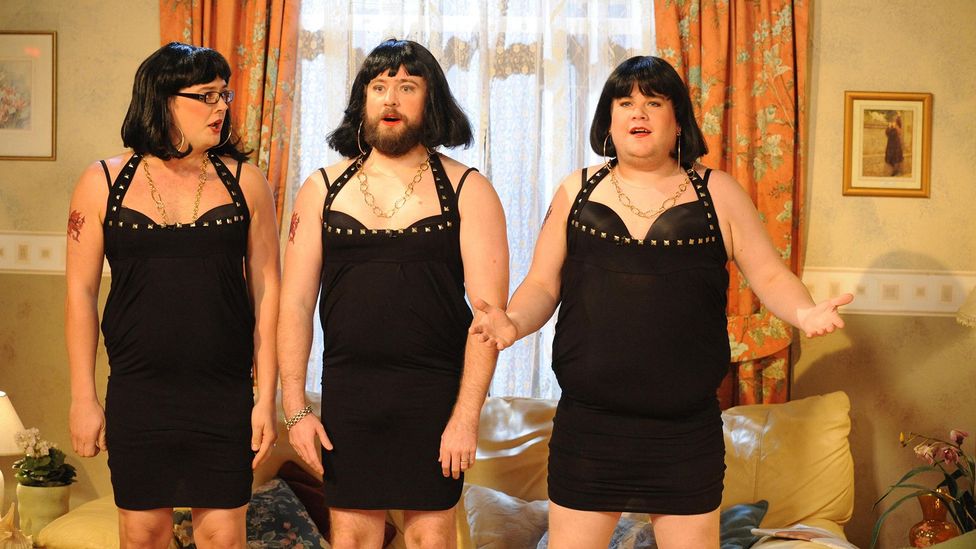 British comedian James Corden, shown here in a sketch at right, had to take care with which words he used when he began hosting a US chat show (Credit: Alamy)

Even off-colour words can come to seem charming, if they’re sufficiently British and familiar. For instance, there were reports that before James Corden started hosting his late-night chat show in the US, his network instructed him that ‘shag’ and ‘squiffy’ were acceptable, but potentially puzzling words like ‘knackered’ weren’t.

Today, a great deal of lexical innovation in English is coming from multilingual places, often former British colonies. One habit is transforming the meaning of British or American words (for example, the word ‘deadwood’ means ‘unproductive civil servant’ in Botswanan English). Another is coining words to refer to locally specific situations (like ‘killer litter’ in Singaporean English, referring to the dangerous practice of throwing objects off tall buildings).

Not all of these ‘New Englishes’ are deliberately aiming to be humorous. Take Nigerian English, for example, with its delightful coinages like ‘go-slow’ for ‘traffic jam’. Farooq Kperogi of Kennesaw State University in the US has written extensively about Nigerian English. He says that the humour of terms like ‘go-slow’ (and archaic turns of phrase like ‘men of the underworld’ rather than ‘criminals’) is inadvertent. “One of the abiding features of Nigerian English is excessive lexical formality even in informal contexts, which produces unintended comical effects in native-speaker ears,” he notes. “There is nothing in Nigerian English that is purposely humorous.” 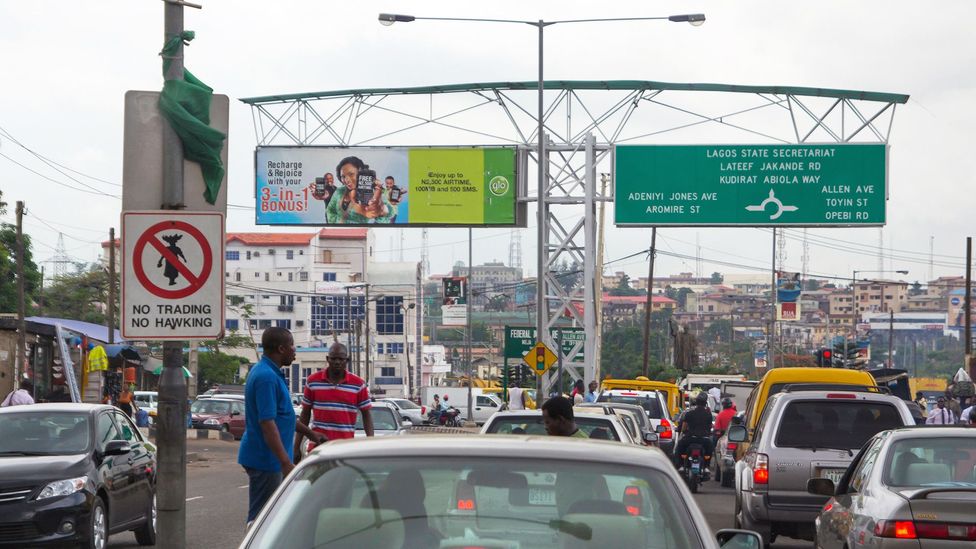 But unfamiliarity and unexpectedness can give this kind of creativity a comic effect. And in Nigeria, Kperogi explains, “unintentional humour almost always occurs when Nigerian English, which is fundamentally rooted in British English, collides with American English”.

However, given the continued primacy of British and American English, amusing words from other forms of English have been slow to reach the global mainstream. This may change, though. With the increasing influence of Nigerian and Indian cinema, for instance, it may only be a matter of time before a word like ‘prepone’ – an antonym of ‘postpone’ in Indian English – enters the vocabulary of British English speakers.

culture
1Why are British place names so bizarre?
culture
2How to swear like a Brit
Counterpoint
3The dark side of nursery rhymes
Around the BBC