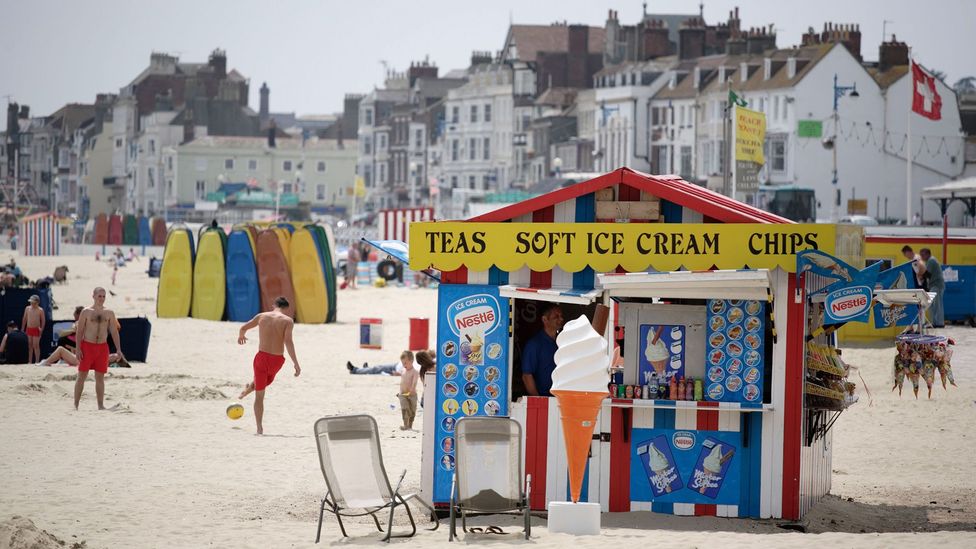 By Arwa Haider 26th June 2017
The British seaside may make you think of sunshine and candyfloss – but its edgy, rule-breaking undercurrent has inspired artists from Martin Parr to Morrissey to Graham Greene.
A

At the entrance to Margate’s newly reopened Dreamland theme park, there is a sculpture created from the salvaged scraps of former fairground rides. Entitled Be Entranced, it is a colourful mash-up of coastal carnival motifs. At its heart is a red devil rising from flames poised to make mischief.

The image feels apt. The British seaside has cast a spell on pop culture over many generations, but it has never banished its demons. Despite a ‘candyfloss culture’ of sweet treats, bright sun and giddy day-trippers, it also has an edge: the promise of escape and excess. That edge is exactly why artists, writers and film-makers seem to find it so alluring.

That has been due in part to a stumbling economy. Once-booming coastal resorts fell into decline around the 1960s and 1970s, suffering from the closure of railway lines and from a new wave of affordable flights abroad. More recent recessions hit seaside towns including Margate, Blackpool and Hastings particularly hard, with the Office of National Statistics reporting increasing deprivation in the poorest spots. At the same time, seaside towns have seen the arrival of high-end art venues such as Margate’s Turner Contemporary and Hastings’ Jerwood Gallery – as well as the multi-million-pound revival of Dreamland, which originally dated from 1920, but had closed in 2003.

That tension between ‘respectability’ and grittiness is deeply felt – particularly by artists and writers.

The seaside’s portrayal in pop culture traditionally has been dark and heady, not least in Graham Greene’s 1938 novel Brighton Rock, featuring cold-blooded young killer Pinkie. Somewhat quaintly, the introduction to the 1947 film version seems anxious not to taint the reputation of this “large, jolly, friendly seaside town in Sussex”, displaying the disclaimer that rather, it recalls “another Brighton of dark alleyways and festering slums… the poison of crime and violence and gang warfare… now happily no more”. Brighton would recur as a battleground in the 1979 film Quadrophenia, 1988’s gay coming-of-age adventure The Fruit Machine and Helen Zahravi’s 1991 novel, the feminist revenge thriller Dirty Weekend (which was adapted for film by Michael Winner in 1993). 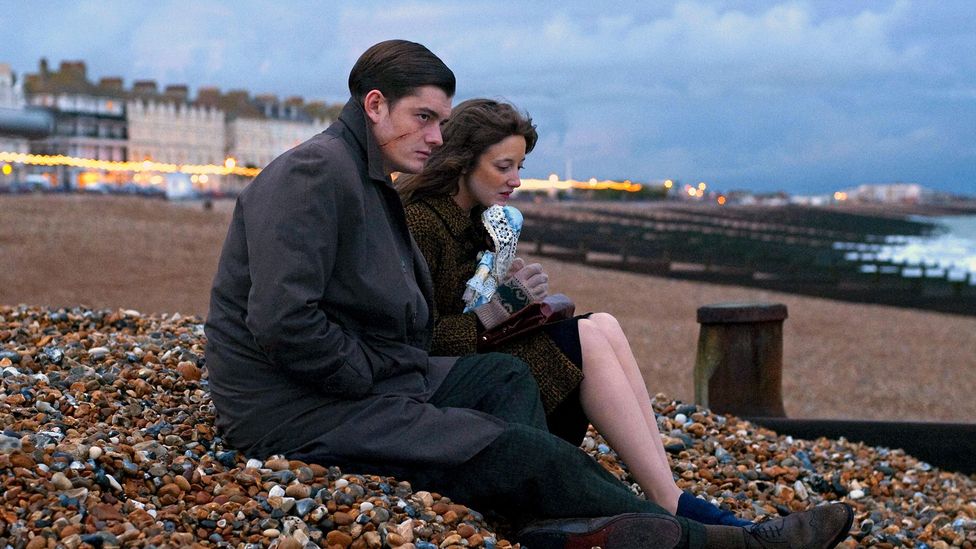 The 2010 film Brighton Rock, based on the Graham Greene novel of the same name, provides a dark portrayal of the seaside town (Credit: Alamy)

“The seaside encourages and capitalises on transgression,” says Brighton-based cultural commentator Andy Medhurst. “Seaside culture is somewhere [where] the everyday rules of behaviour are put on hold. Compared to the average working week, where most people have to do set things at set times for set rewards, the seaside is a zone where all bets are off. It gives us the opportunity to write our own rules; in some cases, that can mean the usual codes of respectability cease to hold much sway.

“Seaside towns are literally and metaphorically on the edge. They give a very particular perspective. When you look back inland, nothing seems as settled as it once did – and those instabilities can be culturally productive.”

The clash of brightness and bleakness has coloured the visual art of the British seaside, as well. Donald McGill’s iconic ‘saucy postcard’ illustrations are both provocative and grotesque; now coveted by collectors, they were plagued by anti-obscenity laws in the mid-1950s. Photographer Martin Parr’s hyper-real documentary images (partly inspired by the 1960s holiday postcards of John Hinde) earned notoriety with his mid-1980s series The Last Resort, shot in New Brighton. It was simultaneously praised and panned for its brashly coloured shots of working-class leisure. Meanwhile, Margate’s most famous export, Tracey Emin, reveals a tale of wayward youth (and ultimately, escape) in Why I Never Became A Dancer (1995). “But there were no morals or rules or judgements,” she reveals in the film. “I just did what I wanted to do.” 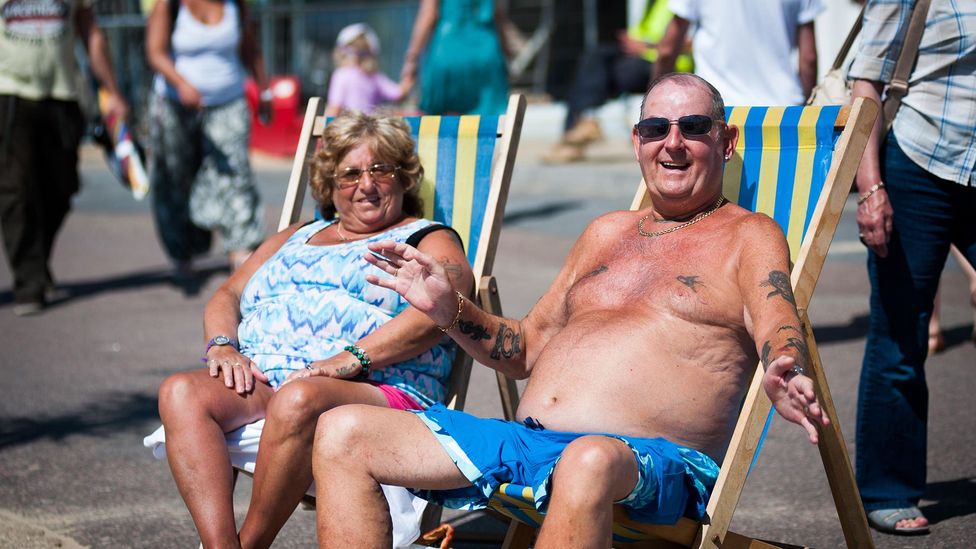 For both tourists and artists, much of the seaside’s appeal comes from its association with less structure and more freedom (Credit: Alamy)

Margate’s Turner Contemporary has exhibited works both by Emin and by its namesake, 19th-Century landscape artist JMW Turner. “Turner made repeat visits to Margate because of the quality of the light – but it was also the romanticism of the place that captured his imagination,” says gallery director Victoria Pomery. “For many, the seaside is associated with memory, less structure and more freedom – hence its timeless appeal for so many artists.”

Seaside resorts have spawned multi-genre music scenes, though their once-packed piers and pavilions have lapsed into seasons of washed-up entertainers. But that trend may be shifting. Newer big-name programming is taking place at venues from Blackpool Tower Ballroom to Bexhill-on-Sea’s De La Warr Pavilion as well as Dreamland, and British acts including alt-j and The Libertines have announced seaside tours.

Still, Morrissey’s 1988 hit Everyday Is Like Sunday (and its video shot in Southend-on-Sea) lingers as the ultimate catchy seaside lament about “the coastal town/ That they forgot to shut down… Come, Armageddon, come!”

“There’s a sense of the ‘end of the line’,” says Rebecca Ellis, Dreamland’s director of events and programming. “That feeling of abandonment is where the darker, seedier side of the seaside comes from.”

It’s unsurprising that scepticism surrounds the gentrification of coastal resorts and the influx of ‘DFL’ (down from London) hipsters seeking cheap property. In towns like Margate, kitsch vintage boutiques spring up yards from run-down charity shops.

But it’s arguable that, even against such forces, the British seaside exudes a defiant strength. The North Yorkshire resort of Whitby (a landing-spot in Bram Stoker’s 1897 novel Dracula) has drawn international crowds for a bi-annual Goth Weekend since 1994. Street art legend Banksy’s 2015 ‘bemusement park’, Dismaland, transformed a disused lido in Weston-super-Mare into a dystopian satire of death, decay and violence for five weeks – and tourism bosses reported that it brought in £20 million ($25m) to the town.

Back at Dreamland on a scorching summer day, the future feels positive, even with darker histories on display. The seafront site is a survivor of thwarted ambitions (its ballroom building was originally intended to be Margate’s second railway station; its grand cinema still lies dormant; ornate tin ceilings have been left pockmarked by 1980s “modernisation”). It is surreally beautiful, with its 1920 scenic railway, the oldest roller coaster in Britain, repaired from recent fire damage.

Its past ghosts still seem at play among the attractions, from Edwardian revellers in the arcade to Antony Gormley’s towering Waste Man sculpture – which was constructed with refugee groups on Dreamland’s derelict site in 2006 and publicly torched for Penny Woolcock’s art project The Margate Exodus.

The British seaside retains its weird and wonderful dark side – and it keeps going, because nobody could go any further.

culture
1Britain’s seaside ruins
culture
2The secrets hidden in Constable’s skies
culture
3Broken-down Britain
culture
4How can you resent Winnie the Pooh?
Around the BBC