Loading
Film | Film Reviews
Film review: War for the Planet of the Apes
Share using EmailShare on TwitterShare on FacebookShare on LinkedinShare on Whatsapp 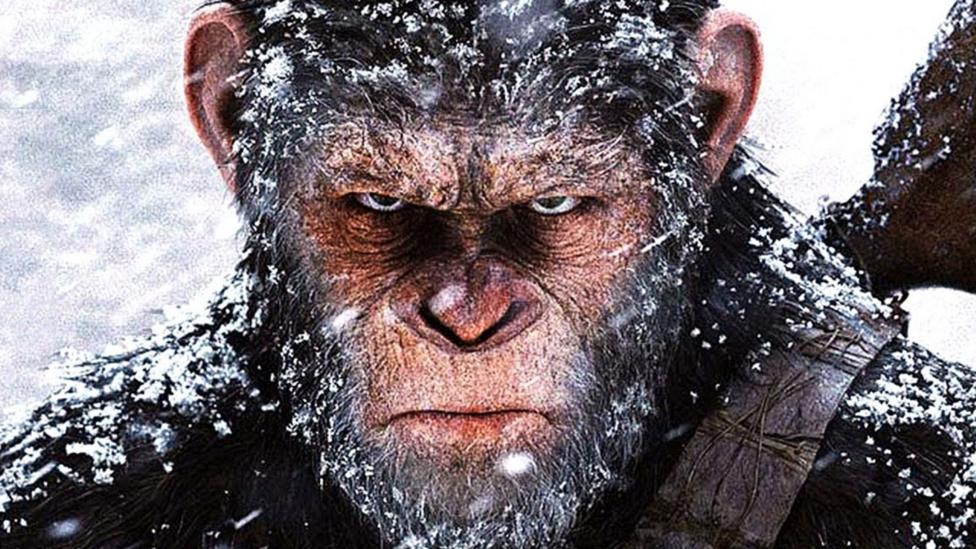 By Nicholas Barber 7th July 2017
The latest in the Planet of the Apes franchise is a guerrilla (and gorilla) warfare-turned prison-break movie. But is it any good? Nicholas Barber takes a look.
T

To begin with, though, it looks as if it’s going to be a full-on war movie. The third film in the rebooted Apes series, War for the Planet of the Apes is set 15 years after a ‘simian flu’ wiped out most of the homo sapiens on Earth while boosting the brain power of our big-eared, long-armed cousins. Civilisation as we know it no longer exists, but a tribe of intelligent apes has established a comfortable forest encampment.

The tribe’s wise leader is the franchise’s hero, Caesar (Andy Serkis). Now married with children, and with some grey in his fur, he just wants to relax and work on his banana recipes. But then the encampment is raided by a human commando team, and it’s time for some guerrilla warfare (and indeed gorilla warfare) with lots of allusions to Vietnam: the screenwriters are particularly fond of the double meaning of ‘Kong’.

If you aren’t a fan of watching primates on pony-trekking holidays, you may well wonder when the plot is going to get underway

These scenes are brutally effective, and they introduce some ingenious ideas: several treacherous apes, nicknamed ‘Donkeys’ after the Donkey Kong arcade game, are willing to collaborate with the humans. But the jungle-combat segment is over all too soon. After a bullet-headed army colonel (Woody Harrelson) murders two of Caesar’s relatives, Caesar and three of his sidekicks leave their home to go on a revenge mission. First, they plod on horseback across snowy mountains in search of the colonel’s base. Then they stop and pick up another sidekick, before doing some more plodding. And then they stop again and pick up yet another sidekick, before the plodding starts all over again. The wilderness vistas are stunning, but Caesar and the others make achingly slow progress through them. If you aren’t a fan of watching primates on pony-trekking holidays, you may well wonder when the plot is going to get underway.

Half the film is over before Caesar tracks the colonel to a hellish concentration camp, in which hundreds of apes are locked in cages. At this stage, the film changes genres once again. Having been a guerilla-war movie, and then a quest movie, it becomes a prison-break movie. As horrific as some of the imagery is, however, it’s fundamentally a contrived and clichéd prison-break movie, with a convenient network of tunnels right beneath the concentration camp, and armed guards who are kind enough to vanish into thin air whenever Caesar needs them to. As a friend of mine put it: “It’s just Chicken Run with monkeys.”

What’s disappointing about all this is that the Planet of the Apes franchise is so impressive in so many ways. None of the three films (so far) has beaten the 1968 original, but they’re all approximately 87 times cleverer than Tim Burton’s ludicrous 2001 ‘re-imagining’. The director and co-writer of the latter two episodes, Matt Reeves, has made some especially brave choices. The tone of his films is uncompromisingly bleak, and much of the dialogue is subtitled: Caesar aside, the apes communicate in grunts and sign language. The CGI is frighteningly advanced, too. The textures of leathery skin and thick hair are so convincing that you quickly forget that you’re watching actors in motion-capture suits. You feel as though you’re watching real live apes, even if those apes are carrying assault rifles and riding horses.

War for the Planet of the Apes doesn’t have anything to say about today’s society, in sign language or otherwise

But the script falls a long way short of its towering visual effects and its portentous atmosphere. In narrative terms, it’s quite small and insignificant for a film with ‘Planet’ in the title. The colonel turns out to have nothing to do with the US government or any kind of organised resistance network: he’s a lone crackpot with a zeal for butchery and philosophical monologues, and a small band of soldiers under his command. (The film jokes about his resemblance to Colonel Kurtz by having ‘Ape-Pocalypse Now’ scrawled prominently on a tunnel wall.) A new strain of simian flu, meanwhile, is mopping up the last of the human race. What this means is that the war for the planet is essentially over. It doesn’t really matter whether Caesar defeats the colonel - and you can probably guess if he does - because humans are going the way of the dinosaurs whatever happens. Is that something we should be pleased about? Over all, the apes seem to be a perfectly decent bunch, but hardly any of them have distinctive or engaging personalities, so why should we care if they inherit the earth?

In thematic terms, the film is pretty insignificant, too. The previous instalment, Dawn of the Planet of the Apes, had characters - ape and human - with complex motivations and tricky dilemmas, and a plot that examined why violence was so counter-productive and yet so difficult to avoid. But War for the Planet of the Apes doesn’t have anything to say about today’s society, in sign language or otherwise. The colonel may like to pose next to a US flag, and he may force his ape slaves to build a huge wall, but anyone looking for Trump-era political commentary won’t find much else.

Too gloomy to provide many summer-blockbuster thrills, but too silly to be a serious art-house allegory, the film is best left to completists. It just isn’t a very profound or moving film - although it does sometimes ape one.