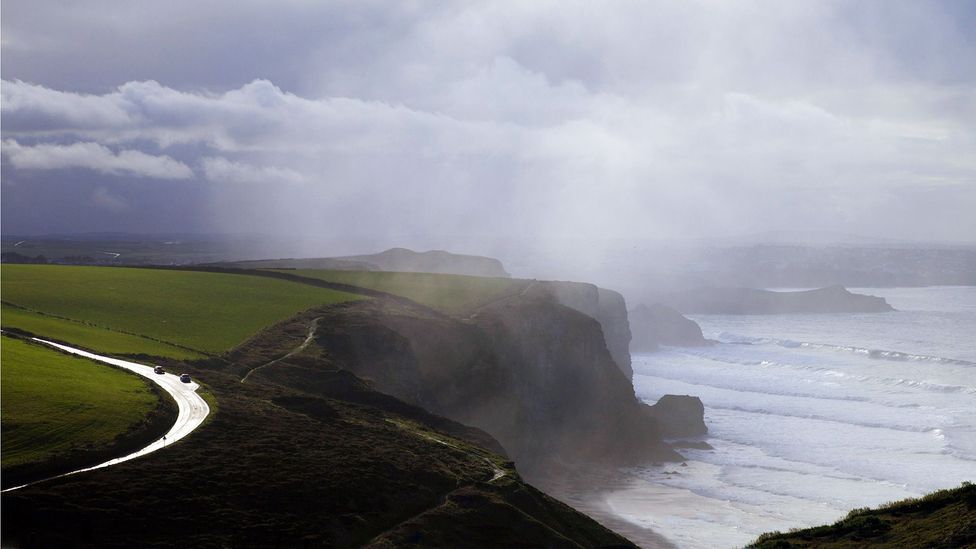 By Christine Ro 12th July 2017
From ‘moor-gallop’ to ‘Northern nanny’, ‘stoating’ to ‘specking’, British English has hundreds of words for weather – and no, not all of them mean ‘rain’. Christine Ro investigates.
I

It’s no secret that Brits love to talk about the weather. It’s essentially a national pastime. This is a country, for instance, where the Shipping Forecast is a beloved institution, even among the vast majority of Brits whose livelihoods don’t depend the sea.

All of this talk about weather has led to a number of words that enliven British English. Take ‘Northern nanny’, which describes cold hail and windstorm coming from the north, or ‘moor-gallop’, a sudden squall on a moor. Lexicographer Susan Rennie says that English dialects are “rich in weather words and I love ‘dinderex’, a Devon term for a bolt of lightning which literally means ‘thunder-axe’.”

As the UK is marked by a high density of regional accents and dialects, many of these words are very local. It’s clear that there are geographically specific patterns to the use of weather words. One example comes from the BBC’s Voices project, which in 2005 aimed to map current patterns in language use. This showed that the UK’s 10 favourite words to describe a light rain included ‘picking’, although this is mainly used in a few parts of Wales.

Like England, frequently wet Wales is a rich source of expressions for rain, including ‘it’s raining old women and sticks’. We also see a wealth of rain words in Scots. Rennie is the editor of the Historical Thesaurus of Scots (HTS), an online collection of Scots vocabulary to which the public can contribute words and images. The HTS contains over 600 words related to rain – and more than 400 related to snow.

British English is particularly rich with words for bad weather, rather than sunshine (Credit: Alamy)

“It is not surprising that there are far more words for bad weather in both English and Scots than for good” weather, says Rennie. “Partly this is because, over the centuries, our ancestors have encountered more distinct types of rain, wind and snow than sunshine. But it also reflects the potential dangers posed by bad weather and the need for exact and unambiguous communication.”

Back in Britain, weather words aren’t just many and diverse – they also show a whimsical attitude towards language. After all, Brits love wordplay. How many other nations have a game show with a resident lexicographer, like Countdown’s Susie Dent? This fascination with language games extends to the way Brits talk about the weather. Describing a storm as a ‘hurly-burly’ is one example. The onomatopoeia of ‘feefle’, a Scots word for snow swirling around a corner, is another.

Weather is compared to food, as with ‘custard wind’ (cold, easterly winds on England’s northeast coast). It’s likened to animals, for instance a ‘cat’s nose’ (cool north-westerly wind), or ‘raining cats and dogs’ (the exact etymology is contested, but the phrase has English origins). ‘Cow-quaker’ refers to May storms after cows were let into the fields, while a ‘lambing storm’ is a light spring snowfall. In Scots, small broken clouds can be described as ‘horse-guts’. But, Rennie points out, “there are human metaphors too, such as ‘pouthered lawyer’, a term from the 19th Century that describes a fluffy cloud that resembles a powdered lawyer’s wig.” 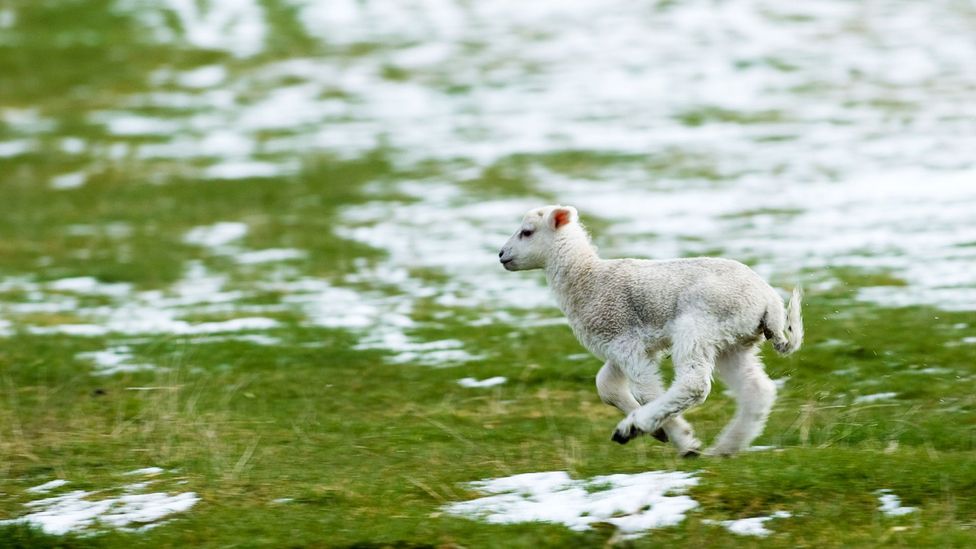 It’s not difficult to figure out why a light spring snowfall is known as a ‘lambing storm’ (Credit: Alamy)

Whimsical weather words aren’t the sole purview of the British. Other variants of English also have plenty. There’s ‘sugar weather’ in Canada, to describe the cold weather that gets maple syrup running, and ‘toad-strangler’ (very heavy rain) along the Gulf Coast of the US.

But many of these colourful words aren’t used very often these days. Veale notes that when it comes to regionally specific terms, like Nottingham’s ‘goose fair morning’ to describe a bright but cool daybreak, “many have probably fallen out of common usage as people have become detached from or less dependent on the weather for their fortunes.” 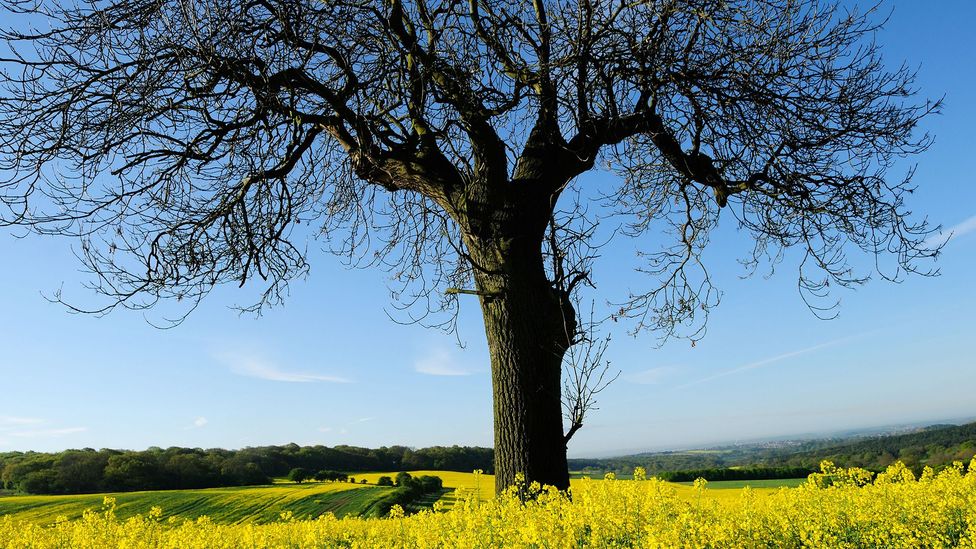 A bright, but chilly morning in Nottinghamshire is known as a ‘goose fair morning' (Credit: Alamy)

Clifford Sofield, senior assistant editor of the Oxford English Dictionary, says that three types of weather-related words tend to sound comical to the ears of English speakers. Firstly, “words that sound peculiar to a person are ones that they’re not familiar with or words that they have heard but haven’t used themselves.” These include terms that were once used more widely, but now have become regionalisms. For example, ‘airish’ (for cool weather) is now mainly used in Scotland – and the southern US.

Secondly, words and usages that have become obsolete strike us as odd. Shakespeare used ‘naughty’ to describe the weather in King Lear; a University of Liverpool research project which is examining historical records of UK weather events has uncovered examples of the weather being described as mischievous or misbehaving. But it would be eccentric to refer to a naughty wind today.

Finally, Sofield says, there are weather words that are new or sound like they’re new. ‘Mizzling’ might seem like a neologism combining mist and drizzling, but it actually derives from the Dutch ‘miezelen’ (drizzle) – which itself may stem from words for ‘urinate’. 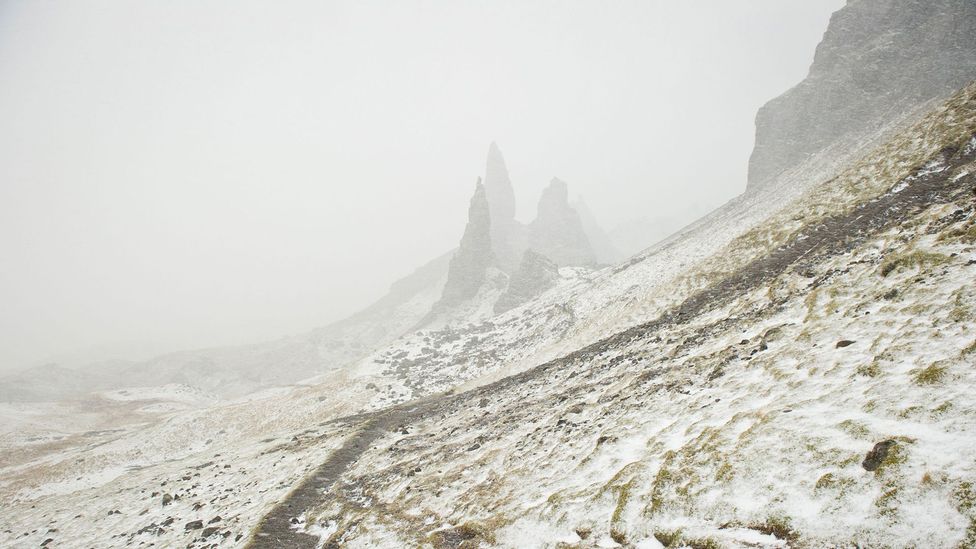 Scots has more than 400 words related to snow (Credit: Alamy)

New weather words are created at such a constant pace that it can be easy to forget what came before. ‘Mungy’, meaning muggy, first was recorded in England in the early 19th Century. In the 1980s, however, a reporter in California claimed he had invented it. ‘Haar’, for a cold fog in Scotland, may sound unusual for an English word. That’s because, linguist and translator Alexander Tulloch says, it’s “almost certainly Norse.”

Creativity when it comes to creating weather expressions is unlikely to stop any time soon. One example, from the last 20 or 30 years, is the term ‘lumps of rain’ to describe heavy, thick rainfall. So if centuries of linguistic history (or UK weather) have shown us anything, it’s that the future of British English will continue to include many words for ‘letty’, ‘stoating’ or ‘specking’ – that is, many words for rain.