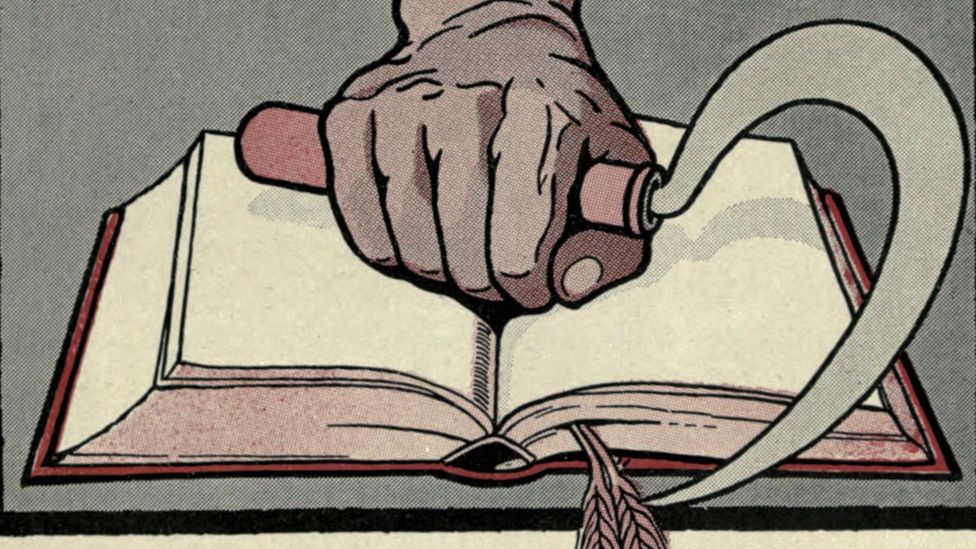 By Benjamin Ramm 24th July 2017
Underground publishers in the USSR broke rules in ingenious ways – such as hiding books in fake binding and making records on X-ray film, writes Benjamin Ramm.
I

In anticipation of the poet’s arrest, his creations were concealed by inventive means – sewn into the insides of cushions and shoes, or hidden in mattresses and saucepans. The police confiscated most of his papers, but others were smuggled out, or hidden surreptitiously in obscure locations. The most important poems were inscribed where even the wiliest investigator could not find them – in the memory of a devoted reader, who would pass them on.

In her memoir Hope Against Hope, Nadezhda Mandelstam, the wife of poet Osip Mandelstam, recounts the efforts she made to protect the work of her husband. The replication and dissemination of prohibited poetry became part of a culture of samizdat – an underground method of publishing that sought to evade strict censorship in the Soviet Union. We can read Mandelstam’s poetry today because individuals took great risks to reproduce and share his work, often using ingenious methods.

Gramophone records made of X-ray film were self-published

The term samizdat (‘self-published’) was coined in opposition to gosizdat (‘state-published’), a word stamped on every official publication. Samizdat encompassed a wide range of informally circulated material, and took various forms: political tracts, religious texts, novels, poetry, speeches and music. A related term is tamizdat (‘published over there’) – material smuggled into the USSR, such as ‘x-ray’ phonograph records of prohibited music, including rock’n’roll and compositions by banned émigrés. These soon appeared on the black market. 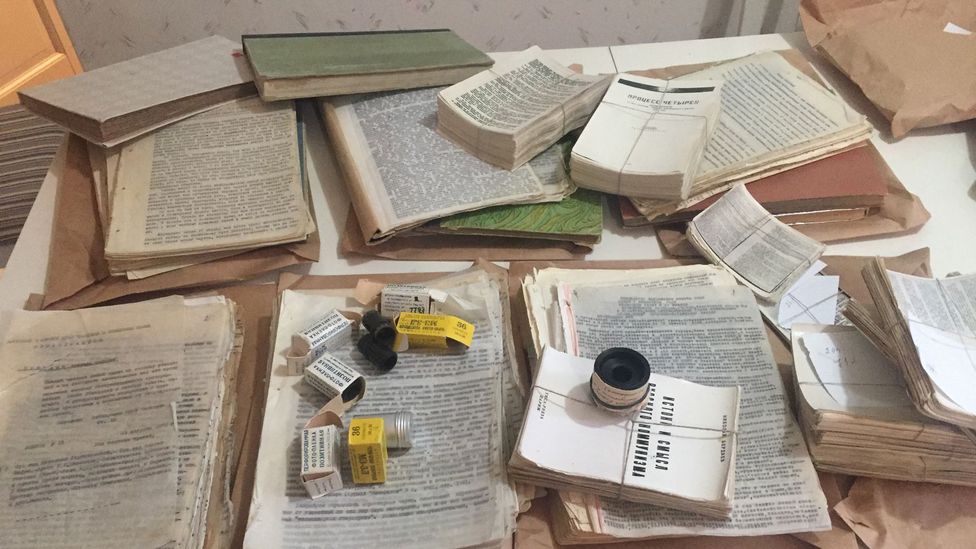 Samizdat was widely disseminated throughout the USSR, though authors made great effort to maintain their anonymity (Credit: Nkrita/Wikimedia Commons)

The practice of bootleg tape recording (magnitizdat) was less risky, as Soviet citizens were permitted to own a reel-to-reel recorder, and the majority of content was not overtly political, largely comprising of songs by solo Russian singers known as bards. Whereas the readership of written samizdat rarely exceeded the thousands, up to a million citizens listened to reel recordings. One of the most popular and subversive bards, Aleksandr Galich, used his songs to criticise “the fairy godmothers of censorship” and laud the role of underground media:

Untruth roams from field to field,

But that which is sung softly, booms,

Although the term samizdat refers specifically to the Soviet period, most notably after the death of Stalin in 1953, unauthorised publishing has a long tradition in Russia. In the late 19th Century, students circulated radical pamphlets denouncing the Tsar, and after the failed revolution of 1905 and the subsequent crackdown on civil liberties, texts deemed subversive were shared widely. From the time of World War One, interrupted in Russia by the revolution of 1917 and a civil war that ran until 1922, considerable restrictions were placed on printed material.

Samizdat reflected the changing political, cultural and geographical landscape of the Soviet state. Some of the material protested the suppression of Christian denominations (Orthodox, Catholic, Baptist) or made the case for ethnic groups seeking self-determination (Jews, Crimean Tartars, Volga Germans). Slavophile samizdat opposed the ethnic heterogeneity of the Soviet Union, in favour of autocratic Russian orthodoxy and Slavic supremacy – invariably tinged with racism and anti-Semitism – and against Western political concepts such as democracy and socialism.

Haphazard self-publishing techniques resulted in an inelegant look – but authenticity

The complete process was summarised pithily by dissident Vladimir Bukovsky: “Samizdat: I write it myself, edit it myself, censor it myself, publish it myself, distribute it myself, and spend jail time for it myself”. This popular definition makes samizdat sound like a solitary act, but the danger arose when each individual created a copy for others. If intercepted, these documents could often be traced by the authorities, as most personal typewriters had to be registered with the state. Back-up copies were occasionally made on microfilm, which was smuggled out for publication before being smuggled back in. 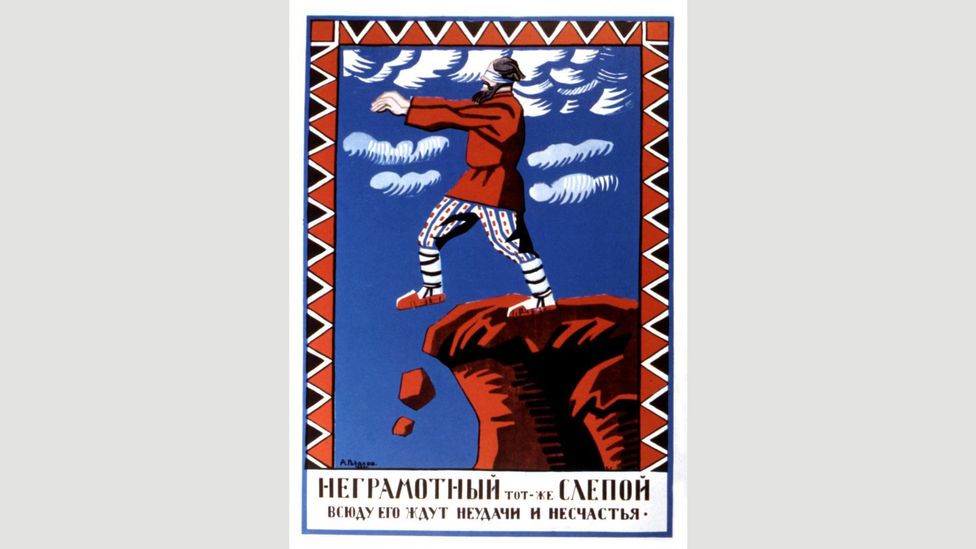 The Soviet government promoted the importance of literacy via posters like this one that suggested the inability to read is akin to a blind man walking off a cliff (Credit: Alamy)

Books and pamphlets were copied on carbon paper, with up to nine sheets interleaved with blank pages, making 10 in all – the legal maximum. To maximise space, the type was stretched to the margins in both width and length. Paper shortages were frequent and those who purchased more than modest quantities were liable to be reported. Each recipient in the chain was expected to make at least four copies, but was warned against trying to trace the author, lest they be taken for a police informer.

The haphazard and hurried technique made for an inelegant end product: blurry type, wrinkled pages and nondescript covers. Over time, this clandestine work of production attained a cultural cachet, as a work of verisimilitude against state-sanctioned publications, which were pristine but anodyne, and whose allure was limited by the censor’s stamp of approval.

The act of replication enabled copiers to immerse more deeply than during a casual perusal. Some even took it upon themselves to make alternations or omissions in the text. Such slippery authorship was reinforced by the fact that many writers, fearful for their safety, used pseudonyms and did not take credit for their work. This situation was exploited by the Communist Party itself, which argued that the lack of intellectual copyright made it unfair to disseminate the material. This imaginatively cynical tactic suggested that the state was protecting writers from exploitation – only a ‘bourgeois’ author could afford to give away their labour for free. 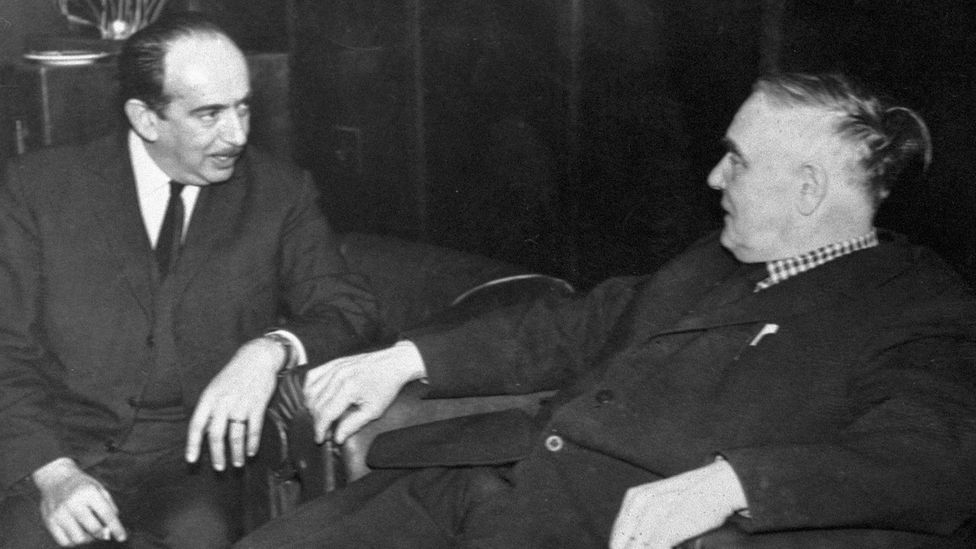 Aleksandr Galich was a poet, playwright and songwriter whose ‘bard songs’ criticised the USSR’s government – he had to leave the country in his later years (Credit: Alamy)

Perhaps the first major political document to appear in samizdat was Khruschev’s ‘secret speech’ of 1956 – a denunciation of Stalin that marked the beginning of a political and cultural thaw. This process took time but became evident in 1962 with the approved publication of Aleksandr Solzhenitsyn’s novel One Day in the Life of Ivan Denisovich (1962). Published in the literary journal Novy Mir (New World), the book offered a portrait of daily life in a prison camp (gulag) under Stalin – a subject previously beyond the bounds of public discussion.

The gulag system was largely dismantled by Khruschev, who weakened the secret police and initiated cross-border cultural exchanges. It was under Khrushchev’s rule that samizdat gained prominence in the Soviet Union, as the production of material not in accordance with official ideology no longer carried a death sentence.

But Khrushchev’s liberalising reforms met fierce resistance from hardliners, and in 1964 he was ousted by his former protégé Leonid Brezhnev. Almost immediately, under the direction of Yuri Andropov (head of the KGB, and Brezhnev’s eventual successor), censorship increased and dissidents were imprisoned or exiled. In 1965, two writers – Yuli Daniel and Andrei Sinyavsky – were arrested for tamizdat, publishing fiction abroad under a pseudonym. A transcript of the closed-door court proceedings was obtained by poets Alexander Ginzburg and Yuri Galanskov, who compiled a White Book documenting the trial. 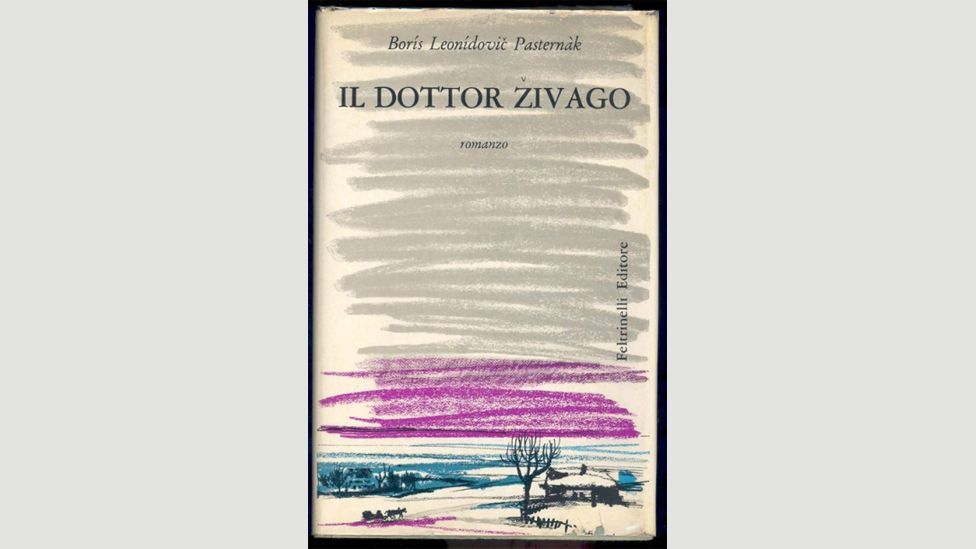 After it was rejected by the USSR, Boris Pasternak smuggled Doctor Zhivago to Italy where it was first published – the CIA helped it get printed elsewhere (Credit: Alamy)

The crackdown was met with protests – the first spontaneous political demonstration in 30 years, along with two open letters, circulated in samizdat form, one of which pleaded with Brezhnev to resist a return to Stalinism, signed by prominent figures such as composer Dmitri Shostakovich. It was only a matter of time before Ginzburg and Glanskov were themselves put on trial for the publication and distribution of samizdat material.

The return to stricter censorship gave impetus to samizdat, as works permitted under Khrushchev were forced back underground. In 1968, a group of intellectuals in Moscow started the longest-running and best-known samizdat periodical, the Chronicle of Current Events. In 65 issues over 15 years, the Chronicle meticulously detailed violations of civil rights and judicial procedure, including 424 trials, in which 753 people were convicted; not one of the accused was acquitted.

The Chronicle’s editors did not advocate the overthrow of the regime and maintained that under the 1936 Soviet Constitution, their publication was legal. The authorities did not agree: editors and contributors were sent to labour camps, psychiatric hospitals, or into exile. The Chronicle’s first editor, Natalya Gorbanevskaya, was arrested after taking part in the 1968 Red Square protest against the crushing of the Prague Spring. Gorbanevskaya became an international cause célèbre: US singer Joan Baez praised her during concerts.

The dry, concise style of the Chronicle intentionally contrasted with the denunciations of official state newspaper Pravda. Despite reporting harrowing testimonies, the Chronicle promised to make “every effort to achieve a calm, restrained tone” and a “strictly factual style” – as demonstrated by its legalistic headings (‘Arrests, Searches, Interrogations’, ‘In Prisons and Camps’) and its correction of even the smallest error. 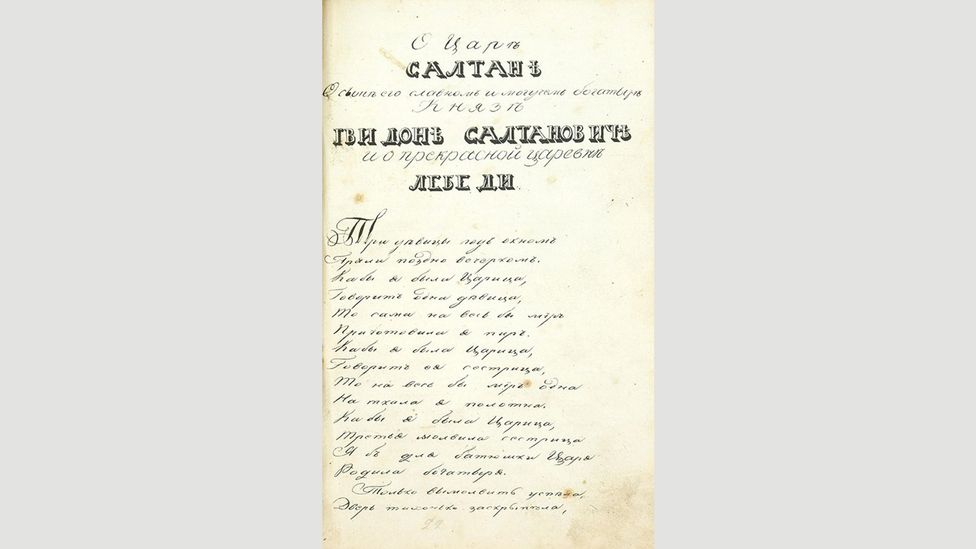 By 1985, there were more than one million items of prohibited material in the Lenin State Library – the largest spetskhran (restricted access collection). But the status quo could not last: the state bureaucracy was sclerotic, the economy was stagnating, and the old guard was dying – three leaders in quick succession. This led to the elevation of 54-year-old Mikhail Gorbachev, who acknowledged that the Communist Party could not sustain internal suppression. Gorbachev instituted the policies of perestroika (‘restructuring’) and glasnost (‘openness’) – the latter became the name of one of the most popular samizdat publications of the period.

It is very difficult to measure the impact of samizdat, although many believe it was a significant factor in undermining Soviet authority. For Ukrainian journalist Vitaly Korotich “The Soviet Union was destroyed by information – and this wave started from Solzhenitsyn’s One Day”. While the circulation of samizdat publications reached a relatively small audience, many of its readers were culturally influential. Some were powerful: indeed, government officials became regular readers, as they could only censor what they could understand. Samizdat informed their thinking – and their proscriptions helped dictate the boundaries of politically acceptable speech.

A century after the Russian Revolution, the democratising platform of the internet seems to have negated the need for underground media. But samizdat has received renewed attention since 2014, when in response to the Maiden protests in Ukraine, the Russian government stepped up its attempts to monitor web content. Sites that track state abuses are routinely blocked, and the emails and social media accounts of opposition leader Alexei Navalny have been hacked.

In 2015, an online New Chronicle of Current Events was launched, on the premise that citizens are misinformed by the manipulations of the mass media. The New Chronicle has published a list of 217 imprisoned dissidents in Russia, including opposition politicians and environmental activists.

Owners of websites critical of the Russian government are moving to foreign jurisdictions – but the challenge is not confined to a single nation. Popular blogger Anton Nosic sees a global parallel, arguing that “Wikileaks is a direct continuation of the samizdat tradition”. The US and British security services seek the “seizure of computer equipment, pressure on editors, demands not to publish certain materials… the mechanism and motivation are the same as 45 years ago”. Wherever the state seeks to silence dissent, the spirit of samizdat will thrive.