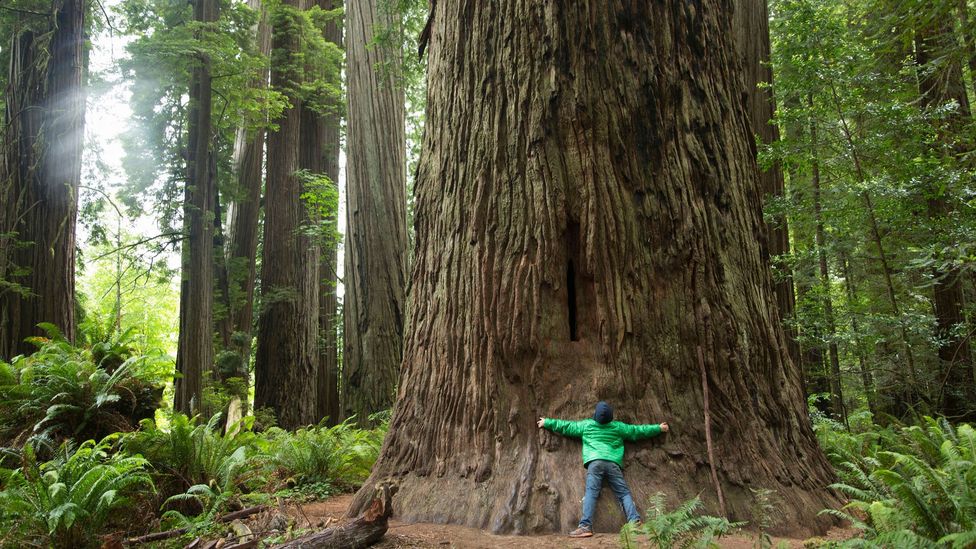 By Lindsay Baker 11th August 2017
Trees can save your life, and make you happy and mentally strong, according to a new wave of writers. Lindsay Baker explores the rise of the literary tree hugger.

“Trees are sanctuaries,” wrote the German poet and philosopher Herman Hesse.  “When we have learned to listen to trees… that is home. That is happiness.” In his book Trees: Reflections and Poems, Hesse makes the philosophical case for trees, and how they are the key to essential notions of truth, beauty, home, belonging and happiness. The phrase ‘tree hugger’ may have long been used as a term of ridicule, but it seems Hesse might have been onto something. 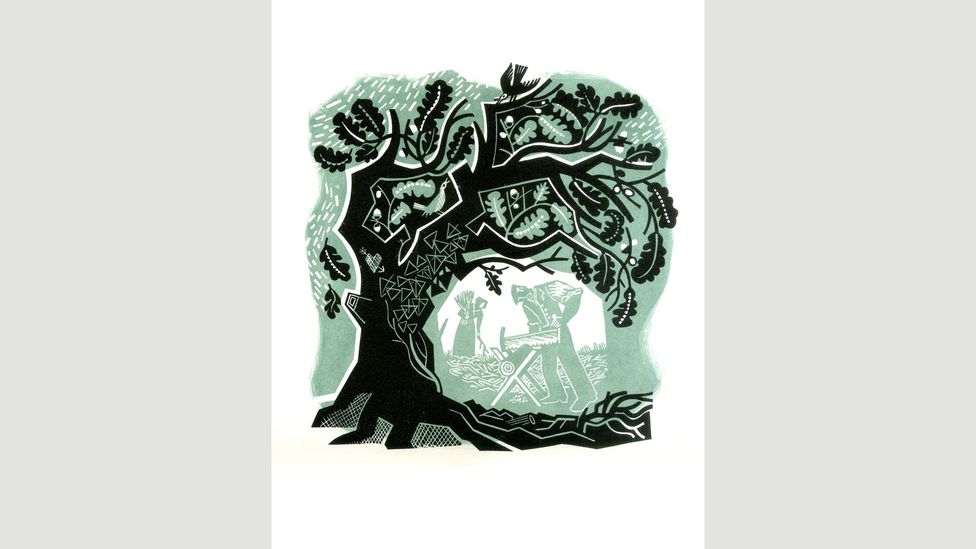 Suffolk-based print-maker and illustrator Clare Curtis is among the contemporary artists inspired by trees and woodland (Credit: Clare Curtis)

Now ‘tree time’ is enjoying a resurgence in popularity – on social media the tree hashtags #treesofinstagram and #lovetrees are rapidly proliferating. And the practice of Shinrin-yoku, the Japanese term for ‘taking in the forest atmosphere’ or ‘forest bathing’, is currently back in fashion as a popular type of preventative health care and healing in Japanese medicine. In recent years, there has been a sharp rise too in tree literature, with new books on the subject appearing regularly – among them The Hidden Life of Trees by Peter Wohlleben, Strange Labyrinth by Will Ashon, The Long, Long Life of Trees by Fiona Stafford and the allegorical tale The Man Who Planted Trees by Jean Giono, to name just a few. So why the recent tree obsession? Why are writers and artists so drawn to trees as a subject? What can trees teach us? Can trees actually make us happy and more tranquil?

- A beautiful animation of Philip Larkin’s The Trees

Not that trees are a new subject in literature, of course. Hesse is just one of many authors, poets, artists and philosophers who, over the centuries, have been inspired by trees and woodland. Other examples include 19th-Century English poet John Clare who wrote in rural dialect and whose poem The Fallen Elm explores the freedoms both lost and gained with industrialisation, when swathes of ancient woodland were felled. William Wordsworth’s poem It Was an April Morning, meanwhile, captures the beauty and promise of a tree in Spring. 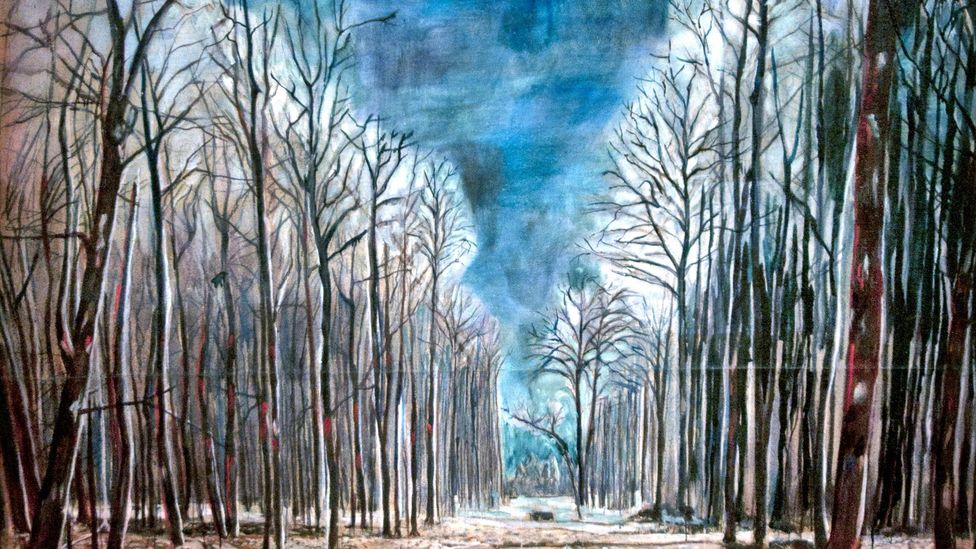 German artist Anselm Kiefer frequently depicted forbidding forests and woods in his paintings, such as in this detail from Resurrexit 1973 (Credit: Peter Horee/Alamy)

Among the tree-themed books to emerge recently is an anthology, Arboreal: A Collection of New Woodland Writing, which explores the literature, history, mythology and folk culture of trees and woodland. It features essays by architects, artists and academics as well as by authors who have an association with or affinity to trees and forests. Contributors include poet Zaffar Kunnial, authors Tobias Jones, Helen Dunmore, Ali Smith, Germaine Greer, Richard Mabey and more.

Forest for the trees

Arboreal contributor Fiona Stafford, also the author of The Long, Long Life of Trees , points out that the current tree obsession in literature is part of the burgeoning trend for new nature writing, which is at least partly related to awakening concern about the environment. “But new writing about trees is also part of very old literary traditions,” she tells BBC Culture. “The paradox of pastoral is that it always seems to be harking back to a lost rural world, but at the same time, it’s always springing up again in new forms with urgent contemporary relevance.” 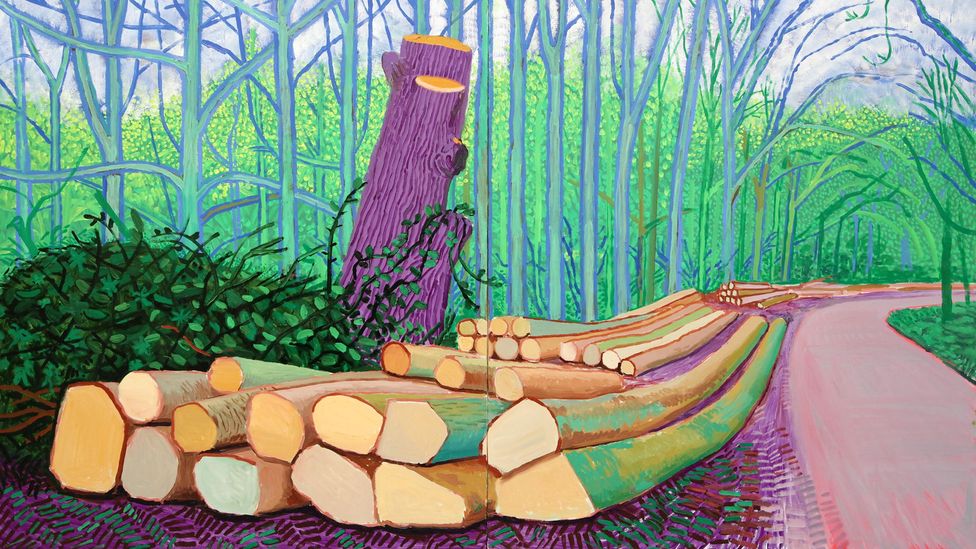 Since childhood, Stafford has had a love of trees. “Trees seem to create a different world within themselves, not just in terms of the wildlife but as imaginative spheres where things seem possible that might not be in the everyday working world.” She finds something “very soothing”, she says, about “a huge familiar object that is so full of life and just quietly nurtures all the things that live within its canopy.” Stafford points to classic children’s literature from Robin Hood to The Wind in the Willows. “And Frances Hardinge’s recent award-winning book The Lie Tree may well be a classic of the future.”

Stafford is also interested in how visual artists are inspired by and interpret the subject. Her favourite? “David Hockney,” she says. “Who paints trees and woodland with such passion and intensity that what might have seemed a fairly unremarkable scene is utterly transformed. He manages to discern the character of individual trees and make quite common trees seethe with energy and brilliant, unexpected colour.”

The work of John Crome and Gustave Courbet have explored the subject of the oak tree, which has mythical status as an emblem of strength and dignity. 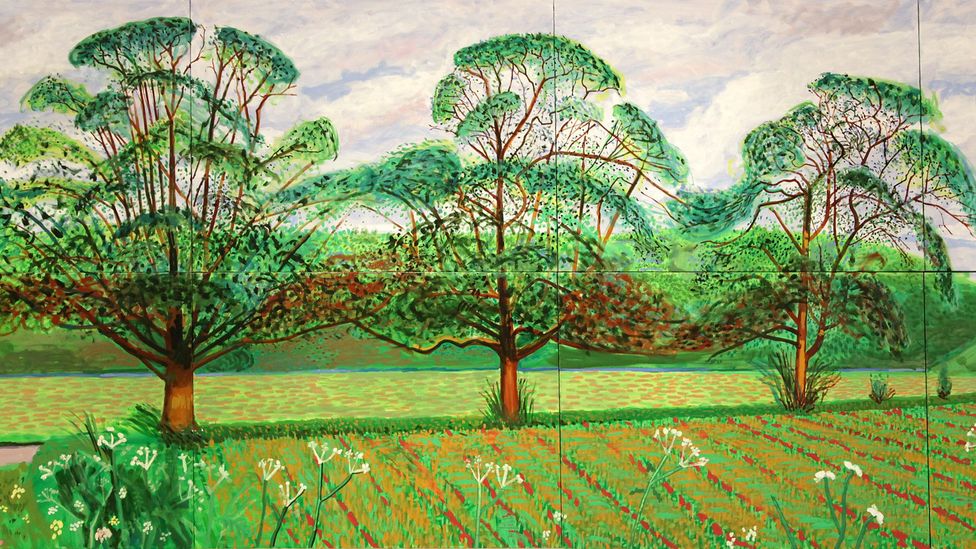 The woodland of David Hockney’s native Yorkshire inspired his series of iPad drawings and paintings, including Three Trees near Thixendale from 2008 (Credit: Alamy)

Stafford also explores the darker side of woodland, which is, she says, “engrained in European folktales”. From the Grimm Brothers to the Russian tales of Baba Yaga. “Fear of what danger might lurk in thick forests is imbibed through stories like Little Red Riding Hood or Babes in the Wood. But there are also sophisticated adult versions of dark trees, which Dante understood in The Dark Wood. Sylvia Plath and Robert Graves have also drawn on dark forest imagery.” And of course many visual artists – among them Anselm Kiefer – are drawn to the intense, dark side of trees and forests as a subject.

Tree hugging is derived from an incident near Jodhpur in the 1730s, when a group of women staged a protest to save their woodland, and lost their lives (Credit: Cultura RM/Alamy)

Despite these references though, in the end, trees emerge as a force for good in most of the recent writing on the subject. Does Stafford think trees can make us happier? “Trees appeal to all the senses,” she points out.  “Fresh smells, the sound of moving leaves and birdsong, the texture of the bark – all of these are appealing, especially in modern cities... They connect us to others, whether contemporaries or those in the past or future. If you plant a sapling that may take 200 years to reach its full stature, you are pledging faith in the future and offering a gift to the generations yet to be born. That’s a pretty good feeling.” 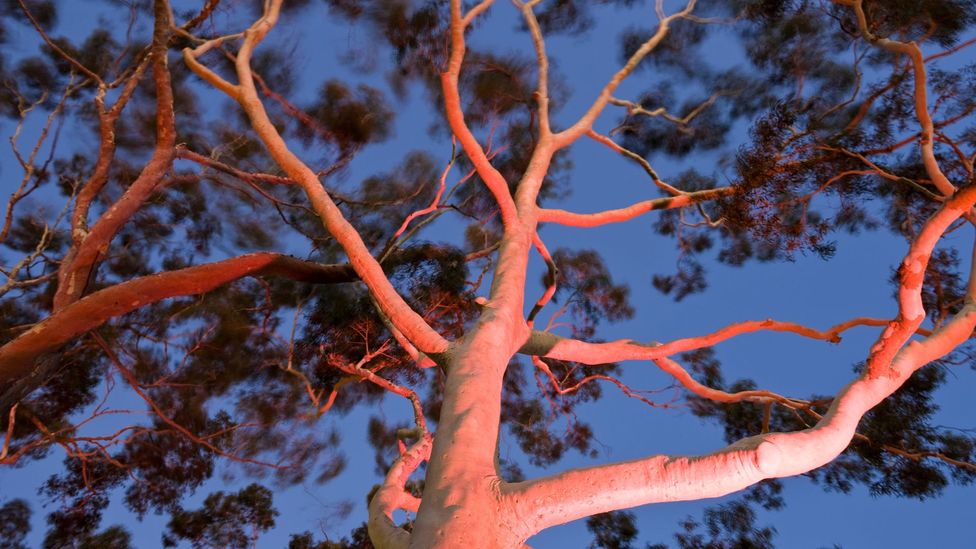 The Woodland Trust in the UK is a strong promoter of ‘tree time’ as a way to make us feel better in body, mind and spirit, and claims that our immersion in nature calms our spirit and helps us cope with stress. The Trust collaborates with Common Ground on a seasonal periodical Leaf! that shares art, poetry and stories about trees. It is also working on a modern version of The Charter of the Forest, which was originally drawn up in England in 1217, hot on the heels of the Magna Carter, and looked at our rights and responsibilities in relation to the nation’s forests, including issues such as grazing of pigs and the lighting of fires. The Charter for Trees, Woods and People is the 21st Century equivalent, and is to be published in November this year.

“‘Tree time’ can be grounding for those undergoing stress,” agrees Tobias Jones, an author who is among the contributors to Arboreal and who spoke on a panel at the Hay Festival to discuss the subject. “Nature deficit syndrome is real, and I’m convinced that the woodland setting is the most healing environment there is,” he says. Jones has established a community in the UK, the Windsor Hill Wood, “a refuge for people in crisis”. It is also the subject of his most recent book A Place of Refuge.

In the woodland you are facing your fears – Tobias Jones

When Jones was researching an earlier book Utopian Dreams, he saw how mental health was improved by living in woodland. According to the author, trees are a panacea for anguish and anxiety. This is partly due to the ‘forest bathing’ notion, but also because “Woods can be frightening, eerie, spooky places, and in the woodland you are facing your fears.”  And also, he says, the arduous and time-consuming work involved in being self-sufficient in a woodland – cutting wood to heat accommodation, making furniture and other essentials out of the wood from the forest, is therapeutic and peaceful. He points to ‘coppicing’, the practice of chopping trees down at ankle length in order to re-grow, as analogous. “There’s something about trees being laid low and cut off in order to regenerate that is good for people’s mental health and sense of continuity and rebuilding their lives.” 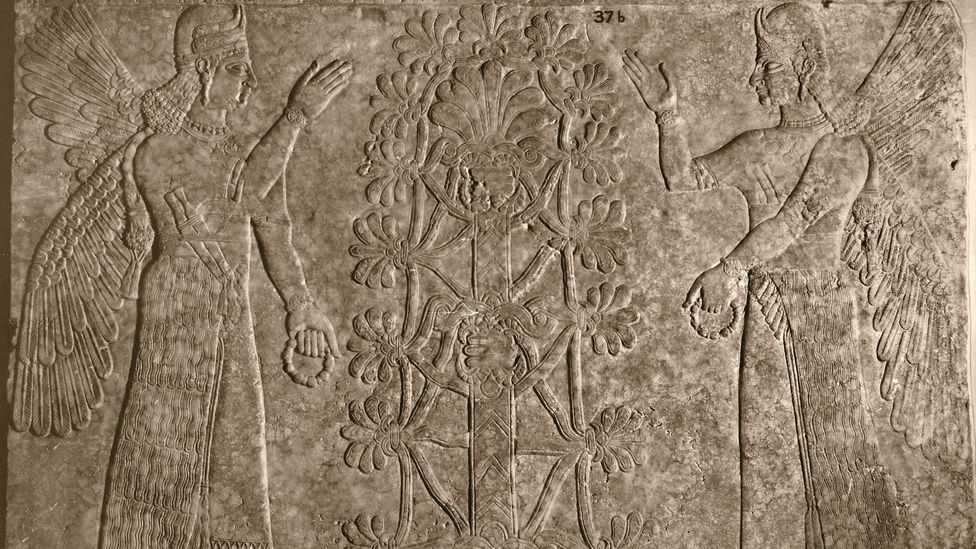 Trees have always been emblematic, as seen in this ancient engraving of winged protective spirits and the sacred tree of life. (Credit: Heritage Image Partnership Ltd/Alamy)

In Arboreal, the poet Zaffar Kunial describes how a laburnum tree in the back garden of his childhood home in Birmingham became meaningful to him, giving him a sense of rootedness. “It became known in the family as ‘my tree’,” he says. “And it came to represent time and continuity and being rooted, particularly as I had parents from two different continents.” Kunial’s poem Fielder describes how, while looking for a lost cricket ball, he finds himself unexpectedly in the undergrowth of woodland, “a shady fingernail of forest”, and has a moment of clarity, like “a stopped clock”. He is, he says, interested in “the prismatic quality of light in woodland, and how the light seems to be in blades, with the trees seeming to chop up the light. When you see bluebells in a woodland they look hazy, almost like a reflection of the sky. It throws me out of balance, throws my sense of time.” Lebanese-American poet Kahlil Gibran was equally inspired by the subject: “Trees are poems the earth writes upon the sky,” he wrote.

The phrase ‘tree hugger’ is considered by some to be an insult, suggesting a hippy-dippy dreamer, out of touch with real life. In fact, the derivation of the much-maligned tree hugger comes from a scenario that was all too real. The idea of tree hugging began in India in the 1730s, when the maharajah wished to build a new palace in a village outside Jodhpur that was also the home of the Bishnoi people, a sect of nature worshippers. The maharajah ordered the destruction of some ancient trees in the village to make way for the new palace, and Amita Devri and other female members of the Bishnoi bravely protested by surrounding the trees and wrapping their legs and arms around the trunks to protect them in a peaceful protest. Tragically, they made the ultimate sacrifice. They were beaten back by the tree fellers, and it is said that 353 protesters were axed to death before the maharajah finally intervened.

There is more to the term tree hugger than meets the eye, and the same could be said of trees themselves. Or as metaphorical tree hugger Herman Hesse wrote: “In their highest boughs the world rustles, their roots rest in infinity; but they do not lose themselves there, they struggle with all the force of their lives for one thing only: to fulfill themselves according to their own laws, to build up their own form, to represent themselves… Nothing is more exemplary than a beautiful, strong tree.”