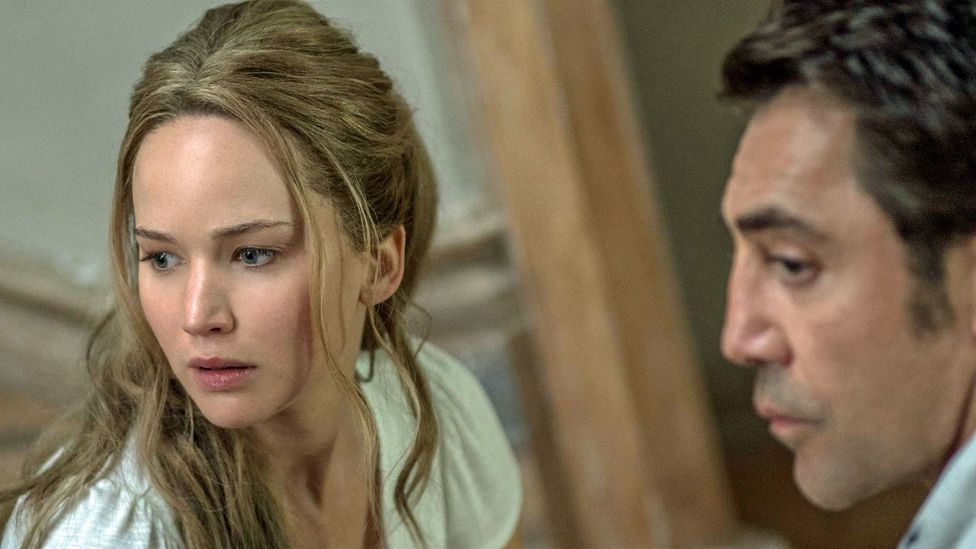 Darren Aronofsky has had a lot to say about his psychological horror film Mother! and how the state of today’s world inspired him to write it. “From this primordial soup of angst and helplessness,” he has said, referring to a list of problems from the environment to the refugee crisis, “I woke up one morning and this movie poured out of me.”

It is full of vapid characters and overwrought imagery

Unfortunately, soup is also the perfect word to describe this pretentious mess of a film. It is full of vapid characters and overwrought imagery, which Aronofsky seems to think add up to allegory.

Jennifer Lawrence plays a young wife and Javier Bardem her husband, a famous poet suffering from writers’ block. The first bad sign is that none of the film’s characters have names, as if that will make them universal.

- The Death of Stalin is absurdly funny

- Has Hollywood let Idris Elba down

The couple lives in a large isolated house, the kind that usually just exist in horror movies, and at the start Aronofsky expertly sets up how Mother! will play into genre conventions. Ed Harris arrives at the door, a typical mysterious stranger whom Lawrence, and the audience, distrusts. Why does her husband invite him to stay?

Soon Harris’ wife joins them. Michelle Pfeiffer briefly adds a jolt of humour, asking Lawrence intimate questions, creating chaos in the kitchen when she prepares spiked lemonade, having sex with Harris with the bedroom door open.

For a time Aronofsky skillfully unravels a narrative thread, creating suspense. The camera creeps around the house following Lawrence, sharing her confused perspective, as it does throughout the film.

But before long he starts loading on heavy-handed symbols and biblical allusions, and so many references to Rosemary’s Baby that Mother! begins to feel like a remake.

The house had once burned to the ground, and Bardem salvaged from the ashes a crystalline stone that is some kind of artistic talisman. The home invasion plot ramps up, and among the unnamed new guests are two brothers. Think of them as Cain and Abel. Lawrence gets pregnant and stops swallowing whatever medicine she has been taking, something mysterious in an old-fashioned vial. And her husband, even more than the John Cassavetes character in Rosemary’s Baby, will sacrifice anything for his art. Even her.

It’s easy enough to start following Mother! on this crazed journey. But eventually the path has to lead somewhere. It doesn’t have to go anywhere believable or deliver standard horror or take viewers where they expect. It just has to go somewhere, anywhere.

Instead, as it becomes more over-the-top, the film also becomes more pompous. The horror and religious references are handled without a hint of irony. Aronofsky loads on themes. The film is about fame and art. Gender issues emerge in the way Lawrence is willing to sacrifice everything to be Bardem’s muse and in the way he is willing to exploit her. A religious cult develops around Bardem the poet.

The ending evokes Hieronymus Bosch, is full of action and is essentially meaningless

The film’s extended, climactic scene is meant to be a surprise. It’s enough to say that the episode evokes Hieronymus Bosch, is full of action and is essentially meaningless. It turns out the house is the Earth; we get it. The house is probably a mess of other things too. Aronofsky simplistically piles on allegorical possibilities, but none of them register enough to carry any weight.

Aronofsky, who has made films as hallucinatory as Black Swan and as realistically gritty as The Wrestler, is an expert film-maker. The visual style of Mother! displays his expertise. The house had once burned to the ground, and a time-lapse sequence at the start shows it slowly regenerating, as if it were some organic creature.

His reliance on Lawrence’s perspective keeps viewers’ sympathy, even as the film walks a line between the dreamlike and the real. At times she puts her hand against a wall and what seems to be some kind of throbbing membrane appears. Blood seeps through the floorboards of the house. Is she delusional? Is she even real?

But in the end, while Lawrence delivers as sincere a performance as anyone could, her character is the film’s biggest problem. Black Swan mined psychological horror with an intensity and focus that earned its scenes of either magical realism or delusion.  In Mother! there is no sense that Lawrence’s character ever read a poem, much less a poem of her husband’s. The character is flat, which is not the same as universal or symbolic. She seems to represent pure self-sacrifice, but why? The only evidence on screen suggests it’s because Aronofsky declared her to be. Maybe there’s an allegory there in which the writer-director is God, but that would be another conversation entirely.