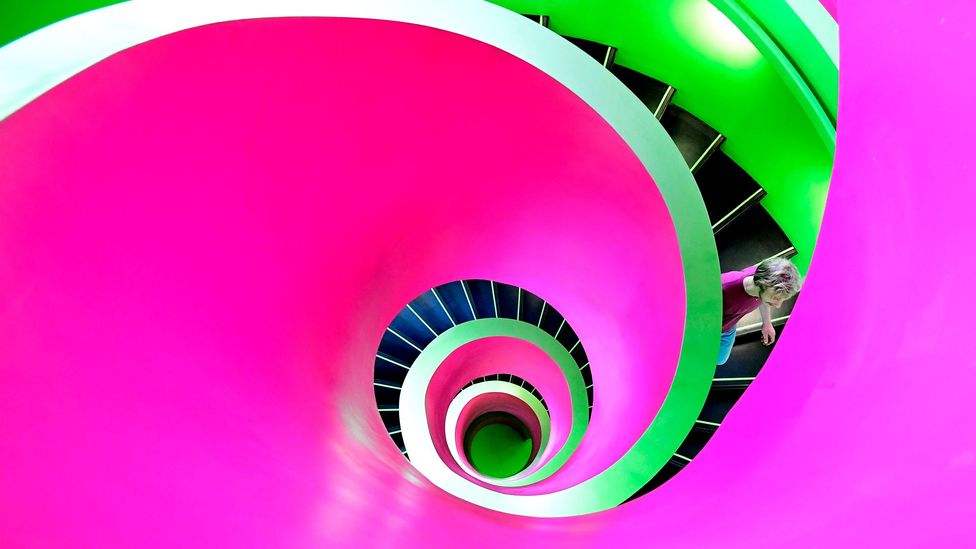 By William Cook 13th October 2017
With the rise of smartphones and Wikipedia, concerns have grown that buildings full of books will become obsolete. But many of the best and biggest libraries have been built since the millennium. 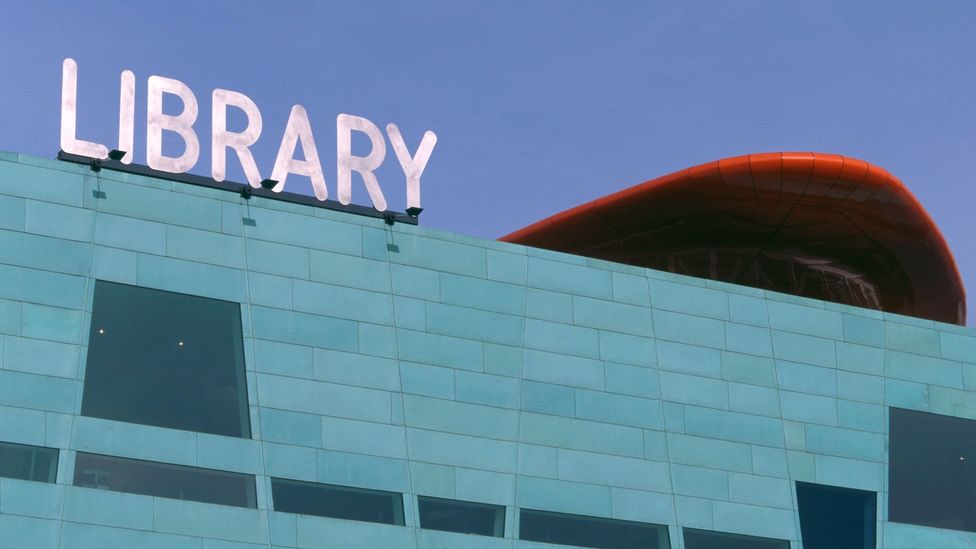 Opened in 2000, this is where Britain’s library revival began. In a deprived inner-city enclave, with all the usual social problems, a new library hardly seemed like a top priority, but Will Alsop’s dynamic building put Peckham back on the map. In its first year, half a million people came through this library’s doors, and it won the coveted Stirling Prize for Architecture. A huge inverted L, it quickly became a local landmark, but it was the interior that was really radical. It felt like the chillout zone in a hip nightclub, and it changed our idea of what a library ought to be. (Credit: Alamy) 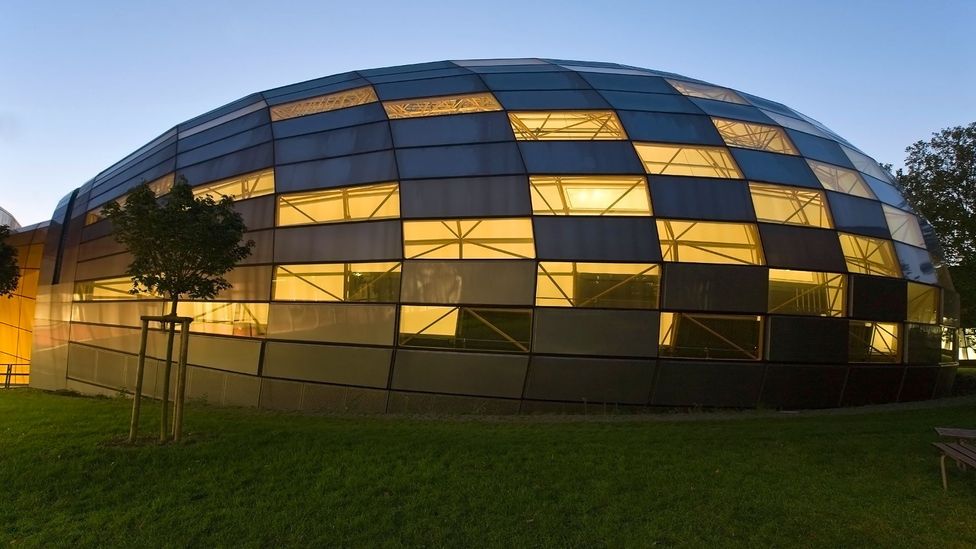 When Norman Foster was hired to build a new library for the Free University of Berlin, he began by thinking where people most like to read. The image he came up with was all about calm and quiet. It was also about natural light. He pictured someone sitting beneath a tree, reading a book in dappled sunlight, and that’s the ambience he aimed for here. Built in 2005, its smooth and rounded structure mimics the contours of a human skull – it’s become known as The Berlin Brain. Energy saving is an important part of Foster’s concept. In his own words: "this building is working with the world outside". (Credit: Alamy) 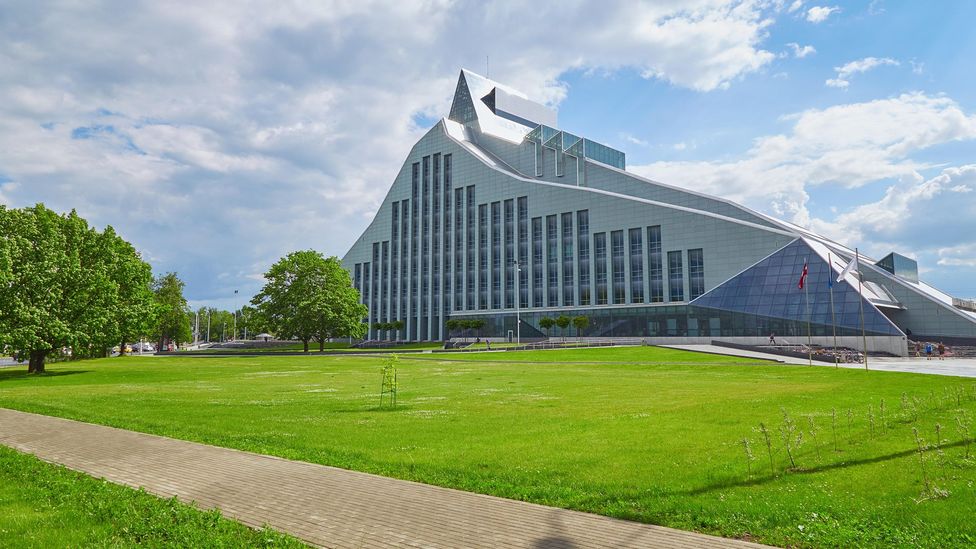 Latvia’s National Library has mirrored the ups and downs of this Baltic State. It was founded in 1919, a year after Latvia won its independence, but it lost its national status in 1940 when Latvia was swallowed up by the USSR. In 1990, Latvia regained its independence, and work began on a new library in Riga, designed by Latvian-born architect Gunnar Birkerts. The new building was completed in 2014, the year Riga became European Capital of Culture. In a powerful symbol of renewal, Latvians carried books across the city, from the old building to the new one. Birkerts’s life story also mirrors the history of his homeland. Born in 1925 in Riga, he fled when the Russians invaded and emigrated to America. There, he became an eminent architect, returning home after independence to construct several key buildings in Latvia’s reconstituted capital. He died in August this year. (Credit: Alamy) 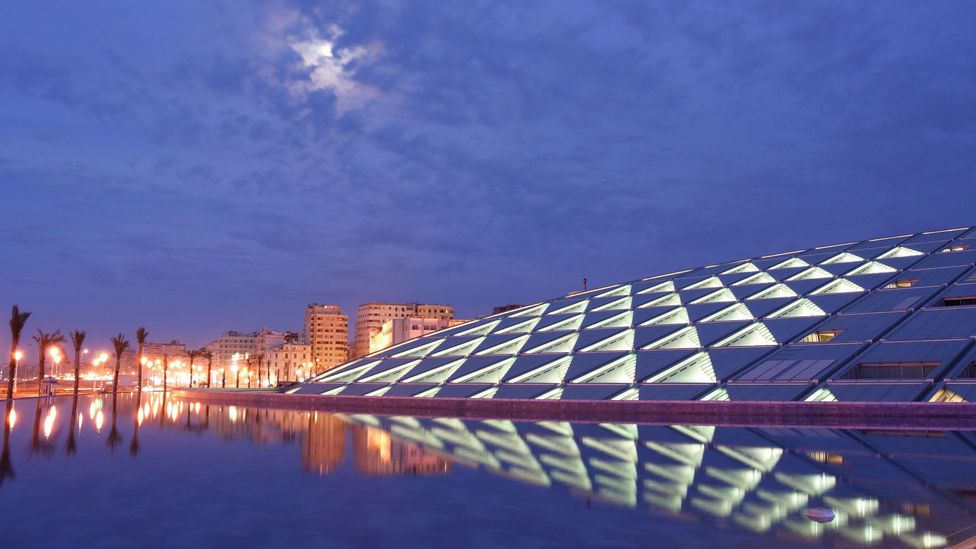 Julius Caesar never meant to burn down the ancient library of Alexandria (he only meant to burn the ships in the adjacent harbour) but his act of arson started one of the most ruinous bonfires the world has ever seen. Half a million manuscripts went up in smoke, half a million masterpieces lost forever. Nothing can bring back those lost books, but Alexandria now has a new library, one of the finest in the world. Built in 2002 by Norwegian architects Snøhetta, it's a striking modern building. But the best thing about it is what's inside. As well as extensive Arabic and French libraries there are 13 academic research centres (including a centre for Islamic Studies) and 15 permanent exhibitions (including a display of medieval Muslim astronomy). An interactive 'culturama' guides you through five millennia of Egyptian history. There's even a planetarium. Alexandria's new library now attracts 1.5 million visitors a year. (Credit: Alamy) 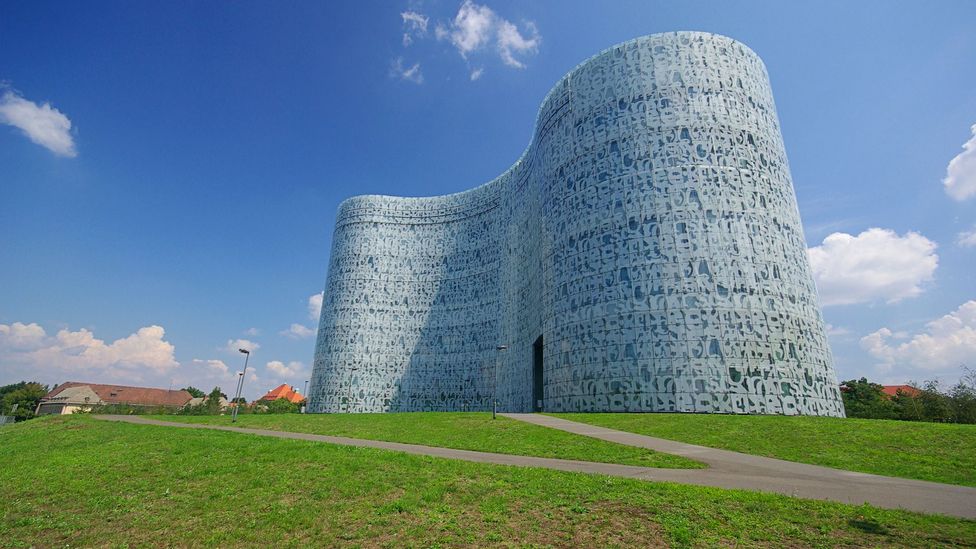 Founded in 1991, a year after German Reunification, Brandenburg University of Technology has revitalised the East German city of Cottbus, and its new library is its centrepiece. Built in 2004 by Swiss ‘starchitects’ Herzog & De Meuron, it’s a modern-day Tower of Babel, adorned with letters from a range of languages. Although the exterior feels elemental, the interior is bold and modern, with a pink-and-lime green colour scheme. “If you want to know about the success of a building, ultimately the question is: how does it work?” Jacques Herzog once observed. “How do people deal with it? Does it make their lives more interesting, more attractive, more inspiring?” This library passes that test. (Credit: Alamy) 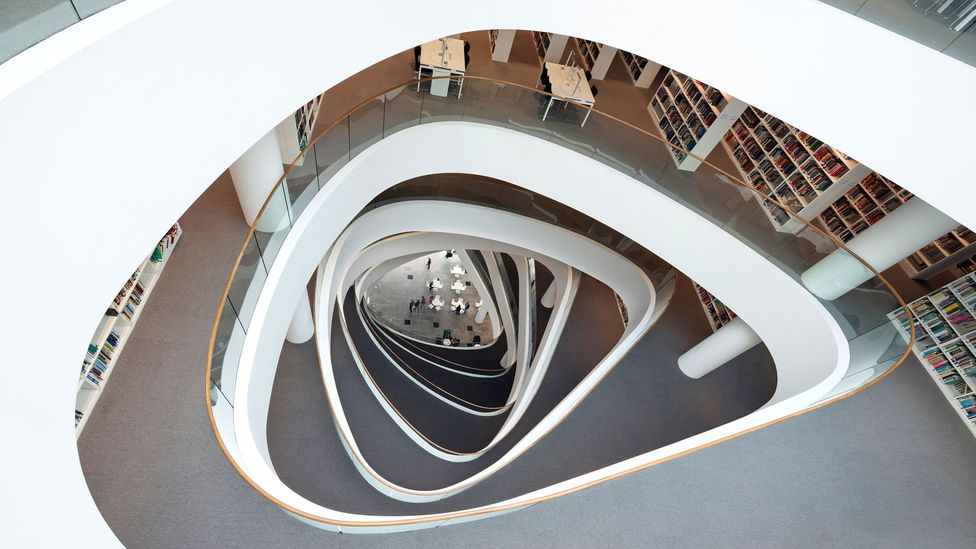 Like a lot of Scottish cities, Aberdeen has been blighted by ugly tower blocks. But, opened by Queen Elizabeth II in 2012, this seven-storey monolith shows that high-rise can be beautiful. It’s been likened to a lighthouse, linking the city to the sea. Danish architects Schmidt Hammer Lassen previously made a big splash with The Black Diamond, their bold extension to the Royal Library in Copenhagen. With its striking shell of whitened glass, this sleek building is its translucent twin. The zigzag façade also acts as a climate buffer, adapting to changing light and temperature. No wonder it won a RIBA (Royal Institute of British Architects) National Award in 2013. (Credit: Alamy) 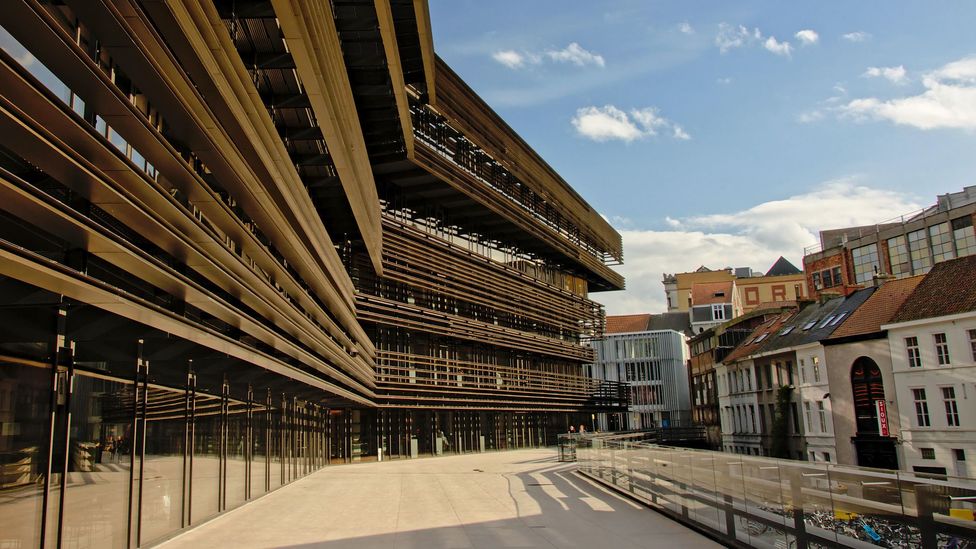 A medieval metropolis with a big student population, Ghent is just as pretty as Bruges, and lately its historic centre has been wonderfully restored. A contrast to its ancient monuments, De Krook, which links the historic centre of the city to the art quarter, is a stark metallic structure, in a neglected corner of the waterfront. Promoted as an ‘open house for knowledge and innovation,’ this collective of institutions including the city library is a cultural catalyst, reviving what used to be a no-go zone. There are talks and exhibitions – you can even try your hand at 3D Printing. Ralf Coussee, of local architects Coussee & Goris, calls it "a balcony on the city". (Credit: Alamy) 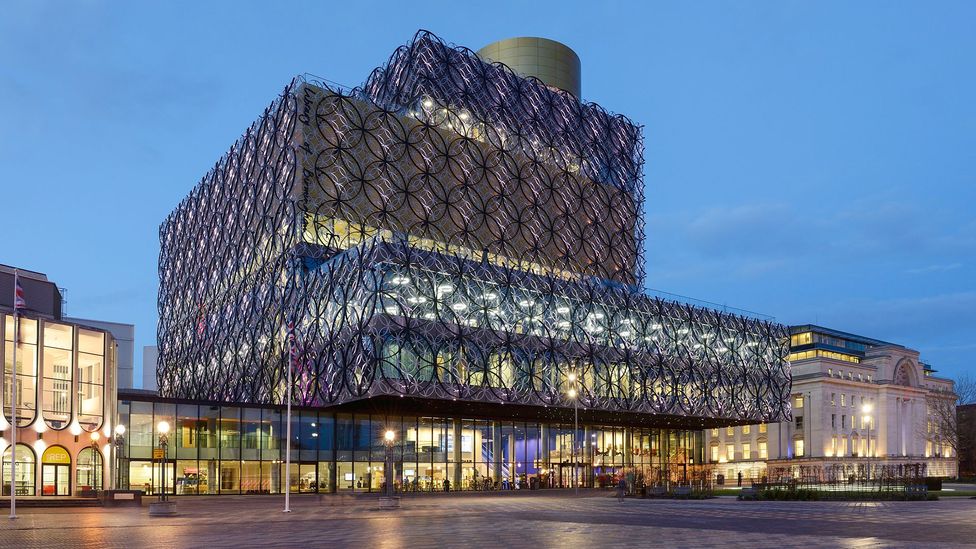 When Birmingham’s city council decided to build a brand-new library, a lot of armchair critics thought they must be mad. Britain’s second city already had a massive library, with more than a million annual visitors. Yet that brutalist building had become largely seen as an eyesore, so in 2013 it was torn down to make way for this ornate 10-storey structure built by Dutch architects Mecanoo, Taxpayers shuddered at the £189 million price tag, but it’s rapidly become a popular rendezvous spot, with amazing views across the city. And it’s even up there with some of the UK’s most popular attractions, with more than two million visitors every year. (Credit: Alamy) 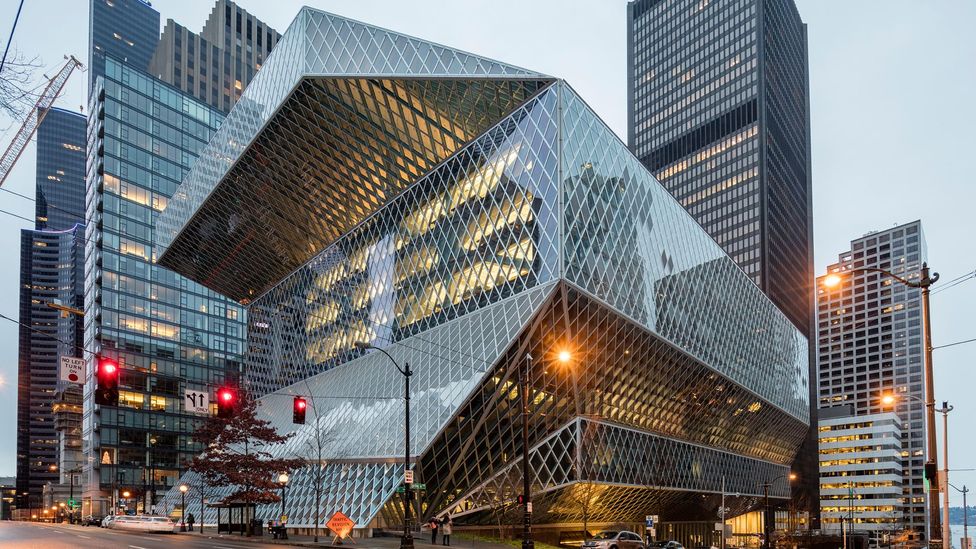 In 1997, Seattle embarked on a $200-million programme to revive its 27 public libraries. More than half the budget was spent on its Central Library, which opened in 2004. Built by a Dutch firm, Office for Metropolitan Architecture (OMA), with Seattle architects LMN, its glass façade opened the building up to the city, and created a light and airy space within. “Seattle is a city of readers but our library buildings were getting tired,” said Seattle City Librarian Deborah Jacobs. With 1.5 million books, and more than two million visitors per annum (double the footfall of its predecessor), this building was a wake-up call. (Credit: Alamy) 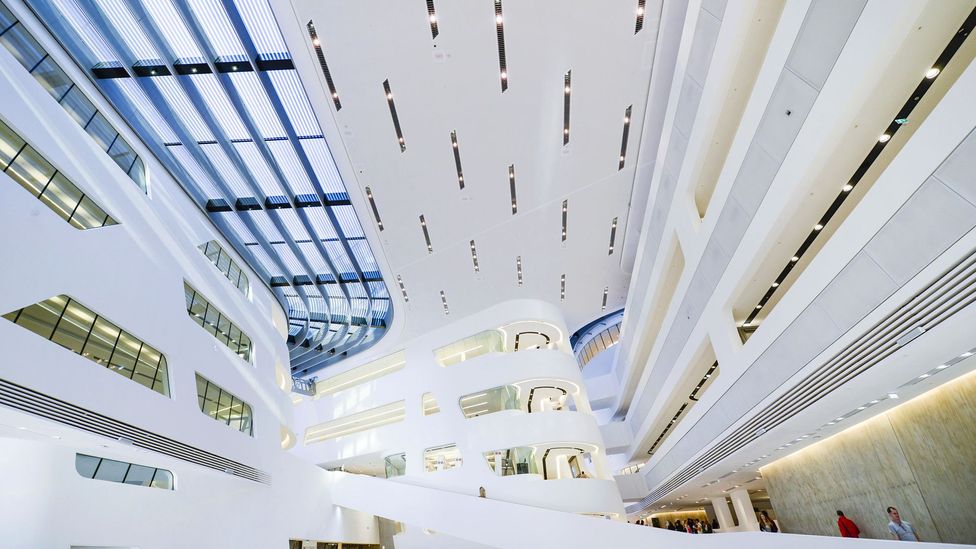 When Zaha Hadid died last year aged 65, the world lost one of its most dramatic and provocative architects. The Guardian called her ‘The Queen of the Curve,’ and this futuristic library, at the heart of Vienna’s new economics campus, sums up her sweeping, sculptural style. Its cantilever roof, which juts out precariously over the piazza below, makes it an icon of modern Vienna. But this building is even more arresting inside. Born in Baghdad but based in Britain, Hadid created work that fused Western and Eastern influences, from the geometric buildings of Mies van der Rohe to the shifting sand dunes of the desert. (Credit: Alamy)