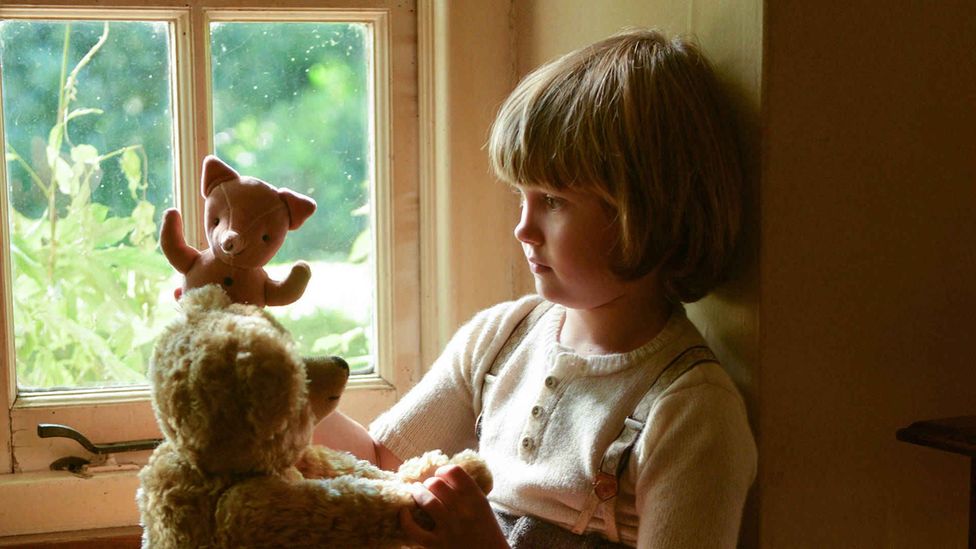 Goodbye Christopher Robin is a strange proposition. It’s a film that won’t attract many viewers who aren’t already fans of AA Milne’s classic Winnie-the-Pooh books, and yet its explicit purpose is to ensure that anyone who sees it will never enjoy those books in the same way again. Remember Saving Mr Banks? Remember how it suggested that PL Travers wrote Mary Poppins because she had an alcoholic father and a suicidal mother? Compared to Goodbye Christopher Robin, that was a feel-good treat for all the family.

In the unlikely event that you aren’t familiar with Winnie-the-Pooh, the stories and poems are all about a boy named Christopher Robin who imagines that his cuddly toys – Pooh Bear, Tigger, Piglet, Eeyore, and the rest – live in the woods near his home. One of the unique attributes of the books is that the toys and their owner weren’t quite fictional. Pooh Bear and his pals are now on display in the New York Public Library, and Christopher Robin was Milne’s own son. As well as being delightfully funny and quirky, then, the books are a chronicle of Christopher’s bucolic childhood and a testament to his father’s profound love. Or so you might assume. But this sour behind-the-pages drama insists that Christopher and his dad barely spoke except during one brief period when they were playing Winnie-the-Pooh games together – and then Milne spoilt everything by exploiting those games for literary fame and fortune. It’s a film which might come in useful as a how-to guide for raising unhappy children.

- All the king’s men can’t save Kingsman

- Mother! is a pretentious mess

- The Death of Stalin is absurdly funny

At least Alan Alexander Milne has some excuse for being a remote, joyless father. Played a little too stiffly by Domhnall Gleeson, he returns from The Great War suffering from post-traumatic stress disorder, and while he revels in the acclaim that comes from being a Punch magazine humorist and a West End playwright, every pop of a champagne cork sends his mind tumbling back into the trenches. Still, Milne is Parent of the Year compared to his glamorous wife Daphne (Margot Robbie), a spiteful socialite who believes that her maternal duties towards her dimple-cheeked son (Will Tilston) ended when the midwife cut the umbilical cord. Apart from making Christopher wear dresses because she wanted to have a daughter, and nicknaming him Billy Moon, her sole contribution to his upbringing is to hire a kindly Scottish nanny (Kelly Macdonald) to do it all for her. And then she treats the nanny as viciously as she treats everyone else.

The film gets gloomier than Eeyore on a no-thistles diet

Essentially a pantomime villain, Daphne grows even more combative and selfish when the family moves to a farmhouse in the quiet Sussex countryside in 1925. But things look up when Milne and Billy go out to play in the woods. Not only do they bond at last, but Milne begins to recover from his shellshock, and he gets an idea for a series of bestsellers while he’s at it. The film might have been quite heartening if it had ended there. Alas, when Winnie-the-Pooh becomes a publishing sensation, Goodbye Christopher Robin gets gloomier than Eeyore on a no-thistles diet. Billy is whisked from book signings to photograph sessions at a relentless pace, thus obliterating his anonymity at the same time as stoking his father’s resentment. “Surely he must be the happiest boy on Earth,” smarms an American reporter. Apparently not.

The film’s director, Simon Curtis, and its screenwriters, Frank Cottrell Boyce and Simon Vaughan, have made a timely and bravely unsparing cautionary tale about the poisonous effects of sudden and unwanted stardom. They compromise with a sentimental reconciliation scene at the end, but otherwise there is an admirable toughness to their contention that showing off one’s offspring to the world can be as cruel as locking them away from it. Anyone who sees the film will think before twice before posting photos of their own children on Instagram.

But if the plot of Goodbye Christopher Robin breaks away from the stuffy traditions of the polite, middlebrow British biopic, other elements of it don’t. On the contrary, much of the film makes the Winnie-the-Pooh books seem like models of grimy realism. It is set in a sun-drenched olde England where everyone wears perfectly tailored clothes and lounges around on immaculate art-deco furniture at all times. They say things no-one would say: “I’ve had enough of making people laugh,” announces Milne. “I want to make them see.” And they are never wholly convincing as human beings. Gleeson’s old-man make-up won’t fool anyone, Robbie’s cut-glass English accent has some cracks and chips, and the actors who play Billy as a boy and a teenager (Alex Lawther) could hardly look less like one another.

This artificiality puts a barrier between the viewers and the characters. We understand that Billy and Milne are in pain without ever feeling that pain ourselves. Another barrier is that Goodbye Christopher Robin doesn’t include a single sentence from the Winnie-the-Pooh oeuvre. Christopher Robin is introduced to the public when Milne’s poem Vespers is printed in Vanity Fair, but the film doesn’t quote a word of it. There are long sections, too, in which Milne’s fellow war veteran EH Shepard (Stephen Campbell Moore) sketches Billy and his toys. Shepard went onto illustrate all four of the Winnie-the-Pooh books, but we aren’t shown any of these illustrations, and the drawings we glimpse in his sketchpad are nothing like any of his actual pictures.

This coyness damages Goodbye Christopher Robin almost as severely as if Walk the Line had omitted all of its Johnny Cash songs or if Chariots of Fire had cut out all the shots of men running. But it isn’t too surprising. The film is made by Fox, but the big-screen rights to Winnie-the-Pooh are owned by Disney – and you can see why they didn’t want their valuable intellectual property to be tarnished by its association with such a dysfunctional family. In a way, Pooh Bear’s absence from Goodbye Christopher Robin is a tribute to how harsh it is. A wolf in teddy-bear’s clothing, it’s soft and fuzzy on the outside, but its anti-celebrity message has sharp, cutting teeth.