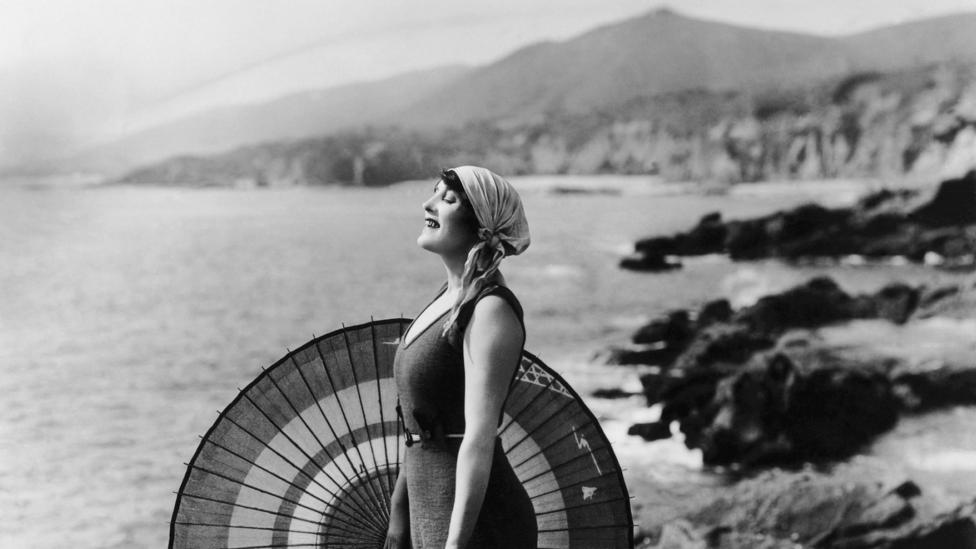 The Annette Kellerman Aquatic Centre resides in a large public park in the Sydney suburb of Marrickville, surrounded by a flat grassy expanse dotted with fig trees, Chinese elms and jacarandas. Outside the modern complex, which comprises three pools, Kellerman’s Cafe serves all-day breakfast. A series of plaques and photographs, inscribed with information about the legendary Australian’s life, are attached to a fence near where customers munch on food and sip their coffees. 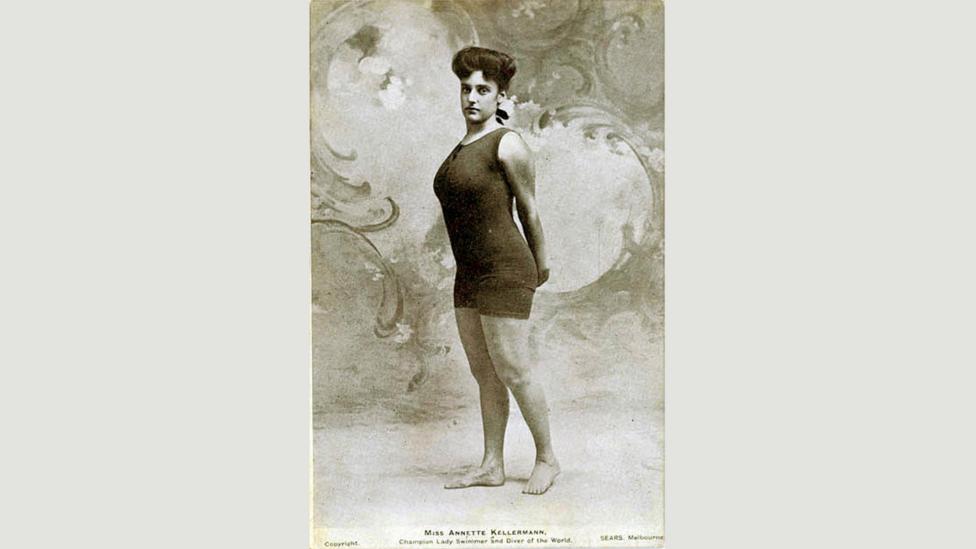 A swimming pool is a good place to begin exploring Kellerman’s stranger-than-fiction story, given that her legacy is synonymous with the water. Then again, it is synonymous with a great many things. Born not far from here, in the Sydney suburb of Potts Point in 1886, the stage and screen superstar boasted an incredible array of achievements, in industries where her impact is still felt today. She was an endurance swimmer, vaudeville entertainer, silent film star, entrepreneur, writer (of fiction and non-fiction), charity fundraiser and health-and-fitness campaigner.

You couldn’t make this story up, and if you did make it up probably nobody would believe you – Peter Cox

Like many larger-than-life figures, particularly those famous at the time of Kellerman’s celebrity (when the ‘golden age of magic’ was in full swing, legends such as Harry Houdini performing in packed-out theatres) there has been "a tendency for exaggeration or misrepresentation in many accounts of her life”, according to Kellerman expert Peter Cox. “But the facts are astonishing enough. You couldn't make this story up. And if you did make it up, probably nobody would believe you.”

Cox curated the Sydney Powerhouse Museum’s Million Dollar Mermaid: Annette Kellerman exhibition, which celebrates Kellerman’s life and charts her journey from fragile Sydney youth to bona fide international superstar. Many false reports over the years have claimed she was inflicted by polio as a child; in fact Kellerman was diagnosed as having the bone disease rickets. Required to wear steel braces, she started swimming to strengthen her legs. Then she became a teenage champion of the pool, breaking records in long and short distances. 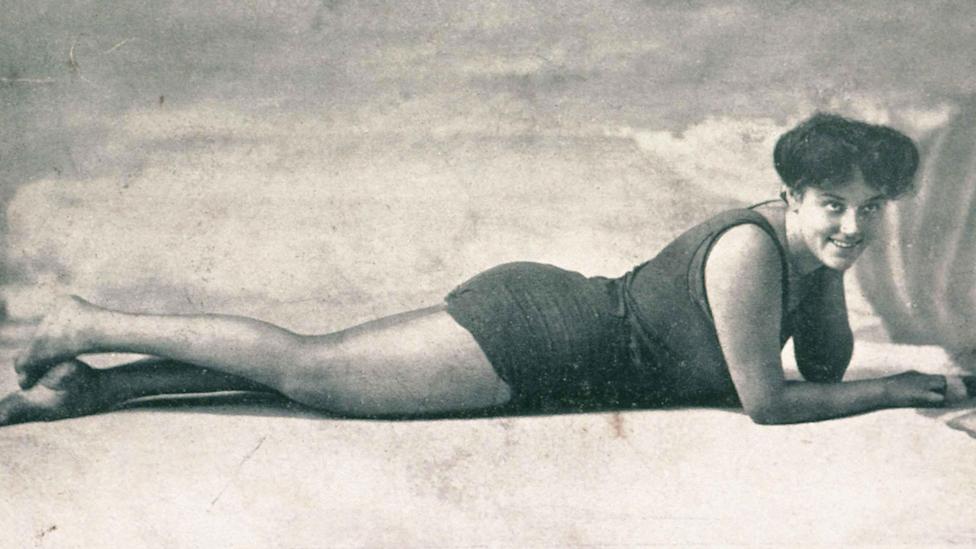 She became a record-breaking teenage champion in the pool, and made an attempt to swim the English Channel (Credit: Alamy)

Kellerman moved to London in 1905, when she was 18, making headlines when she attempted (and failed) to swim the English Channel. She wore, controversially, a men’s style swimsuit that revealed part of her thighs. Britain’s Daily Mirror newspaper extensively covered the event and a series of smaller swims leading up to it.

“At that time the Daily Mirror was pioneering the use of photographs in newspapers,” says Cox. “So what better things to show than photographs of a woman in a swimsuit? The newspaper sponsored the channel attempt and dedicated many column inches to it. This made her famous.”

More significantly, it also marked an early point in one of Kellerman’s most enduring accomplishments, for which she is perhaps best known: popularising the one-piece swimming suit. Subsequently, according to Cox, “she expanded the accepted notions of what was proper, in terms of bodily display, and made it possible for a generation of women to learn to swim.”

Queen of the sea

Kellerman arrived in America in mid-1907 and the next year was on the cover of Variety. In 1910 she was cited as the fourth highest paid vaudeville entertainer in the country, and by 1914 was receiving an astonishing $2500 per week, which is $60,000 (£45,000) today. Kellerman had finessed a vaudeville routine involving a mermaid performance and underwater ballet. There had been other aquatic-themed vaudeville acts before her, including ‘Blatz, the Human Fish’ – who, according to the 2010 book The Detroit Electric Scheme, read a newspaper and played trombone underwater. 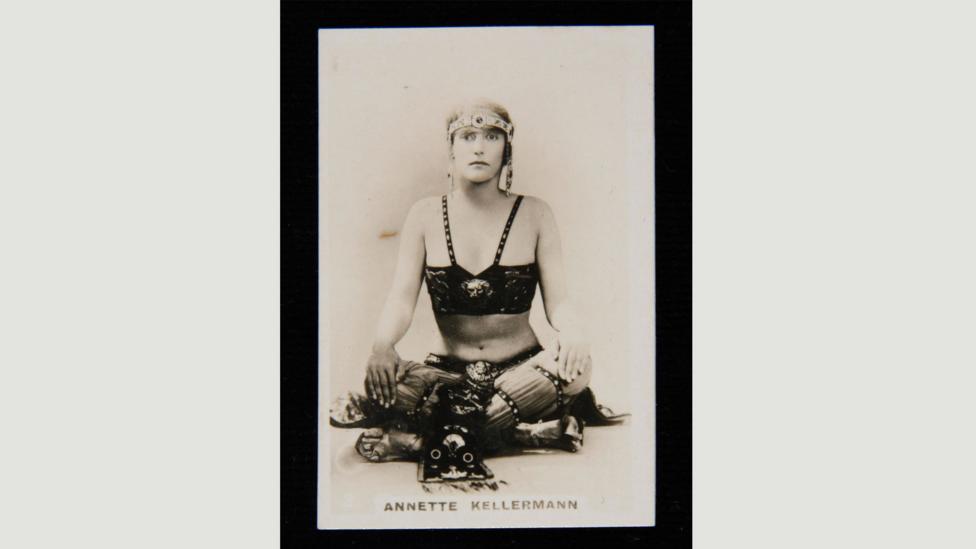 As a vaudeville entertainer, Kellerman performed as a male impersonator, as well as a mermaid (Credit: Alamy)

Unlike others, however, Kellerman’s act had longevity and drew large crowds season after season. It was padded out in various ways, with dancing, singing, acrobatics, wire walking and a routine in which she performed as a male impersonator. A large portrait photograph on display at the Million Dollar Mermaid exhibition shows Kellerman in male garb, wearing a top hat, monocle and bow tie, looking askance with a slightly impish, quizzical expression on her face.

She was a natural, as they say, and the movie business was about to come calling. Or as Cox puts it: “Annette Kellerman decided she wanted to become a film star.” In 2016 Forbes published an article titled Angelina Jolie Is The First Blockbuster Female Action Movie Star. That is demonstrably untrue, however, given Annette Kellerman (whose star was added to Hollywood’s Walk of Fame in 1960) pipped Jolie to the post by more than 100 years. 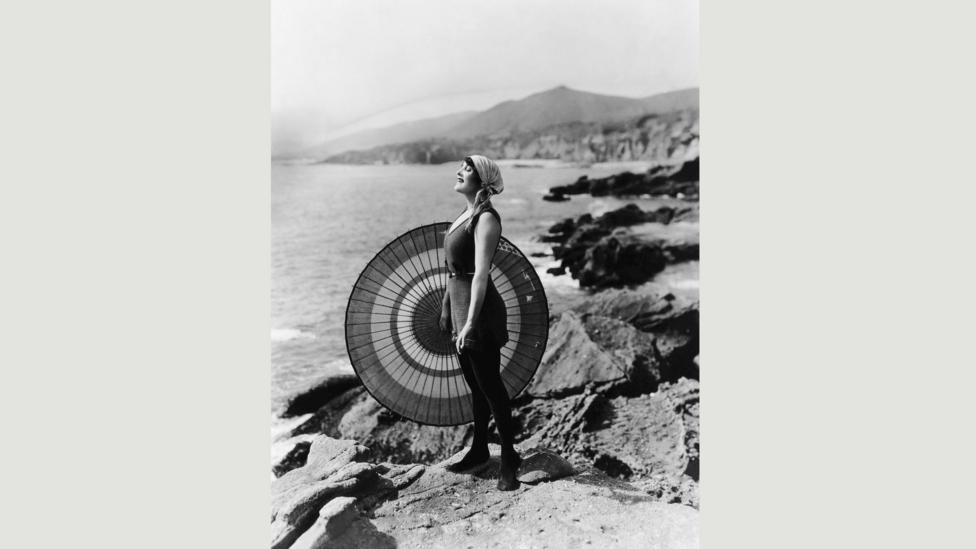 One of Kellerman’s best-known accomplishments is that she popularised the one-piece swimming suit (Credit: Alamy)

Bringing her mermaid act to the screen, Kellerman – the first Australian woman to star in American movies – headlined four feature films made between 1914 and 1920. In these fantasy/adventure pictures she played a daring hero and performed her own stunts. This included, in 1918’s Queen of the Sea, diving off a tightwire strung 20m (66ft) in the air, across water and rocks. The film was produced by the legendary Hungarian-American executive – and Hollywood founding father – William Fox (aka the ‘Fox’ in 20th Century Fox).

Fox also produced Kellerman’s previous feature, A Daughter of the Gods. With an estimated budget of $1million, it was at the time the most expensive film ever made. A Daughter of the Gods caused considerable controversy for featuring what is believed to be cinema’s first full-frontal nudity scene from a leading actor. This was Kellerman, of course, her bare-skinned torso partly obscured by long dark hair. Tragically, most of the star’s first four features (comprising the lion’s share of her on-screen work) have been lost. 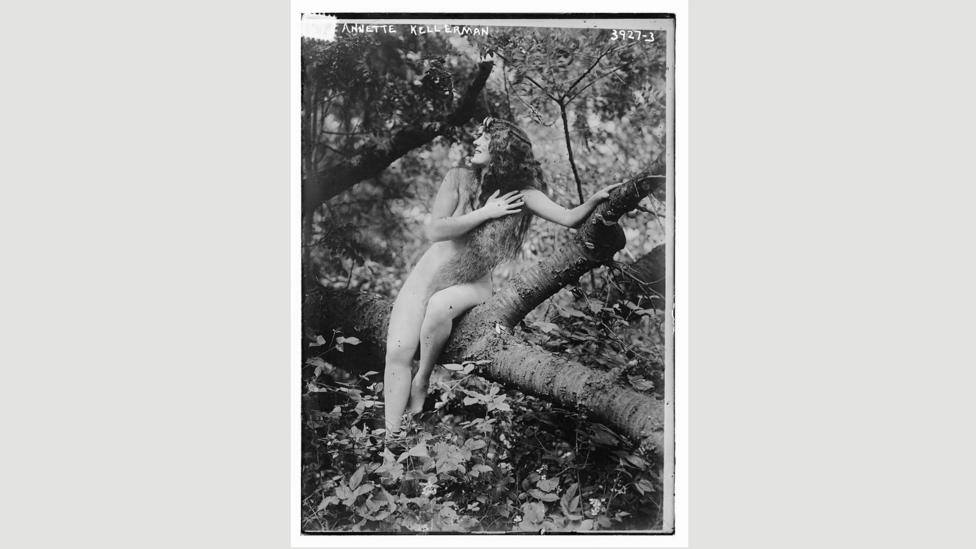 She was judged as having the perfect figure, bearing physical attributes most similar to the Venus de Milo

Kellerman, a vegetarian and teetotal, was brilliant at exploiting her body and status as a fitness extraordinaire. In one of many unusual appendages to her story, she was judged by a Harvard University doctor in 1908 – who reportedly inspected thousands of women – as having ‘the perfect figure’, bearing physical attributes most similar to the Venus de Milo. Kellerman had no qualms reminding the public of this. She even wrote a self-help book promising that if readers followed her advice, they too could “have a figure as perfect as mine.”

Kellerman’s professional exploits may have been shamelessly entrepreneurial, including publishing magazines and brochures splashed with photographs of her own image. But her attitudes towards fitness and beauty were also well ahead of their time. 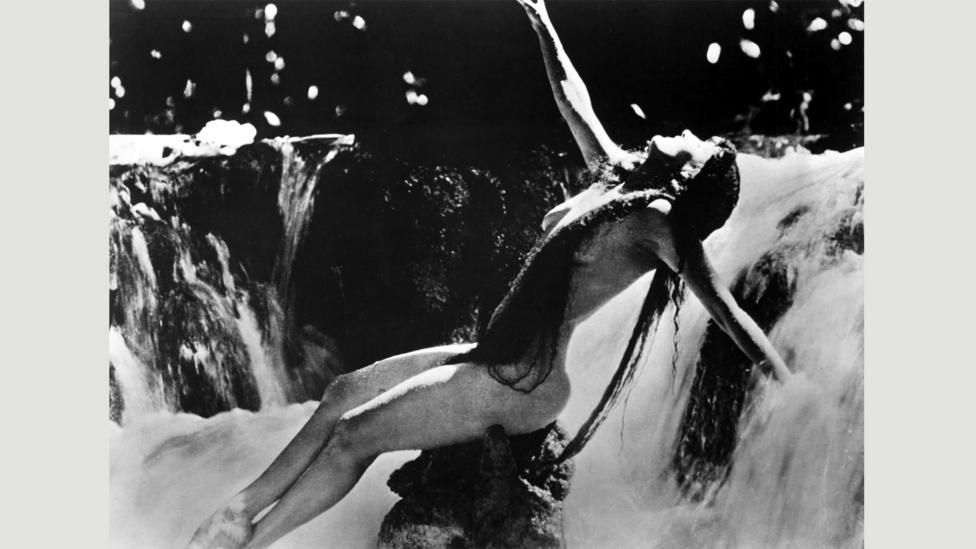 Kellerman had no qualms reminding the public of her ‘perfect figure’, writing a self-help book in order to help others achieve her shape (Credit: Alamy)

"A lot of her advertisements were for women to build up the size of their bodies, not decrease it,” says Cox. “Kellerman believed the key to increasing health was diet and exercise. We take that for granted now, but back in 1912, putting those things together was far from common. Her synthesis of underwater swimming and performance also helped to form the sport of synchronised swimming, of which she can be regarded as the grandmother.”

Married to her long-time husband and manager, James Raymond Louis Sullivan, Kellerman played an active role during World War Two in Australia, producing charity shows for the Red Cross. She spent her final years on the Gold Coast, in the Australian state of Queensland, and died, age 88, in 1975. 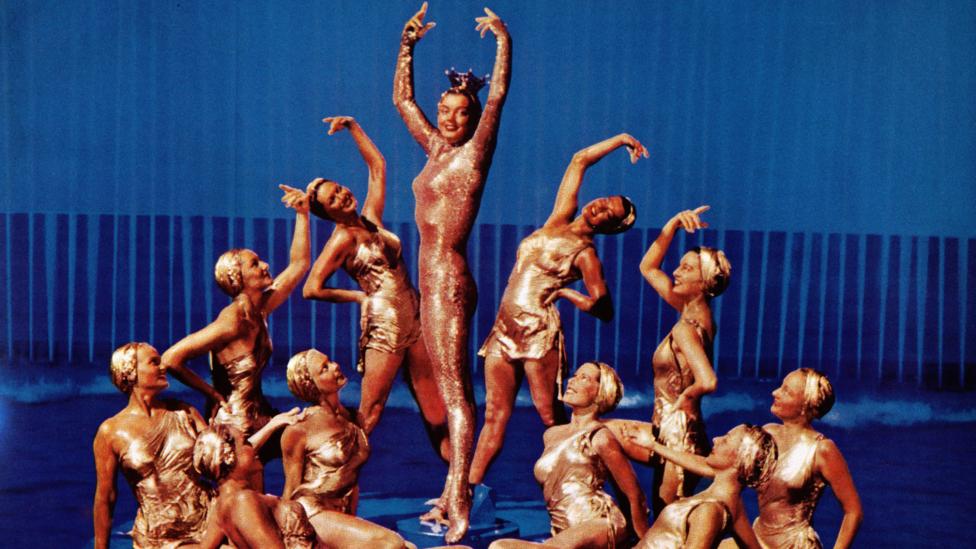 Kellerman’s life was commemorated in a 1952 MGM biopic, Million Dollar Mermaid (The One Piece Bathing Suit in the UK) starring Esther Williams as Kellerman, and choreographed by the legendary Busby Berkeley. The subject herself was unimpressed by it, however, describing the film as “a namby pamby attempt” to convey her story.

Is this extraordinary woman adequately remembered all these years later? The two twenty-something women working behind the front desk at The Annette Kellerman Aquatic Centre recognise her name, of course, but “not before I started working here,” says one.” And the other: “I’m guessing probably about 1% of people who come through here know who she is.”

Perhaps Peter Cox sums it up best: “I don’t think Annette Kellerman is remembered well enough, given all the things she did. It was a unique combination of achievements. Her influence outlasted her stardom.”