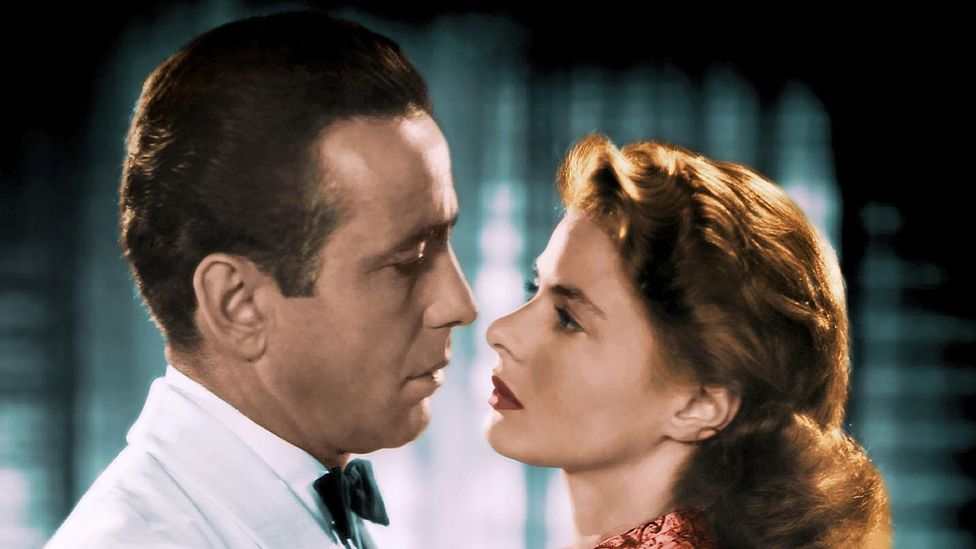 By Nicholas Barber 24th November 2017
It’s 75 years since Casablanca was released. Nicholas Barber looks at how the classic romantic melodrama was really about the plight of the displaced.
N

No self-respecting film festival is complete, at the moment, without some acknowledgement of the ongoing refugee crisis. This year’s Cannes competition line-up included Jupiter’s Moon, a Hungarian chase movie featuring a refugee who is reborn with superhuman powers (no, it doesn’t really work); and the Venice Film Festival premiered Human Flow, Ai Weiwei’s globe-trotting documentary about the crisis. With all due respect, though, it’s hard to imagine many of these films being watched and rewatched for decades to come. They’re timely, rather than timeless. And yet one story of a comparable refugee crisis is still regarded as Hollywood’s most entertaining movie, 75 years after it was released in November 1942: Casablanca.

It isn’t just about refugees, of course. On the surface, Casablanca is a romantic melodrama with an exotic wartime backdrop. Its hero is Rick (Humphrey Bogart), the cynical and absurdly well-tailored American owner of a nightclub in the Moroccan city of Casablanca in 1941. He claims not to care about the war tearing Europe to pieces. “Your business is politics,” he snarls. “Mine is running a saloon.” But his hard shell cracks and crumbles with the arrival of an especially beautiful customer, Ilsa Lund (Ingrid Bergman), the woman he loved in Paris two years earlier. 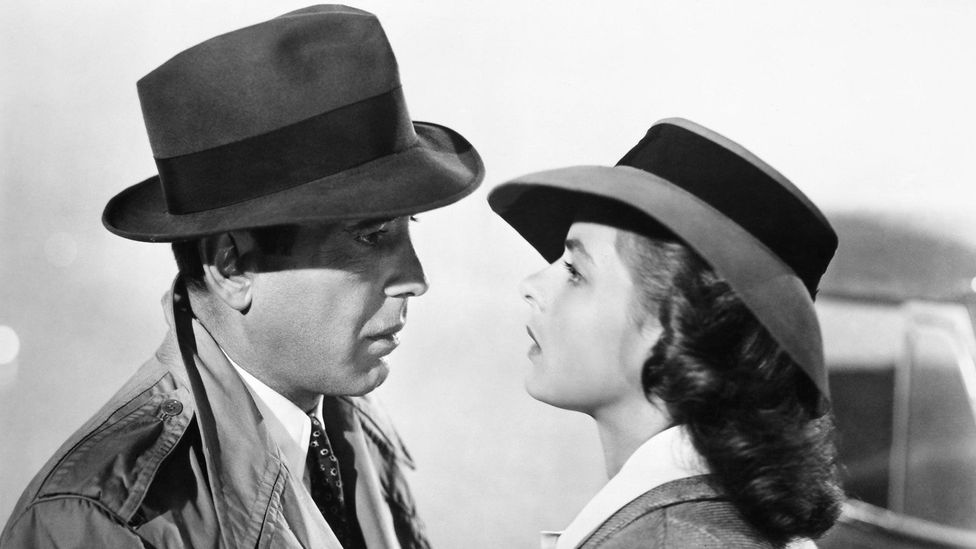 Unbeknownst to Rick, Ilsa was married at the time to a Czech resistance leader, Victor Laszlo (Paul Henreid), but she believed him to have been killed in a German concentration camp. When she learnt that he was actually still alive, she left Rick and returned to her husband. And now Laszlo and Ilsa have come to the very bar that Rick opened in order to forget her. (“Of all the gin joints in all the towns in all the world, she walks into mine.”) He has to decide whether to let the Laszlos fall into the clutches of a Gestapo officer, Major Strasser (Conrad Veidt), or to pass on two “letters of transit” which will spirit them away from Morocco, no questions asked.

Tragic romance aside, Casablanca has more laughs than most comedies and better songs than most musicals. It was adapted from a play, Everybody Comes to Rick’s, by Murray Burnett and Joan Alison, and yet it never comes across as stagey. The director, Michael Curtiz, had made some of Errol Flynn’s most exuberant swashbuckling yarns, and Casablanca seems almost as action-packed – zipping along so energetically that we don’t have time to notice that we’re watching a bunch of people talking in a smoky bar.

Not that the talking is anything to complain about. With Julius and Philip Epstein providing the zingers, and Howard Koch bumping up the geopolitics, Casablanca is probably the most quoted Hollywood film of all – and the most misquoted film, too. “Play it again, Sam,” is a line which Rick doesn’t quite say, but that hasn’t stopped the rest of us saying it ever since. 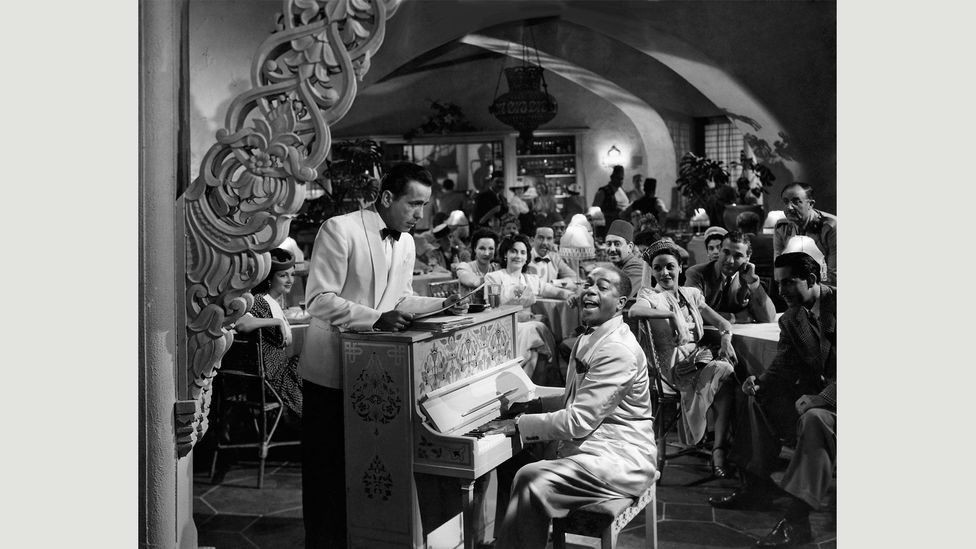 “Play it again, Sam” is one of the most misquoted lines in cinema history (Credit: Alamy)

Could a modern Hollywood film be as much fun while concerning itself with the plight of the world’s refugees? It’s unlikely, to say the least. But it’s this concern which gives Casablanca its heart, and which makes it searingly relevant in the 21st Century.

We’ve grown used to seeing displaced people making the arduous journey to Europe. Casablanca reminds us that, not so long ago, they were travelling in the opposite direction.

The subject is introduced in an opening montage. “With the coming of the Second World War,” intones a grave narrator, “many eyes in imprisoned Europe turned hopefully, or desperately, toward the freedom of the Americas. Lisbon became the great embarkation point. But not everybody could get to Lisbon directly, and so a tortuous, roundabout refugee trail sprang up. Paris to Marseilles, across the Mediterranean to Oran, then by train, or auto, or foot, across the rim of Africa to Casablanca in French Morocco.”

The newsreel clips which accompany this voice-over – families trudging along country roads, their belongings stuffed into suitcases and sacks – are all too similar to the footage on nightly news programmes today. But the differences are fascinating. We’ve grown used to seeing displaced people making the arduous journey northwards, over the sea from Africa, and then on through Europe. Casablanca reminds us that, not so long ago, they were travelling in the opposite direction.

When they reach Morocco, many of these people pass the time in its classiest nightspot, Rick’s Café Americain. True, it’s more comfortable than most refugee camps, but the muttered negotiations at its tables will be familiar to anyone who’s seen a documentary about the current crisis: the selling of jewellery for a fraction of its cost; the purchasing of berths on fishing boats for extortionate sums. 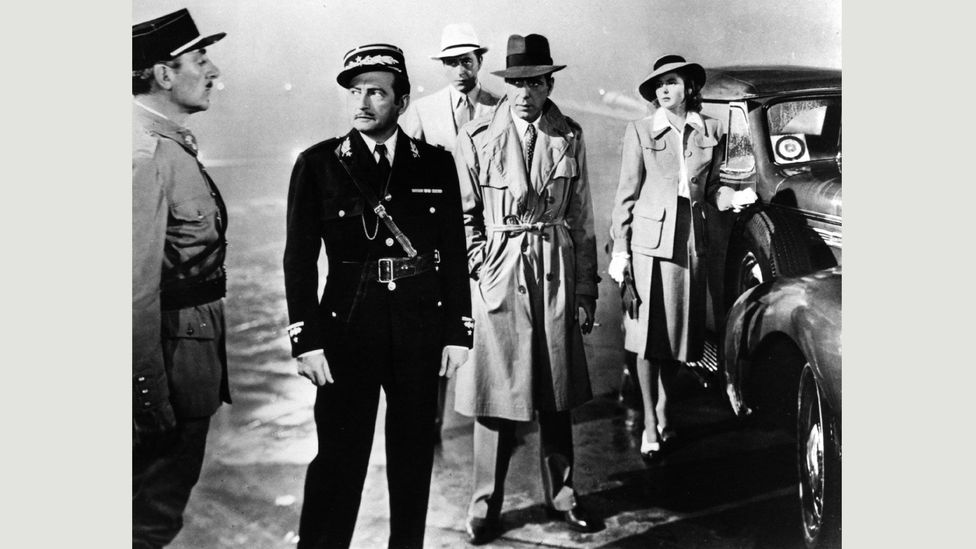 And the refugees don’t just trade with jewellery and money. Renault (Claude Rains), the city’s suave French police chief, exchanges exit visas for sexual favours – a transaction which the film views, initially at least, as a harmless game. In one scene, Renault’s assistant comes to his desk and tells him that “another visa problem has come up”. Renault straightens his tie and smiles. “Send her in,” he says. We can respect Curtiz and his team for smuggling such risqué material past the censors, and we can appreciate Rains’ urbane performance. But the film’s forgiving attitude towards Renault’s exploitation hasn’t aged well.

Still, Rick himself is above such abuse. “I don’t buy or sell human beings,” he informs Ferrari (Sydney Greenstreet), the city’s black-market kingpin. But as time goes by, Rick realises that turning a blind eye to the buying and selling is just as bad. There is a touching scene in which he rigs the café’s roulette wheel so that a Bulgarian newlywed (Joy Page) doesn’t have to sleep with Renault – thus bringing a tear to the eyes of Rick’s employees and to the audience alike. More moving still is the scene in which the café’s head waiter (SZ Sakall) has a brandy with two elderly Austrians who are about to leave for the US, and compliments them on their broken English. Rainer Werner Fassbinder, the German director, declared that this humane little sequence boasts “one of the most beautiful pieces of dialogue in the history of film”.

While the tale of the star-crossed Rick and Ilsa is a tinseltown fantasy, it is underpinned by the cast’s own traumatic experiences

Several other scenes are reported to have had the cast and crew in tears, partly because so many of them were genuine refugees. Veidt may play a Nazi in the film, but in reality he fled from the Nazis. Both Sakall and Curtiz were Hungarian Jews: Sakall’s three sisters and his niece died in concentration camps. “Nearly all of the some seventy-five actors and actresses cast in Casablanca were immigrants,” says Noah Isenberg in his new book about the film, We’ll Always Have Casablanca. “Among the 14 who earned a screen credit, only three were born in the United States: Humphrey Bogart, Dooley Wilson [the Café’s crooning pianist, Sam], and Joy Page.” (One of the film’s subtlest and slyest ironies is that the so-called ‘Café Américain’ isn’t in America and has barely any Americans in it. What, we’re forced to ask, does ‘American’ mean, anyway?) 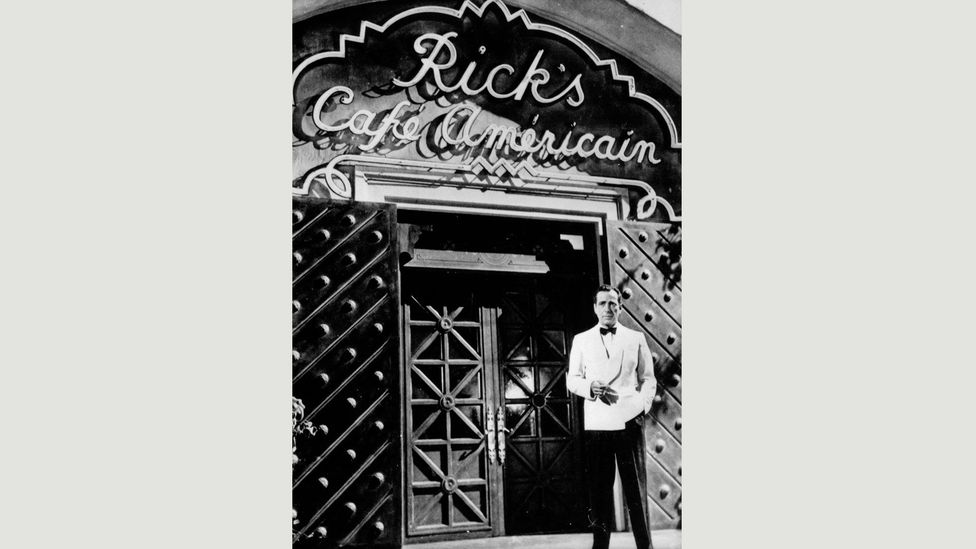 The name of Rick’s café prompts the viewer to ask what ‘American’ means (Credit: Alamy)

And so, while the tale of the star-crossed Rick and Ilsa is a Tinseltown fantasy – for a start, there were never any Nazi officers in the real Casablanca – it is underpinned by the cast’s own traumatic experiences. That’s one reason why the film is so potent, whether you’re aware of the actors’ backgrounds or not. “If you think of ... those small roles being played by Hollywood actors faking the accents,” wrote Pauline Kael in The New Yorker, “the picture wouldn’t have had anything like the colour and tone it had.”

Luckily, Los Angeles in 1942 wasn’t too different from Rick’s café. It was the place where Jewish exiles from all over Europe gathered, practised their English, enjoyed the hospitality and the companionship, and dreamt of happier lives. And if the plot of Casablanca argues the case for helping refugees, the film’s very existence is a pretty strong argument, too. After all, if it weren’t for the refugees in Hollywood, then it couldn’t have produced its most beloved classic.