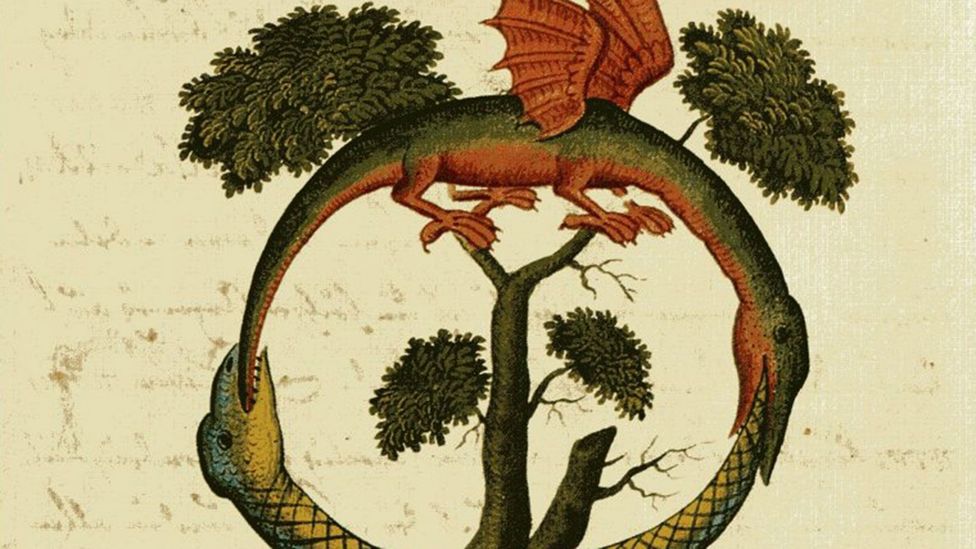 By Joobin Bekhrad 4th December 2017
As a new exhibition looks at the concept of the loop, Joobin Bekhrad discovers how one symbol had different meanings in ancient Egypt, Hindu mythology and Renaissance alchemy.
I

It is perhaps fitting that the ancient ouroboros marks the beginning – and end – of Never Ending Stories, a major exhibition currently showing at Germany’s Kunstmuseum Wolfsburg. Spanning multiple mediums, time periods, and fields, the exhibition explores the concept of the loop on a hitherto unseen scale. “The loop is very telling for our times,” says curator Ralf Beil, “and the concept of the loop has never been presented in a larger consideration of time and space.” Organised into 14 thematic sections, Never Ending Stories looks at loops in not only religion and philosophy, but also modern and contemporary art, film, music and literature. 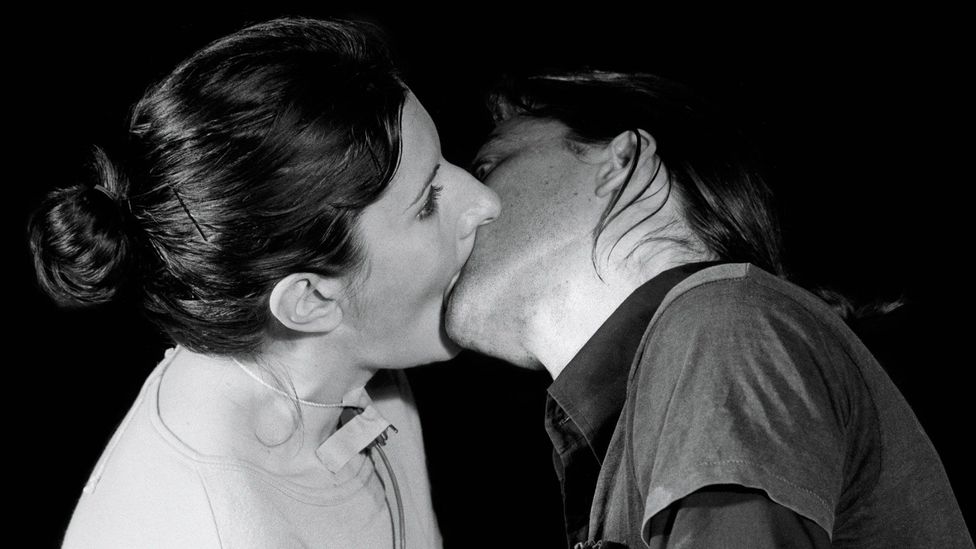 For Breathing In Breathing Out (1977), Marina Abramović and Ulay blocked their nostrils with cigarette filters and pressed their mouths together (Credit: LIMA, Amsterdam)

And the ouroboros is one of the most compelling, a symbol that has been the subject of awe and wonder for millennia. Literally meaning ‘tail-devourer’ in Greek, it has appeared in numerous forms in a wide array of contexts and geographies. In its original and most common variation, it depicts a snake eating its own tail in a closed circle. The ouroboros, however, isn’t Greek, and certainly isn’t a celebration of self-cannibalism. What, then, are its origins, and what does it signify?

The oldest-known ouroboros appeared on a golden shrine in the tomb of Tutankhamen – ‘King Tut’ – in Egypt in the 13th Century BC, after a brief lull in traditional religion brought about by his predecessor, Akhenaten. According to leading Egyptologist Jan Assmann, the symbol “refers to the mystery of cyclical time, which flows back into itself”. The ancient Egyptians understood time as a series of repetitive cycles, instead of something linear and constantly evolving; and central to this idea was the flooding of the Nile and the journey of the sun. 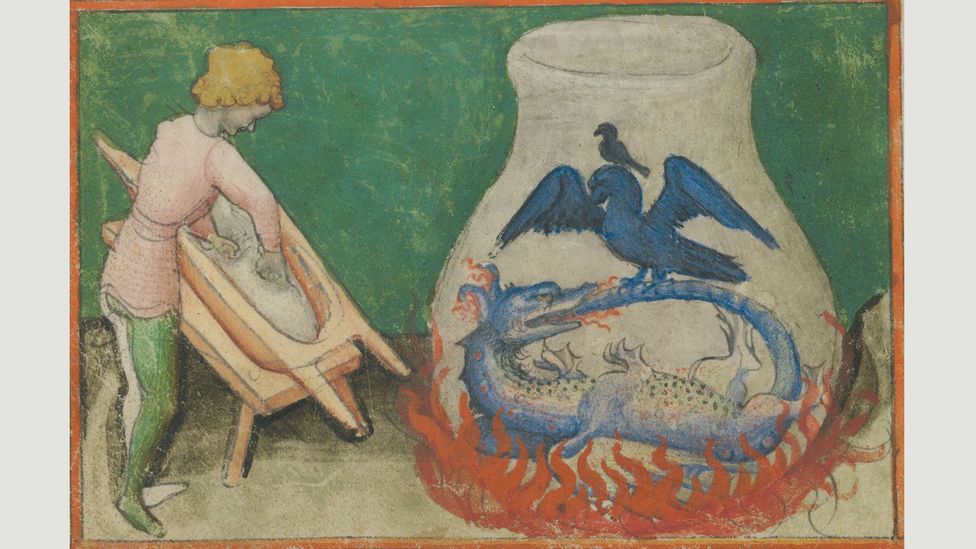 Aurora Consurgens, a 15th-Century alchemical manuscript, features the ouroboros, linked with the symbols of the sun, moon, and mercury (Credit: Zentralbibliothek Zürich)

The flooding of the Nile in summer marked the beginning of the year, and served as a metaphor of cyclical time, flowing “back into itself like a circle … [enabling] renewal, repetition, and regeneration,” as Assmann says. Similarly, the sun was believed to be the source of cyclical time, undertaking a nightly journey to the waters of Nun (a sort of primordial void), fraught with all sorts of obstacles, whence it would find its way back to the sky. As such, the ouroboros in its original Egyptian context symbolised repetition, renewal, and the eternal cycle of time.

Known as the oldest allegorical symbol in alchemy, the ouroboros represented the concept of eternity and endless return

Like the sun, the ouroboros underwent a journey of its own. From Egypt, it found its way to the Greek alchemists of Hellenistic Alexandria. In the Chrysopoeia (transmutation into gold) of Cleopatra, the ouroboros appears slightly differently. A pictorial alchemical papyrus from the 3rd-Century AD, it dealt with the creation of gold, and the ouroboros appears among the mysterious symbols and images encircling the Greek words ‘One is All’.

Known as the oldest allegorical symbol in alchemy, the ouroboros in this context represented the concept of eternity and endless return, as well as the unity of time’s beginning and end, rather than the Egypt-specific journeys of the sun and the Nile. Elsewhere on the papyrus, in a double ring, appears the complete maxim, of which ‘One is All’ is only a part: ‘One is All, and by it All, and for it All’, it reads, ‘and if it does not contain All, then All is Nothing’. 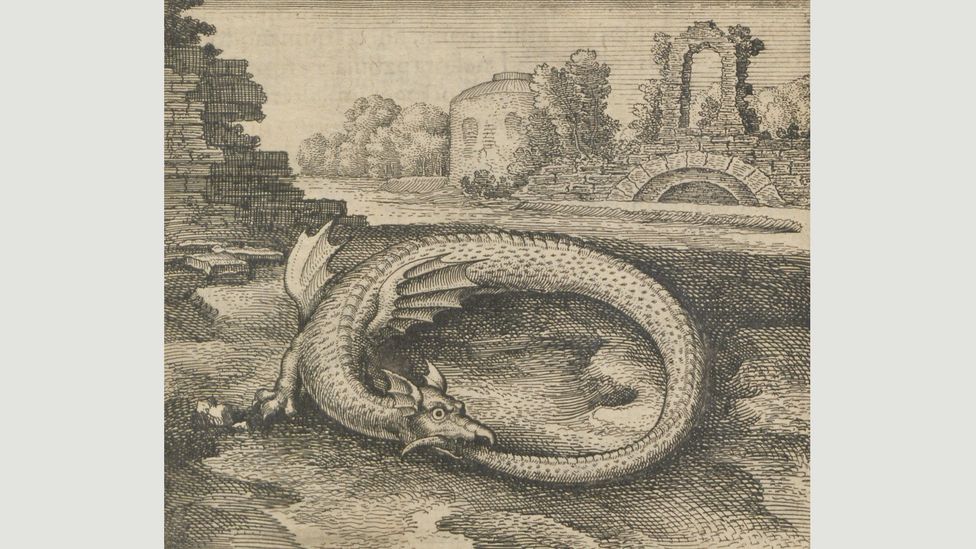 The ouroboros was also of significance to the Gnostics. From a Gnostic viewpoint, the opposing ends of the ouroboros were interpreted as the divine and earthly in man, which, despite being at odds with one another, existed in unison nonetheless. In this sense, it is comparable to the Chinese yin and yang, depicting the harmony of contrary forces, as well as the cosmic dichotomy of light and darkness in Manichaeism and the Zoroastrian philosophy of the farvahar, which first posited that each soul was composed of a pure, divine component, as well as a human one.

The ouroboros also appears in other ancient traditions. In Norse mythology, the serpent Jörmungandr encircles the world with its tail in its mouth, while in Hinduism, the ouroboros forms part of the foundation upon which the Earth rests. In the more widespread Roman variant of Iranian Mithraism, Zurvan, symbolising ‘boundless time’, is depicted with an ouroboros entwined around his body, while the Mesoamerican deity Quetzalcoatl is often seen in the form of an ouroboros. 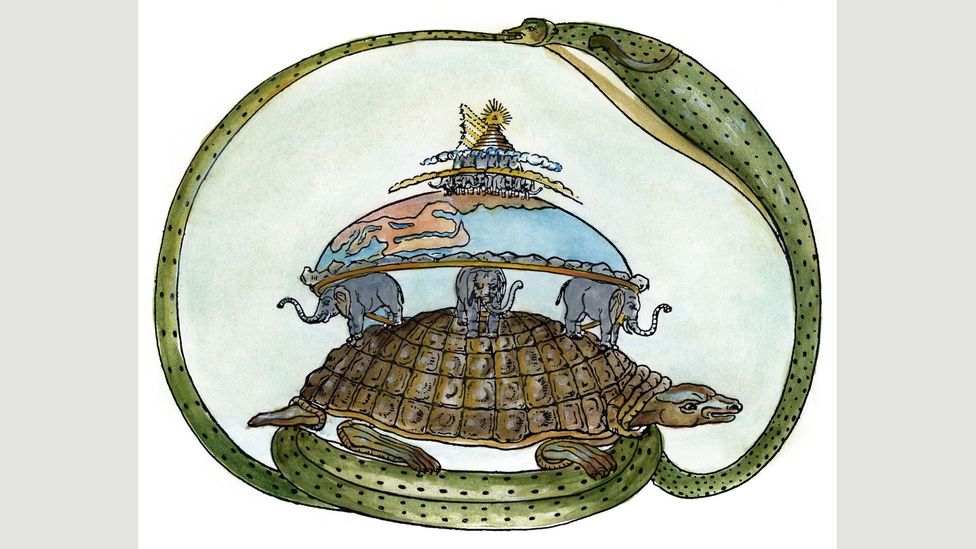 The ouroboros is part of Hindu iconography, as in this drawing of a tortoise supporting elephants upon which the Earth rests, enclosed by the serpent, Asootee (Credit: Alamy)

As if this weren’t enough, the ouroboros went on to enjoy much popularity among Renaissance alchemists. Again representing the infinite nature of time and the eternal, it was seen in the eyes of the alchemists as the ultimate obstacle to be overcome in the Magnum Opus, their incessant struggle; for to become immortal – their chief aim – meant to break the incessant cycle of the ouroboros once and for all. That they would also come to possess, through their experiments, the prized ‘philosopher’s stone’ that would bring them all the bling in the world, was mere icing on the cake.

Never Ending Stories begins and ends with the ouroboros because it is a symbol that has resonated throughout so many different eras. “Its fascination derives from the archaic preciseness of the image,” explains Beil, “instantly understandable by every culture, and thus used by a majority of them for two-thousand years”. The exhibition looks at other ways in which the loop has been represented, creating a multi-sensory experience with myriad elements – visual, aural, and physical – repeating ad infinitum. 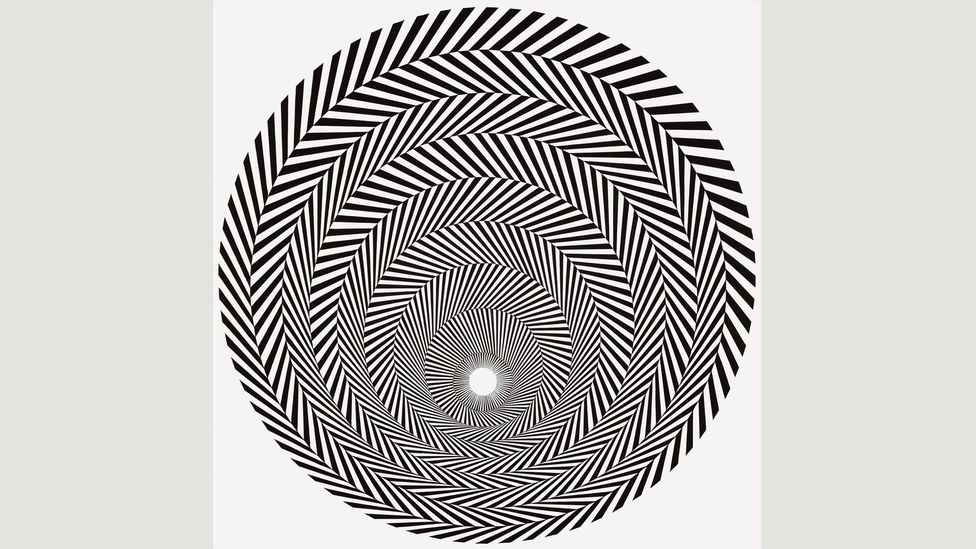 Other loops in Never Ending Stories include hypnotic works like Blaze 4 (1964) by Bridget Riley, which mesmerises with its optical effects (Credit: Bridget Riley)

Beil has placed the loops on display into five categories: continuous circles and squares (like the ouroboros); Möbius strips; infinite cycles produced by the Droste Effect (or, as André Gide called it, mise en abyme); Penrose stairs, never-ending staircases partly inspired by the works of MC Escher (and which, in turn, inspired the works of Escher); and permanent, identical loops of all kinds, irrespective of their elements.

Aside from delving into the nature of loops and their various forms, the exhibition highlights their ubiquity in esoteric and historical, as well as more popular contexts. Take, for instance, the well-known Greek myth of Sisyphus, forever condemned to roll a boulder up a hill in Tartarus, which rolls back down again before it can surpass it. Or, Nietzsche’s Thus Spoke Zarathustra: “Behold, we know what you teach,” says the author to his protagonist (the antithesis, in fact, of the historical Iranian prophet), “that all things occur eternally and we ourselves along with them, and that we have already been here times eternal and all things along with us.” 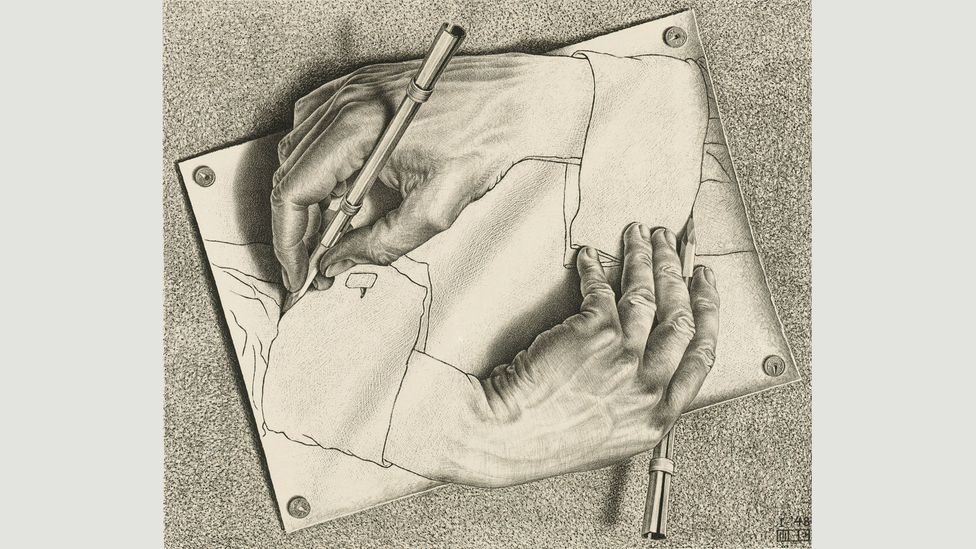 Works by MC Escher, such as Drawing Hands (1948), contain visual paradoxes, creating spirals that have no end and no beginning (Credit: 2017 The MC Escher Company)

In the same setting can be seen the drawings of Escher, Yayoi Kusama’s glittering Infinity Mirrored Roominstallation – “a trance-like, four-by-four-metre infinity of light: a highly cyclical eternity”, according to Beil – Marcel Duchamp’s spiralling Rotoreliefs from the 30s and 60s and architectural proposals by Le Corbusier, while songs like Donna Summer’s I Feel Love and Kraftwerk’s Autobahn form part of the soundtrack.

From the ancient Egyptian journey of the sun to Donna Summer, the loop – so often represented by the ouroboros – has been inextricably bound to our concept of time. The Renaissance-era alchemists saw the ouroboros as something to break out of in pursuit of a linear, rather than cyclical, eternity – and today, it might make us reconsider how we view each moment that passes.