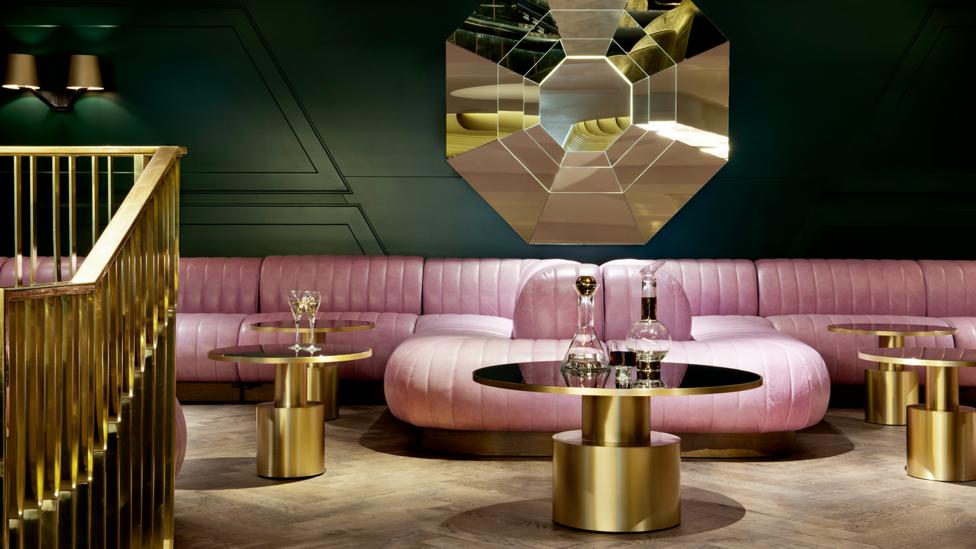 As a new exhibition at London’s Victoria & Albert Museum highlights, ocean liners were once a passport to a new, forward-looking world of luxury and romantic adventure. “For many people, boarding a liner was their first brush with modernity,” points out Ghislaine Wood, co-curator of Ocean Liners: Speed and Style. 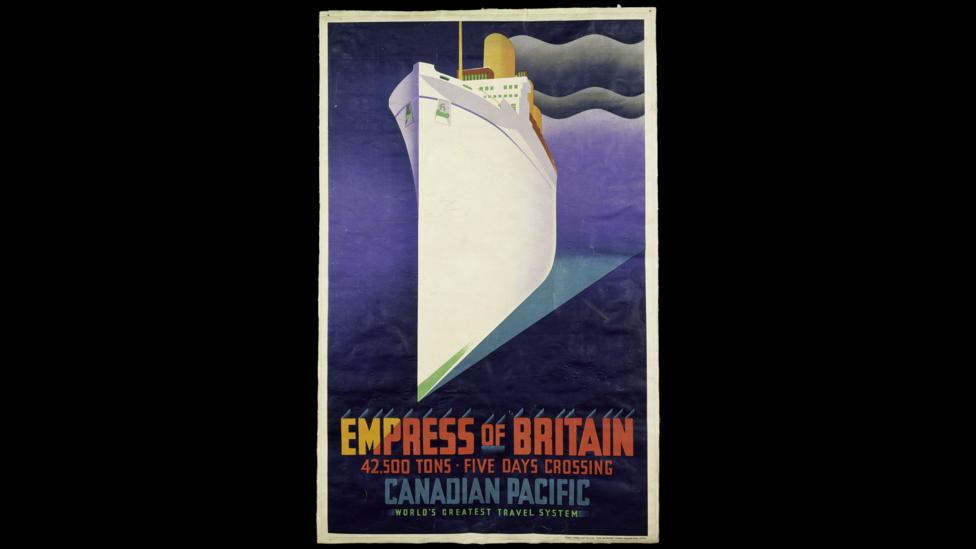 The very fact that French artist Cassandre and others depicted liners in 1920s and 1930s posters as gigantic ocean-bound vessels looming overhead suggests they were awe-inspiring, and to be looked up to both literally and metaphorically. Their steam-powered progress through the waves was itself emblematic of wider progress in society, while the posters’ heightened colours – sapphire skies, emerald seas – intensified their glamour. 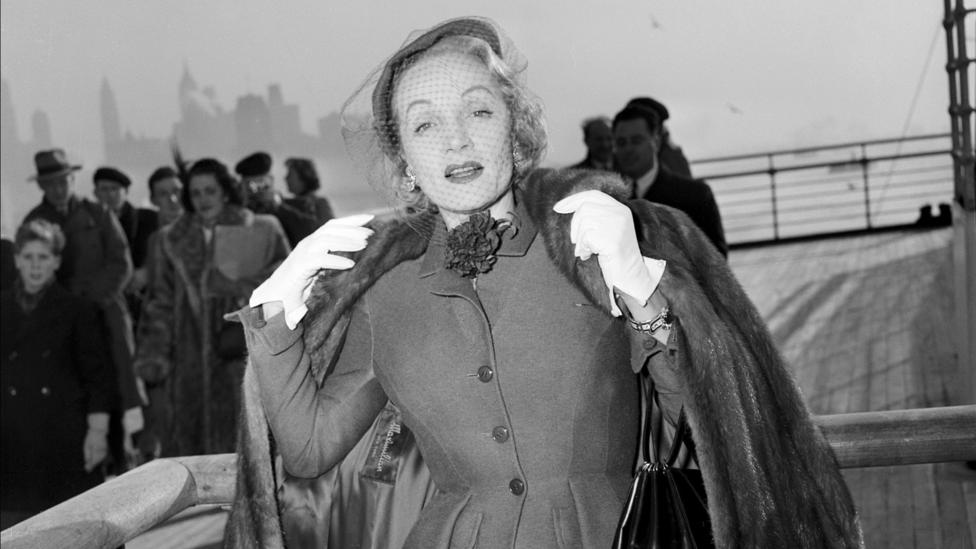 Marlene Dietrich cuts a glamorous figure as she poses in a day suit by Christian Dior on board the Queen Elizabeth in 1950 (Credit: Getty)

“The show is about the cultural significance of the liner,” elaborates Wood. “It traces its history from its beginnings as Isambard Kingdom Brunel’s steamship, Great Eastern of 1858, to its influence on modernist architects such as Le Corbusier, who saw the liner as a model for high-density housing.” The exhibition brings together over 250 objects that explore engineering, architecture, interior, furniture, art, graphic design and fashion. 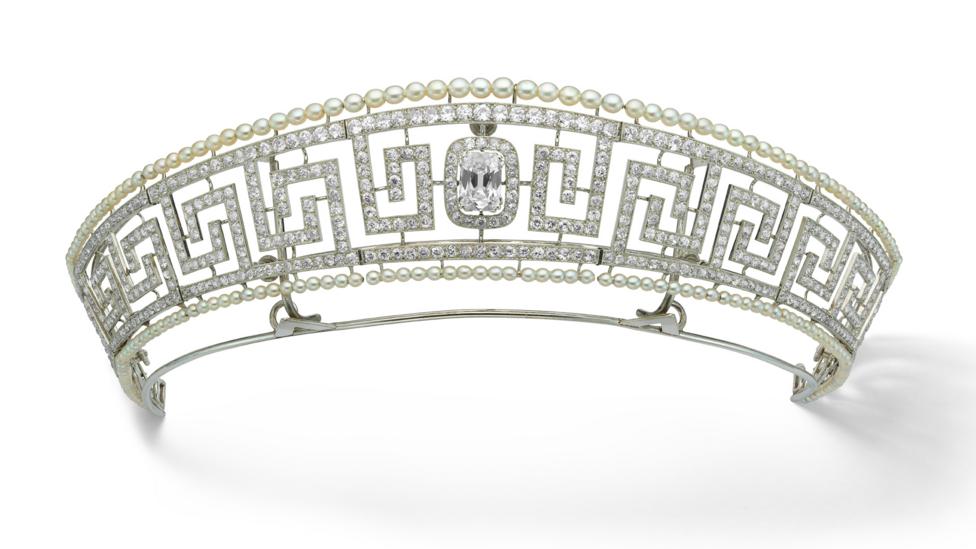 An elegant diamond and pearl tiara, previously owned by Lady Marguerite Allan, was saved from the Lusitania (Credit: Cartier)

The interiors of liners mirrored design trends of the day – among the items on show is an ornate, fussy, Louis XV-style carved wood panel that decorated the first-class lounge of the Titanic, which sank in 1912; it was owned by White Star Line, which merged in 1934 with Cunard.

Another stylistic watershed in European liner design came with the International Exhibition of Modern Decorative and Industrial Arts held in Paris in 1925, which brought to public attention the work of avant-garde artists and designers who embraced the sleek lines and opulent materials of Art Deco and modernism. The streamlined liner – a perfect icon of the machine age – was naturally in tune with this aesthetic. Coupled with this was its velocity: from the late 19th Century to 1952, liners competed for the much-coveted Blue Riband, awarded to passenger liners crossing the Atlantic at record-breaking speed. 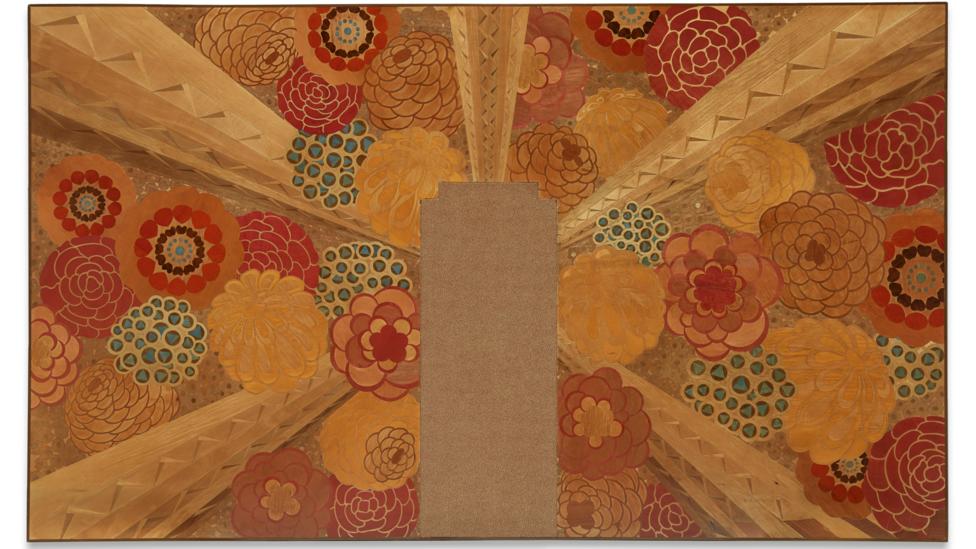 The V&A also displays a gold lacquer panel by Art Deco designer Jean Dunand for French liner the Normandie, the most opulent cruise ship of the Deco era, owned by Compagnie Générale Transatlantique (CGT). Among other artefacts are paintings by Cubist artist Albert Gleizes, and an hourglass-shaped Christian Dior suit worn by Marlene Dietrich on the Queen Mary in 1950 as it arrived in New York. Photographing movie stars on liners was a publicity-savvy ploy used by companies to hammer home their ships’ glamorous image.

As early as 1871, Jules Verne, in his novel Floating City – about his journey aboard Great Eastern – recognised that, in symbolic terms, steamships were not empty vessels but were charged with meaning: “It is a floating city… The Great Eastern is not merely a nautical engine but rather a microcosm, and carries a small world within it, an observer will not be astonished to meet here… all the instincts, follies and passions of human nature.” 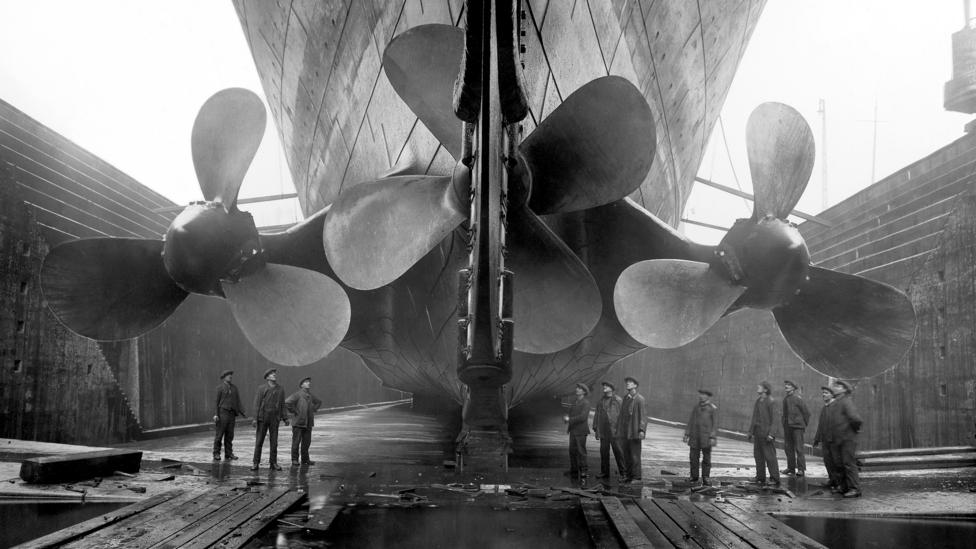 Liners were indeed microcosms of a kind. They partly appealed because they were self-sufficient: CGT’s liner Paris, launched in 1921, which transported wealthy Americans to Europe and was an early adopter of the nascent Deco style, housed a cinema. Another CGT liner, Atlantique, which made its maiden voyage in 1931, boasted an innovative layout in its first-class quarters: here the ventilation shafts were separated, freeing up enough space to accommodate a 137m-long, 5m-wide promenade, which, lined with shops selling luxury brands and services, emulated a chic Parisian boulevard, complete with its own motorcar. 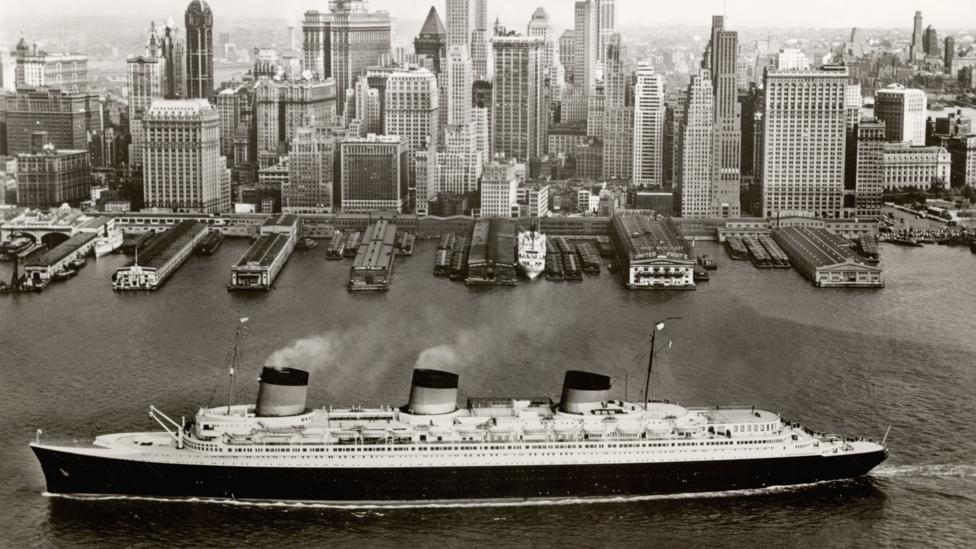 Ocean liners such as the Normandie, shown in New York, were symbols of luxury and modernity (Credit:Collection French Lines)

Liners were not always synonymous with luxury travel. They had once facilitated large-scale emigration: between 1900 and 1914 over 11 million people emigrated from Europe to America. But in 1921, the US tightened its immigration regulations, prompting shipping companies to woo the tourist market. In the 1920s, they introduced more second- and third-class cabins, the latter catering to newly prosperous Americans contemplating a European holiday. Although travelling by liners was partially democratised, for many they remained an aspirational pastime.

By contrast, Le Corbusier, equated liners with modernity, dubbing them “a liberation from the cursed enslavement of the past.” He believed that architects should look to their engineering and structure – not their Art Deco interiors, which modernists disparagingly referred to as ‘le style paquebot’ (passenger ship style) – as the inspiration for radically functionalist architecture. “A pure architecture, precise, clear… Contrast this with carpets… damask wallpapers, gilded furniture, dowager duchess colours…,” he proselytised in his 1923 book Towards a New Architecture. Le Corbusier’s social housing block in Marseille, L’Unité d’Habitation, completed in 1952, features a flat roof emulating a liner’s deck with its own swimming pool. 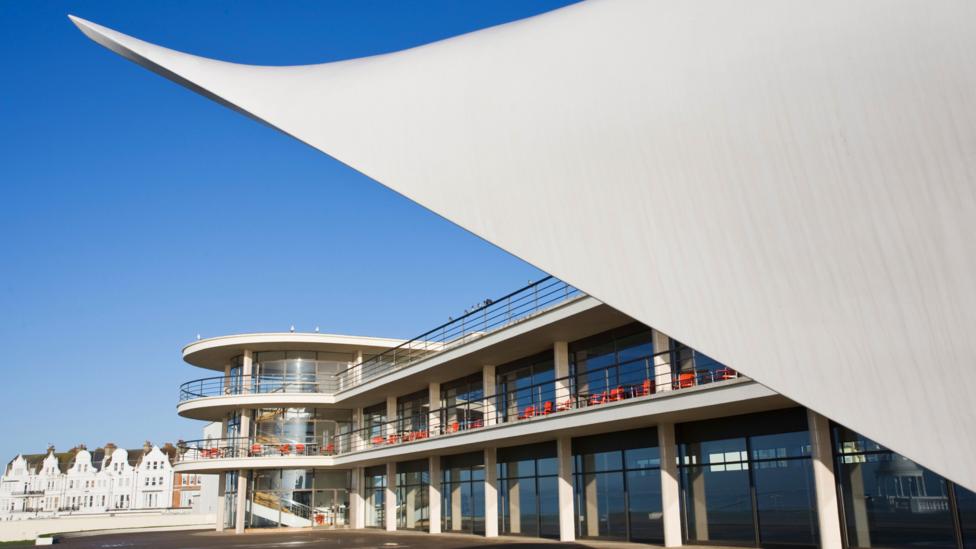 The influence of ocean-liner design can be seen in the clean lines of the elegant 1930s De la Warr Pavilion (Credit: Alamy)

By the 1930s, a new, highly mannered style of architecture and industrial design had emerged. Streamline Moderne, or Art Moderne, absorbed many of the mannerisms of liners, including horizontal ‘ribbon’ windows, smooth white stucco walls, flat roofs and curved facades. Logically enough, some examples, such as Raúl Reichard’s 1942 Normandie Hotel in Puerto Rico, stand near the sea. However, so popular was the style that it often sprang up inland – take Robert V Derrah’s 1939 Coca-Cola Building in Los Angeles.

The liner’s romantic associations remain irresistible to some architects today

The liner’s hyper-luxurious image persisted after the Second World War in Italy. Italian architect Gio Ponti designed parts of the interior of the Conte Grande – a 1920s liner refitted after the US had used it for military purposes in the War. The exhibition includes one of his sumptuous, mid-century chairs for its dining room.

Although liners were superseded by long-distance aircraft in the postwar years, their romantic associations remain irresistible to some architects today. 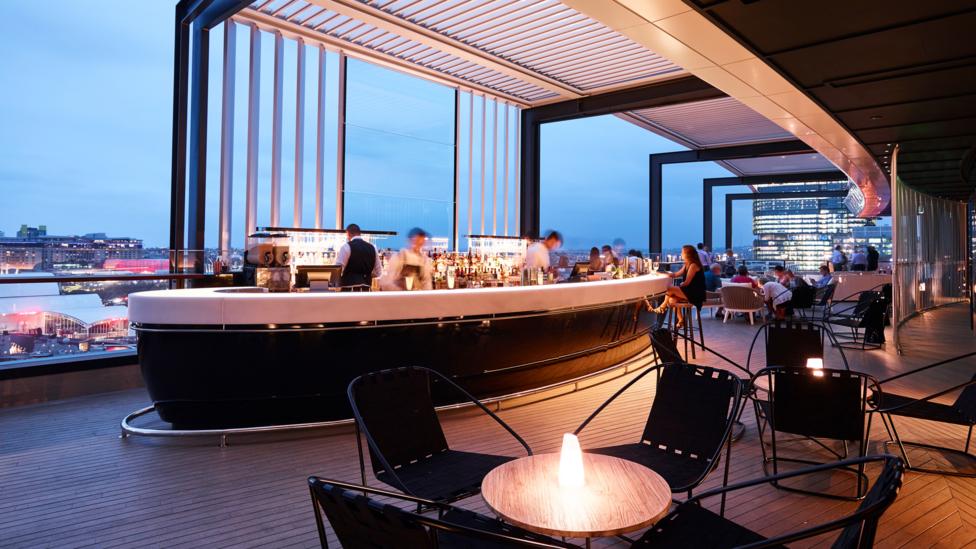 With its sweeping curves, the Zephyr roof-top bar is a contemporary interpretation of ocean-liner chic (Credit: Anson Smart)

In Australia, for example, Bates Smart has designed the new Regency Club at hotel Hyatt Regency Sydney, which, says Studio Director Brenton Smith, is inspired by “1930s liners – the quintessential image of luxury.”

In the UK, London practice Tonkin Liu’s residential project Ness Point in Devon, with its chalk-white, wavy facade channels both the White Cliffs of Dover, which it overlooks, and the marine-inspired, modernist, 1930s De La Warr Pavilion at Bexhill-on-Sea in East Sussex by Eric Mendelsohn and Serge Chermayeff. The new house stands on the same site as the owner’s old family home. “His father kept shipping manuals and a telescope to watch ships and see if they were crossing the ocean on time,” says its architect Mike Tonkin, one of whose own influences when he was younger was a bar in Bath called Luxury Liner. The London Mondrian hotel’s interior by Tom Dixon also echoes a liner’s sweeping curves and Deco touches. 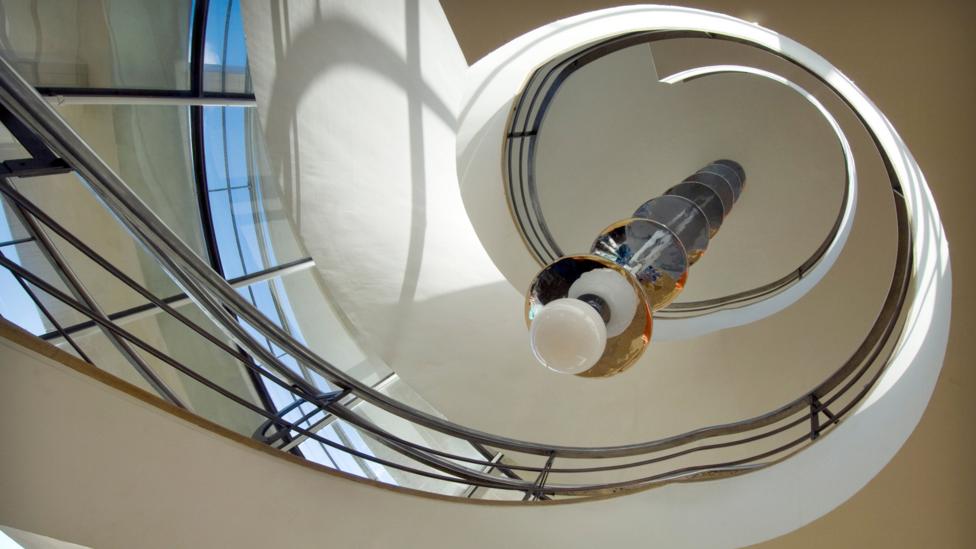 Another London home, remodelled by Paul Archer Design and now called Jimi House, has an all-white, liner-like interior featuring a staircase with a Le Corbusier-inspired handrail and a porthole-like window in the bathroom. According to its architect Emile Neumann, a fan of such British Streamline Moderne gems as Marine Court in St Leonards-on-Sea, by Kenneth Dalgleish and Roger K Pullen, the house’s owner loves to have a bath here, overlooking not the sea but her lushly planted garden.

Ocean Liners: Speed and Style is at the Victoria & Albert Museum from 3 February to 10 June.

designed
1Is this a new golden age of the train?
designed
2The invention of the ideal home
Around the BBC