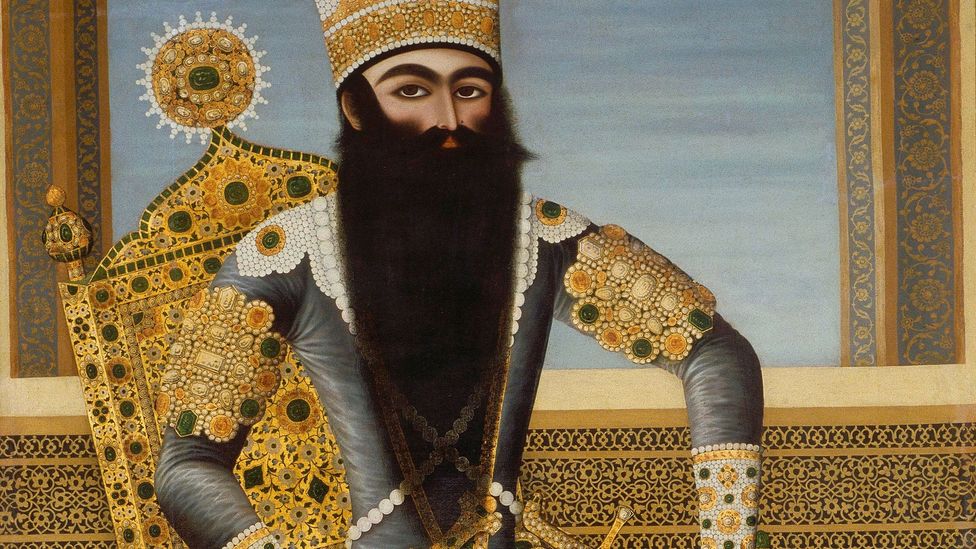 By Joobin Bekhrad 23rd March 2018
A landmark exhibition celebrates the often misunderstood art of Iran’s Qajar dynasty. It can tell us a lot about the country’s fascinating culture, writes Joobin Bekhrad.
A

Although indelibly illustrious, the millennia-long tale of Iran is, by and large, a sad one. Ravaged by invaders who threatened to put paid to its rich and ancient cultural heritage, razed to the ground by bloodthirsty warlords, perennially betrayed by its own children, and far too often the victim of foreign ploys, the ‘land of the noble’ has been to hell and back again, and then some.

The 19th Century was one of the darkest periods in Iran’s recent history. Ruled by sybaritic autocrats who sold Iran for a pittance to foreigners, and plagued by poverty, disease, ignorance, and an overall state of decrepitude and decay, Iran wasn’t exactly the place to be. Yet, as grim as the picture painted by travellers was, whether by Iranians or European diplomats, that depicted by the artists of the Qajar courts was truly a sight to behold. Sumptuous, iconic, and wholly novel, their artworks nearly have the potential to redeem the Qajars. 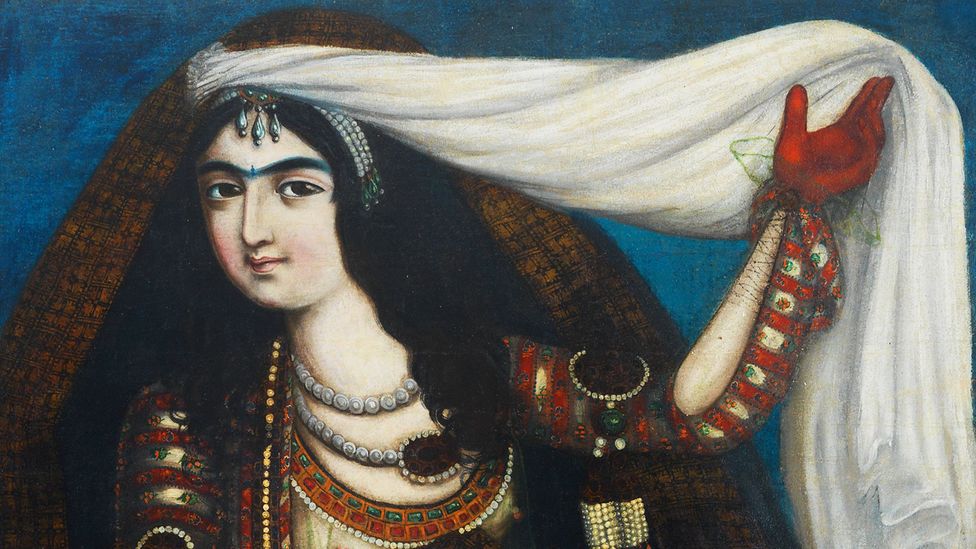 In contrast to the period’s dark history, the art of the courts was sumptuous and original (Credit: André Longchamp)

Nearly a century after the fall of Iran’s Qajar dynasty (which lasted from 1785 to 1925), and amidst the festivities of the two-week-long Iranian New Year (Norooz), a landmark exhibition at the Louvre Lens Museum in France, The Rose Empire, is showcasing masterpieces of Qajar art. “In France, we’d never had an exhibition of Qajar art before, so it will be the first one”, says curator Gwenaëlle Fellinger. What’s more, the exhibition’s interior and displays are the work of the fashion designer – and Qajar art lover – Christian Lacroix. “Qajar art belongs to these temporal spaces that have always fascinated me, between two worlds, two eras”, he tells BBC Culture. “The Qajar era is interesting … because of its East-meets-West/West-meets-East mixture of influences.” 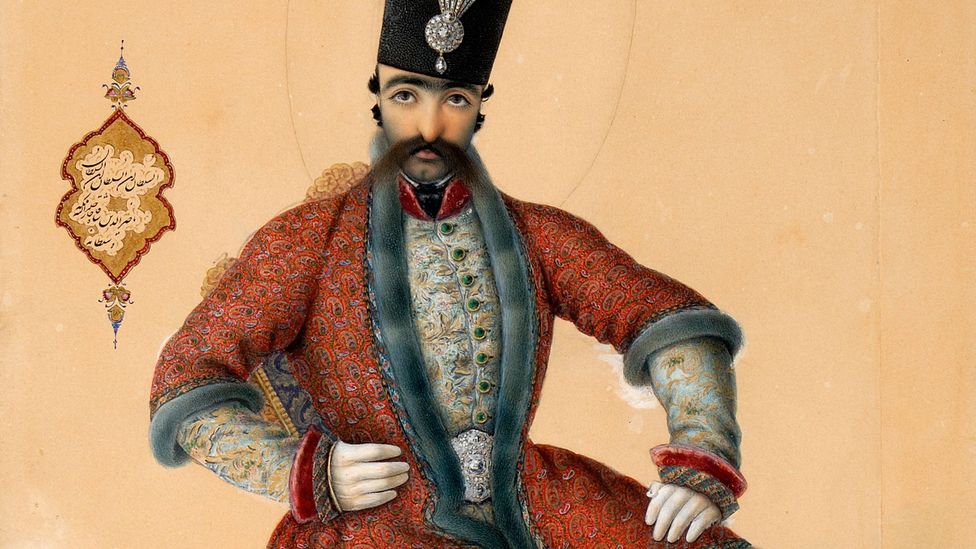 Nasir al-Din (also Nasseredin) is the most well-known of the Qajar monarchs (Credit: Musée du Louvre)

During the golden age of the Safavid shahs in the 17th Century, their capital Isfahan was the envy of all who visited it. The site of a major cultural renaissance and crossroads, and an inspiration to artists the world over, it is still referred to by its citizens as ‘half the world’. Things took a downward turn, however, after the death of the greatest ‘Sophy’ (as Shakespeare would have said) of them all, Shah Abbas the Great. By the time the last Safavid monarch, Abbas III, ascended the throne, the sun had set over Iran once again.

If the Safavids had ushered in an era of culture and exchange, and the Afsharids and Zands imperialism and peace, that of the Qajars was one of humiliation and depravity. The 18th and 19th Centuries saw Iran stripped of all its former splendour. Vying for power in the strategically important Iran, as well as elsewhere in Central Asia, the Russians and British continually encroached on Iran’s sovereignty.

Children were lucky not to die in their cribs, sickness often meant death, venality was what set wheels in motion, and ancient sites were used for target practice

With Iran being ruled by feckless and feeble monarchs, the job was all too easy for foreign conspirators; in fact, in some cases, they didn’t even have to lift a finger. To finance his over-the-top lifestyle, Nassereddin Shah – perhaps the most well-known Qajar monarch – gave a single British baron control over all of Iran’s roads, telegraphs, railways, mills, factories, and most of its natural resources; and another, a monopoly on Iran’s tobacco industry. Foreign intrigue aside, Iran was in a pitiful state. Travellers to the country wrote about the lack of proper infrastructure, hideous living conditions, extreme debauchery (drunken orgies and the like), and corruption. 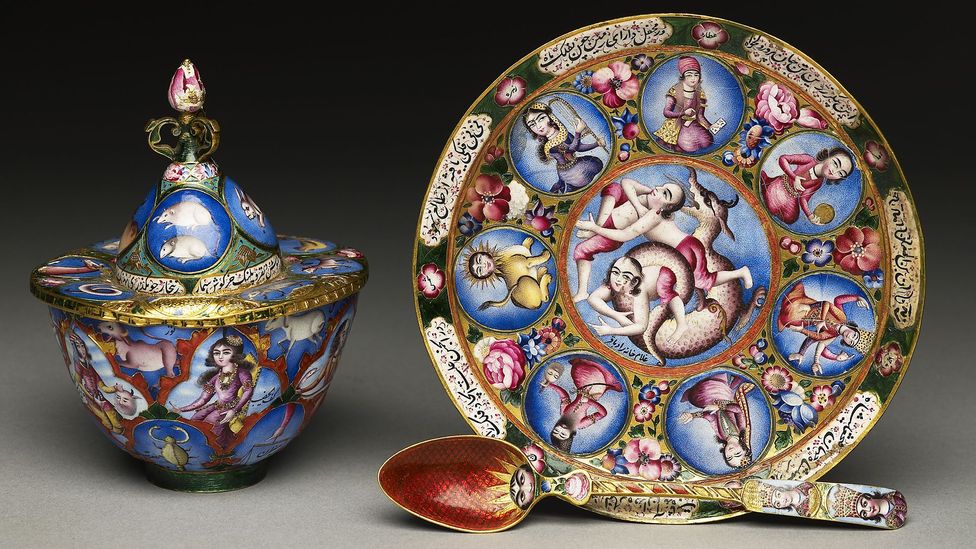 Some consider art of the Qajar era to be kitsch and over-the-top (Credit: Ashmolean Museum, University of Oxford)

The story at the imperial courts, however, was another matter. Expanding on new forms of aesthetics in painting that were introduced in the Afsharid, Zand, and even late Safavid periods, which broke out of the framework of two-dimensional Persian miniatures, artists at the Qajar courts created a visual vocabulary wholly their own. Bedecked in towering crowns topped with aigrettes, glittering brassards, and vivacious robes, and sporting outlandish beards and moustaches, Qajar monarchs like Fat’h Ali Shah, Mohammad Shah, and Nassereddin Shah appeared larger than life, and as works of art in and of themselves.

Courtly paintings and photographs depicted a dazzling wonderland of colour, passion, and every jewel under the sun 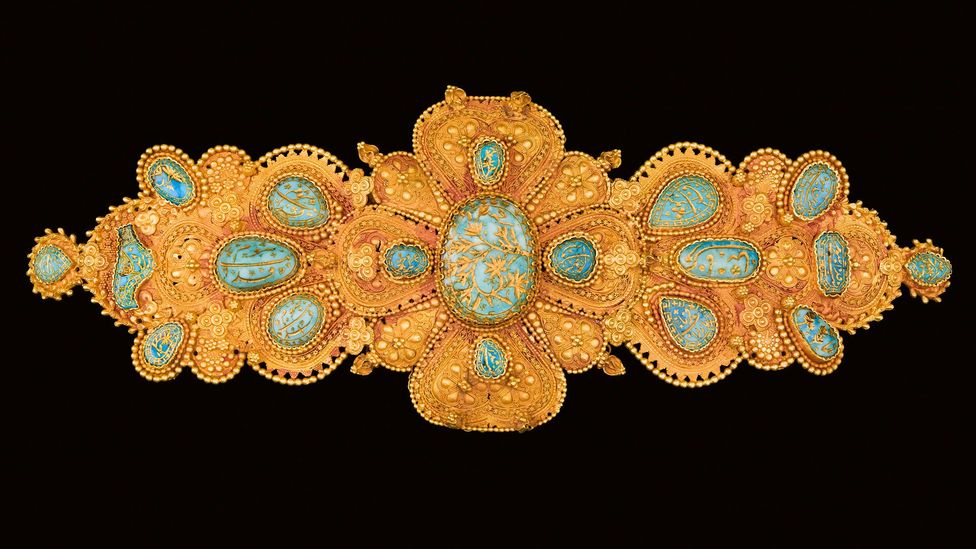 The Rose Empire exhibition has borrowed works from over 400 museums and private collections – including this ornate buckle (Credit: Museum of Islamic Art, Doha/Samar Kassab)

Elsewhere, Nassereddin Shah, obsessed with all things European and keen to introduce ‘modern’ ways to his country, toyed with photography in his spare time; Antoin Sevruguin captured the lives of the rich, the poor, and the downright wretched on celluloid; and painters like Kamal ol-Molk artfully blended together European and Iranian imagery. In contrast to French and British magazines of the day, which often portrayed the shahs as spineless and degenerate, and Iran as a Persian cat made the plaything of a British lion and Russian bear, courtly paintings and photographs depicted a dazzling wonderland of colour, passion, and every jewel under the sun in which the Shah, ‘God’s Shadow on Earth’, reigned supreme.

The age of opulence

The art of the Qajar era has long been admired by artists and scholars, says Christian Lacroix. “[Its] opulent elegance impressed [fashion photographer] Louise Dahl-Wolfe … She was inspired by Qajar portraits for a famous shooting session – and one of my favourite fashion features ever.” Yet, Qajar art has also been misunderstood and overlooked by many.

“In France, Qajar art is looked down on,” says Fellinger. “People usually say it’s kind of kitsch. The problem is that it’s totally unknown, and the objects seen in auctions are not really of the best quality.” Indeed, a desire to acquaint French audiences with the richness of Qajar art is the driving force behind The Rose Empire, a first for France, and the first major survey of Qajar art since 1998’s Royal Persian Paintings, held at the Brooklyn Museum in New York and the Brunei Gallery at London’s School of Oriental and African Studies (SOAS). 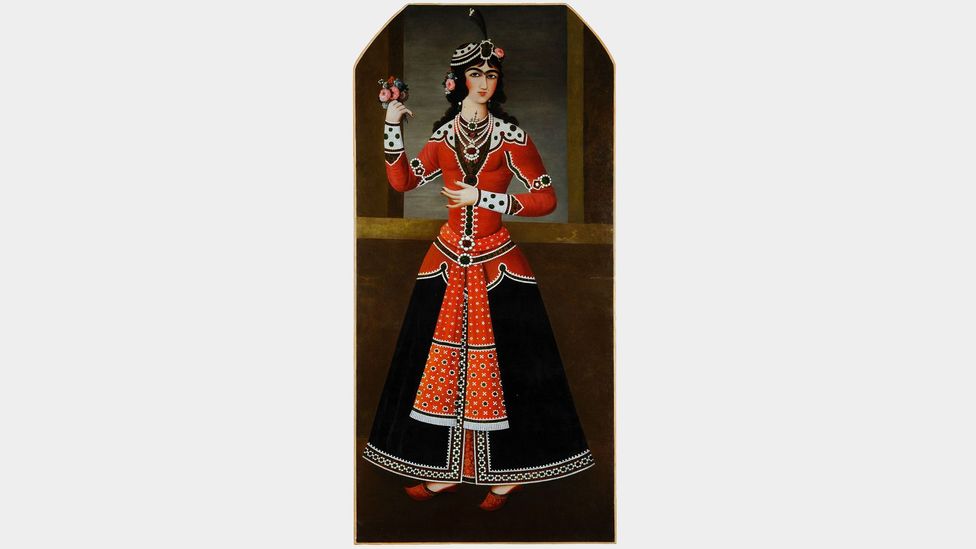 Boasting over 400 works from museums and private collections around the world, some of which have never been seen before in Europe, the exhibition focuses on the art of the courts, and goes beyond paintings to also include carpets, textiles, ceramics, and metalwork. Amongst these, Fellinger is particularly excited about the lacquerwork and enamels as well as life-size paintings from the Golestan Museum reputed to have been lost. Lacroix, on the other hand, has a special fondness for the carpets and portraits on display, particularly those of Nassereddin Shah and “the musicians laden with pearl jewels [and] precious shimmering costumes.” And, while there is a room dedicated to religious-inspired art, Fellinger notes that one shouldn’t be quick to call Qajar art ‘Islamic’ – as it and Iranian art in general often are – and that the term itself is fraught with issues. “[Islamic art] is a totally an Occidental definition, of course … The problem with it is that it includes everything, from Spain to India … The only link is the religion … It’s a civilisational term that is quite easy.” 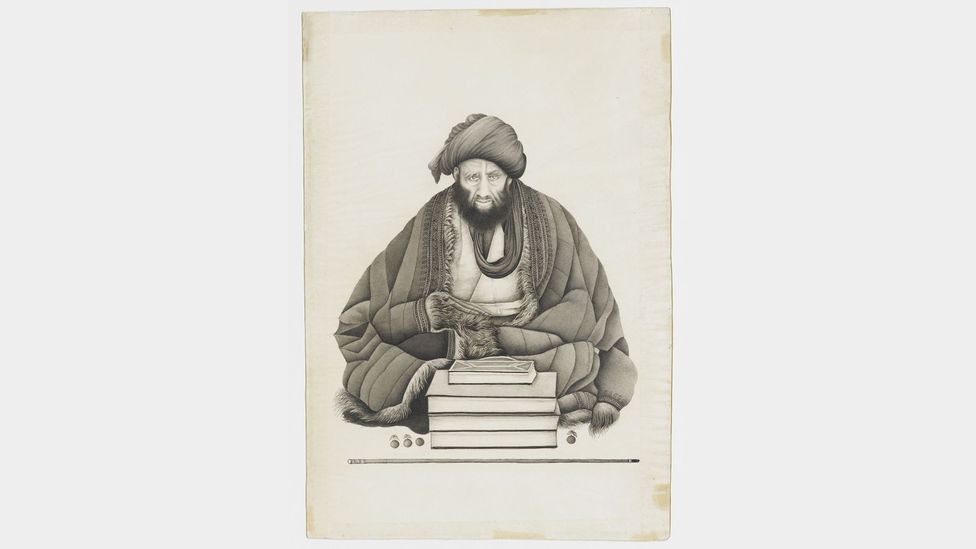 The exhibition has a room dedicated to religious-inspired works, although Qajar-era art includes much more (Credit: Musée du Louvre)

Just as the exhibition doesn’t limit itself to narrow interpretations of Iranian art, it also goes beyond the Qajars to serve as a sort of introduction to the richness and exuberance of Iranian art and culture as a whole, as well as a catalyst for intercultural dialogue. “In a period like the one we live in politically, economically, and diplomatically, culture from this part of the world is important to be shown in this part of Europe for a better understanding,” says Lacroix. “Even during the Pahlavi era … Iran and France seemed unable to understand each other, and the gap is [getting] deeper and deeper each day with events in the Middle East …” Likewise, Fellinger, noting the negative way Iran is often portrayed in Europe, says, “The point is also to prove that there is a really interesting culture.”

Despite the decades of darkness the Qajar monarchs brought to Iran, the splendour of Iranian art and culture continued to shine in full force; and now, centuries later, the dazzling masterpieces of that era’s artists are not only as radiant as ever, but are also being used to foster understanding and appreciation of an ancient and much-misunderstood civilisation. Should we be surprised? Not according to Lacroix. “Art is the best link, always.”