Loading
Architecture
Saddam's ‘Disney for a despot’: How dictators exploit ruins
Share using EmailShare on TwitterShare on FacebookShare on Linkedin 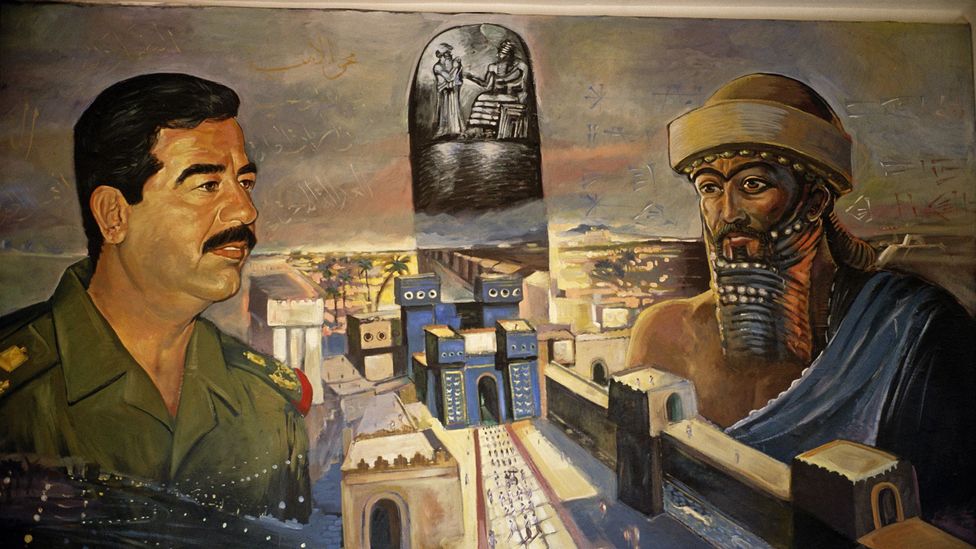 The palace looms on the horizon, all angular facades and gaping windows, almost too bright to look at in the baking Iraqi sun. It’s a short drive up the spiral road to the top, the loose scree overgrown with olive trees and palms burst free of the once-luxurious gardens.

This was once one of Saddam Hussein’s most opulent palaces. Inside, you can see the traces of its finery, the exquisitely carved mantles and doorways, the grand chandelier still hanging in the entrance hall. But now the walls are spattered with graffiti, and local kids play football in the echoing space. Glass beads from the chandelier scatter the floor, and the palace of the once all-powerful dictator has become an empty ruin. If you walk out onto the balcony of the dictator’s bedroom, the plains stretch out before you, and another ruin fills your view: the sprawling mass of broken walls and ancient architecture that shows where 2,500 years before, the city of Babylon once ruled the world. 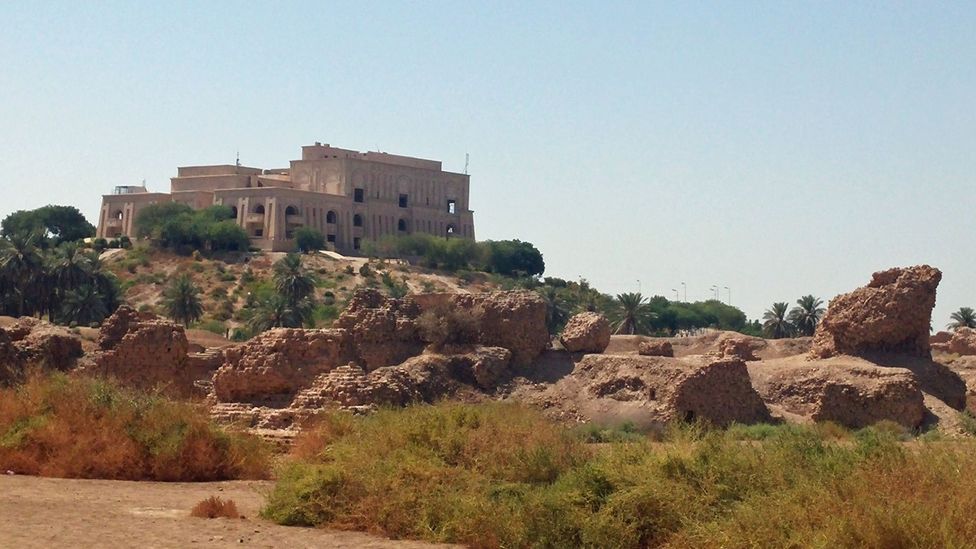 Built in the style of a ziggurat, Saddam Hussein’s palace overlooking the ruins of Babylon was large enough to cover five football pitches (Credit: Paul Cooper)

This striking view is no coincidence. Visitors to this palace were supposed to look out over the ruins of Babylon and make the connection that they were standing in the presence of a great ruler whose legacy would last for millennia.  Saddam isn’t the first dictator to have used ancient ruins in this way. In fact, the link between idealisation of ancient ruins and totalitarian rulers has a long history. This is because ruins are never just what they seem: a collection of walls crumbling into the sand. They are repositories of memory and myth in equal measure. They help construct fascist narratives of past greatness lost to modern decadence and argue for the tyrannies of the past to be reconstructed in the modern age. Such appropriation of ruins often jeopardises them too – and with the destruction of the ancient sites at Palmyra by the so-called Islamic State such a recent blow, it’s worth remembering that the efforts of Saddam, and before him Mussolini and Hitler, to ‘preserve’ ruins often stripped them of context – including other legacies that didn’t fit with the message of the state.

Iraq today has one of the world’s richest archaeological heritages. The Tigris-Euphrates valley that forms the country’s spine holds the ruins of some the world’s first cities: Uruk, Ur, Babylon and Nineveh among them. These ruins were long plumbed and plundered by colonial powers, their artefacts taken away to furnish foreign museums. In the 19th Century, the Assyrian carvings of Nineveh were taken to the British Museum, and the Ishtar Gate of Babylon was stripped of its tiles and reconstructed in the Pergamon Museum in Berlin. But after seizing Iraq’s presidency, Saddam determined to use them for another purpose: to build a cult of Iraqi supremacy, with him at its head. 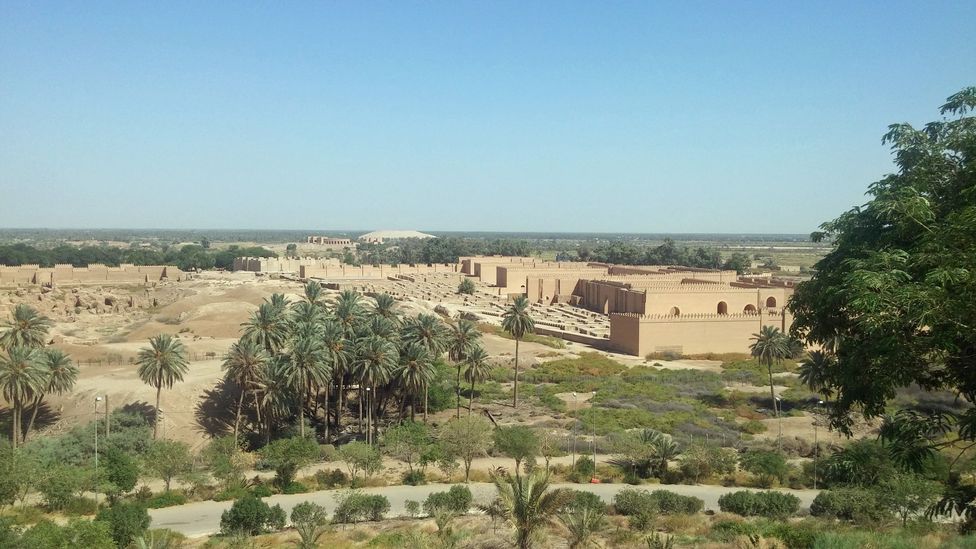 You could look out from the former Iraqi leader’s bedroom and see this view of the remains of Babylon (Credit: Paul Cooper)

For this plan to work, archaeology would be of supreme importance. Indeed, Iraq’s archaeologists were one of the first groups that Saddam met with after coming to power in 1968.

“The antiquities… are the dearest relics the Iraqis have,” he reportedly told those at the meeting. These relics, he said, “show the world that our country… is the [offspring] of the previous civilisations that have greatly contributed to mankind.” 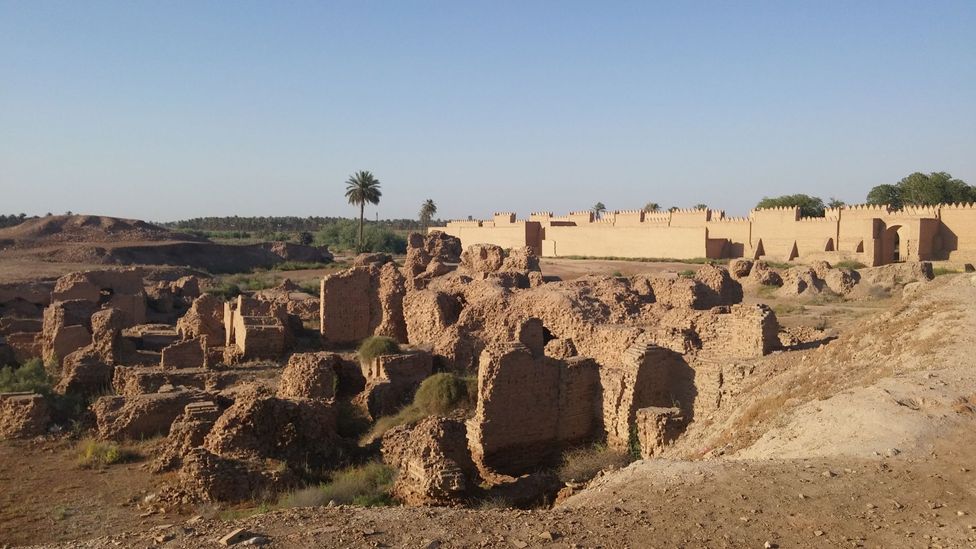 Saddam built monumental new walls over and around the ruins of Babylon, ostensibly as an act of restoration – in reality, it was destructive to the site (Credit: Paul Cooper)

In the decade after Saddam’s Ba’ath Party seized power in Iraq, the budget for the Iraqi Department of Antiquities increased by more than 80%. The archaeological sites of Nineveh, Hatra, Nimrud, Ur, ‘Aqar Quf, Samarra and Ctesiphon all underwent heavy reconstruction. But for Saddam, the jewel in Iraq’s crown was always Babylon.

Babylon was one of the world’s greatest cities from the 18th to the 6th Century BCE. It was the largest city in the world at two points in history, and perhaps the first city to extend beyond 200,000 inhabitants. It was occupied by Alexander the Great in the 4th Century BCE, and briefly flourished before it was emptied in the wars following his rule. After the 7th-Century Muslim conquest of Arabia, travellers visiting the area describe only ruins. 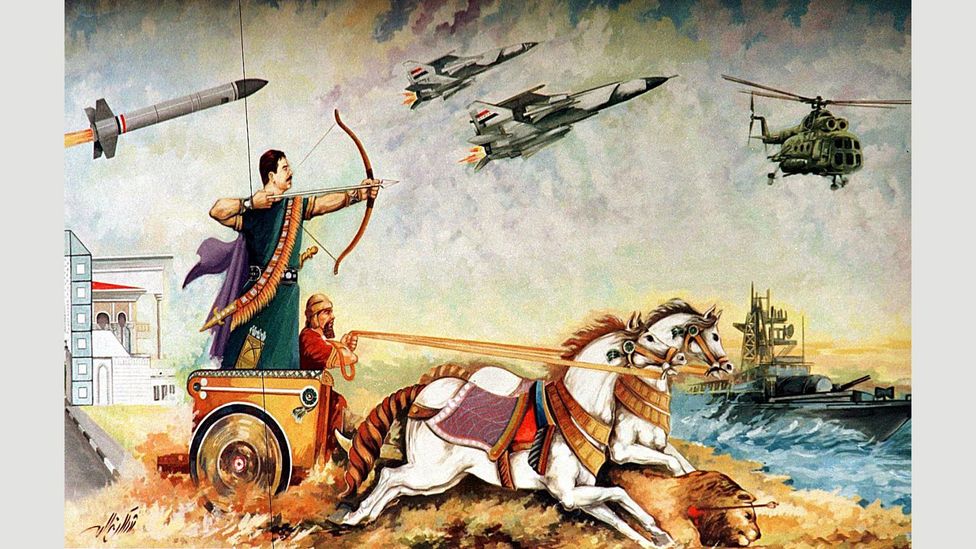 Determined to establish a link between his rule and that of the ancient Babylonians, Saddam Hussein commissioned this mural of himself in a chariot (Credit: Getty Images)

For Saddam, the ruined city of Babylon had always held a special fascination. He ordered an ambitious reconstruction of the city’s walls, costing millions of dollars at the height of the Iran-Iraq War. And he raised the walls to a historically-improbable 11.5m (38ft) high, drawing criticism from the international archaeological community, who accused him of turning Babylon into ‘Disney for a despot’. As a finishing touch, Saddam built an anachronistic Roman-style theatre in the ruins. When archaeologists told him that ancient kings like Nebuchadnezzar had stamped their names on Babylon’s bricks, Saddam insisted that his own name be stamped on the modern bricks used in the reconstruction. These efforts were later described by Provisional Coalition Leader Paul Bremer, who was the envoy to the new Iraqi government following Saddam’s fall in 2003, as “a travesty… ersatz monstrosities”. 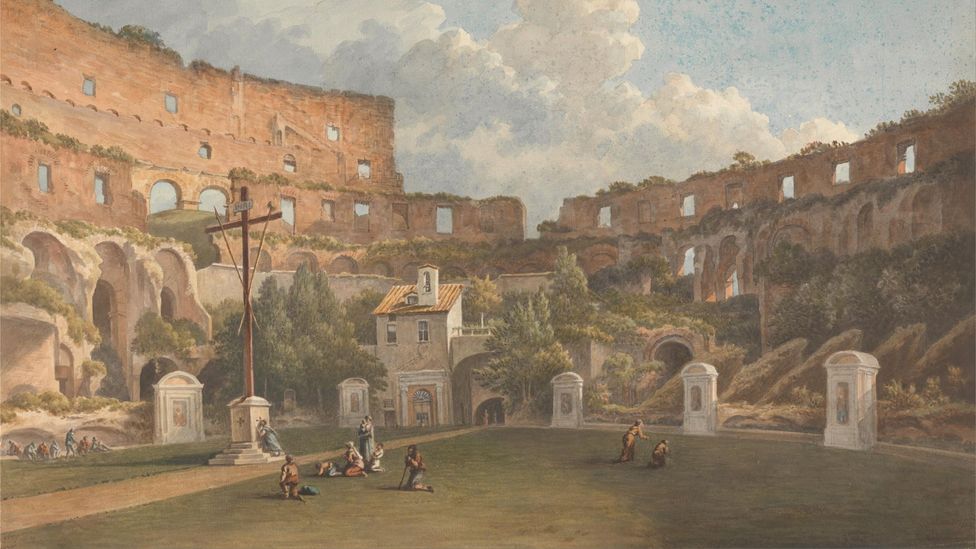 John Warwick Smith painted the Colosseum’s interior as it looked in the early 19th Century with its lush greenery flourishing and new buildings that had been added (Credit: Alamy)

For the theatre of totalitarian rule, the ancient ruins were an indispensable backdrop. In 1981, Babylon was where celebrations took place to commemorate the first anniversary of the Iraqi invasion of Iran, with officials using the slogan, Nebuchadnasar al-ams Saddam Hussein al-yawm (yesterday Nebuchadnezzar, today Saddam Hussein). At one point, Saddam built a giant plywood model of himself standing over the Ishtar Gate in Baghdad, and in the 1988 festival, an actor representing Nebuchadnezzar handed a banner to the Iraqi Minister of Culture, declaring Saddam Hussein to be Nebuchadnezzar’s grandson and “flagbearer of the Twin Rivers.”

Saddam simply followed Mussolini’s blueprint. In Italy at the start of the 20th Century, the self-proclaimed Il Duce saw the ruins of Rome as an especially powerful instrument. While previous governments had also claimed to be the inheritors of ancient Rome, Mussolini’s Fascists took this idealisation to a new level. Mussolini himself was frequently described in propaganda dispatches as “a new Augustus”, evoking the Roman Emperor who rebuilt much of the city during his reign. 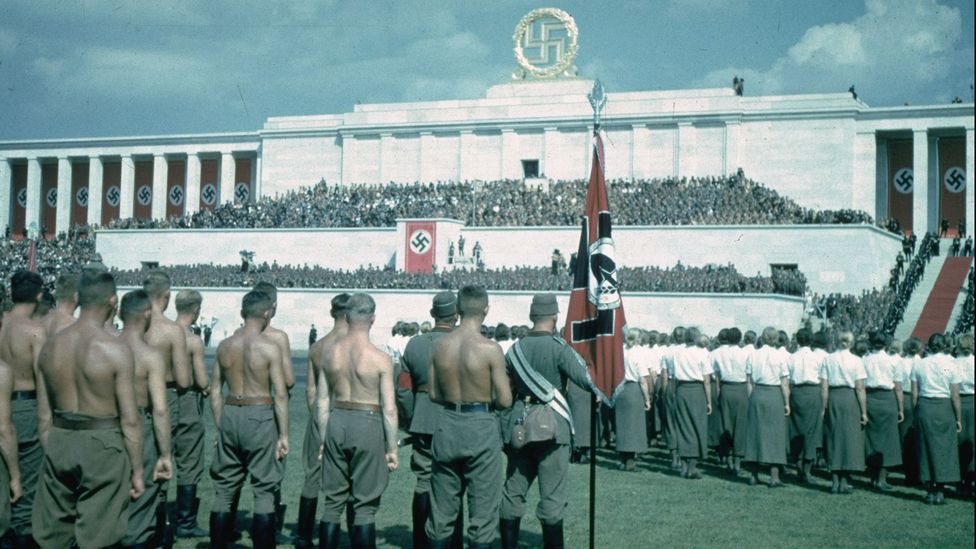 “Rome is our point of departure and reference,” Mussolini told a crowd at the Birthday of Rome Celebration in 1922, shortly after taking power. “It is our symbol or, if you wish, our myth. We dream of a Roman Italy, that is wise and strong, disciplined and imperial. Much of what was the immortal spirit of Rome, resurges in Fascism.”

But the Fascists encountered a problem: since ancient times, Rome had grown and covered its ruins, absorbing them into the fabric of the ever-changing city. People lived among the crumbling capitals and pillars, built their houses against them and took stones for their own building projects. Whole districts had grown up by covering the ruins and obscuring the legacy that the Fascists depended on. 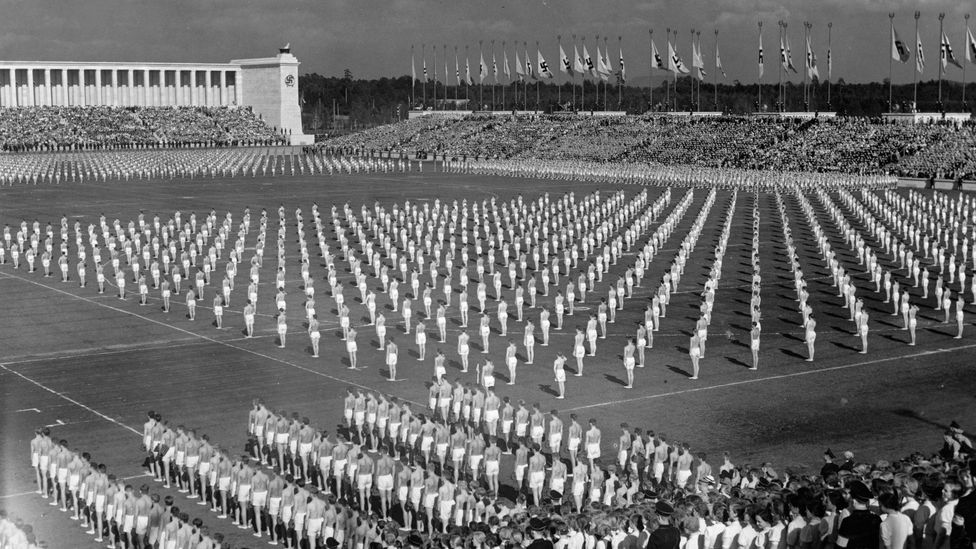 The Nazi parade grounds in Nuremberg were meant to be imposing enough to suggest the Third Reich would last as long as the Roman Empire (Credit: Getty Images)

To solve this problem, Mussolini ordered grand excavations, clearing away houses and whole districts, relocating the populations that lived there. He excavated the mausoleum of Augustus, building a Fascist piazza around it, cleared the buildings that clustered around the Theatre of Marcellus and also dug up the floor of the Colosseum’s Arena, exposing the hypogeum beneath and stripping it of its once verdant plant life.

In May 1938, only 16 months before the outbreak of World War Two, Hitler visited Rome. During his visit, Mussolini showed the German dictator a transformed Italian capital, its ruins exposed and finalised. Hitler toured the city at night, and Mussolini’s technicians lit the newly-exposed ruins with red flares so they stood out more prominently than the modern buildings around them. The tour passed all of the most significant ruins of Rome, ending at a brightly-lit Colosseum.

Germany’s Führer was as impressed as Mussolini had hoped. But Hitler had always been fascinated by ruins. A painting of the Roman Forum by the 18th-Century French artist Hubert Robert already hung on the wall of Hitler’s office at the Reichstag, and he had painted many ruins during his career as a painter. Hitler had often expressed his hatred of modern architecture and his love for the classical architecture of ancient Rome. “If Berlin were to meet the fate of Rome,” Hitler fretted in 1925, “the coming generations could one day admire only the department stores of Jews and the hotels of some corporations as the most imposing works of our time, the characteristic expression of the culture of our days.”

For Hitler, the ruins of the past pointed to an idealised version of history, one he hoped to emulate in his Third Reich. “Hitler liked to say that the purpose of his building was to transmit his time and its spirit to posterity,” the Third Reich’s chief architect Albert Speer recalled in his memoirs. “Ultimately, all that remained to remind men of the great epochs of history was their monumental architecture,” he remarked. “What then remained of the emperors of the Roman Empire? What would still give evidence of them today, if not their buildings […] So, today the buildings of the Roman Empire could enable Mussolini to refer to the heroic spirit of Rome when he wanted to inspire his people with the idea of a modern imperium.”

In response to this anxiety, Hitler and Speer devised the theory of Ruinenwert, or ‘Ruin Value’. The idea was to create architecture that would leave, even in its decaying state, an inspirational example to future generations. This philosophy of architecture is visible in grand architectural projects like Speer’s Zeppelin Field grandstand at Nuremberg, which was based on the ancient Pergamon Altar still on display in the same museum as the Ishtar Gate of Babylon.

Ultimately, the buildings the Nazis built would never leave behind monumental ruins. Like Saddam’s palace at Babylon, when Speer's buildings were destroyed only a few years later, they were reduced to crumbling rubble just as he feared.