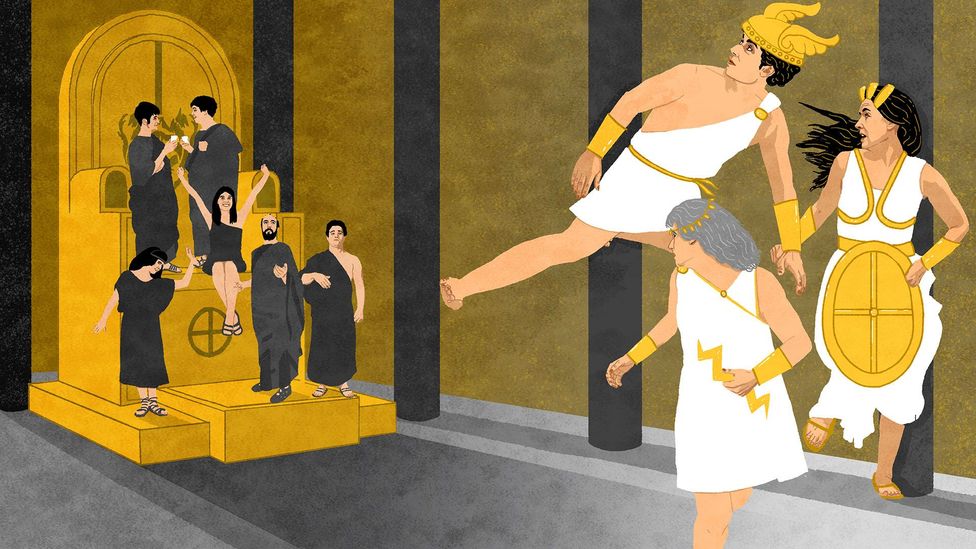 By Caroline Alexander 27th April 2018
For the second in our Stories that shaped the world series, Caroline Alexander explores how Homer’s Iliad helped redefine the way we worship – and what the epic poem of ancient Greece can still tell us about war.
E

Early in the Iliad, Homer’s epic poem about the legendary Trojan War, there occurs a famous digression known as the catalogue of ships, which names all the Greek leaders and contingents who came to fight at Troy. Before unfolding this impressive muster roll, Homer makes a special, public appeal to the Muses to ensure he gets the facts right:

Tell me now, Muses, who have your homes on Olympus –
for you are goddesses, and ever-present, and know all things,
and we hear only rumour, nor do we know anything – .

These verses reflect a central claim of epic poetry – that through the inspiration of the Muses, daughters of Memory, it can preserve the knowledge of people and the events of the past – a formidable power in the non-literate, oral cultures in which the Iliad evolved. The Iliad was composed around 750-700 BC, but its origins lie at least some five centuries earlier, deep in the Mycenaean Bronze Age – the world the Iliad poetically evokes.

The Mycenaeans themselves knew of writing, but appear to have used it only for bureaucratic bookkeeping in their palace states. When their kingdoms collapsed around 1200 BC, even this limited use was lost. Thus from the end of the Mycenaean Age until the age of Homer, poets who performed and adapted the epic orally kept the tradition alive, and carried memory of the Mycenaean world into new ages. 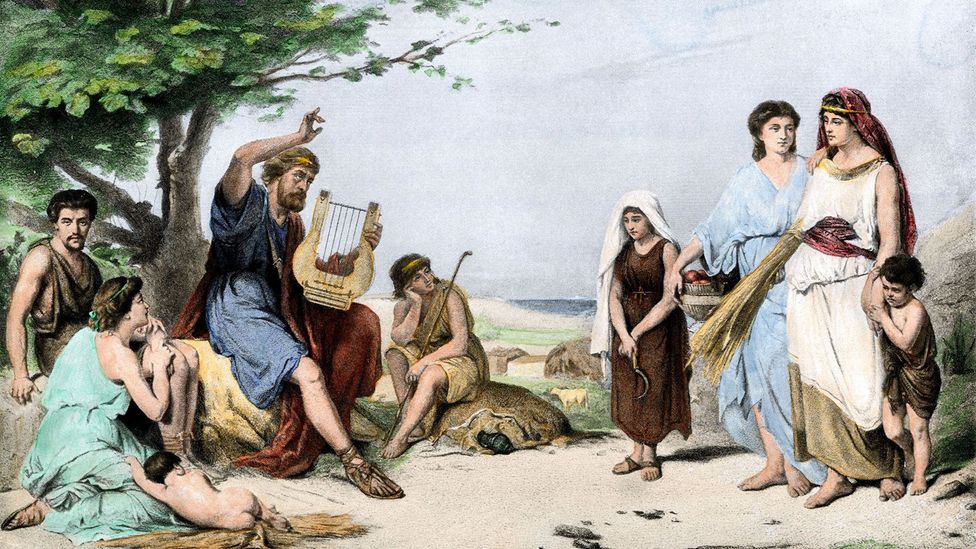 Oral storytelling was a way of preserving memory and knowledge for centuries (Credit: Alamy)

The Iliad is keenly aware of its role as the keeper of memory, and credibility is central to its storytelling

The Iliad is keenly aware of its role as the keeper of memory, and credibility is central to its storytelling. The epic is a work of fiction, and relates the events of a few weeks in the tenth and final year of the Trojan War fought between Greeks and Trojans over beautiful Helen, the Greek queen who deserted her husband to elope with a Trojan prince. Its cast of characters includes not only warriors and their captives and families, but the immortal Olympian gods, who perform many supernatural acts in the course of their eager participation in the action around Troy.

Yet despite such unabashed acts of divine magic, the epic works hard to be realistic. The famous Homeric similes, for example, evoke the familiar, verifiable, natural world. The description of battle tactics and wounds are similarly believable (if not wholly anatomically accurate), as is the careful description of landmarks of the Troad, the region around Troy.

The epic’s poetic meter, the dactylic hexameter, allows expressions of rage, indignation, bravado, remorse, and grief to ebb and flow in natural cadence

Above all, Homer’s characterisation of the epic’s main players is wholly and consistently believable, achieved through the characters’ own words – their speeches – which account for over half of the Iliad’s 15,693 lines of verse. The epic’s poetic meter, the dactylic hexameter, is ideally suited to the Greek language, allowing expressions of rage, indignation, bravado, remorse, and grief to ebb and flow in natural cadence.

The Iliad has the reputation of being an exclusively masculine epic, weak on female characters, but – to choose only one contending example – Homer’s nuanced characterisation of Helen as a woman driven by reluctant, remorseful passion is as hauntingly credible as any Anna Karenina. 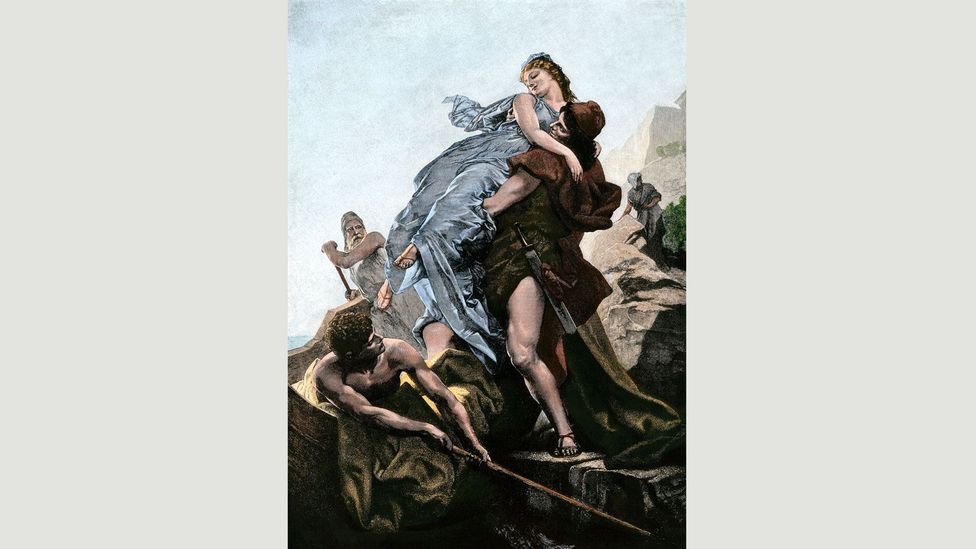 In Greek mythology Helen – the wife of the Spartan king – fled with Paris, son of Priam, King of Troy, starting the Trojan War (Credit: Alamy)

When the so-called Dark Age ended, and literacy returned to Greece around 750 BC, Homer, in some form or fashion, eventually wrote down the epic. Now, the heroic story from the vanished Mycenaean world went viral. Not only did its characters, mortal and divine, inspire art and other literature, but they were believed to have been real. The Trojan War really happened: Thucydides, writing in the 5th Century BC, matter-of-factly claimed that the war’s long duration had led to the destabilisation of Greek states at the end of the Dark Age.

Most significantly, the Iliad changed the way people worshipped

Most significantly, the Iliad changed the way people worshipped. According to the 5th-Century historian Herodotus, it was Homer, with the poet Hesiod, who “described the gods for the Greeks”, and who also gave them human characters – the characters that shape the Olympian gods we recognise today. At the same time, people established cults to the Iliad’s human heroes, adopting them as their heroic ancestors. Belonging to the Iliad, possessing history informed by the Iliad, became cornerstones of ‘Greekness’, and of Greek identity. 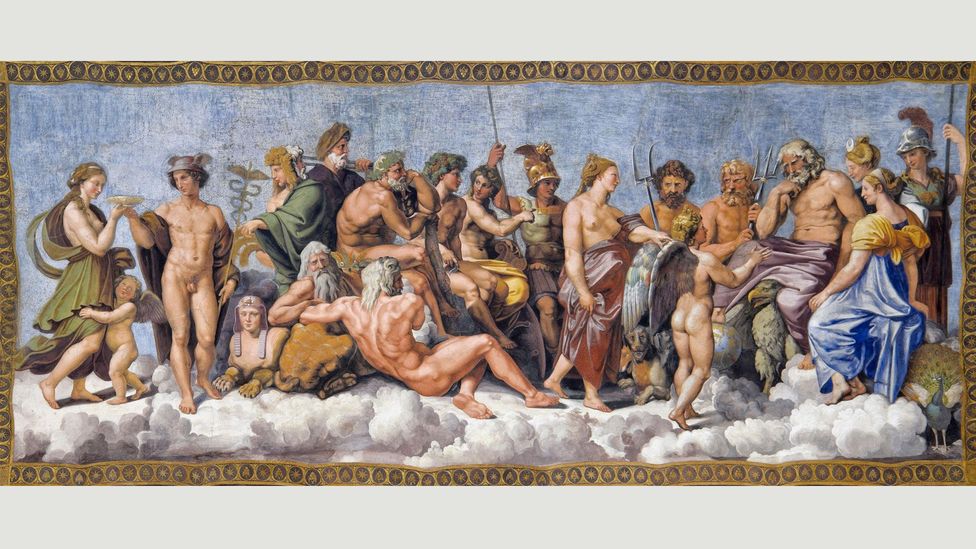 According to Herodutus, Homer “gave the gods their names, and determined their spheres and functions, and described their outward forms” (Credit: Alamy)

In these ways the Iliad directed not only the course of the arts, but of social history. Less quantifiable, and also more profoundly haunting, were the ways in which the Iliad compelled its audiences, down to the present time, to confront such bedrock facts of human experience as mortality and morality – the difficult, dark regions that lie at the nexus of identity and religion.

What I grope to express, Homer repeatedly makes clear, and most sublimely so in the famous scene towards the end of the Iliad, in which King Priam comes through the night to the Greek camp as suppliant to Achilles. Both men have supplicated the Olympian gods at different times in the epic, and had their prayers denied. Now Priam’s mission is to beg for the body of his beloved son, Hector, whom Achilles killed to avenge the death of his own companion, Patroclus. At Achilles’ knees, Priam supplicates:

“Revere the gods, Achilles, and have pity upon me,
remembering your father; for I am yet more pitiful,
and have endured such things as no other mortal man upon the earth,
drawing to my lips the hands of the man who killed my son.”
So Priam spoke; and he stirred in the other a yearning to weep for his own father,
and taking hold of his hand he gently pushed the old man away.
And the two remembered, the one weeping without cessation for
man-slaughtering Hector as he lay curled before Achilles’ feet,
and Achilles wept for his own father, and then again for
Patroclus; and the sound of their lament was raised throughout the hall.

The power of this scene derives not just from storytelling genius, but from the Iliad’s attentiveness to its own history. The epic tradition originated in mainland Greece, most likely in the northern region of Thessaly, but following the collapse of the Bronze Age civilisations, migrated with poets travelling eastwards to the island of Lesbos and the northwest coast of Anatolia (now Turkey), including the region around Troy: this we know from linguistic studies, archaeology, and ancient accounts.

One of our Iliad’s most striking characteristics is its sympathetic treatment of the Trojans, who are portrayed as fellow victims of the war, not merely enemies

In its earliest form, then, the Iliad was likely performed before mostly Greek audiences, but closer to Homer’s time the audience was also Anatolian, most likely with Trojan sympathies. The poets adapted accordingly and one of our Iliad’s most striking characteristics is its consistent sympathetic treatment of the Trojans, who are portrayed as fellow victims of the war, not merely enemies. 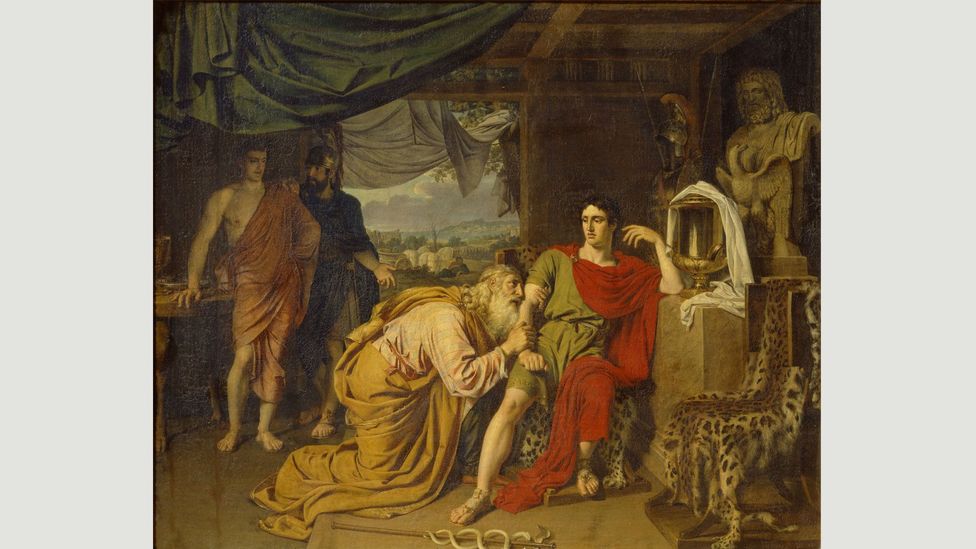 The image of Priam begging Achilles for his son Hector’s body has appeared in many artworks – including this 1824 painting by Alexander Andreyevich Ivanov (Credit: Alamy)

What if, all those centuries back, Greek poets performing in Anatolia had declined to adapt their Greek epic to the sensibilities of their changing audiences? What if they had been deaf to the ongoing history of war and displacement they encountered? What if Homer had Achilles send old Priam packing; abuse, humiliate or kill him? Would history really have turned out differently? Probably not; but something of consequence would have been lost to the world. Not just a monumental scene in a great, enduring story, but a seminal statement about humanity – made palpable thanks to the dogged realism of the epic’s long tradition.

Longinus, a scholar in the 1st Century AD, wrote “that in recording as he does the wounding of the gods, their quarrels, vengeance, tears, imprisonment, and all their manifold passions Homer has done his best to make the men in the Iliad gods and gods men.” The scene between Achilles and Priam displays this inversion, and crystallises what the Iliad poets had learned in the course of the epic’s journey. That the gods we worship might not answer, and on occasion humanity must rise to fill their place. That glory is inextricably allied to wrenching loss. That the victor shares the humanity of the most vulnerable of the vanquished; that there is no such thing as unalloyed victory in war.

Caroline Alexander was the first woman to publish a full-length English translation of The Iliad (Penguin, 2015).