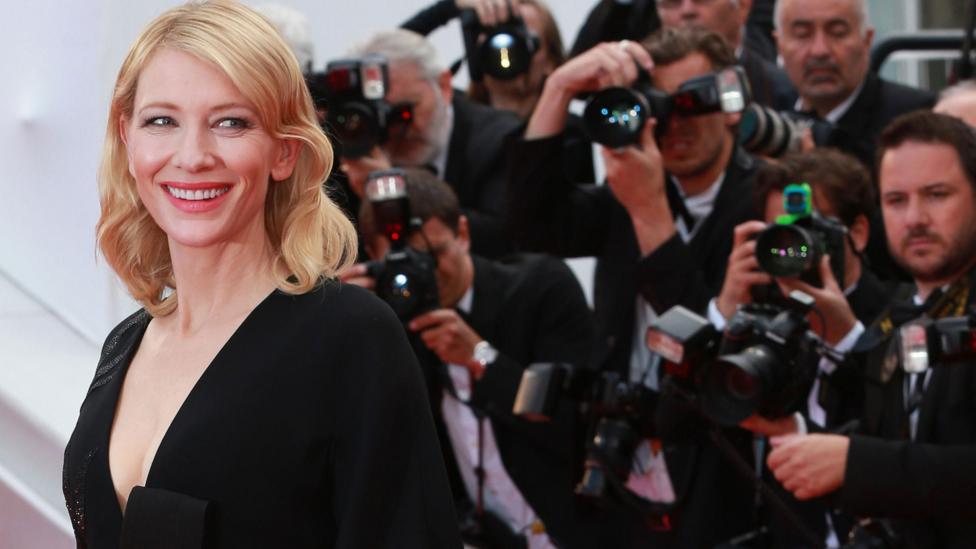 By Miriam Quick 9th May 2018
The Cannes Film Festival has been criticised for its gender imbalance – but what’s the real story? Data journalist Miriam Quick takes a look at the numbers.
O

Only one female director – Jane Campion – has ever won the Palme d’Or, the top film at the Cannes Film Festival, a fact she calls ‘insane’. And in 2017, Sofia Coppola became only the second woman ever to win the best director prize, for The Beguiled.

The most prestigious and grandest of film festivals, which celebrates its 71st year this week, is showing it has taken criticisms on board with a diverse, gender-balanced jury of four men and five women, including Cate Blanchett, who is president, Twilight Saga star Kristen Stewart and French actress Léa Seydoux. (Seydoux has the unusual distinction of having won a Palme d’Or as a non-director for her role in Blue is the Warmest Colour, sharing the prize with co-star Adèle Exarchopoulos and director Abdellatif Kechiche in 2013.)

Only one woman has ever won an Oscar for best director, Kathryn Bigelow for The Hurt Locker in 2009

When it comes to the films, though, things don’t look so equal. Three out of 21 directors in the running for the 2018 Palme d’Or are female: Eva Husson for Girls of the Sun, Nadine Labaki for Capernaum, and Alice Rohrwacher for Lazzaro Felice. Let’s say that again: three out of 21. Men outnumber women six to one. 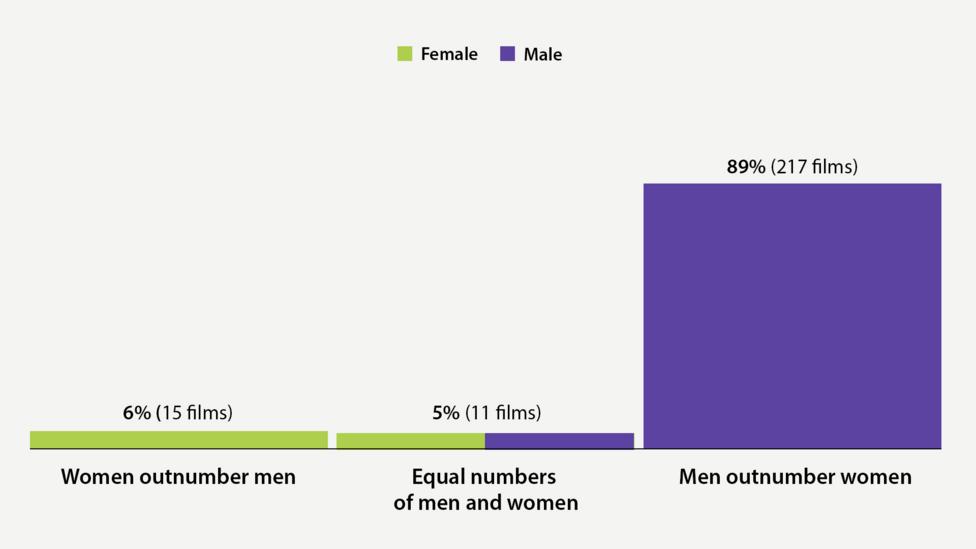 But are other film awards any better? Only one woman has ever won an Oscar for best director, Kathryn Bigelow for The Hurt Locker in 2009. Last year, Rachel Morrison became the first woman ever to be nominated for a cinematography Oscar, for Mudbound. But she didn’t win. Only men have ever won.

I decided to crunch some numbers to find out which festivals have rewarded the most gender-inclusive films in recent times. The most prestigious prize on offer at any festival is the award for best feature film. That’s best picture at the Academy Awards, the Palme d’Or at Cannes, or Berlin’s Golden Bear. I took the winning feature films at 10 major film festivals and awards – including the Oscars, Golden Globes and Cannes – from 1990 to the most recent year. Then I gathered data on the gender of their leading cast and crew. (I assigned people a gender by matching their first names to the Genderize.io database and by searching for online biographies. I excluded the minority whose gender I could not establish.) This gave me gender data for over 2,000 different people who worked on 243 films, with up to 11 roles per film. That includes up to seven lead acting roles, plus the director and other key crew positions such as writer, editor and cinematographer.

Nine out of 10 films have more leading men 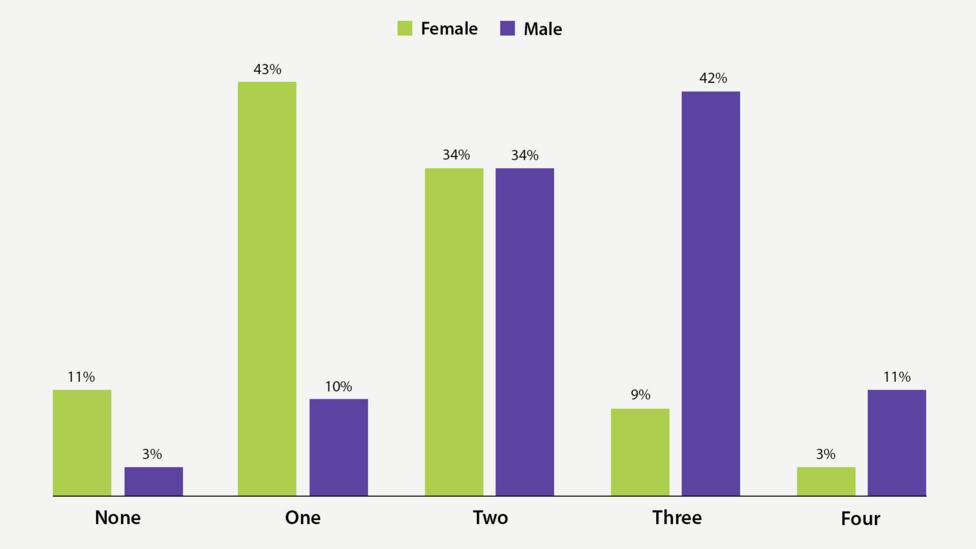 The data across all the awards tells an all-too familiar story of gender exclusion. Almost nine in 10 films (89%) have more men in their 10 or so most senior roles, both acting and non-acting. Only 15 films (6%) have more women, and 11 (5%) have an equal gender balance. None have a 100% female leading line-up, although 15 films are exclusively male. They include 2012 Oscar-winner Argo, and Steven Spielberg’s 1998 war epic, Saving Private Ryan. 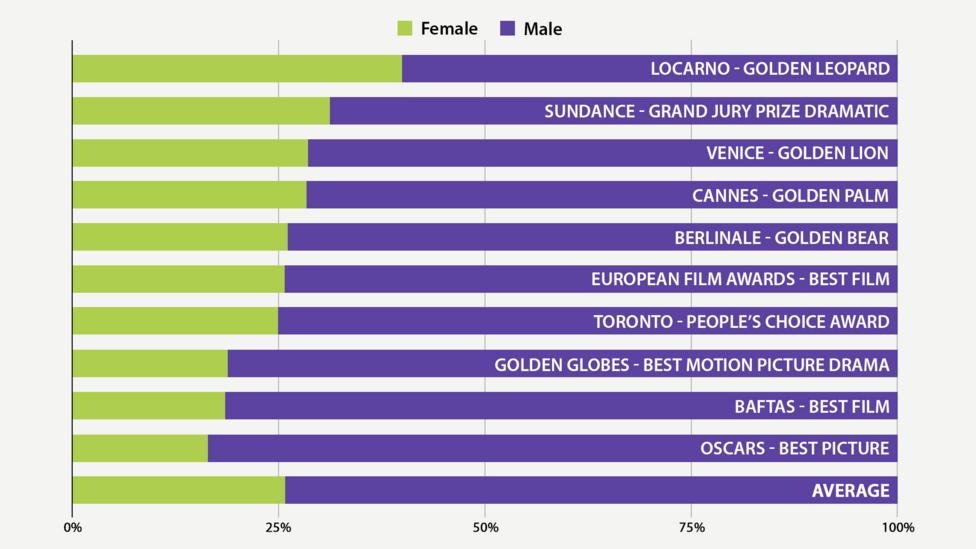 Gender breakdown by film award (Data sources: As before)

On average, about three quarters (74%) of leading cast and crew roles go to men and one quarter (26%) to women. The gender ratio in non-acting roles is especially skewed: 82%-18%. That means women hold fewer than one in five key crew roles. The ratio among acting roles is more equal, at 63%-37%. That is, it’s historically been easier for a woman to have a top film career in front of the camera than behind it, though it’s notable that the most common scenario is one female lead per film – the token woman. 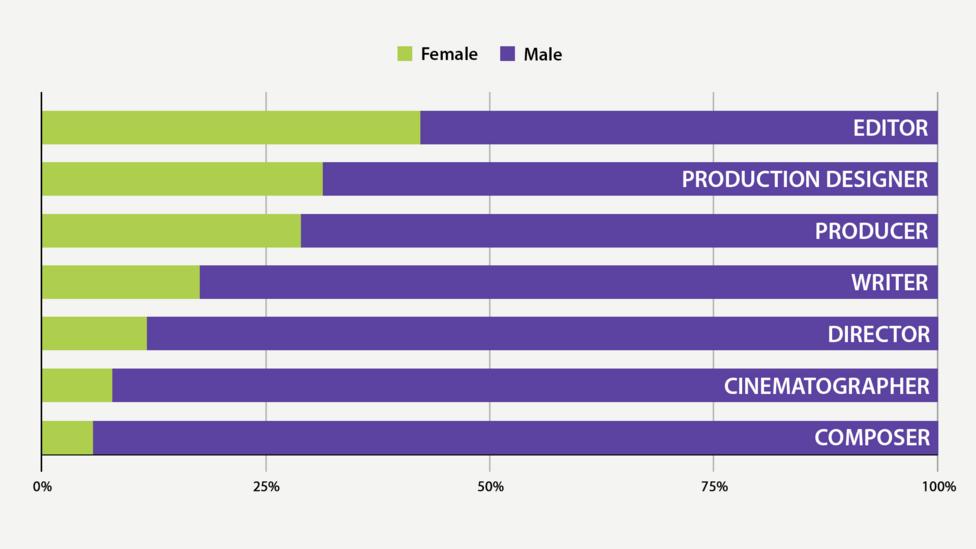 Behind the camera: gender of top crew roles (Data sources: as before)

Best picture at the Oscars gets the dud gong for the least gender-inclusive film award. Since 1990, 16% of lead cast and crew working on best picture-winning films have been female – 27% of acting stars and a tiny 9% of those behind the scenes. In contrast, women have held 40% of leading roles in films winning the Golden Leopard at Switzerland’s Locarno Film Festival over the same period. Acting roles approach gender parity, at 46%. Cannes Palme d’Or winning films perform less badly than you might expect, with 28% of top roles held by women. 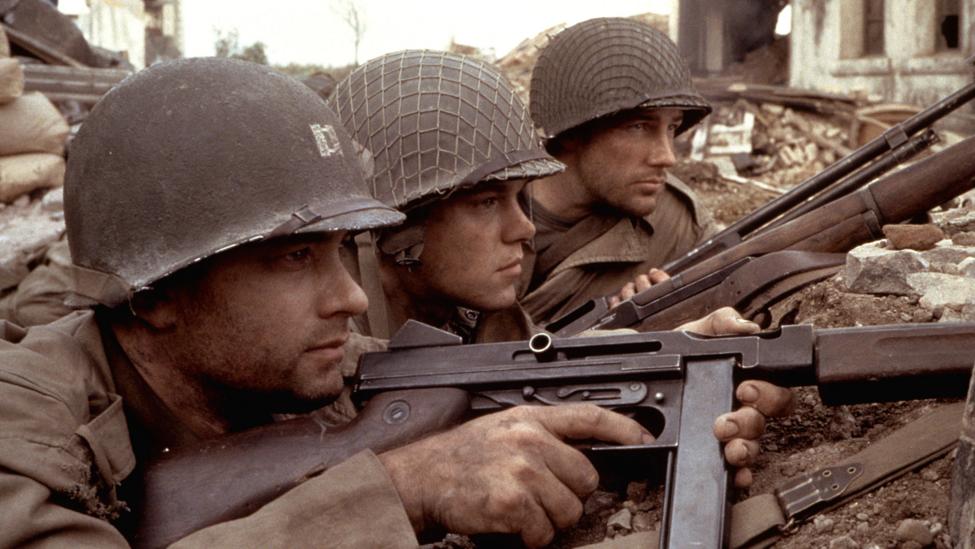 One pattern catches the eye. Festivals that showcase indie and international films, like Locarno and Sundance, tend to do better than those rewarding Hollywood blockbusters. The Oscars, Baftas and Golden Globes all cluster towards the bottom of the table. “It's at the higher levels of the industry, where the money gets big, that I think it is much harder for women to get a fair deal, or even a look in” says Rebecca Wolff, producer at Grasp the Nettle Films. “They are, by and large, not trusted at the helm of multi-million dollar projects and that has a trickle-down effect on the rest of the industry.” But, she adds, “there are glimmers of hope that this is beginning to change”.

Film is becoming more gender-equal, the data suggests, but only for female crew. And the pace of change is glacial. Recent award-winning films do have a higher proportion of women in senior crew positions than those made a generation ago. But not by much. And the share of lead female actors in these films has remained static over the same period, hovering around 35%. This is in line with a recent San Diego University study that found only 37% of speaking roles in the 100 top-grossing US films of 2017 went to women. It was 24% for protagonists, down 5% compared to the year before.

Where are the female directors?

One of the most striking features of the data is the large gender differences that exist between crew roles. Directing (12% female), cinematography (8%), and film-music composition (6%) roles are the most heavily male-dominated. Cinematography, with its stacks of camera equipment, has traditionally been gendered as a masculine activity – which might be why Rachel Morrison’s Oscar nomination took 90 years to arrive. But why are there so few female directors?

If there were more female directors, gender equality might improve across the board

Film critic Anna Smith believes it boils down to unconscious bias. “Some studios might consider a female director more of a ‘risk’ than a male director, whether they admit it or not” she says. “So if a film is directed by a man, and financed by male studio heads, you may be more likely to see a gender imbalance.” The data bears this out. Films with a female director have, on average, more leading female cast and crew (39% excluding the director herself) than films directed by men (28%). A positive takeaway from this is that if there were more female directors, gender equality might improve across the board. 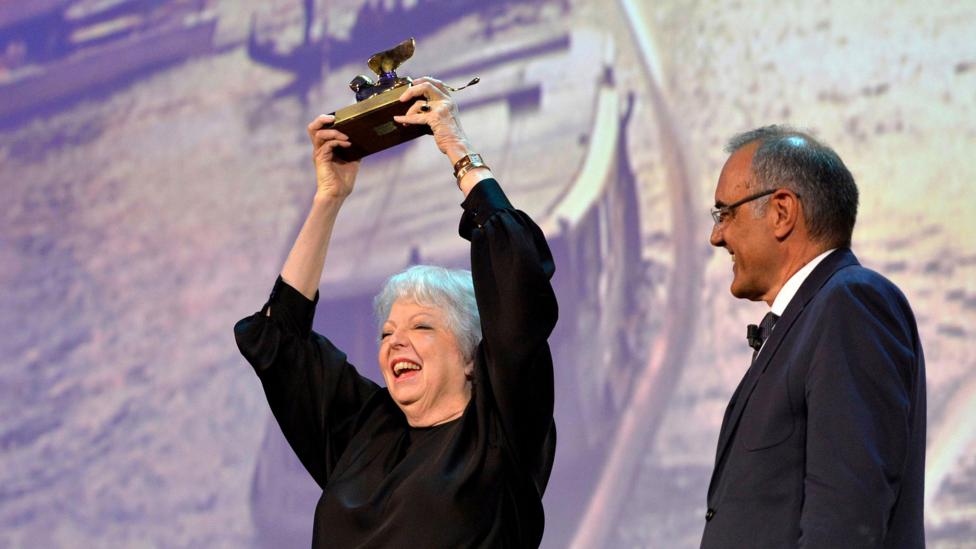 Another encouraging finding is the better female representation among editors (42% female), production designers (31%) and producers (29%). Nearly half of films here have at least one female editor (46%) and it’s similar for producers (45%). Editing roles have historically been more gender-inclusive: 14 movies edited by women have won Oscars for Best Film Editing, including classics like Star Wars (Marcia Lucas in 1977) and Jaws (Verna Fields in 1975). Thelma Schoonmaker has won three times – for Raging Bull (1980), The Aviator (2004), and The Departed (2006).

“When women got pushed out of directing back in the late 1920s with the development of the studio system, editing – along with screenwriting – remained a field that women could flourish in, producer Lizzie Francke told Little White Lies. “I think the perception prevailed that editing was like sewing – it was more akin to ‘women’s work’.” A similar perception exists for producers, according to Rebecca Wolff: “Producers are often seen as facilitators, who get stuff done, rather than as captains of the ship (even though we are, just in a different capacity)” she says. A female producer’s “ability to go out and get films made [...] is not scrutinised in the same way as if we were a director or cinematographer.”

But what will encourage more women into less traditional crew roles, like directing? On-set childcare could be one solution. Women in the creative industries are, as in other areas, forced to take a break from work to have families at what would be “usually the prime moment to drive their career forward”, according to Wolff. British actress Charlotte Riley believes making film and TV sets “more family friendly” would allow talented women to reach top positions.

Cultural change is needed at all levels, says critic Anna Smith: “We need big awards ceremonies like the Oscars to acknowledge more female directors and cinematographers to encourage young women entering the industry. But we also need the culture to be more welcoming of those who already exist – while there are open-minded men in the industry I've also heard anecdotal stories of male crew who've talked back to and undermined female directors and cinematographers, and that's not on.” 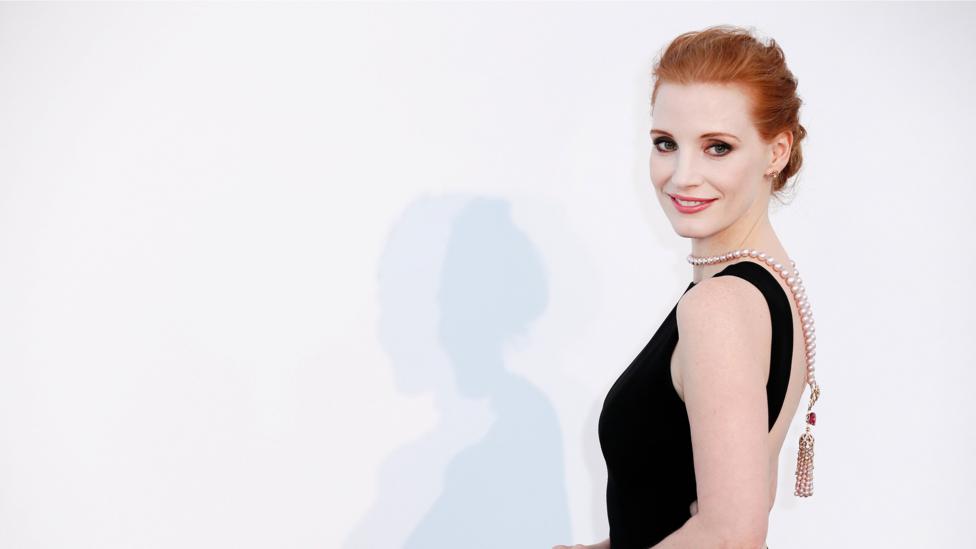 Last year at the Cannes Film Festival, a visibly shaken Jessica Chastain criticised the ‘disturbing’ portrayal of female characters in the programme. “I do hope that when we include more female storytellers we will have more of the women that I recognise in my day-to-day life” represented on screen, she said. Women who “are proactive, have their own agency, don’t just react to the men around them.”

In 2018, post-#MeToo, the mood feels different. Sundance has already awarded four female directors this year. There’s the gender-balanced Cannes jury. Even the share of women voting in the Oscars is increasing.

But let’s be clear: until now the top awards on offer at film festivals have been grossly biased towards men. Not because they are better actors and film-makers, but because more men have made and starred in films.