Loading
Stories that shaped the world | Books
The greatest tale ever told?
Share using EmailShare on TwitterShare on FacebookShare on LinkedinShare on Whatsapp 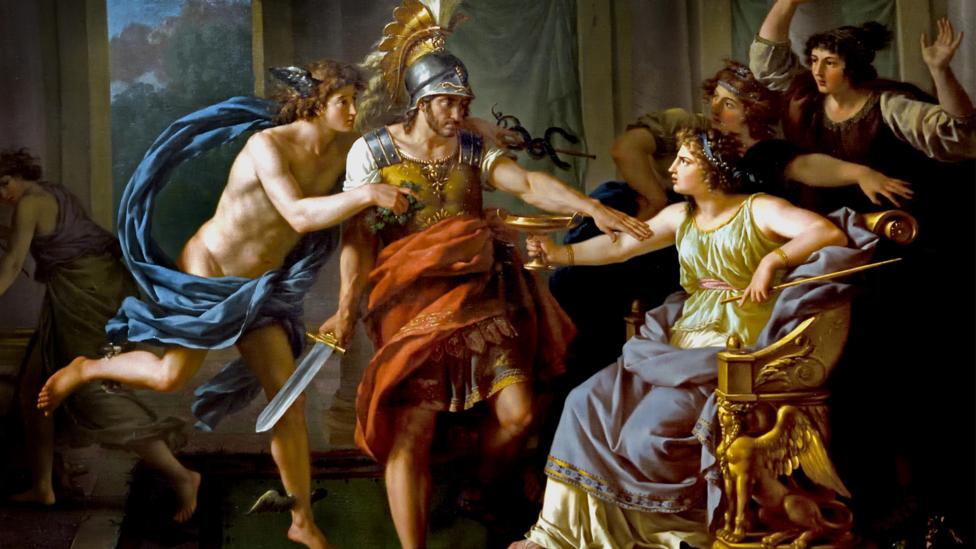 By Natalie Haynes 22nd May 2018
Homer’s Odyssey has topped our poll of 100 Stories that Shaped the World. Natalie Haynes looks at why the epic poem has survived for millennia.
I

If any story can be considered the greatest tale ever told, Homer’s Odyssey has a better claim than most. Twenty-four books long, it runs to more than 12,000 lines of hexameter verse (the poetic form used in Greek epic and Latin epic after it) and follows the adventures of the wily, complicated Greek hero, Odysseus, in the aftermath of the Trojan War. The Odyssey has been valued as a cultural highpoint for millennia: in the 5th Century BCE, the Athenian playwright Aeschylus referred to his tragedies as “slices from the banquet of Homer”.

-  The 100 stories that shaped the world

Writers from Dante to James Joyce to Margaret Atwood have taken inspiration from this original quest story. But Odysseus’ quest itself is an almost mundane affair, amid the gods and monsters which populate the poem. Because it is not about sailing off to find something wondrous and new (a golden fleece, for example, or an undiscovered land). It’s about a man trying to get home at the end of a 10-year war. 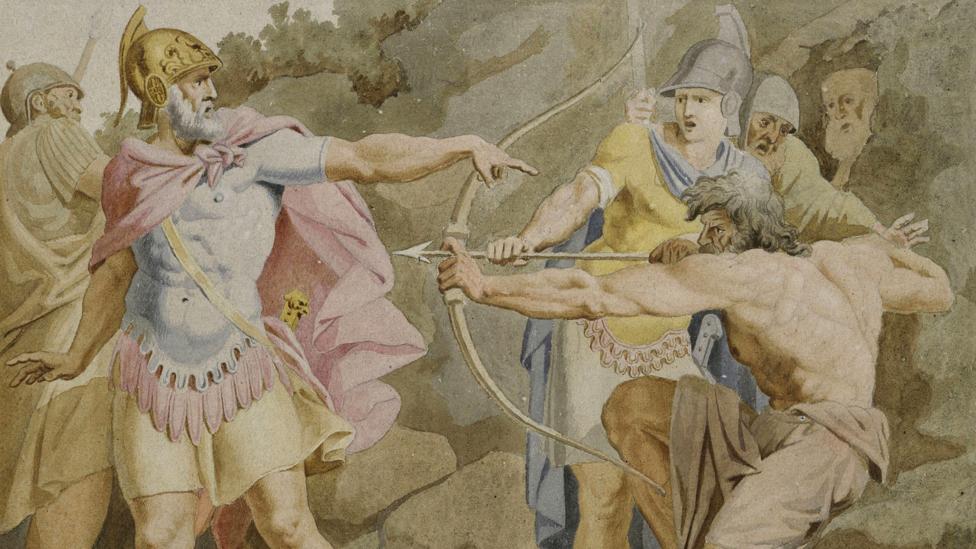 Rather than seeking adventure, The Odyssey is about a man returning home (pictured, Philoctetes aiming the bow of Hercules at Odysseus by Asmus Jacob Carstens) (Credit: Alamy)

Odysseus is a husband away from his wife, a father who has missed his son growing up, a warrior whose war is over, a leader whose men all die

And this is surely the reason that the poem remains so central to our culture today, some 2700 years after it was composed (in the 8th or more probably 7th Century BCE). It is a story which is simultaneously grand and intimate, vast in scope but with attention paid to the smallest details (the flowers which grow outside Calypso’s cave, the softness of the fleece of the Cyclops’ sheep). It is a story that asks questions about what it means to be a man, particularly when he has been stripped of the context that has previously defined him: Odysseus is a husband away from his wife, a father who has missed his son growing up, a warrior whose war is over, a king who is far from his kingdom, a leader whose men all die, an adulterer who is the plaything of goddesses, and a son whose mother dies of a broken heart because she believes him dead. He is a voyager, a pirate, an adventurer, a refugee.

The poem also asks its audience to consider the very nature of story-telling, as lies, exaggerations and tall tales vie with one another in a fractured timeline. Odysseus’ story is told with varying degrees of accuracy by himself, by bards singing their epic verses as Homer must have done, and even by Odysseus disguised as a bard, fabricating deceit about his voyages for his own purposes. When Odysseus listens to the Sirens’ song, in Book 12, he is the only one of his crew who is able to hear them. His men have all blocked their ears with softened beeswax, because Siren song is deadly and lures men to their deaths. 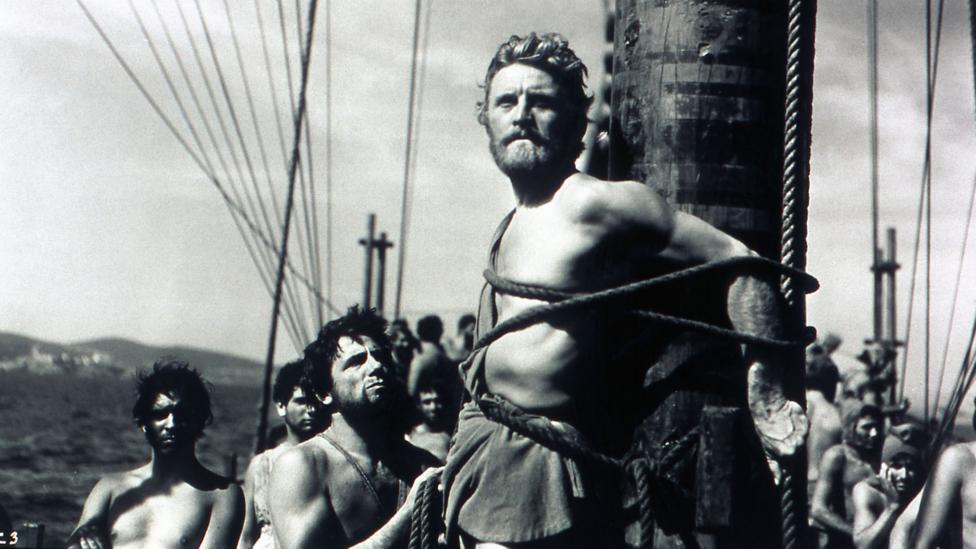 Kirk Douglas played Ulysses in the 1954 film based on Homer’s epic – in this scene, he listens to the song of the Sirens while strapped to a ship’s mast (Credit: Alamy)

Odysseus is so desperate not to miss out on any part of his adventure that he has his men lash him to the mast of his ship, so he can hear but not move. Talk about a captive audience. And the Sirens know the way to his heart, too: they call him ‘poluain’ – much-praised. We are in no doubt that Odysseus is the hero of many stories, and it is just our good luck to follow him through this particular set of fantastical adventures.

The Odyssey covers the 10-year period that it takes Odysseus to return to his home, Ithaca, from Troy. But it begins near the end of the 10th year, as Odysseus waits on Ogygia, the island where he has been living with the nymph Calypso for the past seven years, gazing out at the sea and wishing he could return home. The first three years of travel brought him into contact with one-eyed man-eaters, drowsy drug addicts, murderous giants, deadly Sirens, a witch, and the terrifying Scylla and Charybdis. All these adventures are told in flashback. We also manage to follow two other storylines, as we keep tabs on Penelope (Odysseus’ long-suffering wife) and trace the smaller-scale wanderings of Telemachos (their rather immature son). 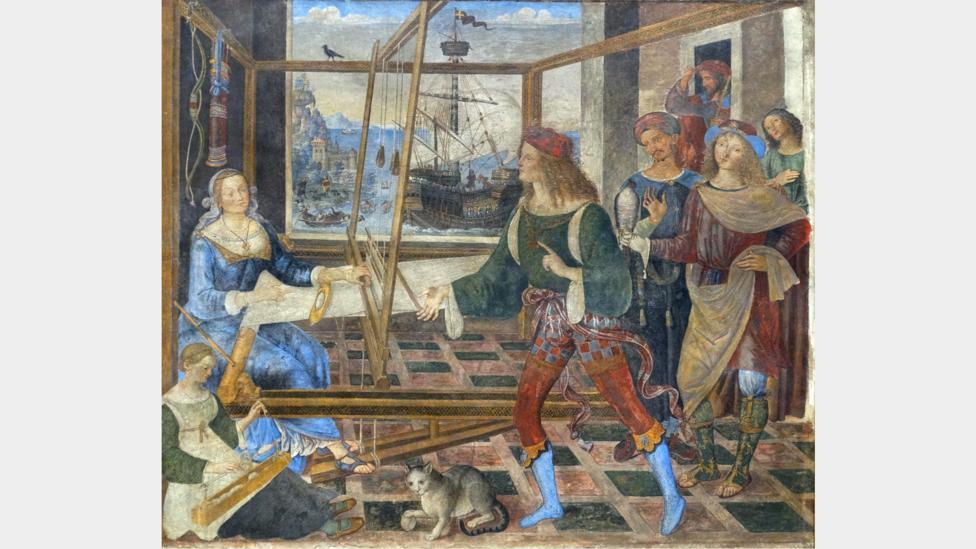 Odysseus’ wife Penelope has to fend off suitors as she waits for her husband to return (Credit: Alamy)

Perhaps the most famous of Odysseus’ adventures appears in Book 9, when he and his men arrive on the island of the Cyclopes. Polyphemos – a one-eyed giant with an appetite for human flesh – traps Odysseus and his men inside his cave. He asks Odysseus’ name, because he likes to know who he’ll be eating later. Odysseus tells him it is Outis – No-one. Odysseus gets Polyphemos drunk, and pokes out his eye with a heat-sharpened stick. This ensures that the Cyclops will be too incapacitated to eat our hero. But he is not so incapacitated that he cannot remove the huge rock which seals the entrance to his cave (so his sheep can get outside the next day) allowing Odysseus to make his escape. When the Cyclops bellows that No-one is hurting him, his fellow island-dwellers ignore the noise. If no-one is hurting him, there’s obviously nothing they can do.

It is in Odysseus’ nature to lie: constructing an artificial identity or backstory is something he does with remarkable ease and frequency throughout the poem. But as he sails away from the blinded giant, he cannot resist shouting out his real name, so that Polyphemos knows that he has been bested by none other than the famous Odysseus. It does not occur to him that Polyphemos might have friends in high places. Or rather, low places: Polyphemos turns out to be the son of Poseidon, the god of the sea. If you are making your way home by ship, Poseidon is really the last god you want to antagonise (although Odysseus has near-constant support from his own divine helper, Athene).

The fantastical elements of The Odyssey have made it a source of inspiration to writers in virtually every field. James Joyce used it as the foundation for Ulysses (the Latin name for Odysseus). Margaret Atwood wrote The Penelopiad, which examines Odysseus’ violent homecoming from his wife’s perspective. Children in the 1980s watched a Franco-Japanese sci-fi cartoon, called Ulysses 31, following the adventures of Ulysses and Telemachus in space. The childlike in 2018 might be playing Super Mario Odyssey, in which the titular hero seeks to rescue Princess Peach from forced marriage to Bowser. It is just such a union which Penelope fears, as she delays her many suitors in The Odyssey, hoping that her true love will return before she is compelled to marry anyone else. Mario travels on a ship made out of a giant hat, which is not strictly Homeric, but other parallels are certainly there.

The most recent series of Prison Break was clearly written by Odyssey fans: Michael Schofield has been held for seven years in a prison named Ogygia (the name of Calypso’s island and the same duration of imprisonment, though Odysseus has a rather nicer time of things than Schofield). He has even adopted Odysseus’ alias, Outis, and before the series is completed, he battles an agent codenamed Poseidon, and blinds a one-eyed man. And as Chihiro watches her parents eat too much and turn into pigs, in Miyakazi’s 2001 classic film Spirited Away, we can only think of Circe turning Odysseus’ men into swine in the same way.

The Odyssey is an epic of such depth, detail and complexity that every reader can find something new in its poetry and every writer can take inspiration from its story. In another 2700 years, that will still be true.

More on The Stories that Shaped the World:

- The 100 stories that shaped the world

- Is The Odyssey the greatest tale ever told?