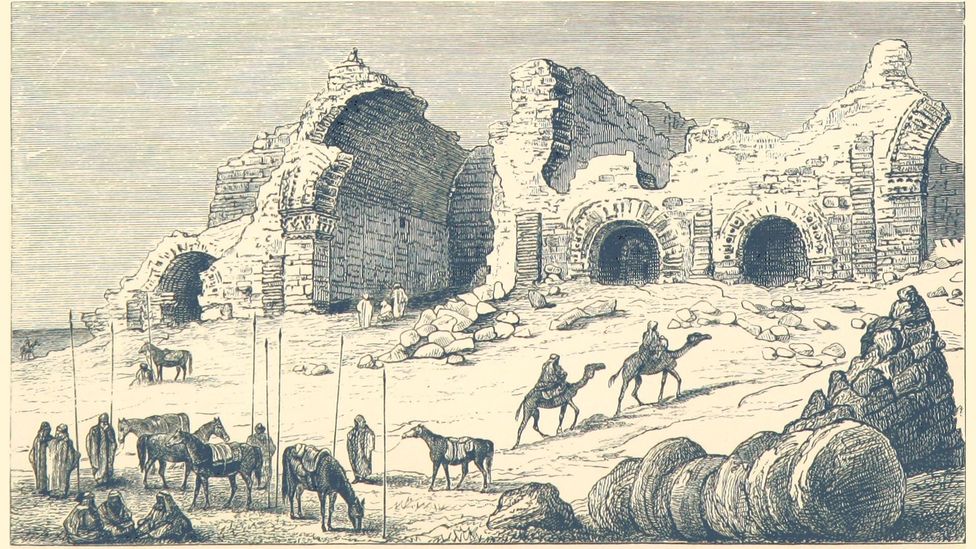 A bleak landscape stretches out in all directions, broken only by wind-hewed formations of sandstone. A lone traveller wanders this hostile, waterless place, looking for shelter. And then on the horizon, a line of ruined walls appears to him like an apparition. In the heat haze, they seem to hover above the ground. As he gets closer, memories of this place come back to him. Broken tents and pegs, abandoned fire pits, the signs of a camp long-since abandoned: this is the place where he once met the love of his life, now lost forever. As he wanders the ruins, he sees deer and goats grazing where he once walked with his beloved. He sees the plants of the desert bursting up through the tent where they once lay together. As the memories of this place rush back to him, the horizon flashes with thunder and the rain finally comes to the land.

Legend has it that ‘ruin poetry’ began with a 6th Century king, exiled due to an excessive love of poetry

This scene is a famous one. For centuries, it appeared and reappeared throughout Arabic poetry, and became one of the primary poetic tropes of the Pre-Islamic period and the early days of Islam. It is known as wuquf 'ala al-atlal, or ‘stopping by the ruins’, and today, it has found new life in the work of a generation of artists reacting to the loss of war and state violence across the Middle East.

- The rare blue the Mayans invented

- The book that defines Iranians

- Can language slow down time?

The motif of the atlal (‘ruins’) originates in the pre-Islamic period, among the so-called Jahili (‘agnostic’ or Pre-Islamic) poets. It’s thought that its originator was the 6th Century poet-king Imru’ al-Qais. Al-Qais was the last king of the kingdom of Kindah, and is often hailed as the father of Arabic poetry. He spent much of his life banished from his kingdom, ostensibly due to his excessive love of poetry, and during his exile he wandered the lands of Arabia and wrote poetry. Legend has it that one of his poems was later written in gold and included in the Mu'allaqat (the Hanging Poems), seven pieces of poetry supposedly suspended from the Kaaba at Mecca, Islam’s holiest shrine.

Imru’ al-Qais, an exiled poet-king, is credited as the originator of the ‘ruin poetry’ form – one of his poems is said to hang in the Kaaba at Mecca (Credit: The British Library)

In his contribution to the Mu'allaqat, al-Qais describes a character stopping for a time at the ruins of a campsite and remembering his beloved in the ruins. He opens by describing the desolate place, broken and overgrown by nature:

The traces of her encampment are not wholly obliterated even now.
…
The courtyards and enclosures of the old home have become desolate;
The dung of the wild deer lies there thick as the seeds of pepper.
(The Mu’allaqah of Imru al-Qais)

The word wuquf that gives the trope its name holds the double meaning of 'standing' and 'stopping', so this portion of the poem usually forms a moment of stillness and meditation, outside of time. The landscape comes to represent loss and longing, a container for memory. After reminiscing about his beloved, al-Qais’s character is brought back to the present by a flash of lightning:

But come, my friends, as we stand here mourning, do you see the lightning?
See its glittering, like the flash of two moving hands, amid the thick gathering clouds.

Another great master of poetry was Tarafa, a near-contemporary of al-Qais whose poem was also included in the collection of the Mu’allaqat. Imitating al-Qais, Tarafa’s poem opens with ruins appearing on the horizon like an apparition:

The ruins Khawla left
on the mottled flatlands of Thimhad
appear and fade, like the trace of a tattoo
on the back of a hand.
(The Mu’allaqah of Tarafa)

The 'appearance' of the ruins carries the same sense as an apparition: dreamlike and strange, lingering on the horizon. 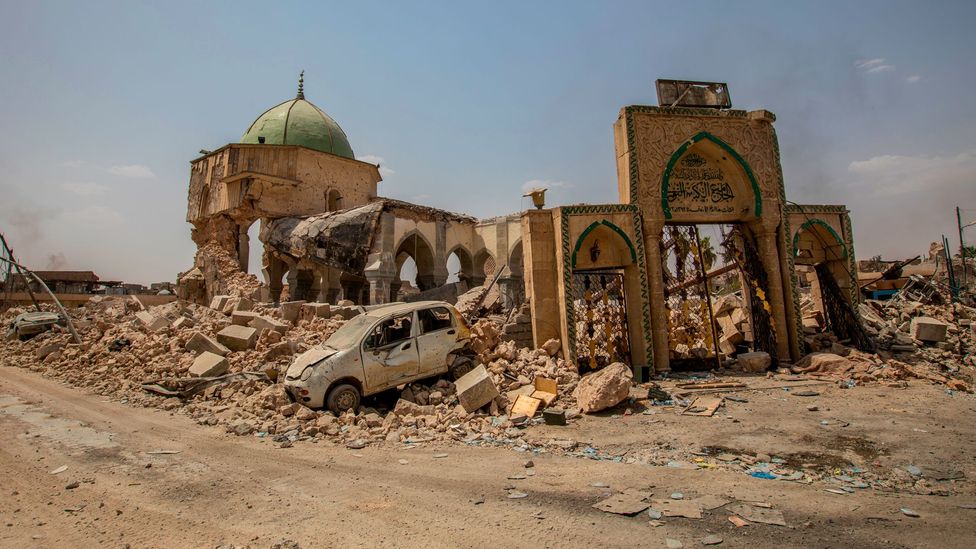 Countless structures, including the Al-Nuri Mosque in Mosul, Iraq, have been the collateral damage of the many conflicts spanning the Middle East (Credit: Getty Images)

Once he reaches the ruins of the campsite, the poet remembers a lost love. He sees her traces everywhere in the debris, even in the dust of the earth:

When I snap the rough-fringed whip
she bursts forward,
vapours smouldering
over the kindled rock terrain.

The ruins remind Tarafa of the cruelty of fate and the indiscriminate passing of time. They speak of life’s injustice and the inevitability of loss:

You see two heaps of earth
with silent slabs
of hard, deaf stone
piled up upon them.
I see death choose
the generous and the noble,
while picking over the best part
of the hardened miser's spoil.

The sentimentality toward ruins shown by Tarafa, al-Qais and other pre-Islamic poets meant that by the Islamic Golden Age of the Abbasid period, the trope began to attract mockery. The poet Abu Nuwas (762 – 813 CE), famous for his thirst for wine and his love affairs with men and women, and who was dubbed the “bad boy of Abbasid poetry”, openly mocked the motif of the atlal in one of his poems:

Despite this mockery, the atlal trope endured through the ages, and today in the Middle East, a new generation of artists is returning to this ancient trope and using it to make sense of the loss and destruction experienced in countries with recent experience of war: most prominently in Iraq and Palestine.

The seminal Palestinian poet Mahmoud Darwish is one of the most significant inheritors of the atlal tradition. His poem “Standing Before the Ruins of Al-Birweh” is one example: it relates his return to the ruined village of al-Birweh, where he was born. In 1948, when Darwish was 7, Israeli forces occupied the village and depopulated it of its Palestinian inhabitants, leaving only ruins. 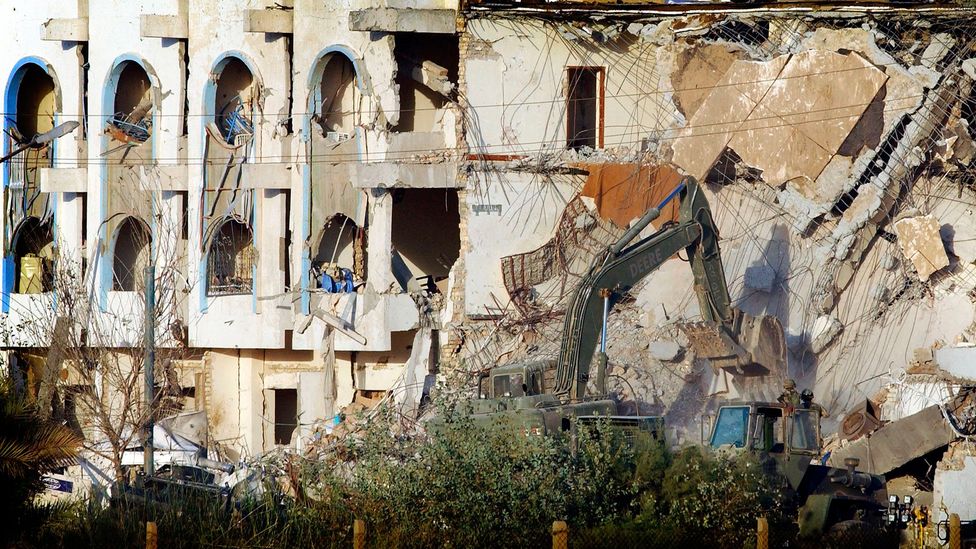 Whereas Arabic poets once used ruins to symbolise lost loves and other wistful memories, today’s poets use ruins, such as this in Baghdad, to reflect on war (Credit: Getty Images)

The lines of Darwish’s poem mimic the Mu’allaqat of Tarafa and al-Qais, and even mention those ancient Jahili poets:

Stop so that I may weigh the place
and its emptiness with Jahili odes
full of horses and departure
For every rhyme we will pitch a tent
For every home to be stormed by the wind,
there is a rhyme.

In the ruins, Darwish’s memories of his childhood resurface, just as the ancient poets saw memories of their lost loves. The ancient trope here becomes a way of mediating the loss of a home, and the injustice of war. 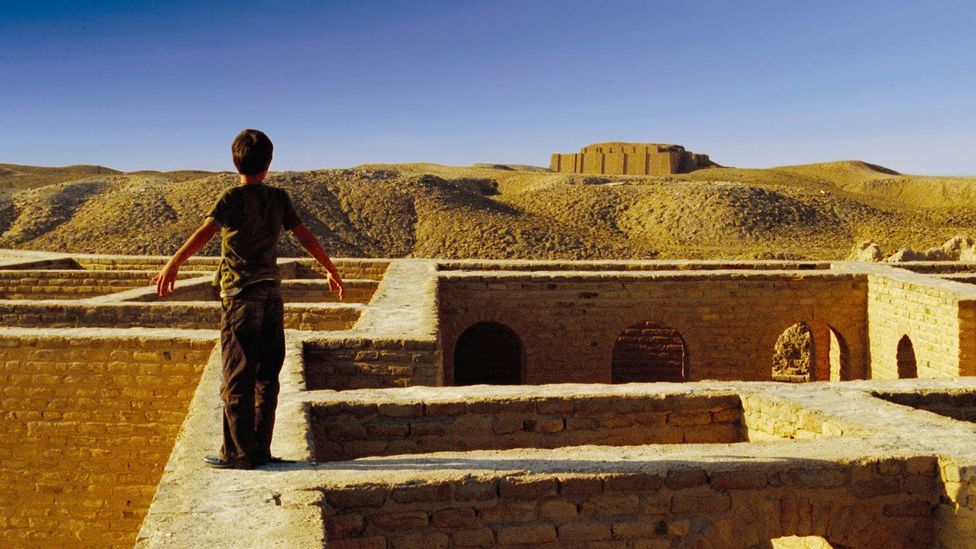 The ruins of earlier civilisations throughout the Middle East feature prominently not only in Arabic poems but in films made in the region, such as Son of Babylon (Credit: Alamy)

Iraqi novelist Sinan Antoon, who translated his Al-Birweh poem, has spoken at length about Darwish’s use of the ruins motif in his poetry. Darwish, Antoon says, is “a rememberer of a past that never had a chance to live, but lives on as a trace. That is, the trace in the atlal of classical Arabic poetry.”

“The ruins, or atlal,” Antoon argues, “stand for a previous presence… and are reminders of an ongoing obliteration and exile.”

In Antoon’s own novels, the atlal trope resurfaces again and again as a way of discussing the violence inflicted upon Iraq, and his home city of Baghdad. To take just one example, in his novel The Corpse Washer, Antoon has a character wander through the ruin of the Baghdad National Library, which was destroyed during the 2003 invasion, and the National Film Archive, the repository of a century of Arab film-making destroyed by a US bomb. In Antoon’s novel, the ruins of Baghdad are human and bodily: they are “gutted”, “skeletons”, “like a corpse”. The bodies and souls of the people, conversely are like ruins: “I felt the wreckage I’d been carrying inside me mount even higher”. Even language becomes a ruin in Antoon’s first novel, I’Jaam, as the letters of Arabic themselves begin to disintegrate and the meaning of the text becomes unclear and ambiguous. 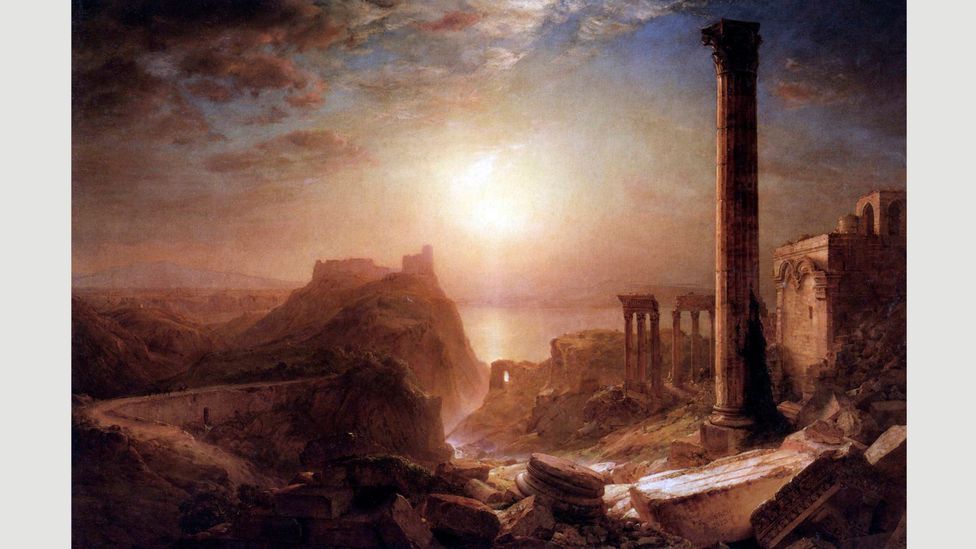 One of the most visible migrations of this trope is into cinema. In 2010, the award-winning Iraqi film Son of Babylon by director Mohamed al-Daradji made use of Iraq’s unique wealth of cultural heritage, and shows characters wander in and out of ruins both ancient and modern. The film tells the story of a young Kurdish boy, Ahmed, who travels with his grandmother to search for his imprisoned father after the 2003 US invasion. They pass the ruins of Iraq’s ancient cities, such as Ur, Nimrud and Bablyon, some of humanity’s earliest settled cities, and through the modern ruins of Baghdad and Nasiriyah where police stations have been ransacked and prisons holding political prisoners have been destroyed.  Rather than seeing memories held in the ruins, al-Daradji’s characters find only blankness and emptiness, pointing to the meaningless and loss of war. Al-Daradji makes use of the ruins of war and civil strife to bring the atlal trope into a new context, but instead of signifying a specific memory, the ruins are asked to memorialise the loss of a whole generation, and point to loss without redemption.

From the earliest days of the Bedouin poets to the urban battlefields of modern wars, the trope of the ruin-wanderer has evolved and expanded. In the generations of violence that have devastated the urban environments of places like Palestine, Iraq and Lebanon, the atlal trope has become relevant again, and a new generation of artists has found a new way to make the ruins of the past speak.