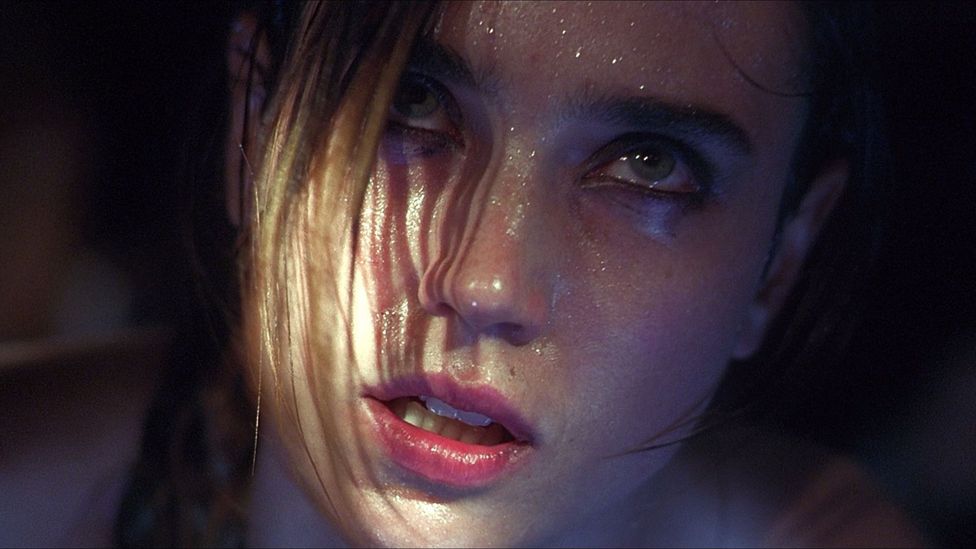 By Arwa Haider 28th August 2018
That depictions of ‘madness’ have been dominated by horror films is revealing of the film industry’s historic insensitivity about mental health, writes Arwa Haider.
Y

You don’t have to be ‘mad’ to be in the movies – but the film industry has generally shown a shaky vision of mental health. It’s not that cinema evades ‘taboo’ themes here; it’s more that it tends to swing wildly from sentimentality to sensationalism. Which means that the perspective of Mad to Be Normal, a 1960s-set biopic of Scottish psychiatrist RD Laing, just out on video on demand (VoD), feels intriguingly new. David Tennant stars as Laing: a complex and charismatic figure, who earned fame for his radical, empathetic treatment of mental illness. 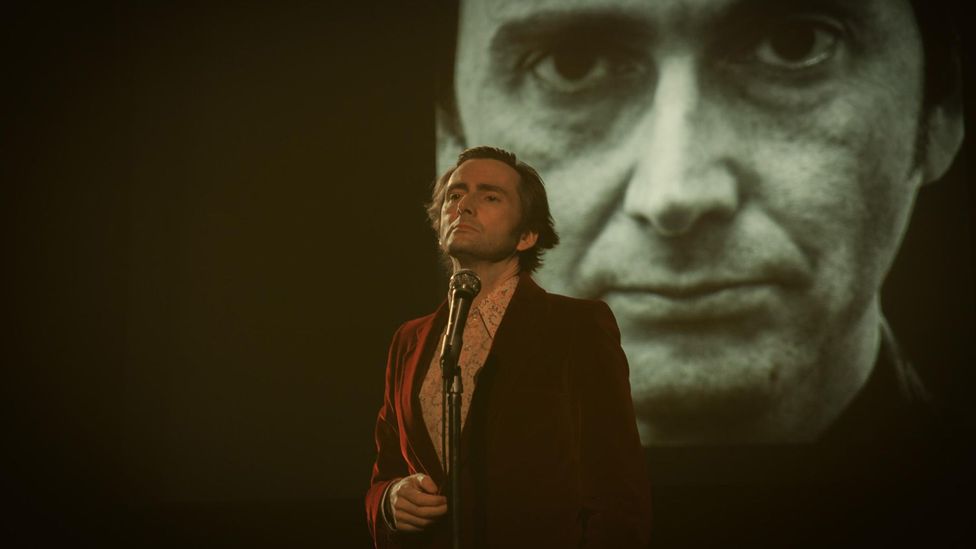 The new film Mad to Be Normal is a biopic of RD Laing, a Glasgow psychologist who had unconventional ideas about treatment for mental illness (Credit: GSP Studios International)

Our mainstream perceptions of ‘madness’ are still fixated with movie scenes

The real-life Laing was sharply quotable (he described insanity as “a perfectly rational adjustment to an insane world”) and counter-cultural (he argued that traditional society was “driving our children mad”; he recommended LSD for his adult patients). He also fought personal demons including alcoholism and depression. Tennant’s onscreen Laing is impressively joined by Elisabeth Moss, Gabriel Byrne and Michael Gambon. Still, mainstream cinema struggles with a mental health ‘hero; Mad to Be Normal’s trailer booms: “To some he’s certifiable… To others he’s a saint”.

- Why West Side Story is so timely now

- Can data reveal the saddest song ever?

- Is Crazy Rich Asians a must see?

Meanwhile on the small screen, there’s a feverish buzz around the imminent Netflix series Maniac (based on the Norwegian psych ward-set drama of the same name). In the glossy and trippy US show, Emma Stone and Jonah Hill star as strangers undergoing a mysterious drug trial that claims to resolve mental health issues; “It’s not therapy – it’s science,” Maniac’s eerie Dr Mantleray (Justin Theroux) tells his patients. Stone explained to Elle magazine:

“The thing I liked about Maniac was that it’s about people who have their own internal struggles and are trying to fix them with a pill. But you see over the course of the show that human connection and love is really the only thing that gets us through life.” 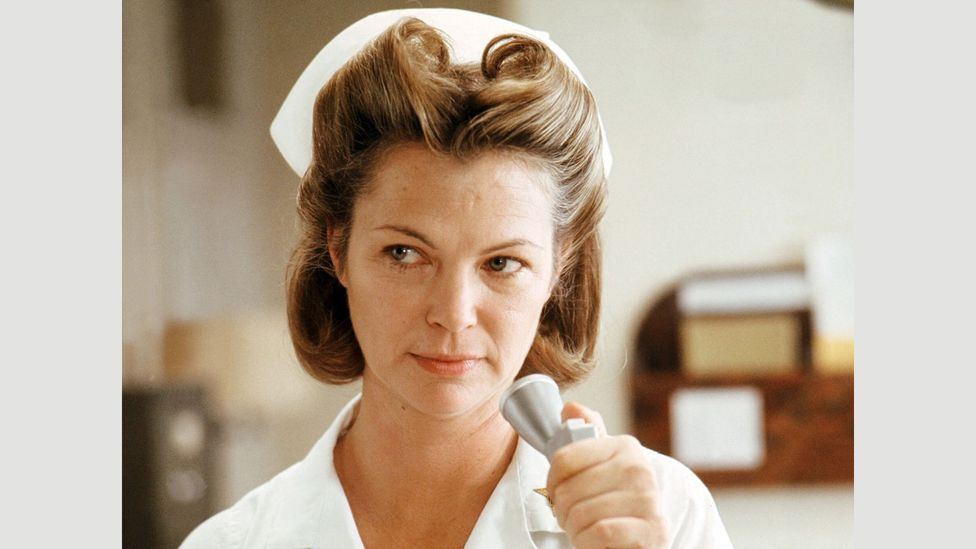 One Flew Over the Cuckoo’s Nest depicted a hellish facility for the mentally ill – epitomised by the villain Nurse Ratched (Credit: United Artists)

So creative drama is drawn to the complexity and fragility of the mind – but mainstream entertainment still demands a snappy fix. And the definition of ‘insanity’ is inherently problematic; it’s regarded as an outmoded medical term. Dr Ryan Howes writes in Psychology Today that “it’s informed by medical health professionals, but the term today is primarily legal, not psychological” and cites the Law.com definition: “mental illness of such a severe nature that a person cannot distinguish fantasy from reality, cannot conduct her/his affairs due to psychosis, or is subject to uncontrollable impulsive behaviour.”

Yet our mainstream perceptions of ‘madness’ are still fixated with movie scenes – much more emphatically, in fact, than the novels or memoirs on which they might be based. A classic film like One Flew Over the Cuckoo’s Nest (1975) seals the impression of a soul-destroying psychiatric asylum, where livewire convict RP McMurphy (Jack Nicholson) feigns insanity to escape prison labour – yet is ultimately crushed by the system. The dramatic depiction of patient treatment, particularly its brutal electroconvulsive therapy sequences, had far-reaching impact. In 2011, The Telegraph went so far as to say that the film was responsible for “irreparably tarnishing the image of ECT… It also catalysed the development of more effective anti-psychotic drugs that allowed patients to… live more normal lives.” 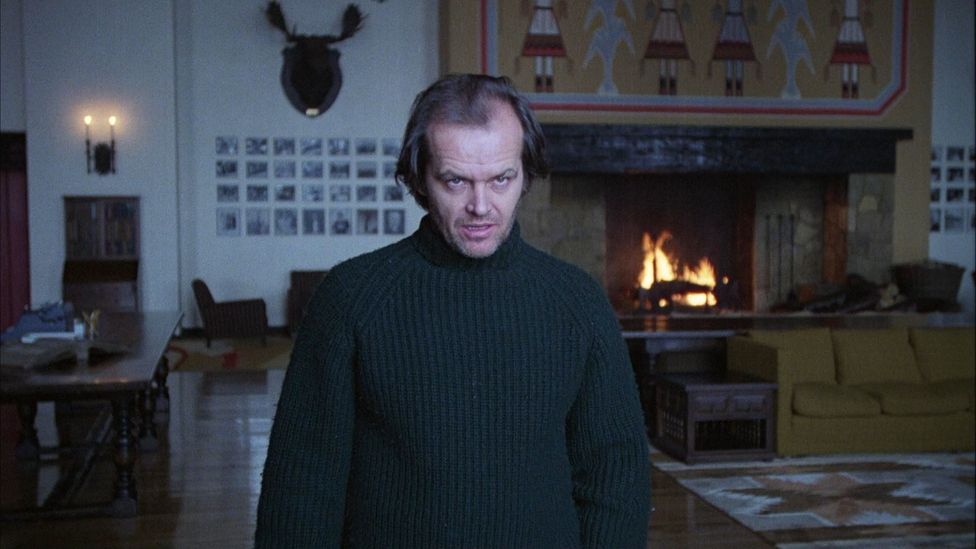 Many depictions of aggressive psychosis tend to perpetuate the idea that mental illness results in extreme, and scary, behaviour, as in The Shining (Credit: Warner Bros)

In 80s slasher movies, ‘crazy’ is personified as evil, and often masked or disfigured to ramp up the shock effect

Meanwhile, Nicholson would play the madman as murderous showman – “Heeere’s Johnny!” – in Stanley Kubrick’s 1980 classic, The Shining. For decades, in fact, horror films seemed to dominate depictions of ‘madness’ – not least in Hitchcock’s Psycho (1960), from Anthony Perkins’s eerily iconic Norman Bates to the unhinged strings of Bernard Hermann’s score. Things get particularly schlocky with the glut of slasher-movie monsters:  Halloween’s Michael Myers, Friday the 13th’s Jason Voorhees, A Nightmare on Elm Street’s Freddy Krueger – ‘crazy’ is personified as evil, and often masked or disfigured to ramp up the shock effect.

From sensationalistic to sensitive?

US psychologist Dr Danny Wedding diagnoses several issues in his book Movies And Mental Illness: “Films such as Psycho (1960) perpetuate the continuing confusion about the relationship between schizophrenia and dissociative identity disorder (formerly multiple personality disorder); Friday the 13th (1980) and A Nightmare On Elm Street (1984) both perpetuate the misconception that people who leave psychiatric hospitals are violent and dangerous; movies such as The Exorcist (1973) suggest to the public that mental illness is the equivalent of possession by the devil; and movies such as One Flew Over the Cuckoo’s Nest (1975) make the case that psychiatric hospitals are simply prisons in which there is little or no regard for patient rights or welfare. These films in part account for the continuing stigma of mental illness.” 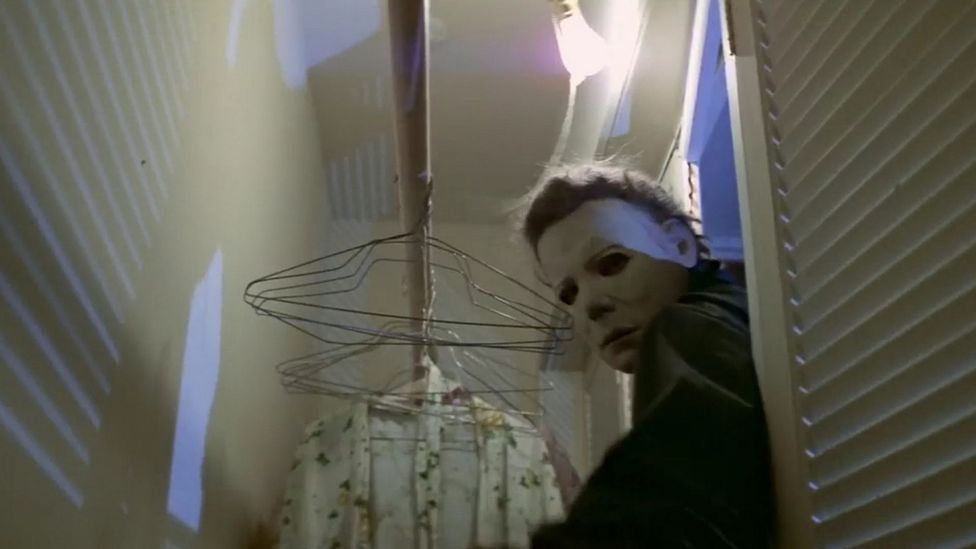 The meeting of the supernatural and someone with profound psychosis is best represented by Halloween villain Michael Myers, who seems to be nearly immortal (Credit: Lionsgate)

At the same time, films might echo superstitions and stigmas that are already deep-rooted in varied cultures and beliefs – including the idea that mental illness is somehow otherworldly or supernatural. The academic article Culture and Hallucinations: Overview and Future Directions (Frank Laroi, Tanya Marie Luhrmann and Angela Woods, 2014) argues that “culture does indeed have a significant impact on the experience, understanding and labelling of hallucinations and… there may be important theoretical and clinical consequences of that observation.” The 1926 Japanese silent movie, A Page of Madness is hauntingly beautiful and surreal (with an expressive use of masks and dream sequences) and set in an asylum where a married couple have become inmate and caretaker – it highlights family honour and guilt. 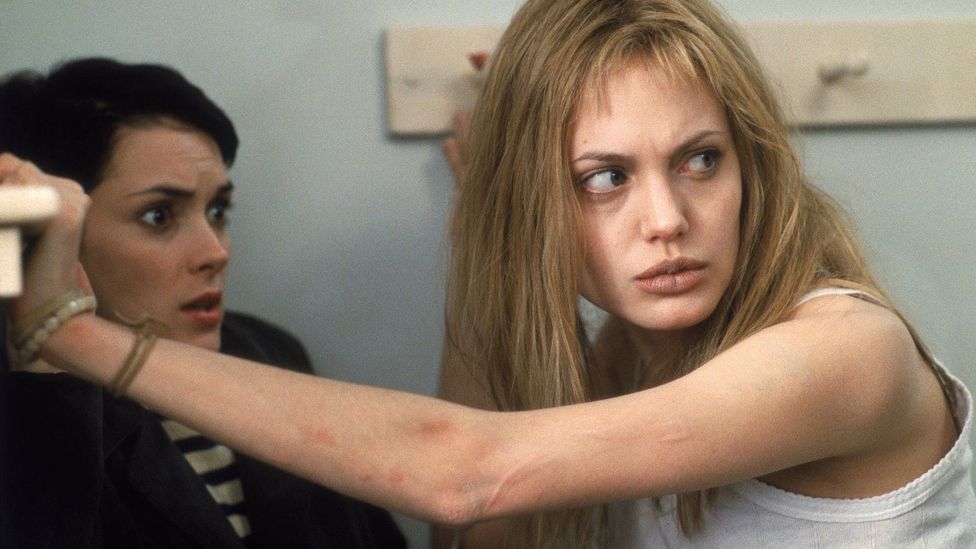 Angelina Jolie received an Academy Award, along with many other honours, for her performance as a woman diagnosed as being a ‘sociopath’ in Girl, Interrupted (Credit: Sony)

The mainstream terror of the ‘mad woman’ still prevails in Fatal Attraction (1987), where Oscar-nominated Glenn Close transforms from career woman to spurned lover to murderous ‘bunny boiler’. Close has lucidly reflected on her character, including in a 2017 interview with The New York Times (“she’s considered evil more than a person who needs help, which astounds me”). In the same interview, mental health advocate Patrick Kennedy added, with Close present:

“Honestly, that character has probably contributed to the stigmatisation of people with mental illness as much as anything. It’s such a seminal movie. And unfortunately, Glenn did such a good job.”

Elsewhere, there have been more sympathetic portrayals of female mental illness – including Gena Rowlands in John Cassevetes’ A Woman Under the Influence (1974), or Jessica Lange’s 1982 biopic role as Frances Farmer (a 1930s US actress who was forced into a psychiatric institution). Winona Ryder led the cast of Girl, Interrupted (1999), adapted from Susanna Kaysen’s real-life 1960s account of spending time in a youth psychiatric hospital. Ryder’s co-star Angelina Jolie won an Oscar for her role, but Kaysen herself was less convinced by the film, dismissing it as “melodramatic drivel”. 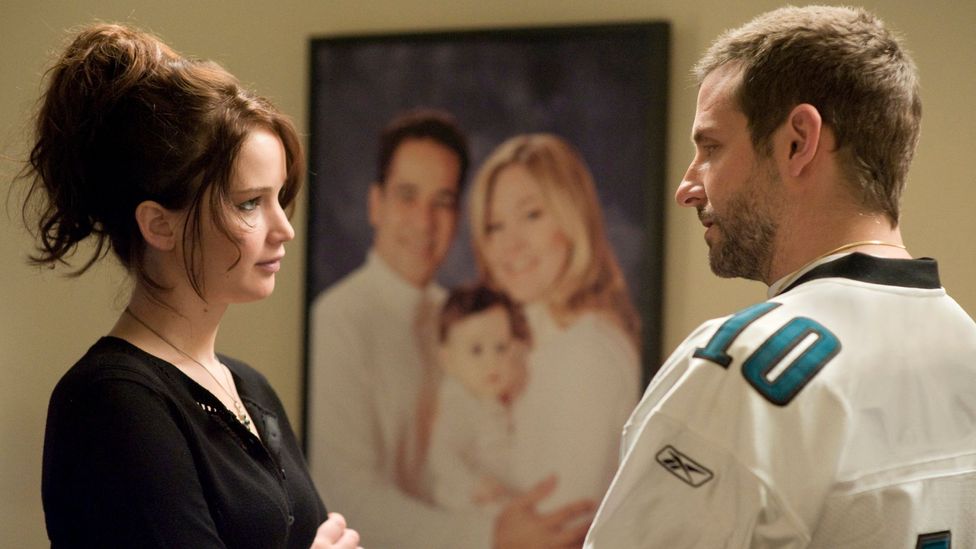 Silver Linings Playbook is notable for not showing mental illness as scary or worthy of stigma while still highlighting the value of mental health treatment (Credit: Alamy)

Movies demand a conclusion, more than most art forms – and ‘madness’ has traditionally led to tragic fates, even in the most compassionate narratives. In Egyptian film director Youssef Chahine’s masterpiece Cairo Station (1958), the fragile young paper-seller Qinawi (played by Chahine himself) is shunned by the woman he loves and has a violent breakdown; Qinawi’s guardian soothes him as he’s wrapped in a straitjacket, persuading him that it’s a wedding suit. In Darren Aronofsky’s devastating Requiem for a Dream (2000; based on Hubert Selby Jr’s 1978 novel), a Brooklyn housewife, her son and his friends become mentally and physically shattered through their respective drug addictions.

In the 21st Century, cinema does seem to be gradually opening up to broader, sensitive portrayals of mental illness. Maniac, with director Cary Fukunaga’s stated intention to “explore the human mind”, may be one sign of this. 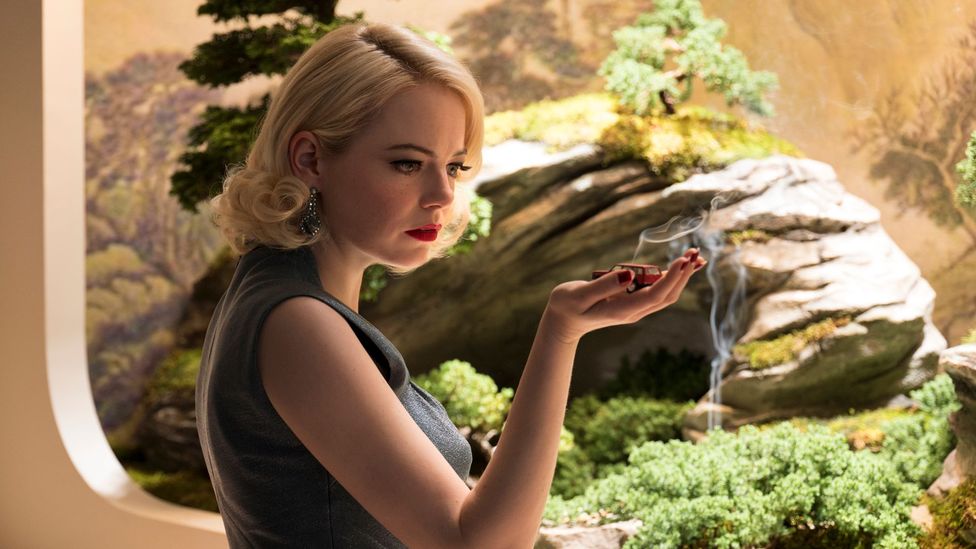 Emma Stone and Jonah Hill star in the upcoming Netflix series Maniac, which turns a pharmaceutical trial for a cure-all drug for mental illnesses into a thriller (Credit: Netflix)

The movies may be promoting and reflecting a heightened public awareness of mental health; the ‘madness’ still brings viewers close to our own vulnerability.