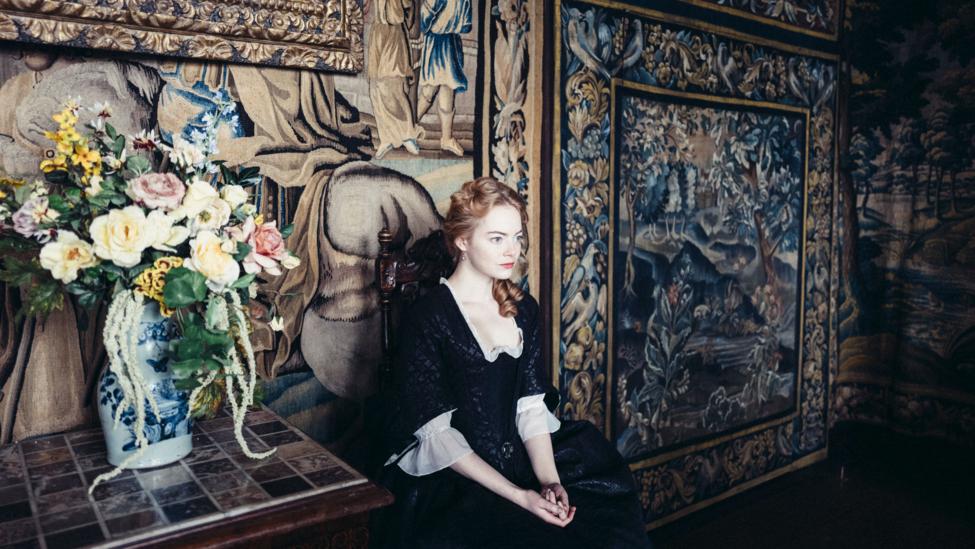 Yorgos Lanthimos’s The Favourite is a filthy, violent and outrageous period comedy that drips with bad language and worse behaviour, and will appal anyone who is expecting a more conventional royal drama. It’s also strangely touching.

Almost all of the film is set in the palace of Queen Anne (the ever-wondrous Olivia Colman) at the dawn of the 18th Century. The Queen suffers from gout – the only way to relieve the agony is to wrap her legs in slices of beef – and her stomach is so weak that she can’t eat a slice of cake without vomiting it up a moment later – not that that stops her. She still struggles out of her four-poster bed occasionally to talk to politicians and to play with her many pet rabbits, but the household – and the country – is essentially run by her childhood friend Sarah (Rachel Weisz), Duchess of Marlborough, the only person honest and / or cruel enough to inform her when her eyeshadow makes her look like a badger.

One of Sarah’s main duties is to referee the disputes between the Prime Minister, Godolphin (James Smith), and the foppish leader of the opposition, Robert Harley (Nicholas Hoult, who starred in About a Boy with Weisz and Hugh Grant, and who, in this role, appears to be morphing into Grant himself).

Godolphin wants to prolong the war with France, in which Sarah’s husband (Mark Gatiss) is fighting, while Harley argues that the country risks bankruptcy if it doesn’t sue for peace. But the palace (actually Hatfield House in Hertfordshire) doesn’t show many signs that money is tight. Every surface is covered in tapestries and paintings, toffs race ducks and lobsters along the marble halls, and the ballroom is given over to extravagant parties, featuring some of the most fabulously silly dancing since the heyday of Monty Python.

Not everyone is so well-off, though. Sarah’s cousin Abigail (Emma Stone, with a spot-on English accent) has fallen on hard times – her father gambled her away in a game of cards – so she makes the uncomfortable coach journey to the palace and begs Sarah for a job. Sarah permits her to work in the kitchens, but Abigail happens to knows which herbs will alleviate Anne’s aches and pains even more effectively than the beef treatment. This attractive, obligingly and seemingly honest young woman is soon rising through the ranks of the Queen’s servants and advisers – and it looks as if she could even replace Sarah as, yes, the favourite.

You might have some idea where this juicy tale of political and sexual intrigue is going, but the film bends every rule of the carriages-and-country-houses costume drama. Robbie Ryan, the cinematographer, lights it to resemble a Caravaggio painting, and sometimes uses a fisheye lens to stretch and warp the picture. The opulent dresses are on the border between 19th Century finery and 21st Century haute couture. The screenplay, by Deborah Davis and Tony McNamara, boasts some of the most waspish put-downs you’ll hear in a film all year, as well as some less-than-regal vocabulary. And the characters’ ambitions prompt everything from delicate bitchiness to outright brutality.

And yet, despite all of this, The Favourite is still believable. Lanthimos’s previous English-language black comedies, The Lobster and The Killing of a Sacred Deer, were both set in alternate realities where the attitudes and customs were slightly weirder and creepier than our own. But his latest and most ambitious film is always populated by human beings, rather than his usual alien androids. Nor does he forget how vulnerable the three central women are, or how many horrors they’ve had to get through to survive in a man’s world. The deft script and the universally superb performances ensure that Sarah and Abigail aren’t just one-dimensional schemers, but sympathetic individuals who keep growing and learning, and who keep fighting for what they think is best for Queen and country.

The Favourite is a treat as rich and luxuriant as any of Anne’s decadent cakes, and it could be mistaken at times for a particularly bawdy pantomime. But it’s ultimately a kind of tragedy. If its heroines could only work together instead of against each other, who knows what they might achieve?