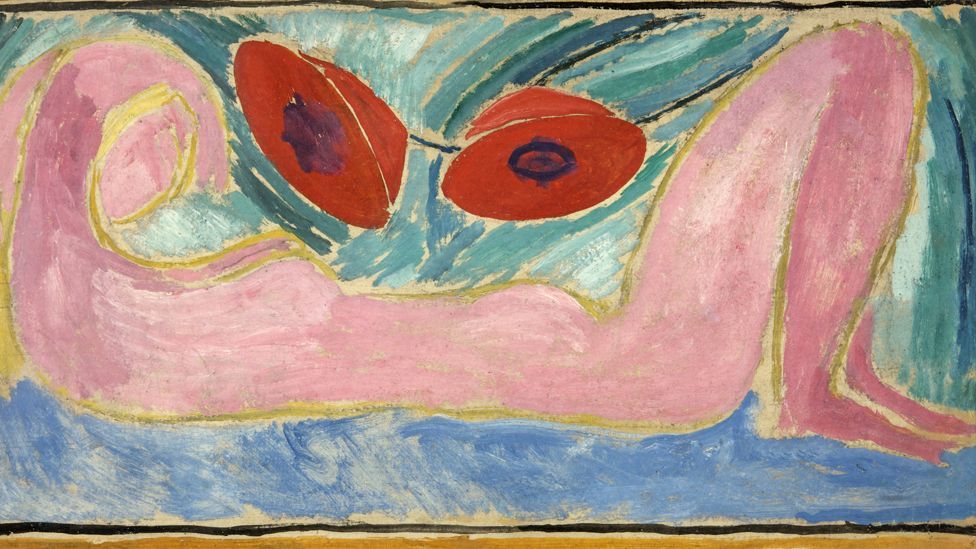 By Holly Williams 7th November 2018
The exhibition Modern Couples shows how artists and writers have been fluid in life, love, sex and creativity. Holly Williams explores some avant-garde threesomes.
B

Brangelina, Kimye, Hiddleswift… you could be forgiven for thinking the celebrity portmanteau name was an invention of the 21st Century. But today’s creative couples surely have nothing on the delightful ‘PaJaMa’: an amalgam of Paul Cadmas, Jared French and Margaret French, to reflect the interdependence of their relationship and artistic practice. From 1937 on, they lived as a polyamorous trio for 20 years. 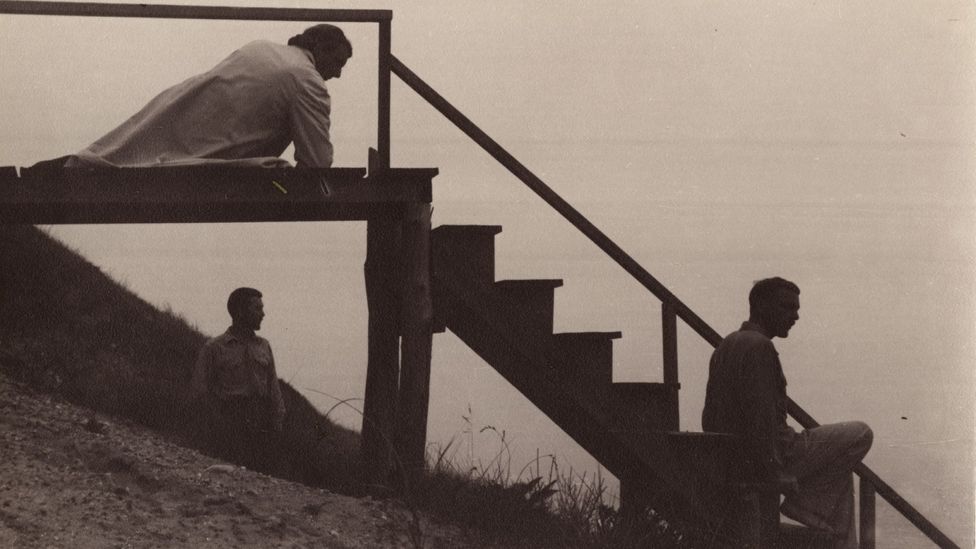 PaJaMa was the name of a trio of artists who were in a relationship with each other (Credit: Collection Jack Shear/ Gitterman Gallery New York)

PaJaMa is one of the fascinating , lesser-known stories in Modern Couples, a new exhibition at the Barbican in London. A collaboration with Centre Pompidou-Metz in France, the show refutes the notion of the solo – and let’s be honest, usually male – genius. Instead, it re-examines creative partnerships of the first half of the 20th Century to explore their symbiotic nature. Featuring more than 40 couples (narrowed down from a longlist of more than 200), it takes a wide-ranging look at how the artistic and literary experiments of the avant-garde were often also accompanied by experiments in living, and in loving.

But although it’s called Modern Couples, one of the striking things about the exhibition is just how fluid, porous, or expandable many of these relationships were. Actually, we’re often not talking about couples – but ‘throuples’. Two’s company, three’s an experiment…

We seem to be in an era that’s freshly questioning of conventional relationship structures, and more open-minded towards alternatives

“‘Couples’ is an elastic term,” the curator Jane Alison suggests. “And of course, three-way relationships are not easy, but there are a number within this exhibition.” Some form a cheerful – some a fraught – ménage à trois. Some come to quiet arrangements within existing marriages, while others espouse an open relationship as a radical, political act.

We seem to be in an era that’s freshly questioning of conventional relationship structures, and more open-minded towards alternatives. Or more nosey, at least: barely a day goes by without a new article about polyamory, ethical non-monogamy, or relationship anarchy. The language and terminology may be different, but many of the ideas are the same as those wrestled with – practically, romantically, creatively – by the 20th-Century avant-garde. 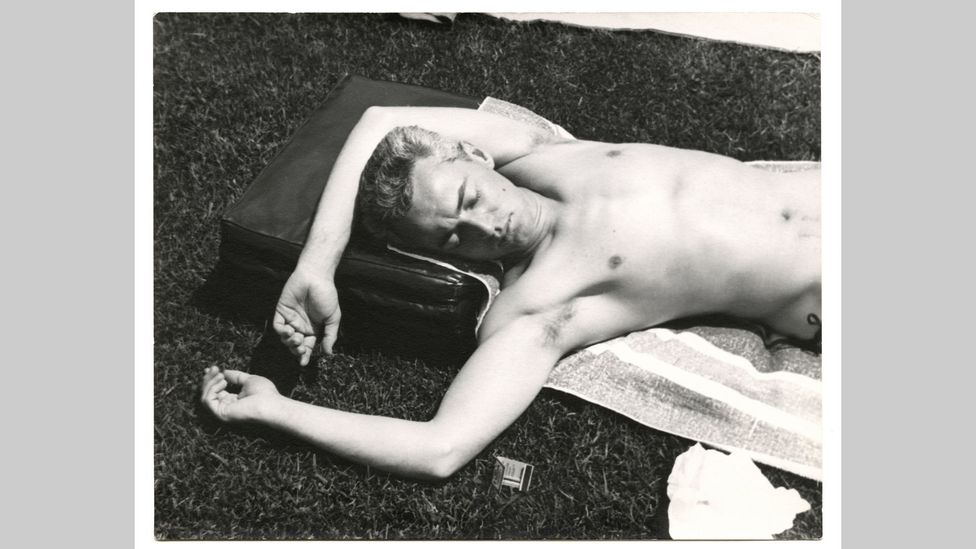 Stoneblosson, 1941, by PaJaMa, a portmanteau name to reflect the interdependence of the trio’s relationship and its art (Credit: Collection Jack Shear)

Back to PaJaMa. The trio met in New York City, at the Art Students League. Paul Cadmus – who painted stylised, muscular, sometimes homoerotic scenes – and Jared French, also a figurative painter in what was dubbed the ‘magic realism’ style, became lovers. Jared married Margaret in 1937 – and so began a new, fluid, three-way relationship that also found expression in jointly-made photographs.

Their work is associated with Fire Island, which runs south of Long Island, and which was already a gay enclave by the mid-1930s. The trio’s photographs are sometimes surreally playful, often moodily atmospheric, and always elegantly posed and poised. Long, lithe bodies drape on sand dunes or languish in the shallows; modesty is covered by driftwood, draped towels, or nothing at all. 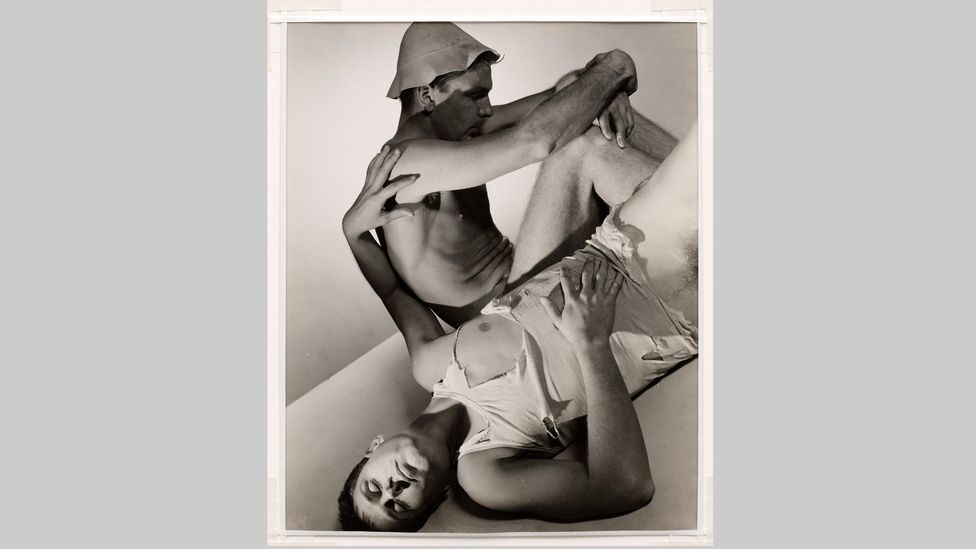 The strikingly modern, homoerotic work of Lynes has since made him a cult figure (Credit: 1937, Estate of George Platt Lynes/ Solomon R Guggenheim Museum, New York)

They shot each other, and their friends – but these carefully composed photographs were a private project, only shared among their circle, until discovered in the 1980s. “Art was the place where you could experiment,” Alison tells me at the show’s opening. “They were discreet, publicly, but were able to enjoy in their artwork this liberated space.”

Wheeler – director of publications at MoMa – was already in a relationship with Wescott – a successful novelist – when Lynes arrived on the scene in the 1920s. Their ménage à trois was not without its tensions: Lynes rather replaced Wescott in Wheeler’s affections – or in his bed at least, Wescott often the one that had to sleep alone. 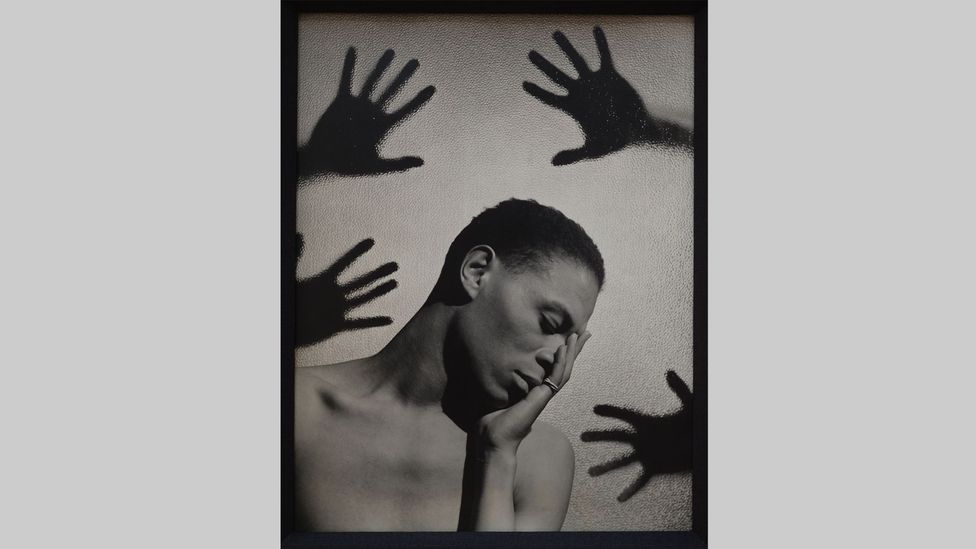 Wescott was also attracted to Lynes, but it wasn’t reciprocated. An extensive extract from his diary in 1937, reprinted in the show’s catalogue, conveys his “gnawing desire” for his lover’s lover, going into really rather extensive detail about Lynes’ penis.

Was it healthy or weird of Wheeler to encourage Wescott to explore all this in his writing? Readers benefitted, at least: “Wescott wrote this amazing book, The Pilgrim Hawk, which deals with his sexual frustration – Monroe Wheeler encouraged him to make his own experiences the subject of his work,” Alison explains.

In 1943, after 17 years, Lynes left the relationship – but Westcott and Wheeler endured, spending a total of 68 non-monogamous years together.

Elsewhere, openness in relationships was a political act. In Russia, the revolution extended to marriage: the need for sexual freedom and the liberation of women was part of some Marxist theories. Among avant-garde artists, monogamous marriage was deemed rather bourgeois. 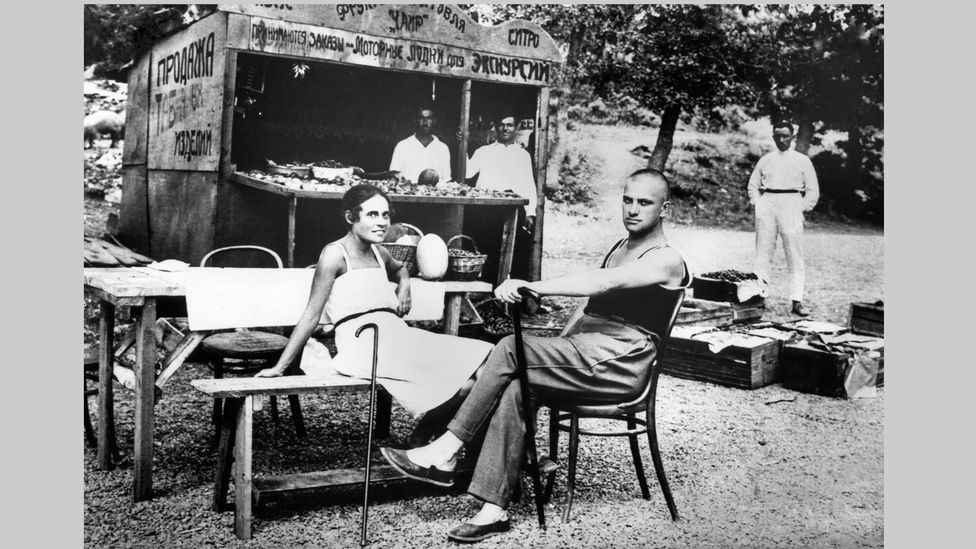 Lilya Brik and Vladimir Mayakovsky – Lilya and her husband Osip both fell in love with the poet, and their ménage à trois lasted 15 years (Credit: Getty Images)

So when Osip and Lilya Brik saw Vladimir Mayakovsky reading a poem at a party in 1915 – and both “fell passionately in love with him”, according to Emma Lavigne, director of the Pompidou-Metz – it was no disaster. Indeed, when Osip found out Lilya had slept with Mayakovsky, he’s reported to have replied: "How could you refuse anything to that man?" A writer and publisher, Osip would go on to champion the young poet’s work.

Mayakovsky eventually moved in, and their ménage à trois was public, and lasted 15 years – until Mayakovksy’s suicide in 1930, aged just 36 (Lilya divorced Osip later in the same year). Long-lasting though the relationship may have been, it was also tempestuous. All three had other lovers, and jealousy was an issue for the melodramatic Mayakovsky at least. Many of his poems were about, or dedicated to,  Lilya, but several show the strain: “What am I but/a cripple/infected/with love/A sort of/empty vessel/you can fill/with your shit,” he wrote in Pro Eto. Modern love was a little better mannered, perhaps, in Bloomsbury Square – but the interlocking creative and romantic relationships of the well-to-do Bloomsbury set were no less radical. 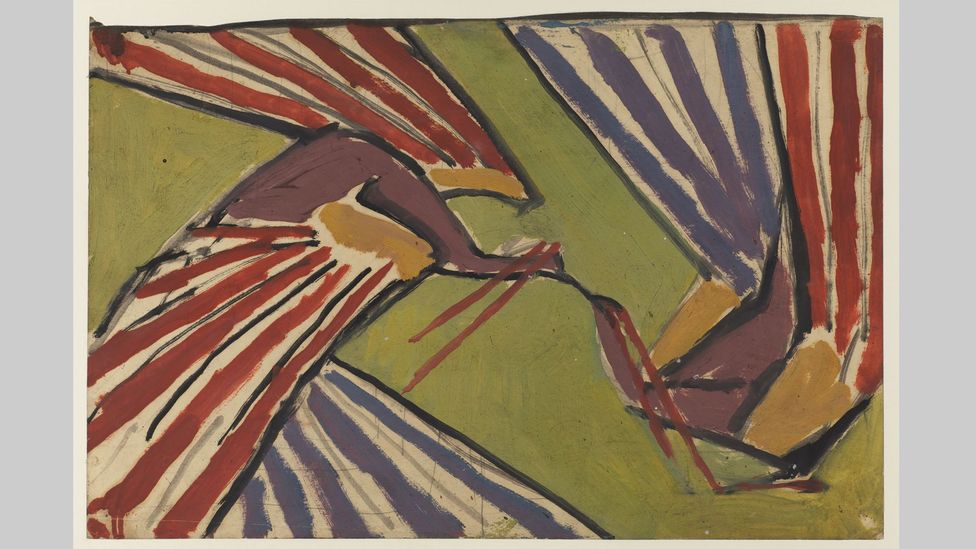 Design with confronted peacocks, 1913-14, by Roger Fry, one of the Bloomsbury group (Credit: The Samuel Courtauld Trust, the Courtauld Gallery, London)

Sisters Vanessa Bell and Virginia Woolf both fashioned their love lives into new forms – much as they did with painting and literature. Vanessa Bell married art writer Clive Bell in 1907 and they had two children, but although their marriage foundered and both had other relationships, they never divorced, and remained much in each other’s lives. Clive organised two influential Post-Impressionism exhibitions with art historian Roger Fry, who – at the same time – was having an affair with Vanessa. Fry, Vanessa and the painter Duncan Grant then formed the Omega workshop in 1913, making furniture, fabric and ceramics in bright, bold Fauvist colours and patterns.

Duncan Grant, although he fathered a child with Vanessa, generally preferred men

Vanessa’s affections moved to Grant, and together they moved to Charleston, a farmhouse in Sussex which they turned into a living artwork, painting every available surface. Their artistic collaboration was long-lasting, even if their sexual union was more fleeting: Grant, although he fathered a child with Vanessa, generally preferred men. His lover, David ‘Bunny’ Garnett, joined them to live in Charleston. 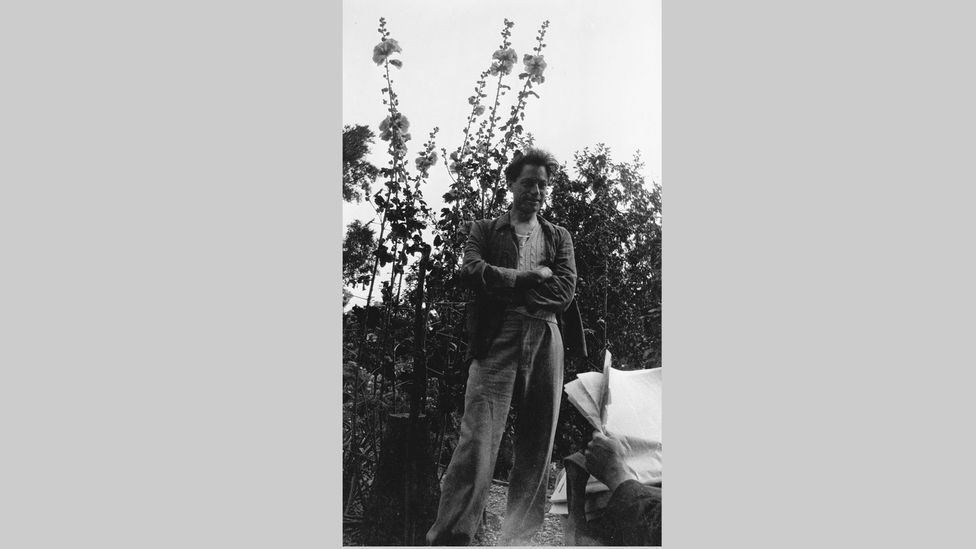 The painter Duncan Grant lived in a ménage a trois with Clive and Vanessa Bell at Charleston, a farmhouse in Sussex which they turned into a living artwork (Credit: Getty Images)

The farmhouse was a hub for the Bloomsbury group over the years: Fry designed a studio space there; another of Grant’s lovers, the economist Maynard Keynes, lived there for a spell, and Clive Bell had his own room. Illegitimacy still being scandalous, Clive even claimed parentage when Angelica, Vanessa’s child by Grant, was born in 1918 – problematically, in the long run, when Angelica fell in love with Bunny Garnett, unaware he had been her real father’s former lover.

As an experiment in living, then, Charleston was not without its difficulties – but it was a site for enormous creativity, and mostly a very happy home. “It seems to me the only really successful family life I’ve ever seen,” wrote Fry to Vanessa in 1926, “which ought to be made known to all those good people who think that family life depends on the sanctity of marriage.” 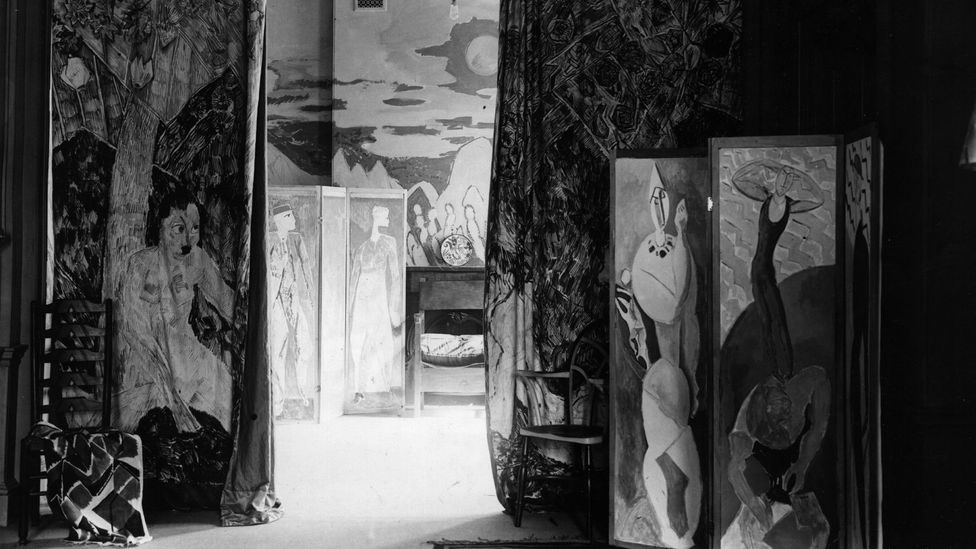 The Woolfs – Virginia and her husband Leonard – were frequent visitors, and another unconventional couple. His support was important creatively: Leonard helped Virginia cope with the difficult birth of each new book, her mental health issues flaring as she neared publication. The pair also set up the Hogarth Press in 1917; Virginia set the type, while Leonard managed the inks and printing. It wasn’t just a home for Virginia’s work, but also for his writing, among other seminal texts: they published Freud, and TS Eliot’s The Waste Land.

Their marriage was loving and affectionate – although thought not to have been a ‘success’ in the bedroom, Virginia struggling with sexual intimacy having been abused by her half-brothers as a child. But it was also open: Virginia had a brief but significant involvement with the writer and garden designer Vita Sackville-West, which Leonard knew about and tolerated.

While there’s speculation over the exact nature of the women’s relationship, it seems likely it was sexual and certainly romantic, the pair writing teasing yet yearning letters. “I am reduced to a thing that wants Virginia,” wrote Sackville-West in 1926.

Nude with Poppies, 1916, by Vanessa Bell, one of the Bloomsbury group whose creative and romantic relationships were famously unconventional (Credit: Swindon Art Gallery)

Virginia, meanwhile, immortalised Sackville-West in 1928 in her fantastical novel Orlando, about a young poet who lives for three centuries, turning into a woman part way through. It was set in a country house based on Sackville-West’s own pile, Knole, and featured illustrations of her and her ancestors – hardly subtle, and yet their bisexuality wasn’t sniffed out at the time. With its gender fluidity and lesbian origins, Orlando has since become an iconic queer text, seen as the fruit of a very modern couple. Or should that be a very modern trio?

Modern Couples is at the Barbican, London, until 27 January 2019.