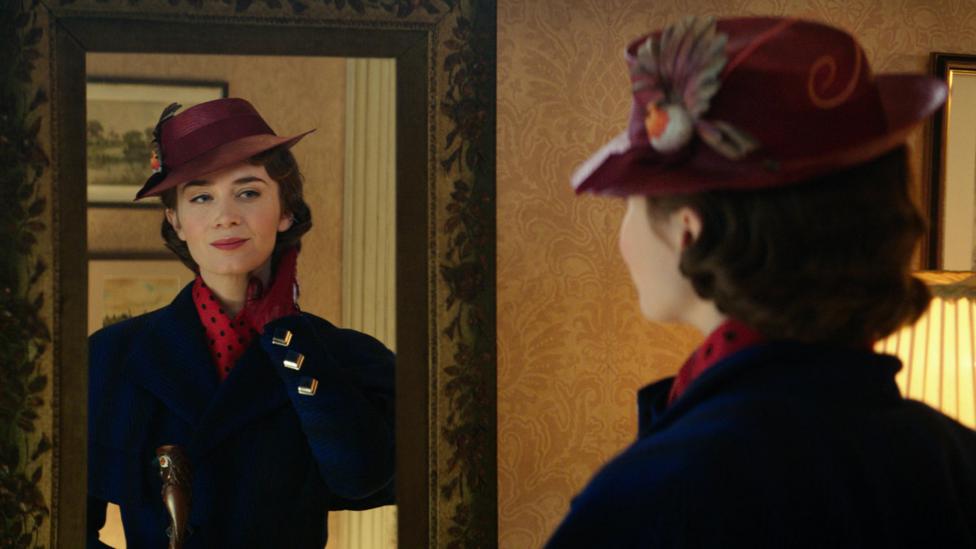 How do you make a sequel to one of the most beloved live-action children’s films ever? For several decades, the answer was: you don’t. Mary Poppins was released in 1964, but even though the source novel’s author PL Travers wrote seven further books about the Banks family’s magical nanny, no one attempted to follow a film that was, to use Mary’s own phrase, practically perfect in every way.

In the 21st Century, however, there is no intellectual property that can’t be rehashed or rebooted, and so, at last, Mary Poppins Returns. Rob Marshall, director of the Oscar-winning Chicago, is in charge, the screenplay is by David Magee and Emily Blunt is the brave soul who has taken on the role that helped make Julie Andrews a superstar.

Sensibly, Blunt doesn’t impersonate Andrews. Less sensibly, she impersonates Maggie Smith: her haughty, upper-crust Mary would be right at home in Downtown Abbey. But otherwise, Mary Poppins Returns is so similar to its predecessor as to be almost identical. There are no revelations, no unexpected locations, no hints at what Mary gets up to when she isn’t looking after the Banks children – although we’ll probably get a prequel set in nanny-training college in a few years’ time. The only significant difference is that the story has been moved on from 1910 to the 1930s, so it’s Mary Poppins: The Next Generation.

Michael and Jane, the children Mary cared for in the first film, are now adults played by Ben Whishaw and Emily Mortimer. Michael is still living in the enviable property that the Banks family occupied last time around, with a park across the road and a retired admiral for a neighbour. But Michael’s wife died after a long illness, and, to make matters worse, he funded her treatment by borrowing money from the grand Fidelity Fiduciary bank where his father used to work. If he can’t repay the loan within a week, he and his three children will be evicted, and the Banks’ house will be the bank’s house.

This is Mary Poppins’ cue to float down from the sky with her carpet bag and her talking umbrella to take the children out and about in London while Michael and Jane search for the share certificate which might just save them from homelessness. This ticking-clock scenario makes the film slightly gloomy: even when Mary and the children are dancing with cartoon penguins, we’re always aware that the Banks family is on thin ice.

Yes, there are cartoon penguins: two-dimensional, hand-drawn cartoon penguins, just like the ones from 1964. In general, every character and every sequence in the new film echoes a character or a sequence from the old one. But the film-makers come up with inspired variations on these familiar themes. Instead of a chimney sweep played by Dick Van Dyke, there’s a lamplighter played by Lin-Manuel Miranda, the creator of Hamilton. Instead of a song about flying a kite, there’s a song about holding a balloon. Instead of jumping into a pavement drawing, the characters jump into the glaze on a porcelain bowl. Instead of visiting an uncle of Mary’s who floats up to the ceiling, they visit Mary’s cousin Topsy (Meryl Streep) who stands on the ceiling when her house flips upside down.

It may lack a spark of originality, but it’s better than most children’s films

It’s cleverly done, but the film might have felt more worthwhile if it had anything in it that wasn’t a blatant imitation. And, as delightful as much of Mary Poppins Returns is, it isn’t quite as delightful as it was the last time we saw it. The songs by Marc Shaiman and Scott Wittman are sprightly, sweet and carefully crafted. And perhaps, once we’ve heard them a hundred times, they will eventually sound like classics. But on first listen, I wasn’t convinced that any of them beat A Spoonful of Sugar, Let’s Go Fly a Kite or Supercalifragilisticexpialidocious.

The same goes for the actors. I could have done without Julie Walters’ bustling housekeeper – we see enough of her in the Paddington films – but otherwise the cast could hardly have been better. But, of course, it was better five decades ago. Blunt is superb: with a wistful faraway glance here and there, she conveys the essential loneliness of a character who stays with families when they are unhappy and leaves when they are happy again. But she doesn’t have the indomitable confidence, the twinkling warmth or the pristine singing voice that Andrews had. And, strangely for an English actor, her vowels sometimes drift off across the Atlantic. Similarly, Miranda, a Broadway legend in his own right, seems half-asleep compared to the effervescent Van Dyke – and his Cockney accent isn’t much more accurate than Van Dyke’s was, either.

Perhaps the film-makers should have gone for a training college prequel, after all, rather than copying a masterpiece they couldn’t hope to match. But it’s no surprise that Mary Poppins Returns doesn’t reach the highest heights of Mary Poppins: the surprise is how close it gets. A lively, colourful and big-hearted musical, it may lack a spark of originality, but it’s better than most children’s films. It’s just not as good as the children’s film it is trying so hard to be.