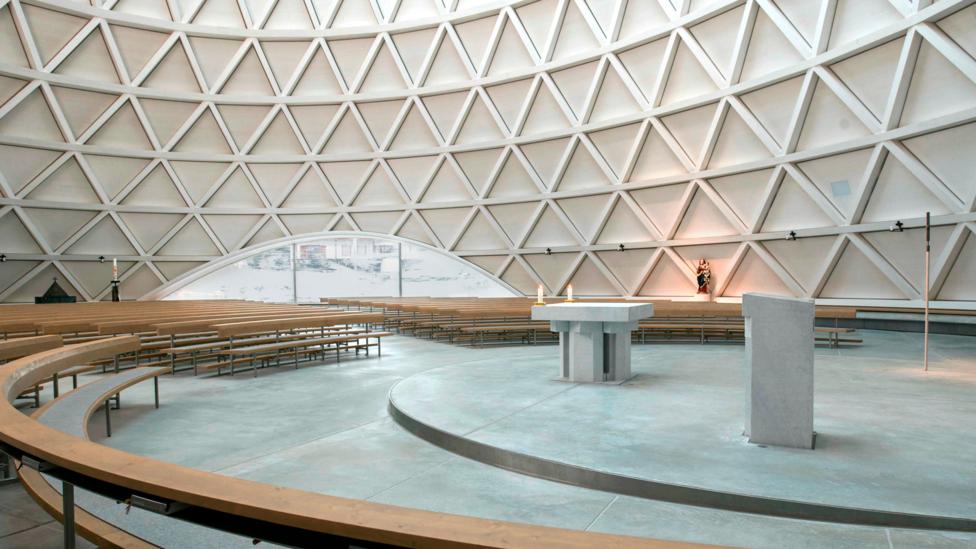 The end is evidently in sight. Throughout 2018, work has progressed on the reconstruction of Berlin’s very-nearly completed Stadtschloss (City Palace). For generations, this grandiloquent and essentially 18th-Century Baroque palace has been little more than a hazy memory. Eviscerated by Allied bombing during World War Two, in 1950 what remained of it was obliterated by the East German government. 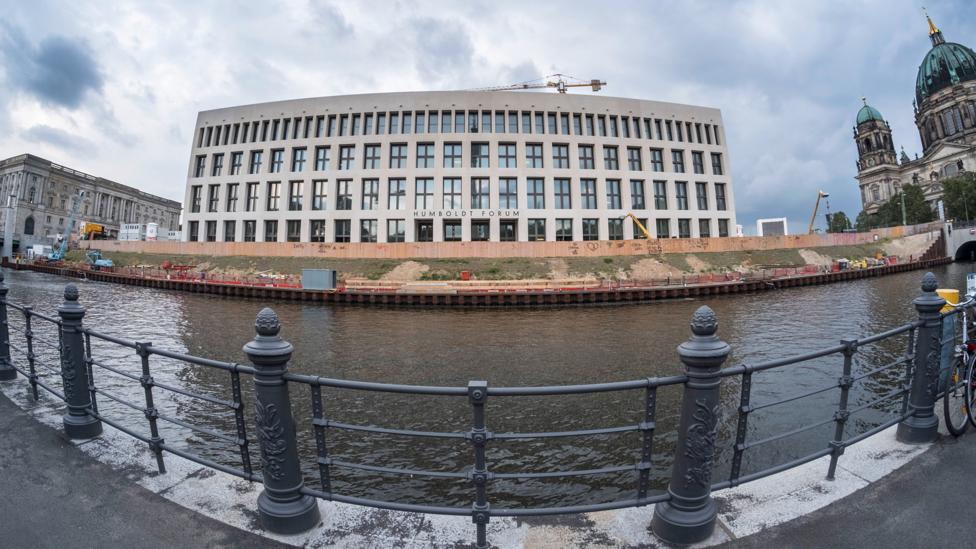 The very-nearly completed Stadtschloss in Berlin has been extended, merging traditional and modern (Credit: Getty Images)

Now, here it is again, all stone and marble, its walls pregnant with Baroque but with a distinctly modern style. Born again, the Stadtschloss – once home to princes, kings and warring emperors – is intended to be both traditional and modern.

Will this new-era national museum and cultural institution be all things to all Berliners; all Germans? Time, of course, will tell. This monumental building is, however, one means of bridging the divide between traditional and modern sensibilities.

Museums, though, are often buildings through which architects explore new creative avenues and 2018’s collection is no exception. In Helsinki, JKMM Architects have dug the new and privately funded 50m-Euro Amos Rex art museum beneath what was a city-centre bus station and, originally, a military parade ground. Cavernous interiors, bright with daylight, are expressed above ground through sculptural skylights that double up as skateboard runs and posing platforms for selfies. 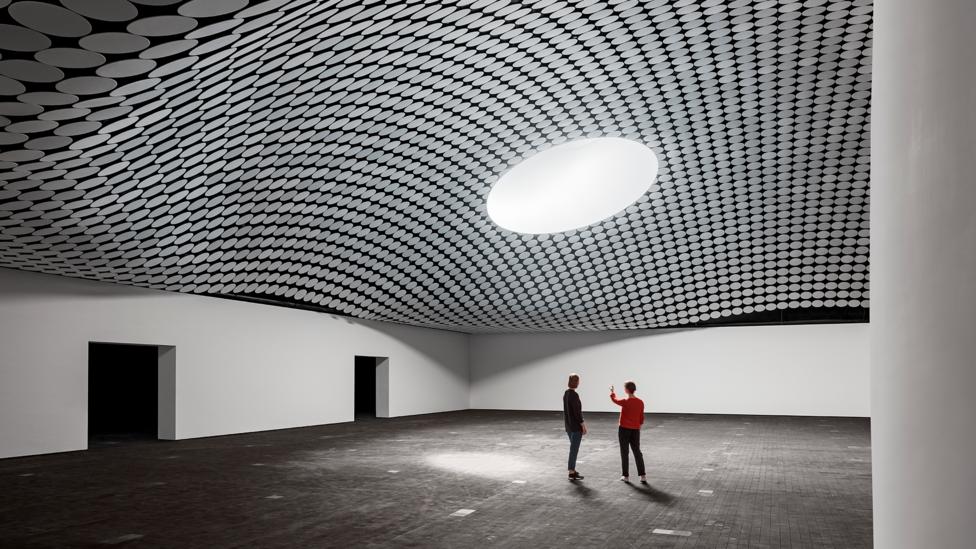 The museum surfaces through the lobby of a handsomely restored 1930s cinema, shopping and restaurant complex.  Imaginative yet well mannered, Amos Rex is a properly Finnish response to the idea of a new city-centre art gallery. It is also the polar opposite of a plan – since scuppered by the City of Helsinki – for a blockbuster Guggenheim museum that was to have been parachuted onto Helsinki’s harbourfront in the wake of an international design competition.  The scheme was as appropriate for the Baltic city as a Baroque Prussian palace would be for Casablanca.

But, while Helsinki is a city rich in art, culture and architecture – old and new – Dundee in Scotland has felt the need for a highly visible new cultural building on the city’s long-neglected Tayside waterfront. Opened in September, the V&A Dundee, an off-shoot of London’s Victoria & Albert Museum, is certainly striking. Its craggy concrete structure, formed of what appear to be two inverted pyramids or the hulks of great ships washed up on the shore, is, says its Japanese architect Kengo Kuma, influenced by Scottish cliffs. 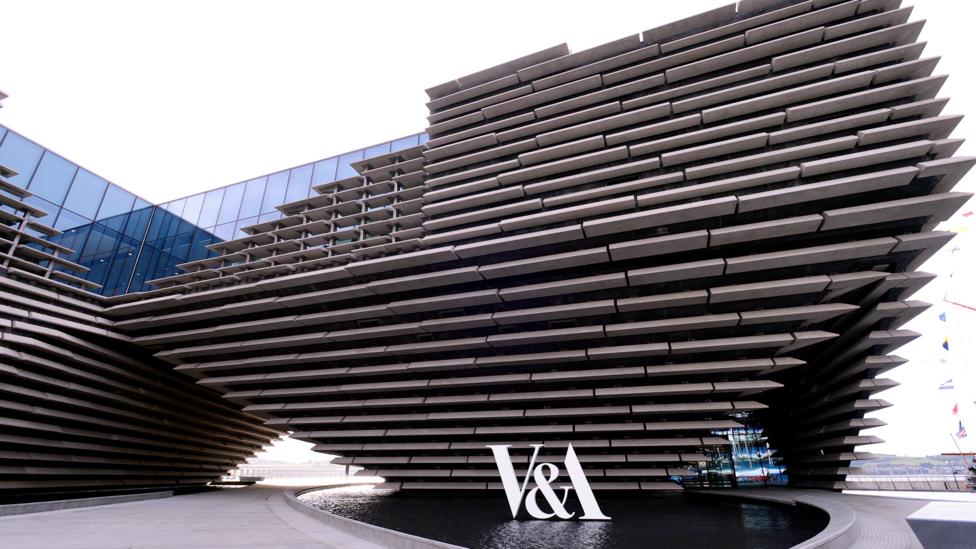 The striking design of the V&A Dundee was influenced by the Scottish cliffs (Credit: Getty)

In its own way, the V&A Dundee belongs to its host city as Amos Rex does to Helsinki. In both cases, innovative architecture works with rather than against the grain of its setting and this is something we have begun to see more of worldwide in 2018, despite increasing pressure to build crudely and insensitively in the rush to maximise profits from buildings’ sites.

Back to the future

One way of maximising social profit is the re-use and renovation of time-worn municipal projects. For years, a death threat had hung over Preston Bus Station in Lancashire, UK. While councillors and developers belittled this increasingly admired brutalist design of the late 1960s by Keith Ingham and Charles Wilson of Building Design Partnership, others saw its architectural and civic qualities. 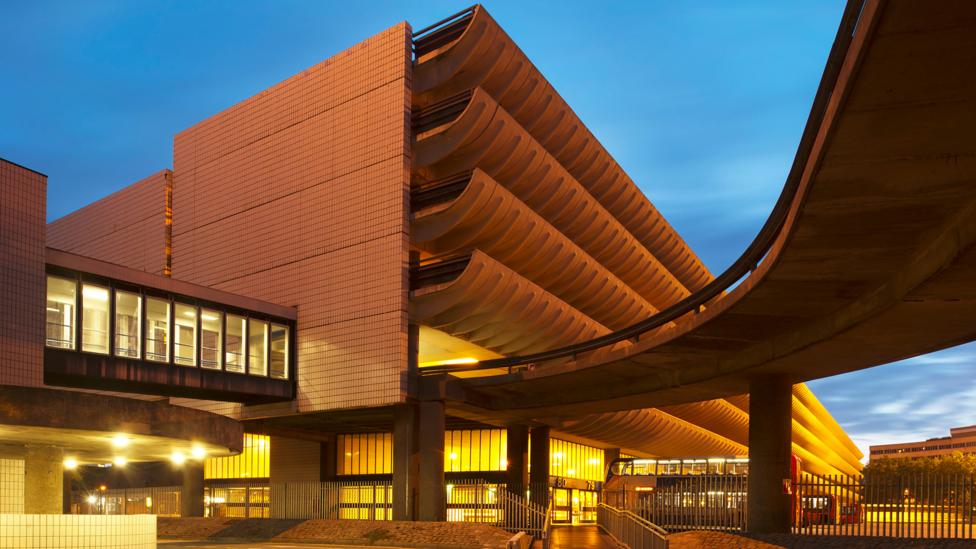 The brutalist Preston bus station has been revived (Credit: Getty)

Happily, this characterful Grade II-listed civic complex has come back into its own, as a revived bus station – stripped of private sector tat that had accrued over the years – and a dream for film-makers looking for that perfect 1960s setting. Throughout, it’s a meticulous and thoughtful renewal and remodelling where necessary. John Puttick Associates have demonstrated how civic buildings that the public has paid for deserve more than their usual fate of being turned into yet more shopping centres. 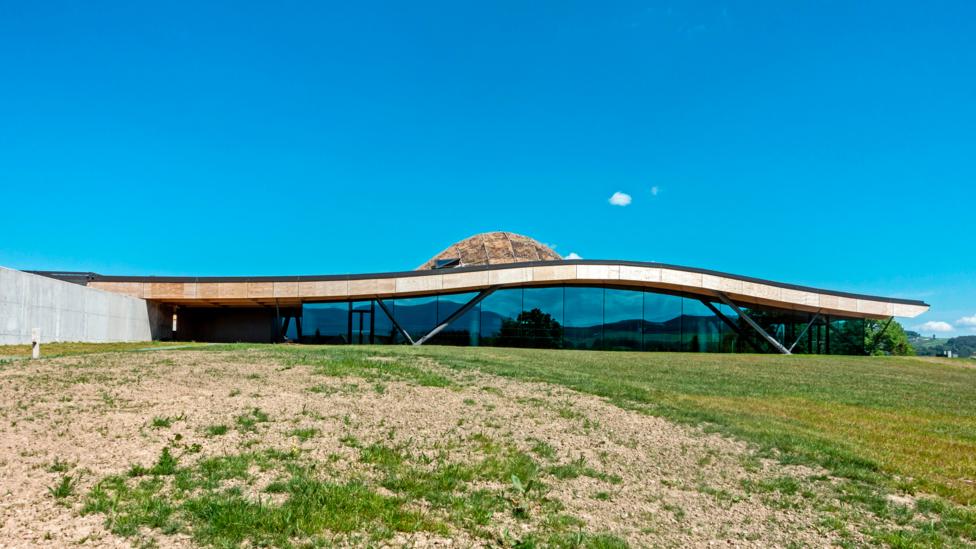 The Macallan whisky distillery has an undulating timber roof and blends in with the landscape (Credit: Alamy)

In the countryside it has been perfectly possible, as 2018 proves, to site or even to merge large-scale new buildings into landscapes that gain rather than lose through architectural intervention. On the magnificent Easter Elchies estate in the Scottish Highlands, Rogers Stirk Harbour + Partners have designed a new Macallan whisky distillery and visitor centre. It sits under a stealthily ambitious undulating timber roof that, covered with a wildflower meadow, reads as part of the Speyside landscape.

This is a fine-spun yet spirited building

Inside, and under five artificial hillocks, the gleaming copper whisky stills perform their sorcery in a setting at once cave-and-cathedral-like. With its complex curves and ingenious tracery, the timber roof is a triumph of craft meeting computing, its 380,000 individual elements adding up to a warm and magical whole. This is a fine-spun yet spirited building, a match for the famous wee drams it distils for export worldwide. The wooden St Josef church in Bavaria is reminiscent of an alpine panorama (Credit: Alamy)

Two beautiful new places of worship – one in Bavaria, the other on the Argentinian pampas – show how spirituality, landscape and architecture can enfold their wings around one another and take imaginative flight even when money is tight. St Josef, Holzkirchen, designed by the Munich architect Eberhard Wimmer, is formed of two elliptical cones – a weekday chapel and feast-day church, the former 11m high, the latter 22m – joined by a glazed and flat-roofed walkway.

These twin peaks, influenced by Holzkirchen’s alpine backdrop, are fabricated from spruce, larch and beech wood, their snow-white interiors glorious interplays of geometric structural patterns, winding and weaving their way up to skylights that cast ever-changing plays of light and shadow over seats, walls and altars. White, numinous, ultra-modern and wholly elemental, St Josef’s seems charged with alpine air rather than incense. 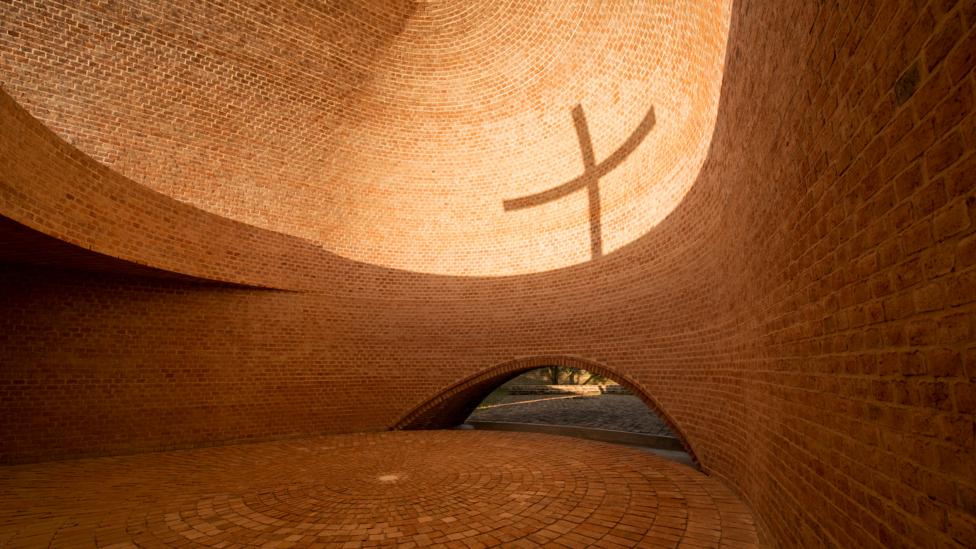 The Capilla San Bernardo in Argentina is made of salvaged farmhouse bricks (Credit: Nicolas Campodonico)

The Capilla San Bernardo, secreted on an estancia some 200km southeast of Córdoba, came to international attention this year. Designed by the Rosario architect Nicolás Campodonico and made of salvaged farmhouse bricks, its curved western wall is cut away to allow the setting sun to light an interior of utter simplicity. As it does so, the silhouette of a cross appears as if branded into warm brickwork. Sunlight and simple, soulful architecture rekindle Christ’s cross each evening while celebrating the daily journey of the sun across the hemisphere, as people of all cultures and creeds have done for millennia.

In central London, Gianni Botsford has brought daylight into both the bright ground-floor kitchen-living room and the hidden depths of his House in a Garden, an exercise in how an ingeniously designed and beautifully resolved house can bloom on the most unpromising city site. Chutes direct daylight down into a subterranean bedroom floor that feels anything but underground and to a swimming pool further below, it too caressed by daylight. 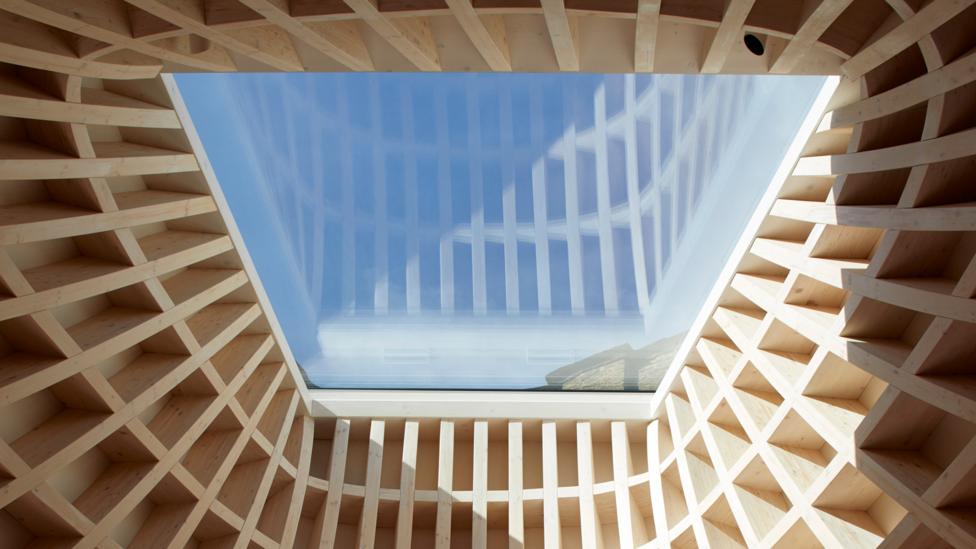 House in a Garden is an inventive residence in London full of light (Credit: Edmund Sumner/ Gianni Botsford)

Although hidden in a way that Berlin’s domed Stadtschloss is very obviously not, the House in a Garden is crowned with a glorious timber and copper-capped roof curved up and askew in order to best capture daylight through a skylight. This is a special house shaped over many years and, yet, it points a way to a future generation of homes not just in cities but in towns and villages, too, making optimum and intelligent use of ‘brownfield’ sites. Sprawl and new housing estates devouring fields, meadows and entire rural landscapes might yet be contained if those with the power to commission them would only stop and think – and even dare to dream – before they build in years beyond 2018.