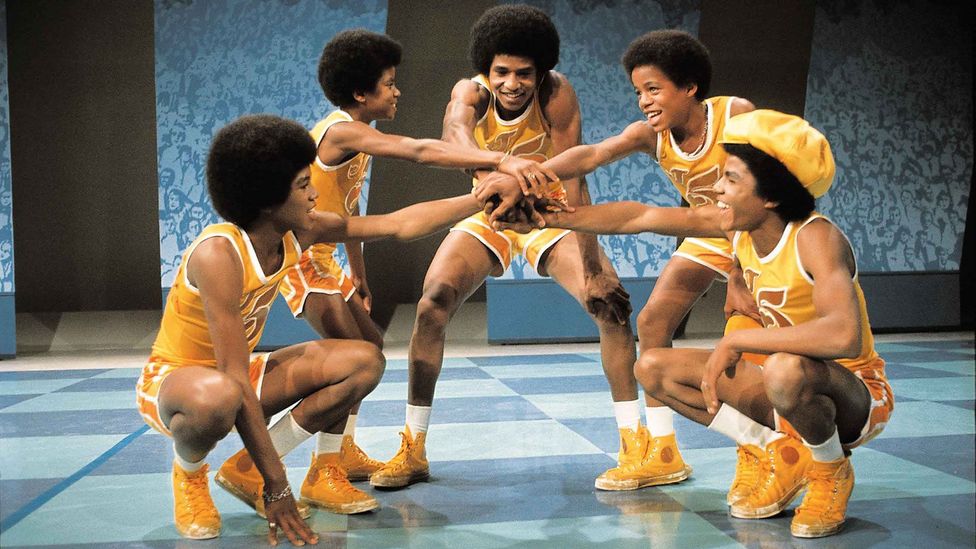 By Arwa Haider 9th January 2019
Sixty years ago, Berry Gordy set up the hit factory of Motown. Arwa Haider looks at how an independent record label created one of the most influential sounds of the 20th Century.
O

On 12 January 1959, the music sensation that changed America – and the world beyond it – was set in motion. Detroit-born 29-year-old Berry Gordy founded Tamla Records with an $800 loan from his family’s collective savings. By the following year, he’d merge this into the Motown Record Corporation: an independent empire that would seal its genuinely iconic status, introducing legends including The Jackson 5; Diana Ross and The Supremes; Stevie Wonder; Smokey Robinson; Marvin Gaye; Martha and The Vandellas; The Commodores and many others among its hundreds of signings. 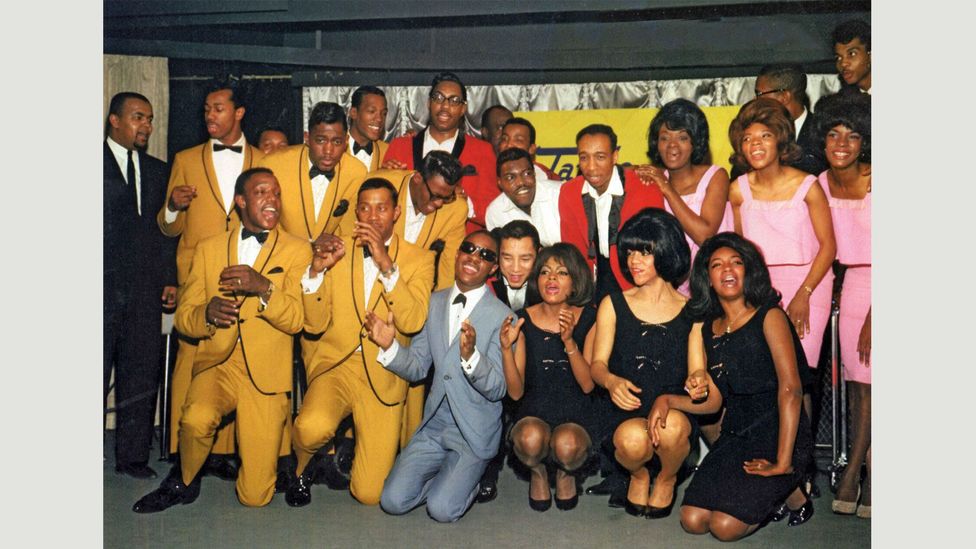 The Temptations, The Miracles, Stevie Wonder, Martha and the Vandellas and The Supremes at EMI Records in March 1965, for the UK launch of the Tamla Motown label

Sixty years on, Motown’s classic catalogue remains ubiquitous and influential: forming a blueprint for modern soul and pop successes, from girl groups to hit singer-songwriters; sampled on countless hip hop and dance anthems and covered by acts of every genre. On its anniversary, the music is celebrated in the book Motown: The Sound of Young America by Adam White with Barney Ales (Thames & Hudson) – filled with rarely seen and previously unpublished photos.

More like this:
- How LSD influenced Western culture
- The making of an iconic song
- Taiwan’s eerie sonic weapon

The ‘Motown Sound’ is unmistakeable for its glorious melodies and killer hooks; the Motown spirit – as embodied by the vivacious, tenacious Gordy himself (now 89) – is exceptional, even if the label is no longer independent (it’s currently part of Universal Records). Motown’s name was rooted in industry and community: a nod to the ‘Motor Town’ nickname of its native city. Prior to founding the label, Gordy had also worked on production lines at the Lincoln-Mercury car plant. He set up the label’s base in a modest two-storey house at 2648 West Grand Boulevard, also known as Hitsville USA. 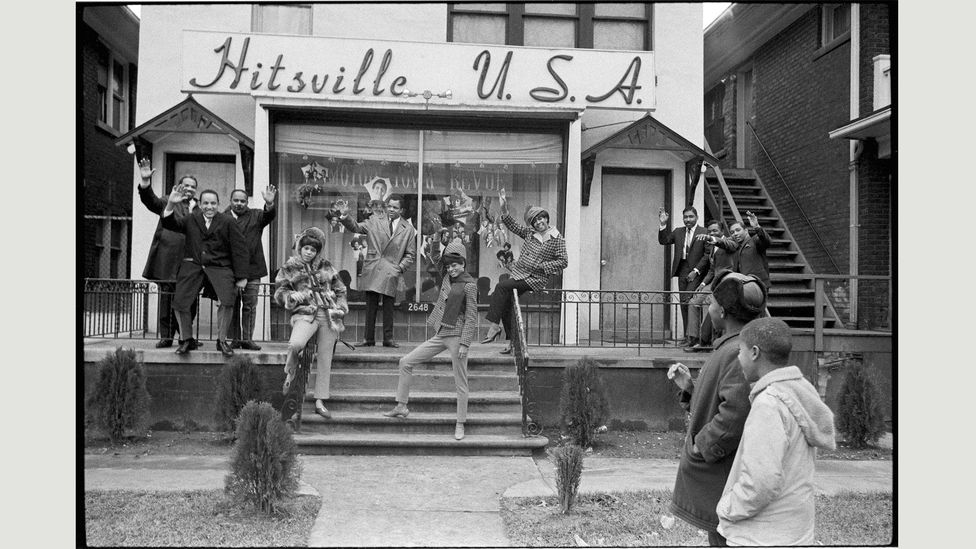 With The Supremes, Berry Gordy hails members of the Motown house band, left, and his Holland-Dozier-Holland hitmakers in 1965

“The ‘Hitsville’ sign over the door let it be known that if you set foot inside you were expected to sing, dance, write, produce, sell or manage,” explained Gordy in his 1994 autobiography, To Be Loved. “That name kept our mission in focus.” 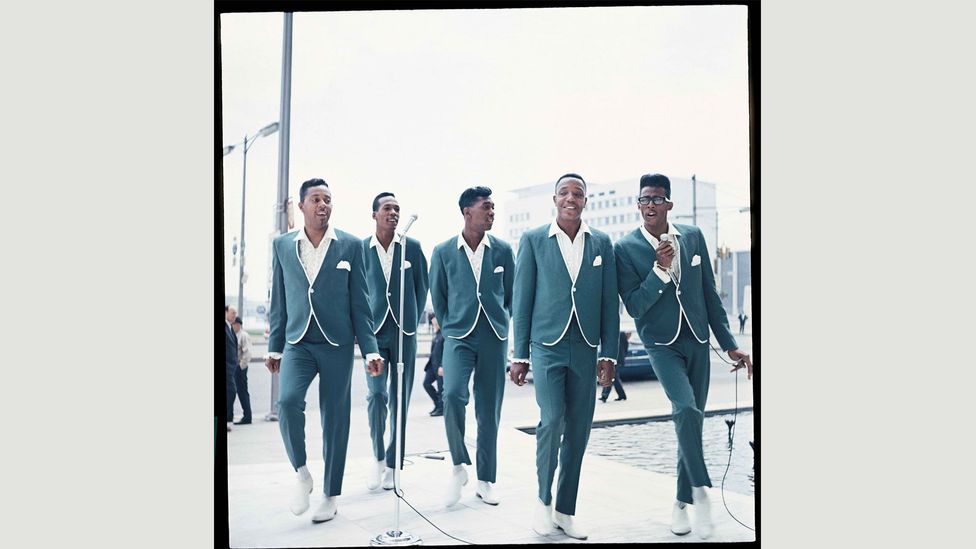 Motown was always a serious business, fuelled by the sweetest sounds. Gordy’s musical vision was intensified after various thwarted ambitions; he’d previously launched an unsuccessful record store, and while he’d had some songwriting/producing success (penning Reet Petite among other tracks for Jackie Wilson), the returns were paltry. Before Motown, Gordy had signed deals for two singles by rising R&B stars The Miracles, featuring a young Smokey Robinson – only to receive a royalty cheque for just $3.19. Robinson reportedly told Gordy: “You might as well start your own record label; I don’t think you could do any worse than this.” 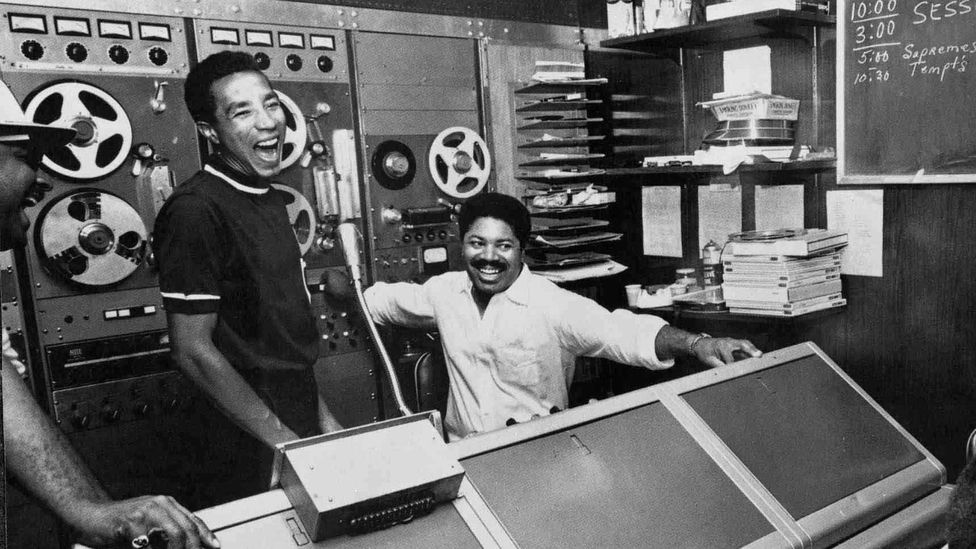 The Miracles would become Motown’s first million-selling recording artists. The first of scores of Motown number one singles was delivered by teen girl group The Marvelettes: 1961’s Please Mr Postman had Gladys Horton on lead vocals and backing from Motown’s ultra-sharp house band The Funk Brothers (including Marvin Gaye on drums); like countless Motown gems, it would also inspire major cover versions – in this case, by the likes of The Beatles and The Carpenters.

By 1967, Motown’s success was booming; Fortune magazine ran a feature about “The Motown Sound of Money”, with writer Stanley H Brown highlighting “Gordy’s ability to build and direct a highly sophisticated enterprise… to release hit records almost as a matter of course, and to do the job in a firm, businesslike manner without interfering with the creative flow.” 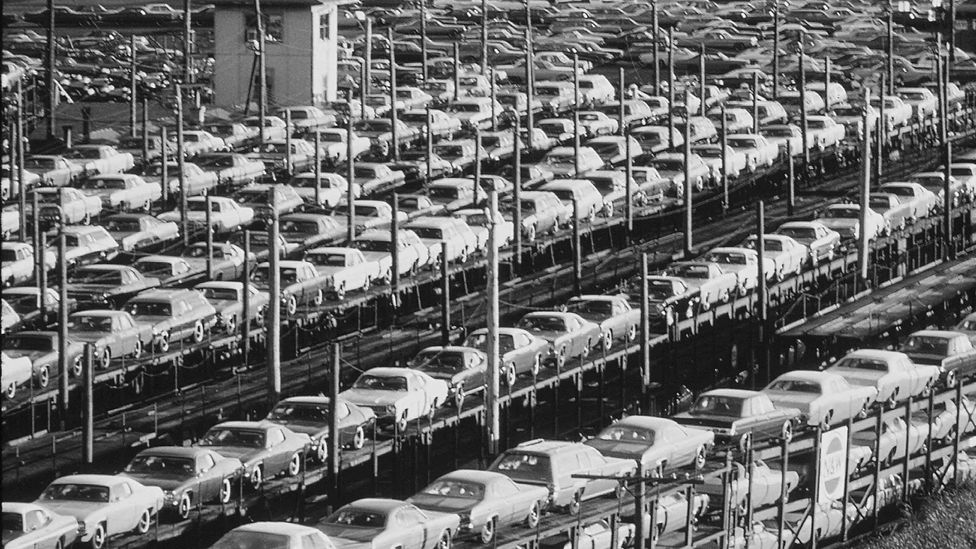 Motown was also powerfully significant as a black-owned corporation employing multi-racial staff within its label teams; in an era when America was undeniably divided and the mainstream was an exclusionary zone (in 1967, the Detroit riots also erupted in response to police raids in black neighbourhoods), Hitsville produced music as a vital, unifying life force.

I wanted songs for the whites, blacks, the Jews, Gentiles… I wanted everybody to enjoy my music – Berry Gordy

“I wanted songs for the whites, blacks, the Jews, Gentiles… I wanted everybody to enjoy my music,” Gordy told The Telegraph newspaper in 2016. This might have been savvy attitude from a seasoned entrepreneur who fashioned Motown as “the sound of young America” – but it was also key to why the label’s spirit was so ground-breaking. Its musical themes were instantly relatable (Gordy would also describe the Motown sound as “rats, roaches, soul, guts and love”), and its songs demanded universal audiences. 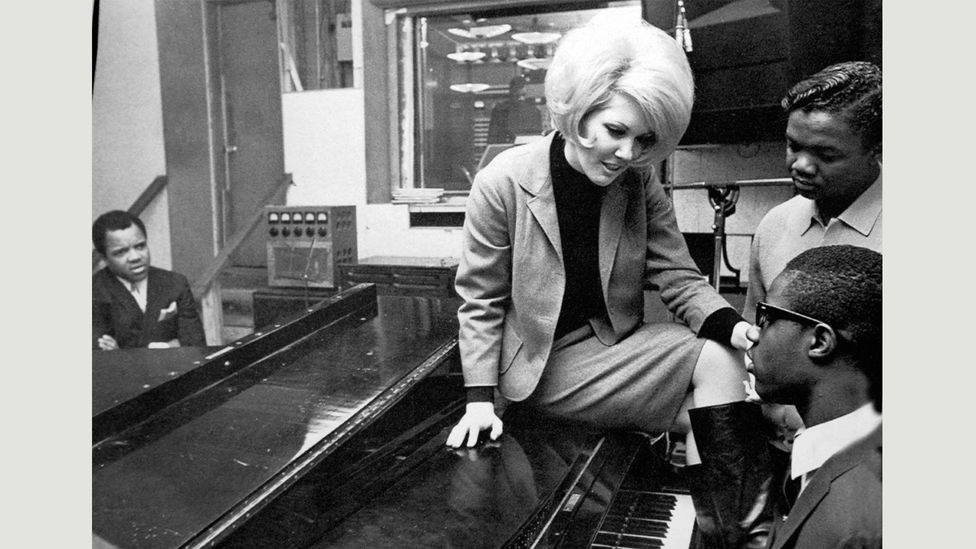 Chris Clark in the studio with Berry Gordy, Lamont Dozier and Stevie Wonder

Even the Motown production philosophy had a ring to it (“KISS – Keep It Simple, Stupid”); in fact, every detail was fine-tuned, from the songwriting teams such as powerhouse trio Holland-Dozier-Holland (Heat Wave; Where Did Our Love Go; Stop! In The Name Of Love; Baby Love) and the sublime partnership of Ashford and Simpson (Ain’t No Mountain High Enough; You’re All I Need To Get By) to the moves (thanks to “finishing school” teacher Maxine Powell and choreographer Cholly Atkins) that gave its talented artists such distinctive poise. The joyous immediacy of the songs also had a galvanising effect, as vocalist Martha Reeves recalls in Susan Whitall’s book, Women Of Motown:

“It was a beautiful feeling, when we were so full of hate and anger and everybody was so full of unrest, that we saw people actually join together, get out of their cars and dance to a song [Martha And The Vandellas’ 1964 smash hit Dancing In The Street] that meant we should rejoice… The Motown sound was a very big influence in the civil rights movement. It was not that we marched or paraded; we just promoted it through love.” 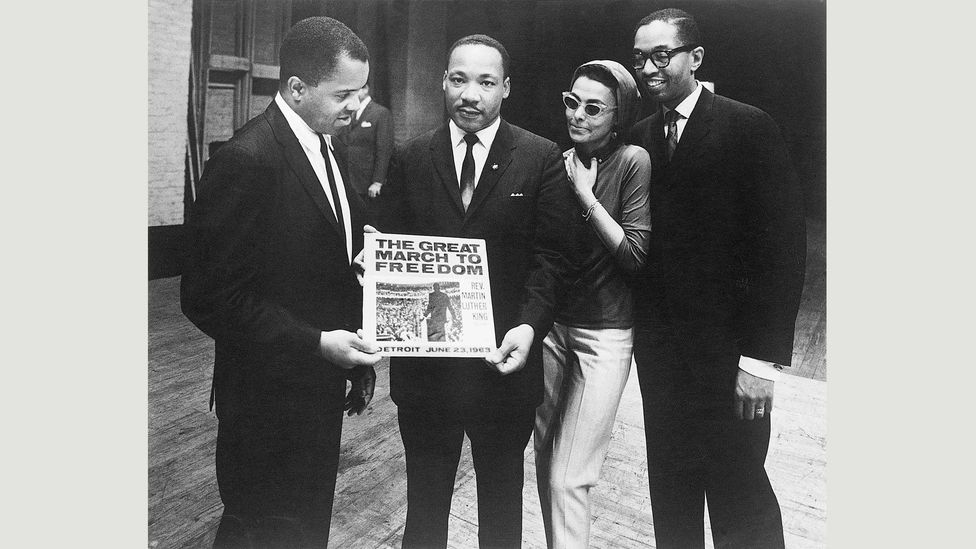 On the Gordy label, Motown released an album of Martin Luther King’s address to the Freedom Rally held in Detroit on 23 June 1963 (EMI Archive Trust and Universal Music Group)

By this point, Motown’s global status was certified (see clips of a 1965 “Motown special” on British TV programme Ready, Steady, Go!, presented by Dusty Springfield, for a wonderful shot of its Transatlantic frisson). In the early 1970s, the corporation also shifted its HQ to LA (and began to produce some of its most innovative classics, including Marvin Gaye’s What’s Going On? and Stevie Wonder’s Innervisions albums), although Detroit’s original Hitsville building remains its spiritual home today, as the Motown Museum. 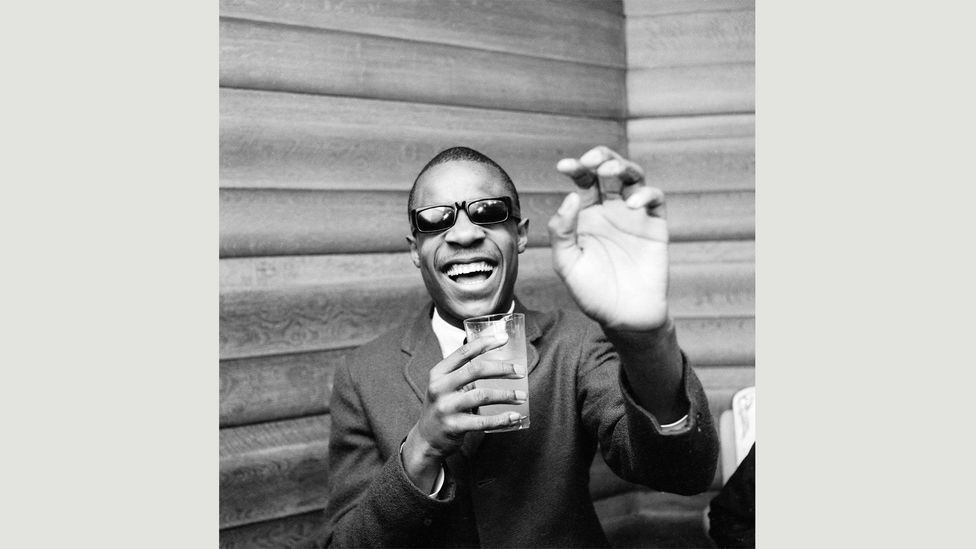 The music industry is not a naturally harmonious environment; tensions and rivalries bristled from Motown’s earliest breakthroughs and its “assembly line” work ethic was not for the faint-hearted. Marvin Gaye once wryly quipped: “It was a loving Gestapo – because Berry is a loving cat – but it was still the Gestapo.” By the 1980s, many of Motown’s legends had forged mega-success on other labels, yet there was also a “family reunion” quality when these stars regrouped in 1983 for a TV special to celebrate Motown’s 25th birthday: Yesterday, Today, Forever; this live show was where Michael Jackson debuted his signature move, the moonwalk. 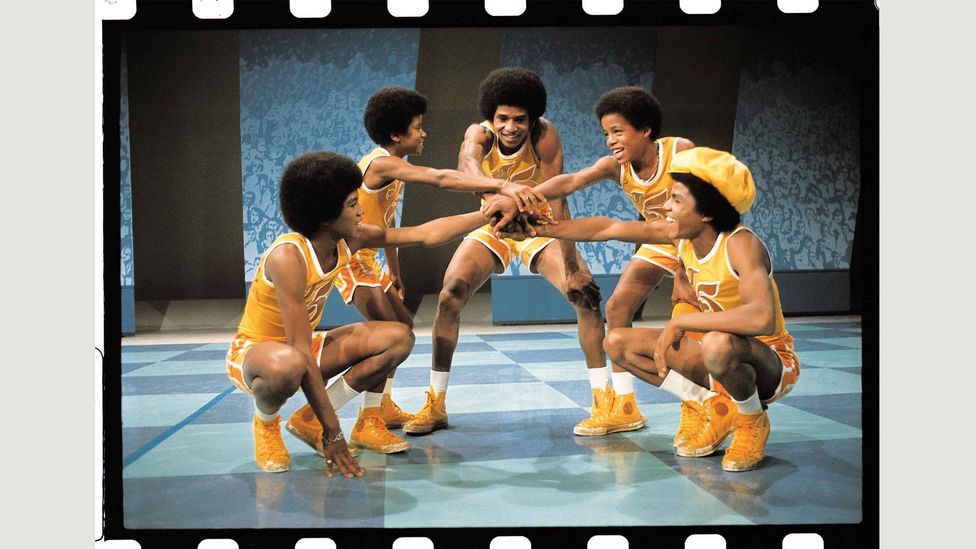 Gordy sold his ownership in Motown in 1988, to major label MCA and an investment banking firm for $61million – noting that this was less than its full worth; indeed, five years later, Polygram would purchase Motown for $301million. By this point, the label’s chart domination had waned – but Gordy had forged an empire that was synonymous with soul music, and also transcended it; he’d faced high-profile objections from the likes of politician and civil rights activist Jesse Jackson when he first planned to sell Motown, because it evoked such an indomitable identity, achievement and pride. 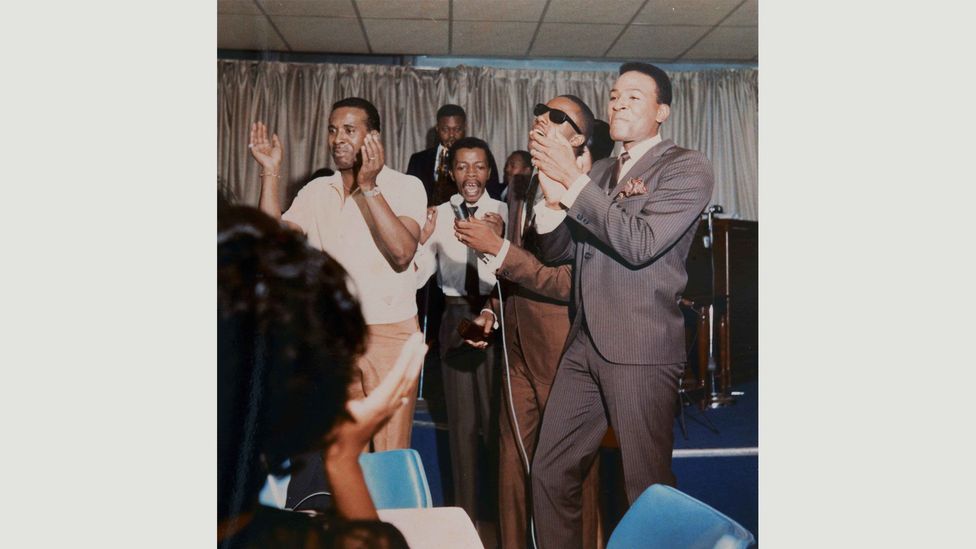 Stevie Wonder and Marvin Gaye at a Detroit nightclub in 1964 (Credit: Private Collection from Motown: The Sound of Young America by Adam White with Barney Ales, Thames & Hudson)

It still does. In the 21st Century, passions still run high for classic Motown; the Obamas hosted a star-studded Motown Gala at the White House in 2011, and the former FLOTUS also recently uploaded a ‘Becoming Motown’ playlist to accompany her autobiography. Gordy’s own autobiography has formed the basis of a hit theatre production, Motown the Musical, launched on Broadway and currently in London’s West End and touring the UK.

“Motown is almost more alive as an entity than it ever was before,” argues Adam Spiegel, British producer of Motown the Musical. “Its legacy is very apparent – this is music that’s played at every wedding, and in every shop and restaurant – and there are also millions of young people discovering its songs every day.

“It doesn’t matter where you go in the world; if you say the word ‘Motown’, people instinctively smile. There are almost no words that trigger the same international emotional response.” 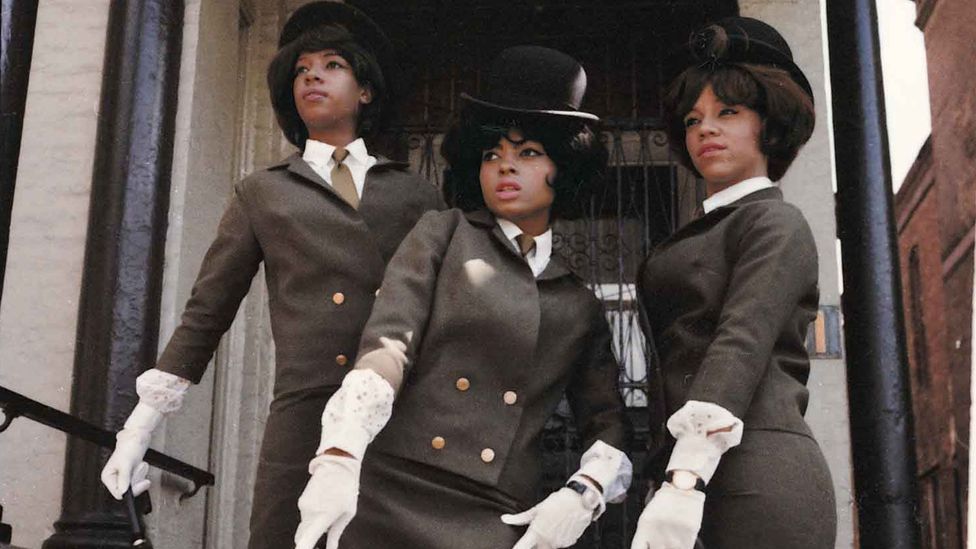 Motown celebrations have their place in every element of pop culture, whether it’s major museum exhibitions (London’s V&A hosted a celebration of The Supremes in 2008) or new-gen entertainment, such as the recent Netflix kids’ animated series Motown Magic. At 60, the sound of young America retains its vitality – and its iridescent power.

There is something else that explains the enduring power of Motown. Gordy, recalling a tour of the American South, said that “despite the hostility and racism we faced, we knew we were bringing joy to people. The audiences were segregated. The venues had a rope down the middle of the audience separating blacks from whites, but soon the rope was gone and black kids and white kids were dancing together to the same music. It created a bond that echoed throughout the world.”

Motown: The Sound of Young America by Adam White with Barney Ales is out now, published by Thames & Hudson