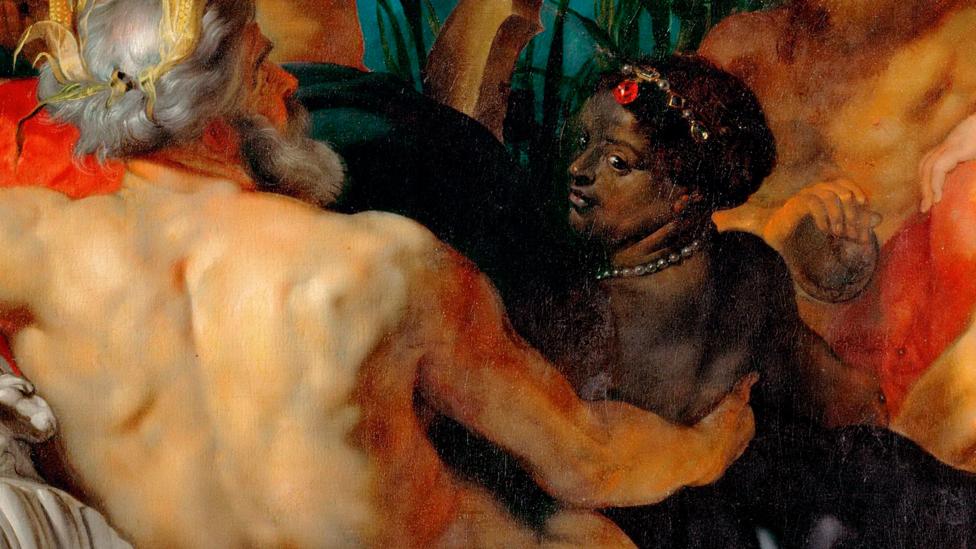 Clash of the Titans was one of the most popular films of 1981. Its glittering retinue of Hollywood stars told the story of Perseus, the demigod from Greek mythology who kills a sea monster and saves the beautiful princess Andromeda from being said monster’s lunch. Such was the film’s popularity that it was remade in 2010; the film managed a rather disparaging 26% on the Rotten Tomatoes site. How many of those rating the film had a classical education is unclear, but perhaps it would have performed better had its producers done their research. As according to British art historian Elizabeth McGrath’s 1992 article The Black Andromeda, Andromeda was, indeed, originally depicted as a black princess from Ethiopia.

–     The rare blue the Maya invented

Anyone who watched either of the two Clash of the Titans films will know that Judi Bowker and Alexa Devalos are both white women, and anyone who has seen Andromeda in a painting – perhaps Titian’s or Poynter’s – will believe she is white too. But McGrath’s article was definitive in addressing three things: that all the Greek mythographers placed Andromeda as a princess of Ethiopia, that Ovid specifically refers to her dark skin and that artists throughout Western art history frequently omitted to depict her blackness because Andromeda was supposed to be beautiful, and blackness and beauty – for many of them – was dichotomous. There is no doubt about Andromena’s race, according to Professor McGrath. 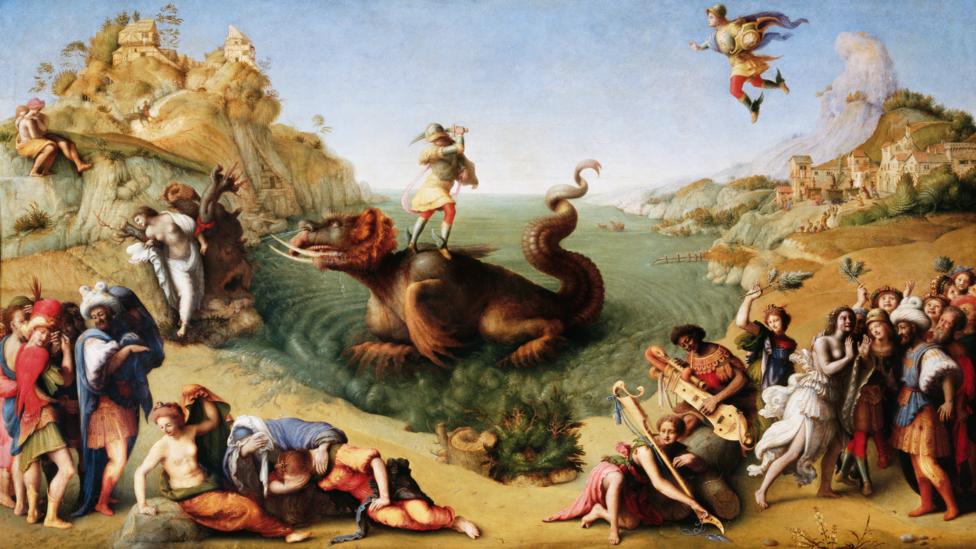 Yet Renaissance art repeatedly depicts Andromeda as white. In Piero di Cosimo’s Perseus Freeing Andromeda from the 1510s she is actually whiter than all the figures around her, including a black musician and her parents, who are considerably darker and in exotic costume. We do know that there was active debate about her skin colour, a debate that would certainly seem racist to modern eyes. McGrath references Francisco Pacheco, a Spanish artist and writer, who asks in one passage of his book Arte de la Pintura why Andromeda is so often painted as white-skinned when several of the sources say she is black. 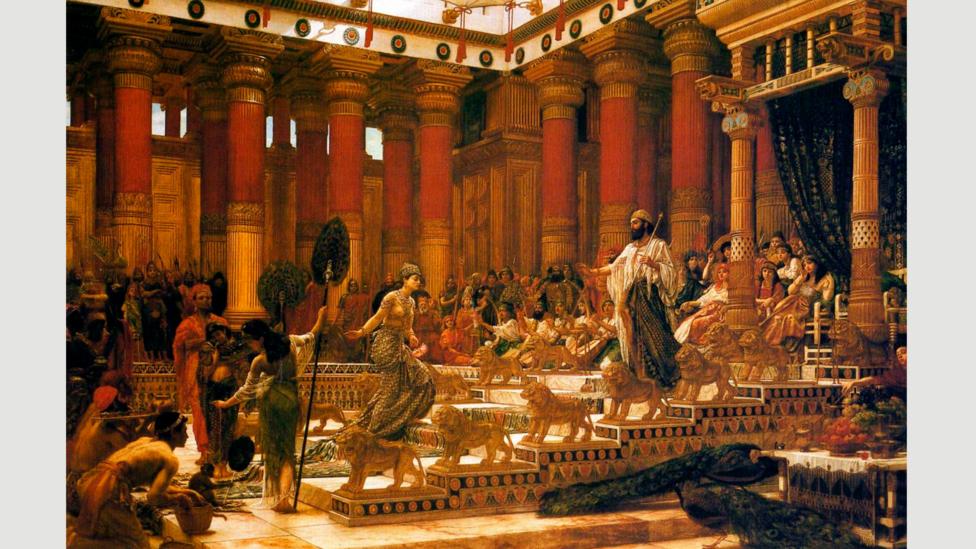 Edward Poynter’s 1890 painting, the Visit of the Queen of Sheba to King Solomon, is another instance of whitewashing (Credit: Alamy)

“He obviously got a terrible shock that Ovid could be talking about a woman as beautiful but black,” McGrath tells BBC Culture, almost three decades after the publication of her article. Books such as Pacheco’s were used as reference guides for painters on how to paint who and what – so it’s easy to see how his views could have spread. Black Andromedas were few and far between – and images like Bernard Picart’s print of Perseus (1731) and Andromeda by Abraham van Diepenbeeck (1655) appear to show a woman with stereotypical white features and hair, but with dark skin. 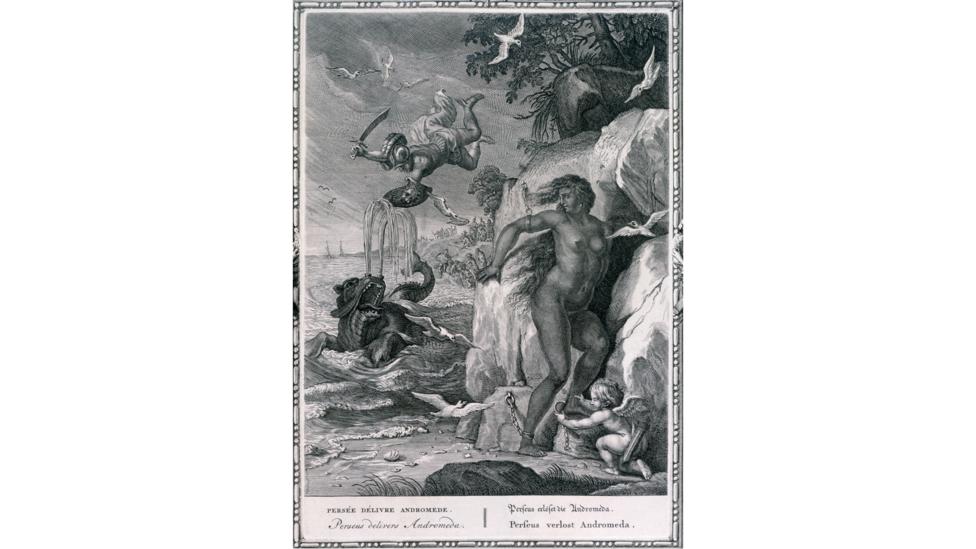 Andromeda is not the only black figure in art that this has happened to, far from it. In fact, the whitewashing of Andromeda was prefigured in Renaissance Europe by Christianity.

Michael Ohajuru, an art historian who leads tours around London’s galleries examining the representations of black people in art came to study Renaissance art history through his fascination with the black magus. This was one of the three kings, or magi, depicted in the nativity’s Adoration of the Magi scenes – typically the giver of myrrh. Ohajuru was surprised at the positivity of this figure that contrasted with history’s many depictions of black people in servile roles. “The black king was used as a positive figure,” he says. Symbolising a young African continent that had come to join Europe and Asia in Christianity, “he was used as an example of bringing the world together in the end times.” Ohajuru searched for the black king’s supposed origins and found them in the Travels of Sir John Mandeville, a 14th Century text, which says that the black magus was from Saba, a kingdom in Ethiopia. 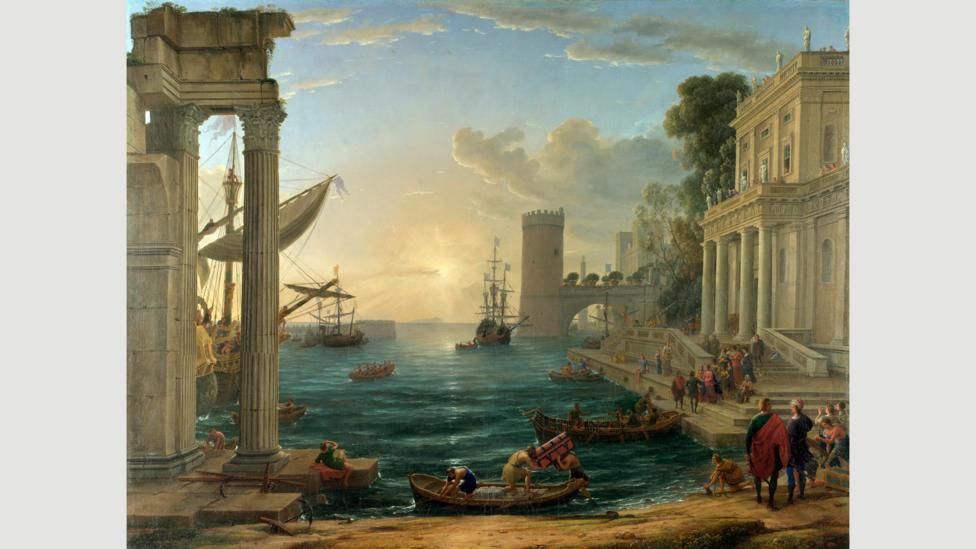 In the 1648 painting Seaport with the Embarkation of the Queen of Sheba by Claude Lorrain, the figure of the Ethiopian queen is white-skinned (Credit: Getty Images)

So Ohajuru was shocked to discover that many paintings of the Old Testament’s visitor to King Solomon, the Queen of Sheba – another word for Saba – depicted her as a white woman. He references Claude Lorrain’s Seaport with the Embarkation of the Queen of Sheba, hanging in London’s National Gallery. “She’s shown in detail at the edge of the painting, but she’s white. But the Queen of Sheba I knew came from Saba that was in Ethiopia, and the black king was from Saba. So the Queen of Sheba had to be black in my mind.”

All it takes is a few minutes of searching ‘Queen of Sheba painting’ on Google Images to see a litany of reclining, exoticised white women glancing languorously either at the viewer or King Solomon. There were once some depictions of the Queen of Sheba as dark-skinned, but the Renaissance saw her whitewashing and sexualisation on a grand scale. For Ohajuru it jars with earlier depictions of her, such as that seen at the altarpiece of Klosterneuburg in Austria, which portrays her visiting the king next to an image of the Adoration of the Magi. “She was used as a prefiguration, a foreteller, a prophesiser, that a king would visit the baby Jesus, just as a queen visited Solomon.” By the 18th Century she is no longer a queen meeting a king to have a healthy debate – she is an idolatrous seductress. 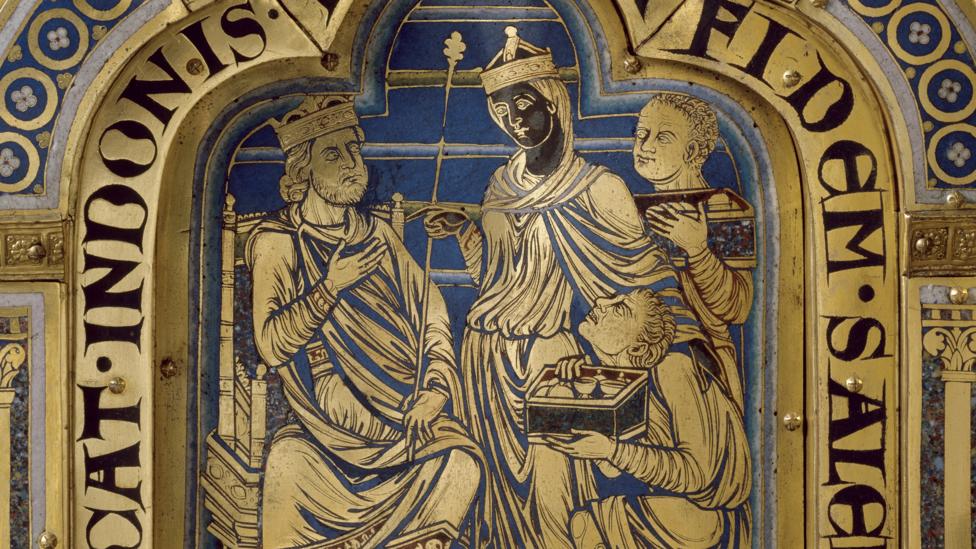 But those who depicted the Queen of Sheba – or indeed Andromeda – had a handy excuse. Ethiopia, for both the writers of the classics and students of the Bible, could mean very different things. As an Arabic speaker I’ve always understood that the Queen of Sheba was called Queen Belqis and came from Yemen. The etymology of Ethiopia comes from the Ancient Greek for ‘scorched faces’. To them, it was a byword for anyone from hotter, further climes than their small known world. “It’s quite unstable,” McGrath says. “It could be anywhere in Africa, even India, these vague places, sunburnt places at either end of the Earth. Ethiopia can almost be like a magic land where strange things happen.

“When they think, ‘Well, Ethiopia can’t really mean black people, Andromeda can’t really be black’, they then find all sorts of reasons to say that Ethiopia means something elsewhere. It means somewhere in the East. And they can easily point to the fact that there’s a vagueness around the place of Ethiopia.”

The translation of the Bible from which Renaissance artists would have been working had also gone through several iterations since its creation. McGrath writes in The Black Andromeda about how, in the original Hebrew and then Greek, the Queen of Sheba declares in the Song of Solomon in the Old Testament; “I am black and beautiful.” By the time this makes it into the 405 AD translation into Latin Vulgate, ‘and’ becomes ‘but’; “I am black but beautiful.” In England, the 1611 publication of the King James Bible changed it even further: “I am black but comely.” The racist attitudes that diminished and hypersexualised black women are obvious. Perhaps it’s this phrase, rather than any painting, that has been the most destructive of them all.

Without the wisdom of the Queen of Sheba or the beauty of Andromeda, images of black beauty in art are rare; there are, of course, plenty of sketches and paintings of black people, but from the 18th Century onwards they largely focus on studies of fieldworkers, servants and slaves. There is the odd anomaly though – and these anomalies take us back to the Netherlands, where the black magus as a symbol flourished.

In addition Elizabeth McGrath sees 17th-Century Antwerp as fairly open-minded. Inspired by Psalm 67, where Ethiopia ‘will stretch forth its hands to God’ with its Gentiles, was some unusual artwork. According to the Old Testament, Moses married a ‘Cushite’, an Ethiopian, and in Jacob Jordaens’ depiction of Moses and his Ethiopian wife in 1650, the couple “confront, indeed might even seem to challenge, the very prejudices of the spectator.” God actually gives Moses’ sister Miriam leprosy for a week to punish her for speaking ‘against’ Moses’ selection of bride; it’s an unlikely iconographic depiction of anti-racism. 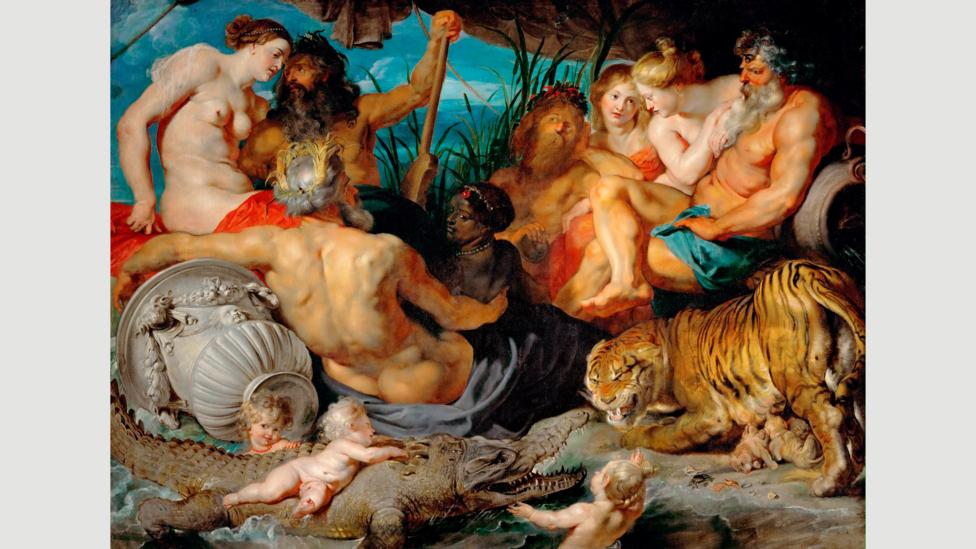 The Four Rivers of Paradise by Rubens is unusual in its depiction of a powerful black female figure (Credit: Getty Images)

Peter Paul Rubens, the artist credited with ‘making big beautiful’, also made black beautiful in The Four Rivers in the 1610. The four rivers are personified, and everyone is, well, pretty Rubenesque, with rippling muscles and heaving bosoms. In the middle sits the Nile, the only figure to stare directly at the viewer. Her nudity is tantalisingly hidden, her skin is dark and she is by far the most bejewelled figure in the piece. Yes, she’s exoticised, but there’s a power to her – and she’s equal to the white women in the image. “There was an interest in painting black people in Antwerp, partly because of the conversion of black people, partly because people actually saw black people in the streets,” says McGrath.

These do, however, remain anomalies in Western art history, McGrath explains. “One reason that the black king goes out of favour is that people – religious artists and theologians – are not so interested in the old religious symbolism of Ethiopia and the Gentiles.” And so figures whose Ethiopian-ness was part of their appeal were simply seen as unimportant. 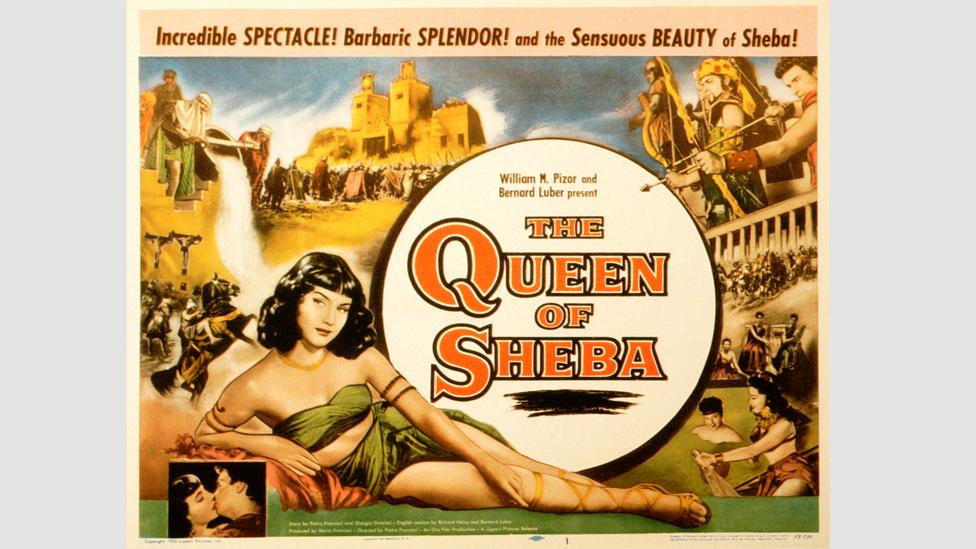 A US poster for the 1952 film The Queen of Sheba (Credit: Alamy)

It’s a complex story – of European racism as well as how useful black biblical figures were to those who wanted to teach religion through art – that helps to explain the absence of black figures in art history. For Michael Ohajuru on his art tours, that’s why it’s all the more important to try and locate the few representations of the black Queen of Sheba and the black Andromeda – and to find out why they disappeared. The huge influence that Western art history has had on our imaginations when it comes to visualising figures from the Bible or classics is arguably one that needs constant interrogation. Under such a lens, Gina Lollobrigida playing the Queen of Sheba in the 1950s or Alexa Devalos playing Andromeda become problematic. 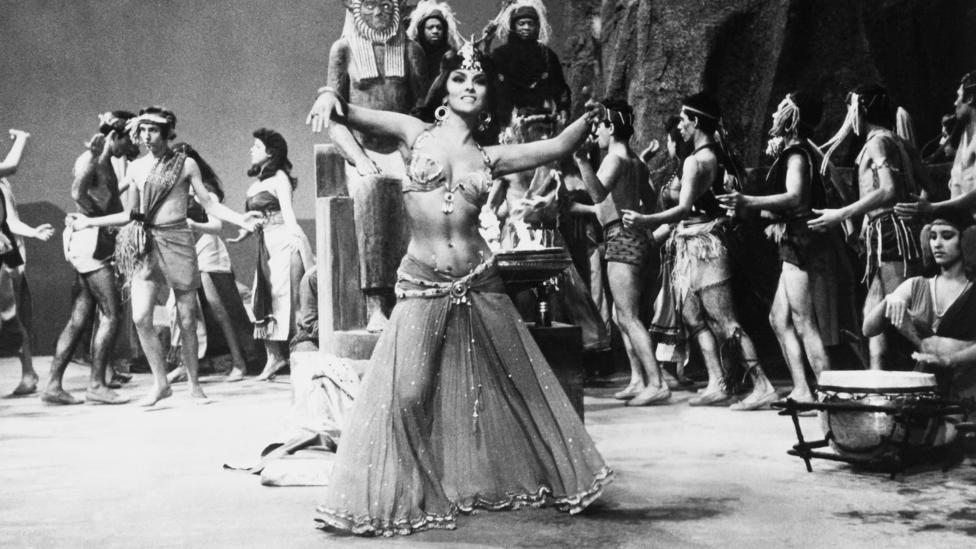 Italian actress Gina Lollobrigida played the role of the Queen of Sheba in the 1959 film Solomon and Sheba (Credit: Getty Images)

“I think for the purpose of showing people and kids that there are these pictures, that’s really important,” McGrath says. “What was actually happening with these artists and what prompted them to do these pictures, well, it’s a bit complicated.”

culture
1The image that sums up our anxieties?
culture
2The surprising roots of the Green Man
State of the Art
3Our enduring love of unicorns
Around the BBC