Loading
Art | Art history
Was Ruskin the most important man of the last 200 years?
Share using EmailShare on TwitterShare on FacebookShare on LinkedinShare on Whatsapp 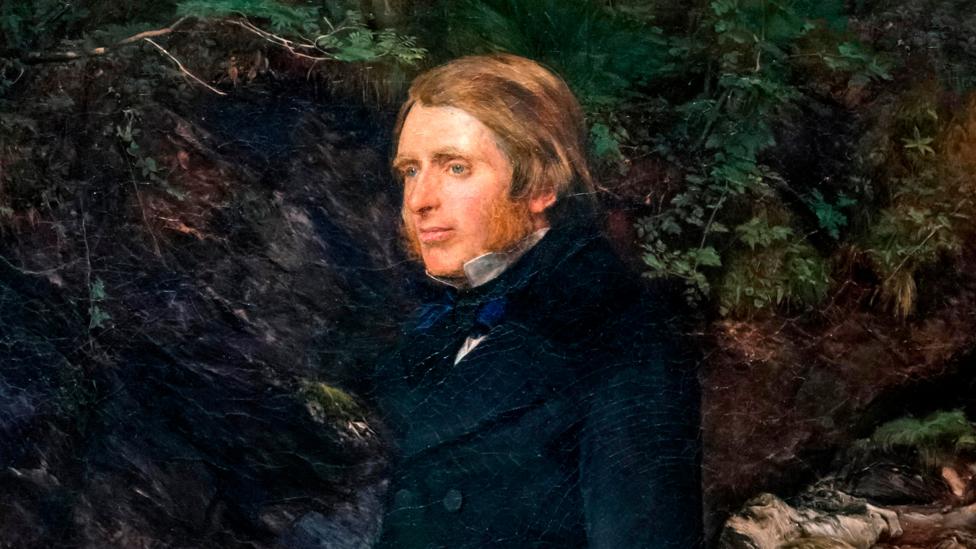 By Daisy Dunn 8th February 2019
In the bicentenary of his birth, it’s time we looked again at the forward-thinking and influential ideas of the great Victorian, writes Daisy Dunn.
I

If we think of John Ruskin at all today it tends to be as the buttoned-up Victorian who was so repulsed by his wife Effie Gray’s pubic hair that he could not consummate their marriage. The anecdote, which was actually invented in the 20th Century, has overshadowed the fact that Ruskin was one of the most influential figures in modern history, inspiring everyone from Charlotte Brontë to Mahatma Gandhi and the founders of the UK’s National Trust. An artist, critic and social reformer, he was born in London 200 years ago this month, on 8 February 1819, the same year as Queen Victoria. And he was without question one of the most important Victorians of all.

Ruskin was a man of intense contradictions. Like a fish, he said, it is healthiest to swim against the stream. He described himself mostly as a Conservative, but many of his ideas were socialist in outlook. He believed in hierarchy but also that the rich had a responsibility to protect the poor. He had a privileged background but gave away much of his wealth, reflecting in his autobiography that “it was probably much happier to live in a small house, and have Warwick Castle to be astonished at, than to live in Warwick Castle and have nothing to be astonished at”. 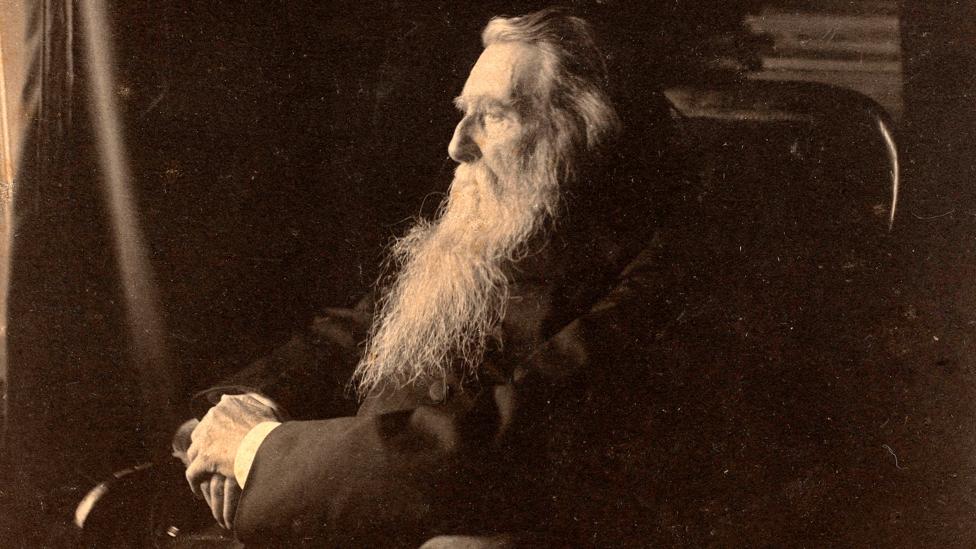 Ruskin, captured in a portrait by Frederick Hollyer, came from a privileged background but gave away much of his wealth (Credit: Alamy)

His father did a lucrative trade in sherry. His mother was the pious daughter of a pub landlord from Croydon. She used to fret about him so incessantly that, when he went to study at Oxford in 1836, she insisted on accompanying him and having tea with him every day. Ruskin reflected that it was his father’s ambition that he “should enter at college into the best society, take all the prizes every year, and a double first to finish with; marry Lady Clara Vere de Vere; write poetry as good as Byron’s, only pious; preach sermons as good as Bossuet’s only Protestant, be made, at forty, Bishop of Winchester, and at fifty, Primate of England”. Although he never entered the Church, Ruskin did obtain a double first in Classics and Mathematics, and went on to achieve more than even his father had hoped.

A new exhibition at Two Temple Place in London, England (later continuing in Sheffield) displays some of the objects from his life, including a softly-rendered portrait – possibly a self-portrait – of him as a handsome man with piercing blue eyes and characteristic blue cravat. By the time he graduated from university he had developed firm ideas about what made a good painting. While the critics of the day lambasted the ‘childish execution’ and haphazard paintwork of JMW Turner, Ruskin was full of admiration for the artist’s expressive seascapes, and drafted a riposte to the most damaging of the reviews.

Had it not been for Ruskin it is questionable whether Turner’s art would be so popular today. The first volume of what became Ruskin’s five-book series on Modern Painters was written in 1843 as a defence of the artist, and attributed simply to ‘a Graduate of Oxford’. In it, Ruskin praised Turner as “the only perfect landscape painter whom the world has ever seen”. Although Ruskin feared that public opinion had been permanently tainted by the critics, his words found an appreciative public. As well as Charlotte Brontë, William Wordsworth and Alfred, Lord Tennyson were among the readers who praised them. 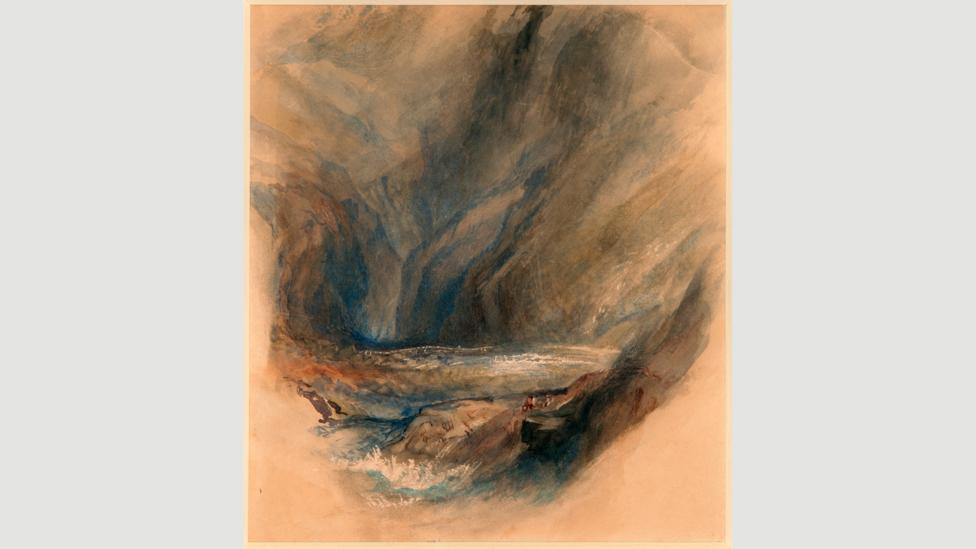 Ruskin after Turner, from the Pass to St Gotthard 1855 – An admirer of Turner, Ruskin was an artist in his own right (Credit: Guild of St George/Museums Sheffield)

Through his many books, Ruskin influenced the tastes of his generation, championing artists who were until then little known in England. While he was moved by Turner’s paintings, he was “utterly crushed to the earth” by the genius of the Venetian artist Tintoretto. Ruskin’s publications sparked fresh interest in Italian art and particularly Venetian Gothic architecture. He made numerous prints and drawings, fearing that, if he did not, Venice might vanish undocumented like “a lump of sugar in hot tea”.

Indeed, Ruskin was not only an astute critic but a talented artist in his own right. He likened the “strong instinct” he felt to draw to the instinct to eat and drink. Drawings of gooseberry blossom and ragwort, mountains and clouds, minerals and birds, including an exquisite sulphur-crested cockatoo he sketched at the zoo, line the walls of the London exhibition. Art, he believed, should reflect nature.

But what made Ruskin so unusual was that he was eager to pass his skills down not only to men like himself but to everyone. He was apparently as at ease teaching members of the Working Men’s College in London, where he was ‘wildly popular’, as he was the students of Oxford, where he was elected Slade Professor of Fine Art in 1869. Hundreds turned out to his lectures, which he would deliver with fascinating props, such as model feathers 10 times their actual size.

‘Ahead of his time’

And yet Ruskin is less famous for these achievements now than for his private life. In 1848 he married Effie Gray, the daughter of family friends from Perth, but the union was strained. Ruskin made little effort to indulge her interests – and was apparently helpless to ease the tensions between her and his domineering mother. Effie dissolved the marriage after six years on the grounds that it had not been consummated. 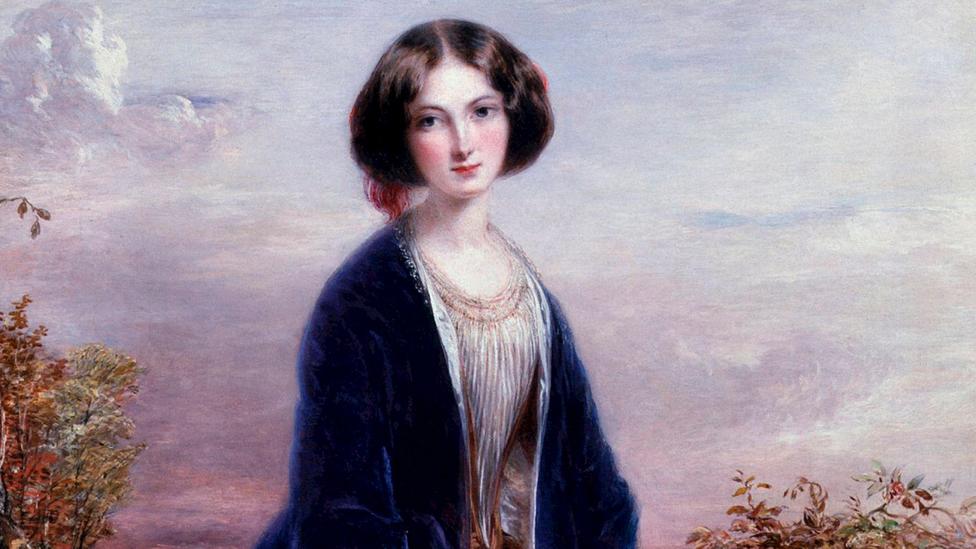 In 1967 the writer Mary Lutyens proposed that Ruskin had been too shocked by the discovery that women had pubic hair to perform his marital duties. While it is true that Effie claimed that Ruskin “imagined women were quite different to what he saw I was”, and appeared “disgusted with my person”, and that Ruskin admitted that “there were certain circumstances in her person” that checked his passion, it remains unclear what those “circumstances” were. Effie went on to marry the artist John Everett Millais, whom Ruskin had championed along with fellow Pre-Raphaelite painters William Holman Hunt and Dante Gabriel Rossetti.

“The poor man had a bad marriage, but it takes two to make a bad marriage,” says Clive Wilmer, master of the Guild of St George, which Ruskin founded in 1871. “He had faults, which one shouldn’t pretend weren’t there – he was very dogmatic… he could be quite arrogant – but he was extremely knowledgeable.” The Guild, which still exists today, was another of Ruskin’s great achievements, established in reaction against industrialisation and reliance on machines in Victorian Britain.

He thought and said not only what he himself had seen and felt, but what everyone will think and say in the future – Leo Tolstoy

“It was a very utopian idea,” says Simon Seligman, who manages the Guild’s communications. “It would establish a series of communities around the country, in which people would get back to nature, grow their own food, work with their hands… which of course are incredibly 21st-Century ideas.”

Ruskin was certainly ahead of his time. As Leo Tolstoy said of him, “he thought and said not only what he himself had seen and felt, but what everyone will think and say in the future.” He recognised that progress came at the cost of human welfare and the environment and promoted the resurrection of crafts. The founders of garden cities and of the National Trust are often said to have been influenced by Ruskin’s ideals. To encourage workers out of the city and into the beauty of nature, he founded a museum on the fringes of Sheffield. 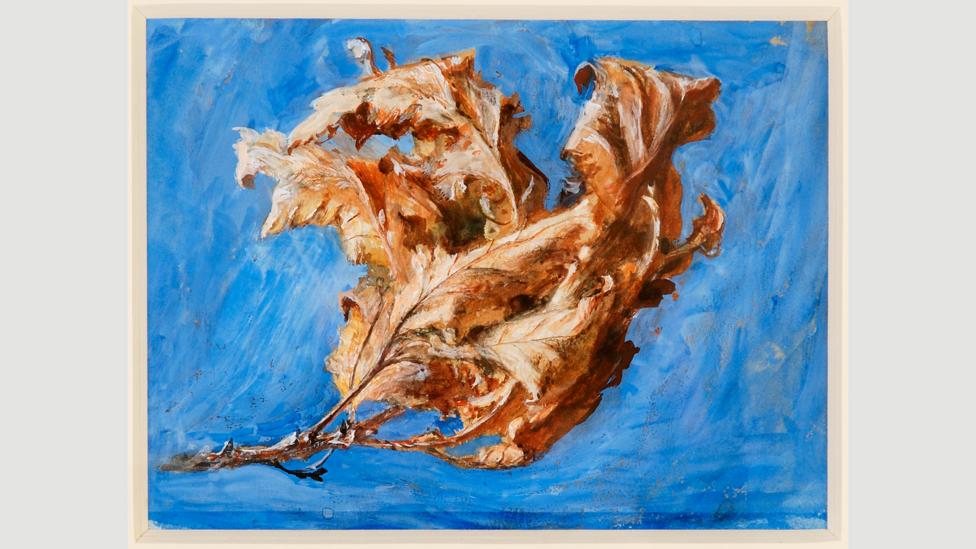 Study of Spray of Dead Oak Leaves – Ruskin likened his desire to draw with the instinct to eat and drink (Credit: Guild of St George/Museums Sheffield)

“With this collection,” says Louise Pullen, curator of the Ruskin Collection for Museums Sheffield, where the objects from Ruskin’s museum are now kept, “the words which for me seem relevant – though Ruskin wouldn’t have used them – are ‘mindfulness’ and ‘wellbeing’. The idea was for workers to slow down, look at something closely, maybe draw it, go for a walk, make themselves happy again… Sadly, this didn’t work for Ruskin, but for many I think it could.”

Ruskin was plagued by depressive episodes throughout his life and might have had bipolar disorder. His achievements are all the more astonishing considering that his mental health rendered him powerless for long periods. Yet some of his ideas have been criticised. In his staunch dismissal of machines, for instance, he displayed a peculiar single-mindedness. “Because he hated industrialisation,” says Simon Seligman, “he decided the railways are a disastrous thing – he’s even rude about bicycles! In a sense he misses the beauty of the contemporary around him.” 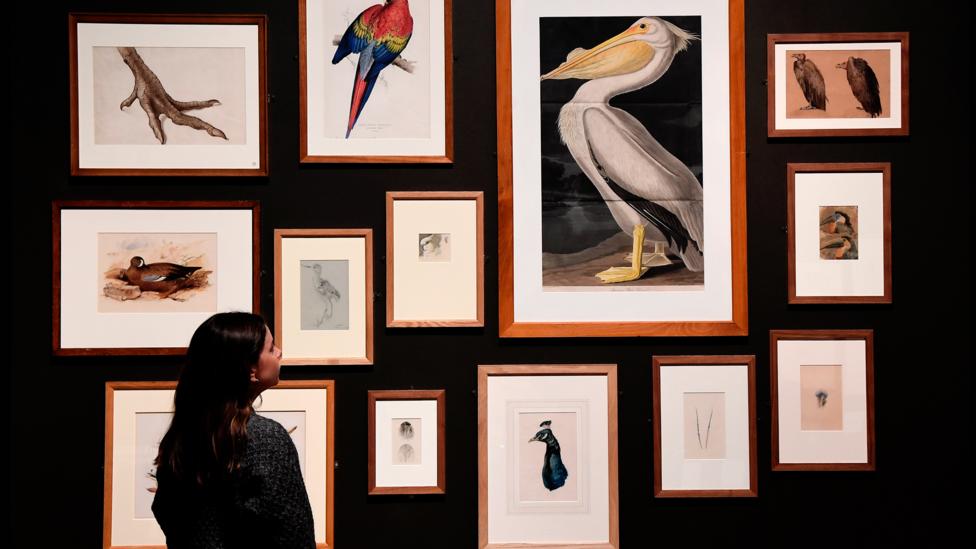 The Power of Seeing exhibition at Two Temple Place displays some of the objects from Ruskin’s life (Credit: EPA/Andy Rain)

But Ruskin’s uncompromising views were also what made him so influential. When he railed against the exploitation of poor labourers in Unto This Last, he offended some but inspired many. Mahatma Gandhi claimed that reading the book transformed him “overnight from a lawyer and city-dweller into a rustic”. Gandhi embraced Ruskin’s teaching that manual labour was just as important as the professions, and translated his work into Gujarati.

Ruskin could never have done so much had he not had a considerable private income. When his father died in 1864, he inherited at least £120,000 from him and proceeded to pour much of it into philanthropic projects, buying up rows of houses to provide shelter for the poor. Although he lost money on some ventures, his kindness was such that, by the time he died from influenza at the age of 80 in 1900, he had given away much of his inheritance.

In the bicentenary of his birth, the forethought and generosity of John Ruskin deserve to be recognised once again. As Wilmer, master of Ruskin’s Guild, says: “He was the most extraordinary man.”

John Ruskin: The Power of Seeing is at Two Temple Place in London until 22 April. John Ruskin: Art & Wonder is at the Millennium Gallery in Sheffield from 29 May – 15 September.