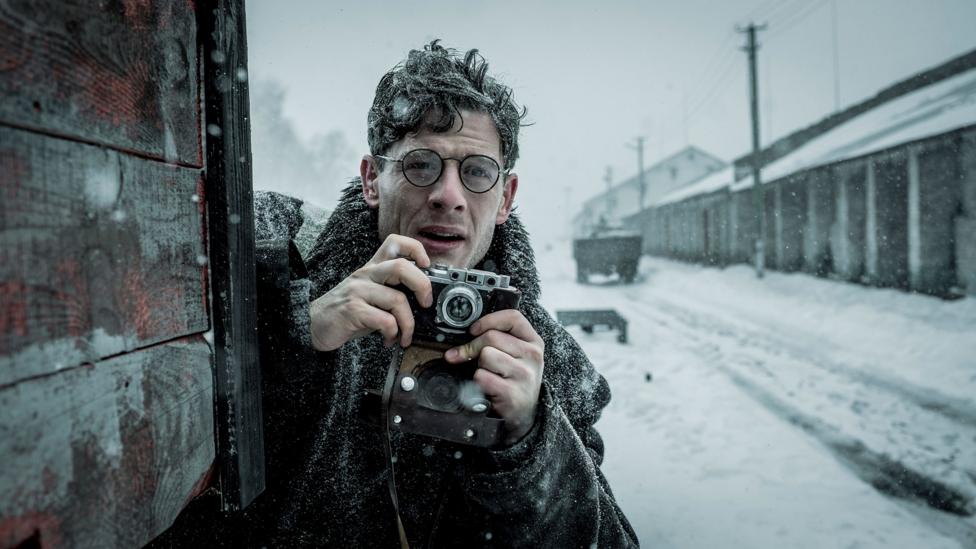 By Emma Jones 11th February 2019
A new film showing at the Berlin Film Festival tells the story of Gareth Jones, a reporter who exposed Stalin, was hushed up, and inspired George Orwell’s Animal Farm.
F

Fake news did not start with the Trump era. Mr Jones, set in 1933, is the story of a Welsh journalist who exposed the Holodomor, a famine caused by Stalin’s agricultural policies in which up to 10 million people died. Jones was accused of being a liar by those with an interest in hushing it up – but later he influenced George Orwell’s Animal Farm, and many of Orwell’s most damning sentences – “all animals are equal, but some animals are more equal than others” – punctuate the film.

-       The daring director who broke taboos

-       The films that are rewriting history

McMafia’s James Norton is terrific as Gareth Jones, a teetotal, Russian-speaking Cambridge scholar from Barry, south Wales. Jones was a lucky reporter – he made his name after finding himself on an aeroplane with Adolf Hitler, and in possession of an exclusive interview. In the film, directed by Poland’s Agnieszka Holland, off Jones goes to Moscow, ostensibly to try to interview Joseph Stalin too, but he follows his journalist’s nose for a story to slip into Ukraine, where reporters were banned. “Everywhere there is the cry, there is no bread. We are dying,” Jones would later report of his shocking experiences of the starvation he encountered.

Though a Polish production, Mr Jones has a Hollywood-friendly cast to play the trio of lead characters – James Norton, Vanessa Kirby as reporter Ada Brooks and Peter Sarsgaard as Walter Duranty, the British-born Moscow editor of the New York Times, who spits out contempt and cut-glass English vowels with every line. But at 141 minutes, Agnieszka Holland–  an Oscar nominee for 1990’s Europa Europa, and whose recent credits include episodes of The Wire – doesn’t move Mr Jones along quickly. Unless that is, she’s artificially speeding up the trains and bicycles bearing Jones’s breaking news, or the man himself, a figure in black running through a stark white palette of Ukrainian snow. It’s like he’s entered a horror film – which at this point, he has.

If Gareth Jones represents the best of journalism, Walter Duranty is the worst – although Sarsgaard plays him so well, he emerges as the more interesting of the two. Duranty accused Jones of lying about his eyewitness report, though history believes the Pulitzer-Prize winner knew about the extent of the famine. Duranty was thought to be close to the Soviet government; others have suggested he was under duress. The moral ambiguity of those with power is represented by the greyness of the surroundings, from the sludge of London, miserable with austerity and ruled by old men whispering in dark corners, to the Soviet housing blocks of Moscow. The lights literally only go on for an avant-garde burlesque party at which Jones is desperately uncomfortable – perhaps because of a naked Peter Sarsgaard greeting him, or simply because its bored debauchery seems symbolic of what happens when journalists try to forget who’s paying them.

Gareth Jones seems so pure that he never quite emerges into three dimensions, and audiences don’t need such heavy hints from Mr Jones to understand this is supposed to be relevant now. Norton-as-Jones’s assertion that reporters have to go after the facts “and not take sides” earned a laugh from the press in Berlin. But the flat denial of an eyewitness account of famine makes one wonder about the Twitterstorm it would provoke in this age; how furiously Jones’s report would be debated.

Holland also shows the desperate desire to believe in Stalin; many intellectuals longed for him to be the antidote to Hitler and simply did not want to believe that his policies had caused such horror. “So there’s no hope then,” George Orwell concludes sadly in the film, when he accepts Jones’s story as true. Yet as long as there are the Gareth Joneses of this world out there, pedalling on his bicycle to bring the truth to the world, there must be.

The 69th Berlin International Film Festival runs until 16 February 2019. Mr Jones will be released later in 2019.