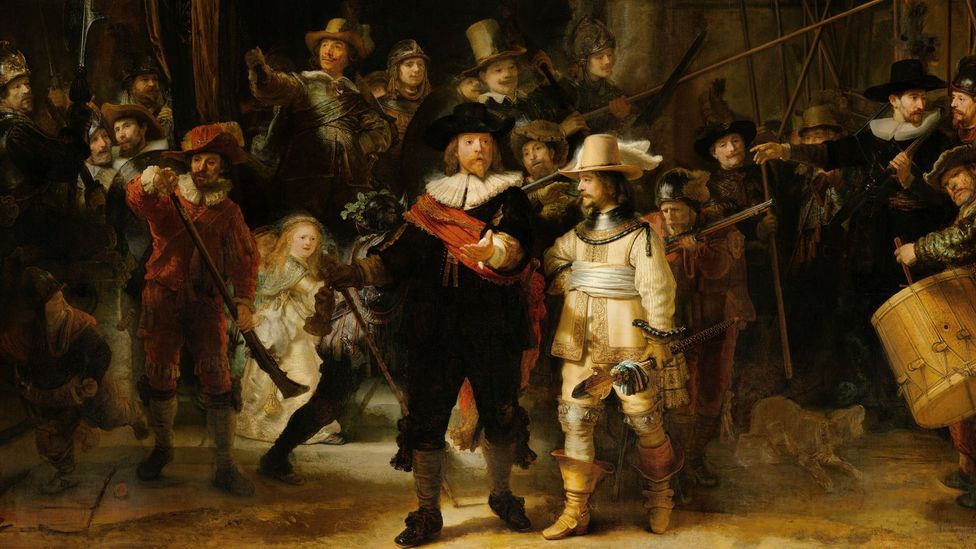 When Rembrandt van Rijn died aged 63 in 1669, he was buried in an unmarked grave, in a plot owned by the church. After 20 years, as was customary for those who had died in poverty, his remains were dug up and discarded. In 1909, a memorial stone was finally fixed to the north wall of the Westerkerk, the Dutch Reformed Church in Amsterdam where he’d been buried. You can see it today; it’s a copy of the one that adorns the colonnaded wall – just above the plumed helmet of one of the ceremonial pike carriers – in Rembrandt’s most famous painting The Night Watch.

Rembrandt had outlived all of his children by his wife, Saskia, who had died 27 years earlier, at the height of his success. In fact, she died the year The Night Watch, his great, life-sized painting of one of Amsterdam’s civic militia companies, was finished. Titus, then just a year old, was to be the only one of the couple’s four children to survive into adulthood, the others living only days or weeks.

Why had the greatest artist of his age fallen into poverty?

But by the time of his father’s death, Titus too was dead. Eleven months earlier, aged 27, he had succumbed to a plague that was spreading through the city. For Rembrandt, it was the final devastating blow in a life marked by personal tragedy, and by the financial uncertainty of his final two decades. The artist’s common-law wife Hendrickje Stoffels­ (with whom he’d had a daughter who survived him into adulthood) had died six years earlier. Like his two daughters born to Saskia, the child was named Cornelia. 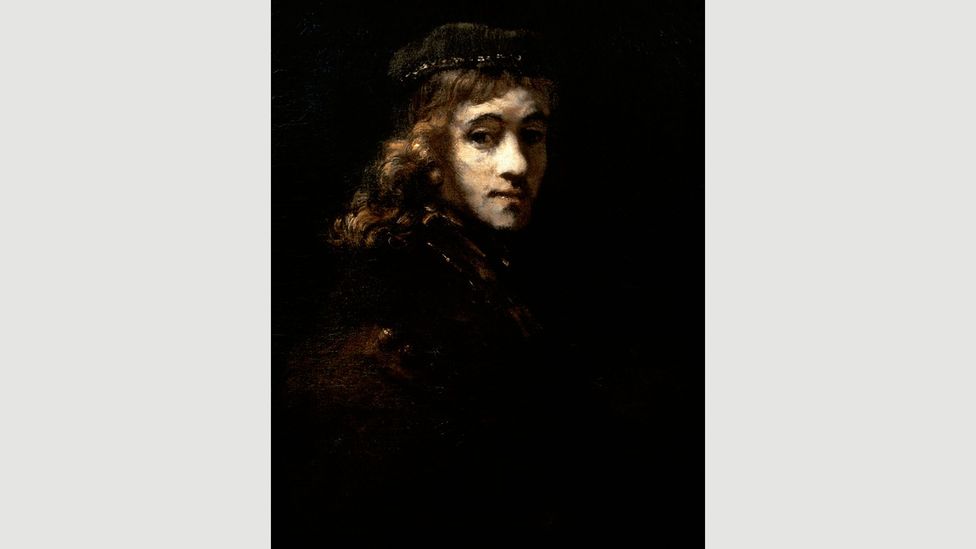 It was Titus and Hendrickje, the woman he’d initially employed as his maid, who had kept the artist financially afloat after he’d been forced to sell, in 1656, his grand house in Amsterdam’s Jewish quarter (now the Rembrandt House Museum). His fine art collection and his exotic antiques – the latter often appearing as props in his paintings – also went to auction. Titus and Hendrickje stepped in to act jointly as his art dealers when Rembrandt was unable to trade under his own name due to prohibitive bankruptcy laws.

So why had the greatest artist of his age, whose death is this year being marked on its 350th anniversary with exhibitions around the world, fallen into poverty?

A myth has grown around Rembrandt’s apparent fall from favour that was, for many years, connected to The Night Watch. The painting has even inspired conspiracy theories courtesy of film director Peter Greenaway. His 2007 picture Night Watching, and follow-up documentary Rembrandt’s J’Accuse, argue that the painting’s complex iconography reveals a murder plot that leads to members of the civic militia, who it portrays threatening Rembrandt’s life and leading to his ruin. 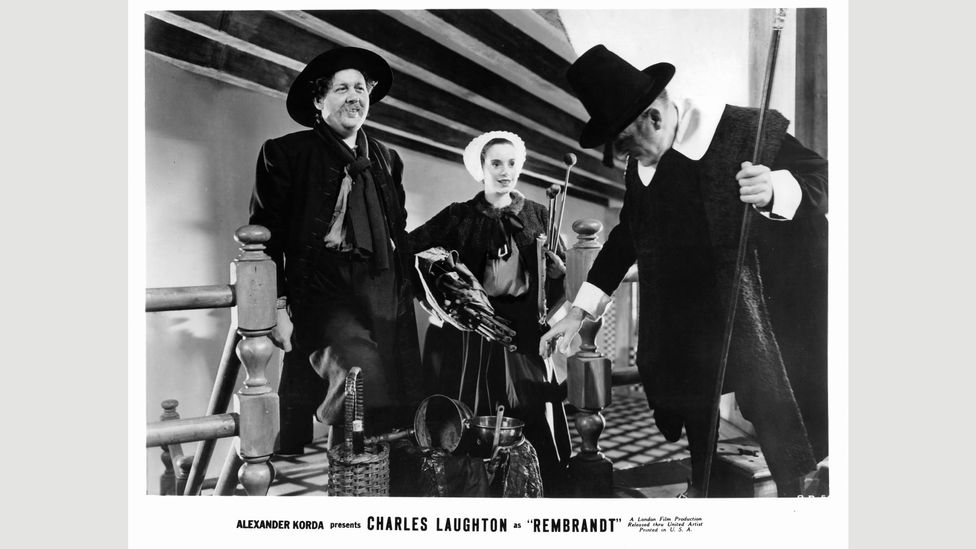 Films such as Alexander Korda’s Rembrandt and Peter Greenaway’s Night Watching have taken considerable licence with the circumstances around the painting (Credit: Getty)

Perhaps rather less fancifully, but exercising considerable licence nonetheless, is the reaction to the painting in Alexander Korda’s 1936 film Rembrandt. When The Night Watch is unveiled, with great fanfare, to members of the militia and their wives, stunned silence is quickly followed by laughter from the wives, then fury and indignation from the men. Asked by Charles Laughton’s Rembrandt to tell him honestly what he thinks of the painting, the artist’s friend and patron, Jan Six (who, incidentally, is the subject of one of Rembrandt’s greatest single portraits) doesn’t hold back. “I can see nothing in it but shadows, darkness and confusion,” he responds, with great animation. “You surely don’t expect us to take this as serious art?” Moments later, Captain Banning Cocq, who appears in the painting alongside his exquisitely attired lieutenant, both of whom are bathed in a golden light, tells the artist his work is a monstrosity. “Do those look like gentlemen of rank and position?” he asks, with pompous indignation.

But unless Banning Cocq’s critique swiftly softened, we know that this scene couldn’t have happened. Not only do we know that the captain placed a copy of the painting in his family album, but it’s very likely that it was he who commissioned the Dutch artist Gerrit Lundens to paint a smaller replica, which is now in the collection of London’s National Gallery (on display in the Rijksmuseum). 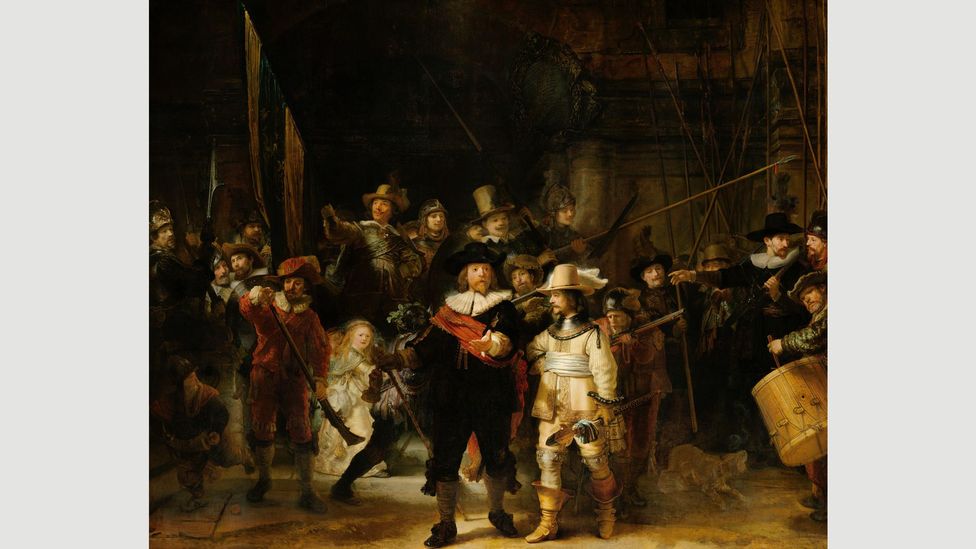 Painted within a few years of the original, Lundens' painting shows us what Rembrandt’s masterpiece would have looked like before the canvas was cut on all sides in 1715, wherein it lost 2ft from the top, 2ft from the left, and inches from the right and bottom. As well as losing two figures on the left, the painting lost much of its airy architectural space, and the once off-centre figures of Banning Cocq and his second-in-command Van Ruytenburch was now aligned to the centre, arguably making the painting lose something of its sense of forward motion.

Today this would be an act of criminal vandalism, but it was then fairly common, and was done on the occasion of its removal from the company’s meeting hall to Amsterdam’s City Hall to fit its allocated space, where it remained on public display. In 1885 it moved to the new Rijksmuseum, where it had a gallery built specially for it.

A Cocq and bull story

So did The Night Watch really lead to Rembrandt’s downfall? Perhaps we should look closely at the painting, not for any clues to a conspiracy to murder, but to see how Rembrandt deviated from the norms of a sub-genre that was very popular in the new Dutch Republic: the civic militia portrait, or The Guardroom Scene. And we can make up our minds as to whether the painting might have brought displeasure to those who’d commissioned it.

It was certainly Rembrandt’s most masterly composition to date, which, post cut, still measures almost 12ft x 14ft (3.65 x 4.26m). In this richly hued, tenebrous masterpiece, where light is used to lend the scene an ethereal quality amid the commonplace bustle of movement and action, we detect a certain strangeness, a certain unreality to the scene – even though it’s a painting full of noise. 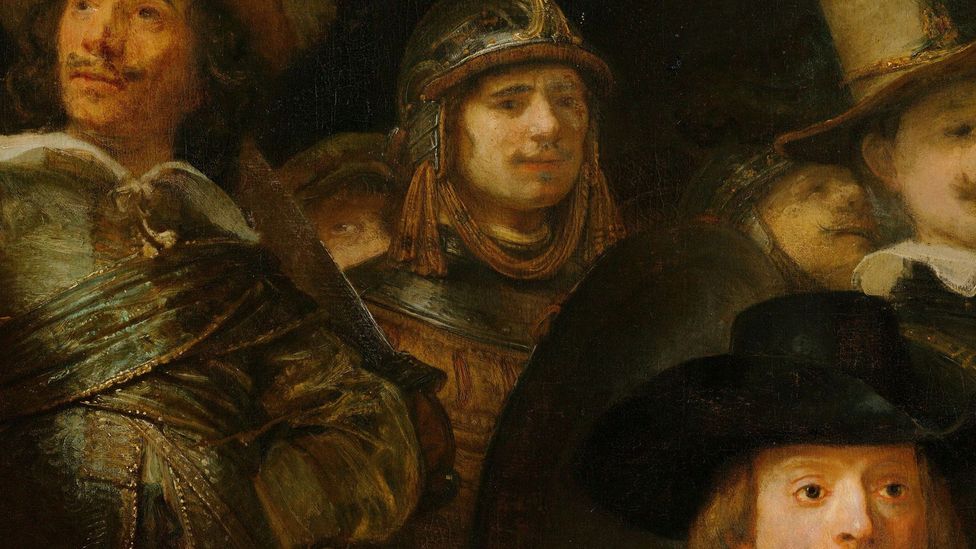 Just as the Flemish artist Van Eyck loved to do, Rembrandt painted himself hidden within the scene (Credit: Rijksmuseum)

Here a frisky dog barks; a drummer beats his big drum, readying to keep time with the marching guards; a boy is seen at the furthest edge to the left, looking back as he runs off carrying a gunpowder horn; a guard tinkers with the muzzle of his musket; behind the richly attired captain, another guard accidently fires his musket, its smoke mixing with the white plume on the lieutenant’s tall hat (a comical near miss, and an actionable offence). Further to the right, a guard examines the barrel of his musket. Meanwhile, some figures, jostling behind the more prominent characters, are barely visible beyond a limb or, if you look very carefully, an eye and a partially glimpsed face. That eye to the upper left of Banning Cocq, belongs to the artist himself. Just as the Flemish artist Van Eyck loved to do, Rembrandt painted himself hidden within the scene.

And who is that brilliantly illuminated girl dressed in gold and with a dead chicken tied to her waist? She is both of the scene and not. Rather than portraying a real person, she is a symbol or mascot, and the chicken, or rather its prominent claws, is the emblem on the coat of arms of Banning Cocq’s company of Kloveniers (or Musketeers).

Contrary to the myth, Rembrandt continued to get commissions from the great and good

But why a chicken and not an eagle, which surely would be more appropriate for a militia company, not to say more dignified? At dignity’s expense, Rembrandt appears to be punning on the captain’s name, even perhaps alluding to his appetites. What’s more, that mascot is surely the face of Rembrandt’s Saskia?

And what of the guard accidentally firing his musket and nearly blasting the unsuspecting head off the lieutenant? We can’t see his face, only his ancient helmet garlanded with oak leaves and his old-fashioned military attire. He too appears in the company and not of it. He also appears to allude to the company’s history as something beyond that of civic pomp. 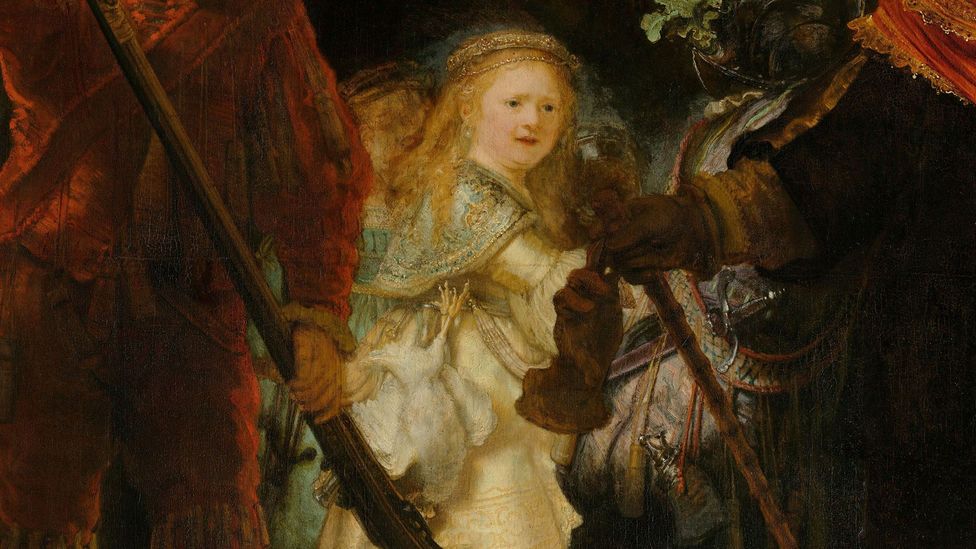 By painting a chicken and not an eagle, Rembrandt appears to be punning on the name of Banning Cocq (Credit: Rijksmuseum)

Though the figures of the captain and his lieutenant dazzle as the heads of their company, the guards must have seen Rembrandt’s contemporaries paint far more formal militia portraits – stiffer, for sure, but above all, far more dignified than this. By the time Rembrandt painted Banning Cocq and his men, though the company’s function had become largely ceremonial since peace had been forged with Spain decades earlier, there was clearly great pride in belonging to a civic militia.

But here Rembrandt’s concerns are not confined to civic pride. Above all, he is interested in creating a drama and bringing it to life with emotional force, mixing a sense of the solemn (or at least of attempted solemnity) and the comic. So here we have a ragtaggle crowd not quite managing to fall into step behind the figure of the captain as he gestures for his men to march out. Nobody had painted a militia painting quite like this before. 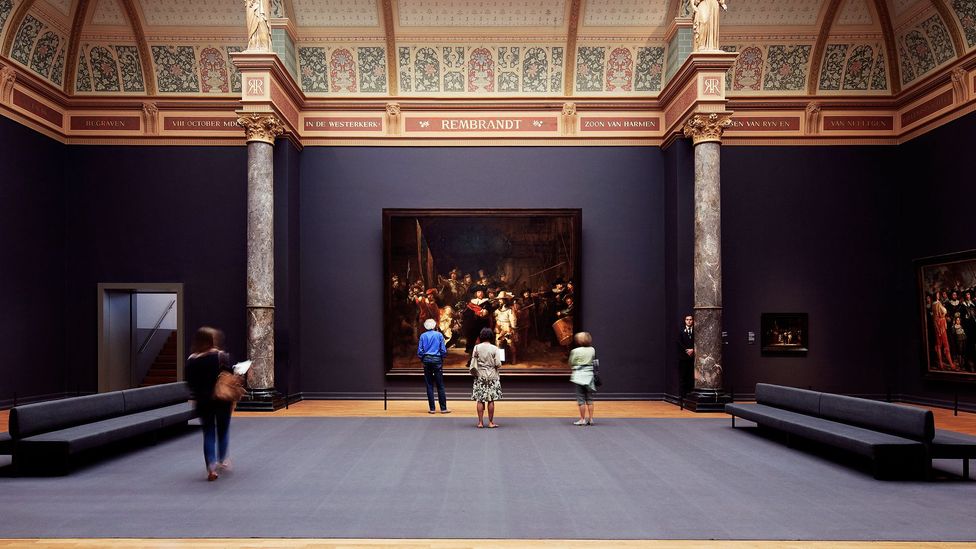 All the Rembrandts is an exhibition at Amsterdam’s Rijksmuseum commemorating 350 years since the artist’s death (Credit: Erik Smits, Rijksmuseum)

But contrary to the myth, which began early in the 19th Century with influential biographies of the artist that chimed with the burgeoning idea of the artist as outsider, Rembrandt continued to get commissions from the great and good.

It only acquired that title in the 1790s, when the paint’s varnish was grimy enough to suggest a crepuscular and mysterious night scene

However, two factors greatly contributed to Rembrandt’s problems in the second half of the century. He was increasingly extravagant – the grand house, the curios and antiques, the fine-art acquisitions. The other was to do with his loose and rough handling of paint. His style was going out of fashion. What was coming in was the kind of highly polished ‘fine painting’ practised by the likes of Rembrandt’s former pupil Gerrit Dou, who soon overshadowed his former master in terms of fame and success. Rembrandt had to wait until the rise of the Impressionists before being, in a sense, ‘rediscovered’ and placed in the story of art that drew a direct line from him to them.

As for The Night Watch, it only acquired that title in the 1790s, when the paint’s varnish had darkened and was grimy enough to suggest a crepuscular and mysterious night scene. Before then it was more prosaically known by the titles, The Militia Company of District II under the Command of Captain Frans Banning Cocq, or The Shooting Company of Frans Banning Cocq and Willem van Ruytenburch. Still, even after being cleaned of that grimy varnish in 1946, the painting still manages to hold on to its mystery.

The Night Watch will be the centrepiece of the Rijksmuseum’s All the Rembrandts from 15 February to 10 June before undergoing restoration from July. The restoration work will take place before the public and will also be live streamed.