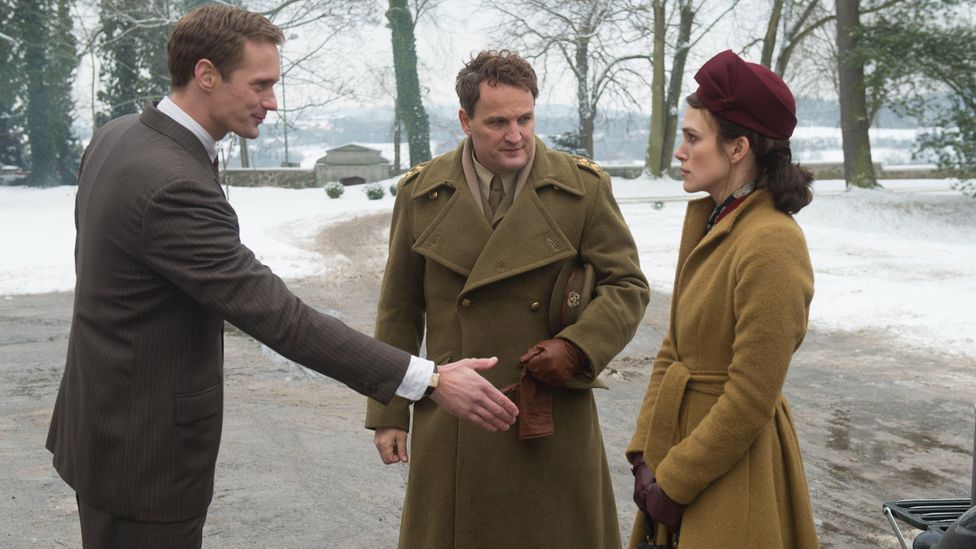 The characters in The Aftermath face intriguing dilemmas. Four months after the end of World War Two, Rachael Morgan (Keira Knightley) arrives in Hamburg to join her husband, Lewis (Jason Clarke), a British military officer. How will they deal with the Germans, the vanquished enemy whose bombing of London killed their young son? Will they repair their marriage, now as chilly as the snowy landscape in which her train arrives? Will she fall into bed with the handsome German widower, Stefan Lubert (Alexander Skarsgård), an architect whose grand house the British have requisitioned for the Morgans’ use?

The answer to that last question is obviously yes. You don’t throw two stars as gorgeous as Knightley and Skarsgård into a film together without expecting romance. Unfortunately, their love affair feels just that predictable, and the more potent issues of guilt, redemption and forgiveness are underdeveloped. A conventional period drama, The Aftermath is pretty to look at, easy to watch, but disappointingly lifeless.

The film is based on Rhidian Brook’s 2013 novel, loosely inspired by his grandfather’s true story. Stationed in Germany, he allowed the owners of his requisitioned house to share the space, just as Lewis decides that Lubert (as he is called throughout the film) and his teenage daughter, Freda, can stay. The Luberts are banished to attic rooms instead of being sent to a camp – an early sign of Lewis’ goal of reconciliation – while Lubert waits for a hearing which can clear him of complicity with the Nazis, a standard process. That unusual premise is soon overwhelmed by the romance.

There is a soothingly familiar echo of period movie tropes

For a time The Aftermath works as a promising melodrama in a setting worthy of Downton Abbey. Lubert’s wife was killed during the war, but the sumptuous house she inherited has survived the Allied bombing that has created a city otherwise strewn with rubble. The house’s light-filled rooms and elegant furnishings are lovely if improbable, a triumph of production design over realism.

Wandering through this space, Knightley and Skarsgård give Rachael and Lubert a shared look of haunted grief, while Clarke has less to work with. Lewis is generous with the Germans, but unable to mourn his son or show emotion toward his wife. The fractured marriage leads to a romance so abrupt it is nearly unfathomable.

Rachael arrives loathing all Germans, whom she considers responsible for her son’s death. Wearing prim sweater sets – somehow Knightley can make even frumpy 1940s styles seem glamorous – and a sad expression, she plays the piano, unknowingly creating echoes of Lubert’s dead wife. She imperiously snaps at Lubert and expects him to stay out of her way. There is a soothingly familiar echo of period movie tropes as the two of them circle each other.

Then one day Lubert angrily snaps back, says he’ll give Rachael an excuse to throw him out of the house and kisses her. Days later they’re having sex on the dining room table. Yes, the clichéd sex-on-the-table scene, but without the passion those scenes call for. What happened to her antipathy? Lubert had once mentioned that he loathed everything Hitler stood for. It’s as if he said, “I’m no Nazi,” she said, “OK, then,” and her resentment vanished without a struggle. There is no hint on either side that the affair comes from self-loathing, conflicted desire or anything other than loneliness and a physical attraction that barely registers on screen. His character is just as simplistic as hers. The film gives us no reason to think he is anything other than a good and innocent man who deserves her love.

There are so many head-scratching turns that it feels as if ramshackle editing and discarded scenes are to blame for the plot holes. Friends of the Morgans are suspicious of Rachael’s feelings for Lubert before we have been shown any evidence of that ourselves.

Meanwhile, Lewis reveals his conscience by dealing with riots on the street and ordering his soldiers not to shoot into the crowd. Freda takes up with a young Nazi. But these scenes, while among the most powerful and fraught, are sprinkled into the film so sparsely and cut so short that they feel like necessities the filmmakers begrudgingly included.

The Aftermath shares a problem with director James Kent’s one previous film, Testament of Youth, with Alicia Vikander, Kit Harington and Taron Egerton in a love triangle, set during World War One. Despite the terrific cast, the characters in that earlier wartime romance also emerged as good-looking puppets, going through the motions the screenplay set up for them, never gaining the depth or complexity that might make them live on screen.

Because there is no time for the characters to evolve as they do in the novel, or for the after effects of war to become more than pesky background, The Aftermath arrives as a mildly engaging trifle that might have worked better as a miniseries.