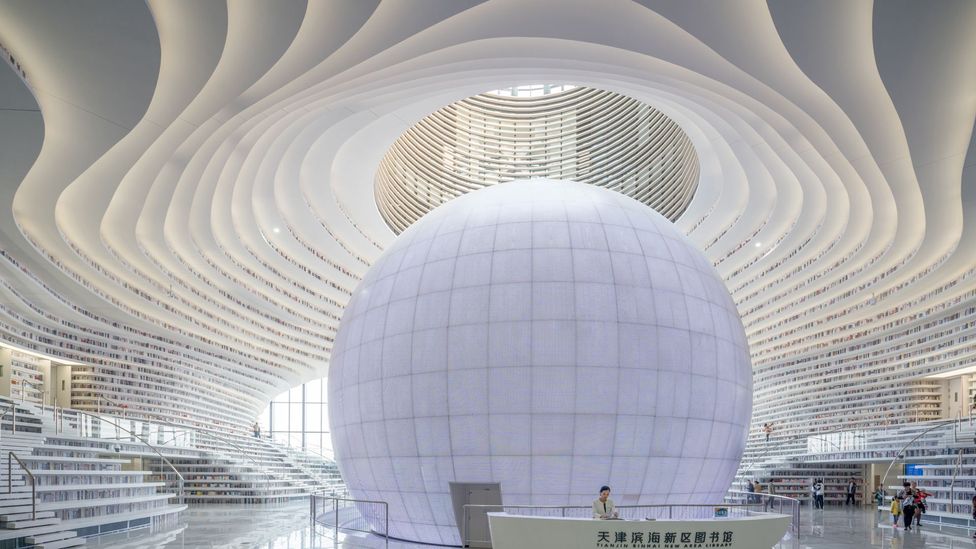 By Clare Dowdy 20th March 2019
An international movement is seeing the rise of beautifully designed cultural hubs. Clare Dowdy rounds up the best recent examples, from a library-farm to a ‘tinkering lab’. 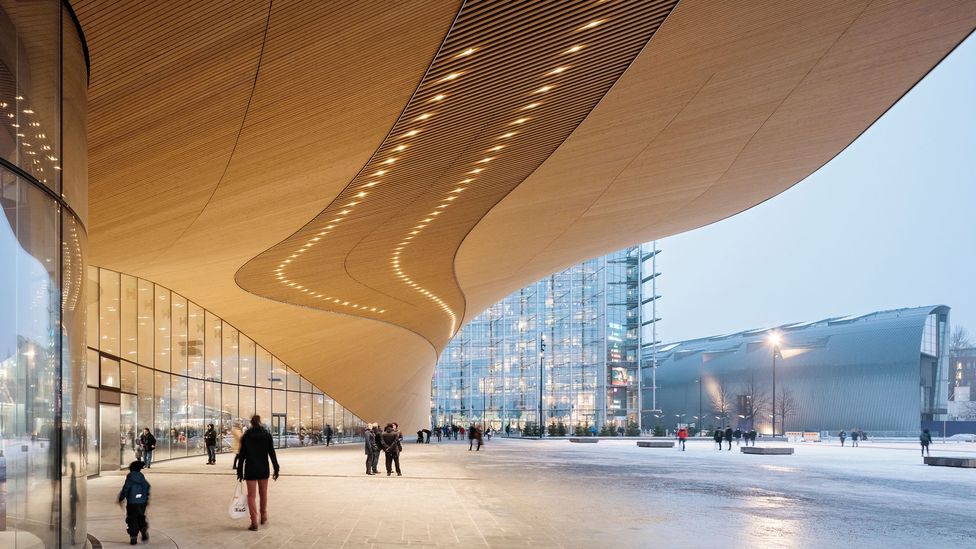 The word library derives from liber, the Latin for book. But the latest generation of libraries are positioning themselves as beautifully-designed cultural, social and civic hubs – with books thrown in. The contemporary libraries shown here are all part of a new movement around the world, where myriad diverse activities, from yoga to 3D printing, are housed in stunning library buildings from Copenhagen and Calgary to Christchurch and Chicago. At Oodi, Helsinki’s new central library, only a third of the space is given over to books. Oodi’s director Anna Maria Soininvaara says it aims “to reinvent the library for the population of Finland’s future needs, and to encourage social integration and education.” It is a response to Finland’s updated Public Libraries Act, which commits to promoting lifelong learning, active citizenship, democracy and freedom of expression. With its undulating roof and timber façade of Finnish spruce, Oodi sits on Kansalaistori square opposite Eduskuntatalo, Helsinki, the Finnish parliament building. The 17,250-sq-m structure designed by ALA Architects is positioned as a civic living room, complete with a cinema, a makerspace, recording studios, access to public services, exhibitions and community events, in addition to the books. The makerspace workshops on the second floor offer tools and new technologies such as 3D and vinyl printers, laser cutters, heat presses, sewing machines and equipment to digitally sculpt wood. Some of that space has been freed up by storing books in the basement, which are collected by book-sorting robots. (Credit: ALA Architects) 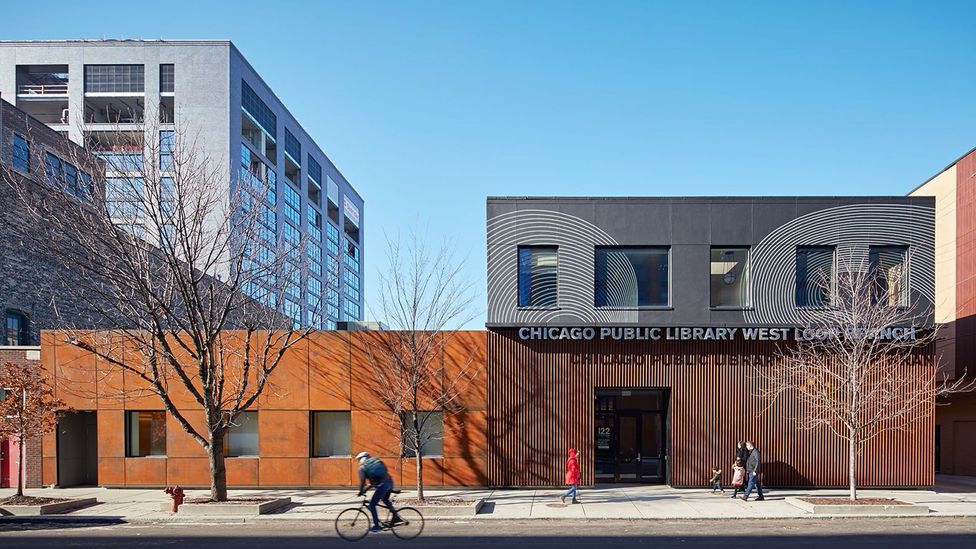 This is the first ever public library in West Loop, and the 81st branch in the city. It’s housed in two former TV studios buildings, which have been given a weathered steel façade. Inside, previously concealed original bow-truss ceilings and skylights have been exposed. Designed by Skidmore Owings & Merrill, the 1,500-sq-m space doubles as a community centre, with meeting rooms and a digital learning space with a recording studio for teenagers. For younger children, there’s a ‘tinkering lab’ with a digital maker-space; and the storytelling rooms have walls with magnetic and writeable surfaces. And like other Chicago branches, free after-school tutoring is on offer. (Credit: Tom Harris/ Skidmore Owings & Merrill) 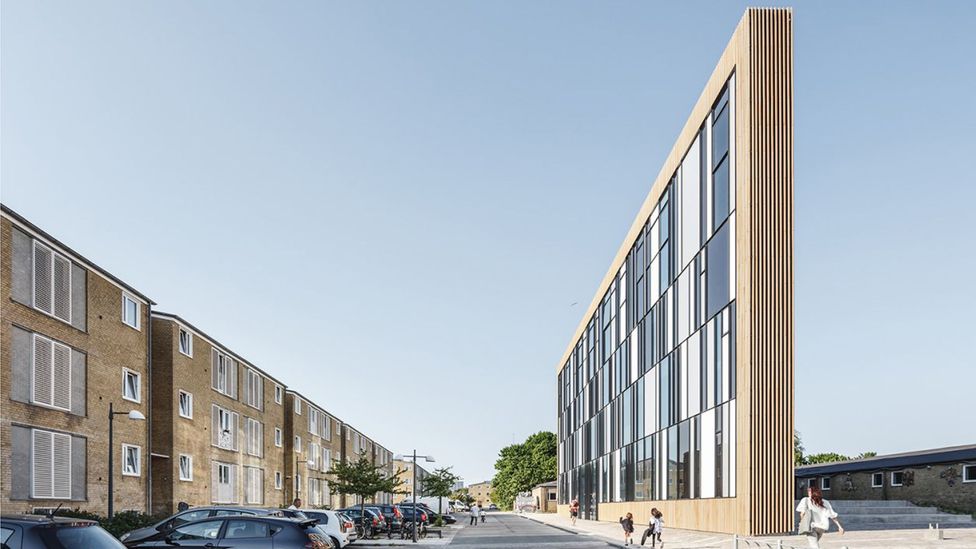 The neighbourhood of Tingbjerg, Copenhagen, has a rich modernist architectural language, but in recent times it has become marginalised, and suffers from a high crime rate. COBE’s 1,500-sq-m culture house, library and community centre is an extension of Tingbjerg School. It houses meeting rooms, a café and workshops with laser-cutting facilities. Its hall hosts concerts and events such as children’s theatre, films and toy-making workshops, along with readings by authors. At its narrowest point, the wedge-shaped structure is just 1.5m wide. (Credit: COBE) 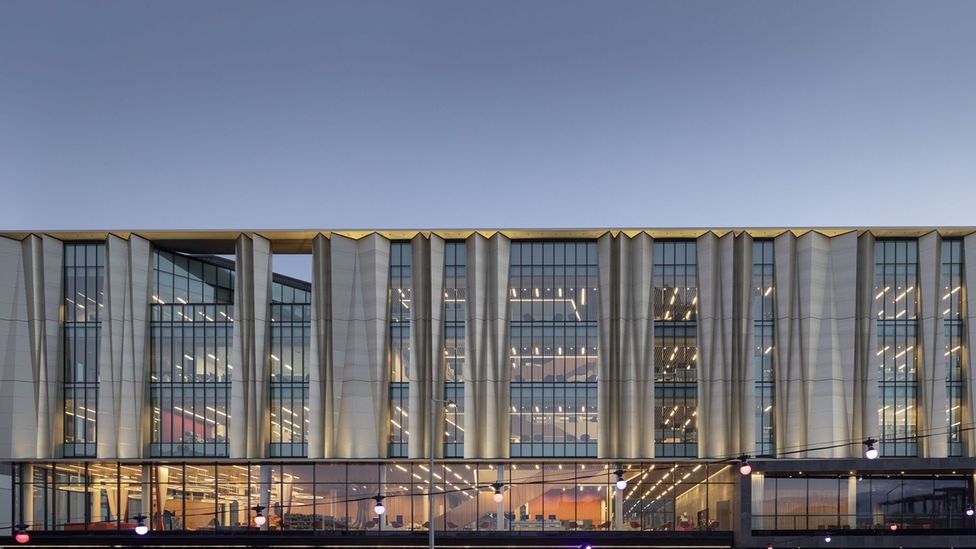 This library replaces its predecessor, which was razed in the South Island’s earthquakes of 2010 and 2011, and is one of nine anchor projects identified as vital to the redevelopment of the city. The 9,500-sq-m, five-storey building, a collaboration between Danish firm Schmidt Hammer Lassen Architects and New Zealand practice Architectus, stands in Christchurch’s historic Cathedral Square. Its big concrete walls can rock and shift to protect the building from seismic forces. Inside the entrance is a café and a technology and innovation zone with a 7m-tall touchscreen wall. A community ‘arena’ for local people is on the second level, along with a children’s area with a reading cave and activity room. On the upper three floors there are meeting and study rooms, a production studio, computer lab and music studio. (Credit: Schmidt Hammer Lassen Architects/ Architectus) 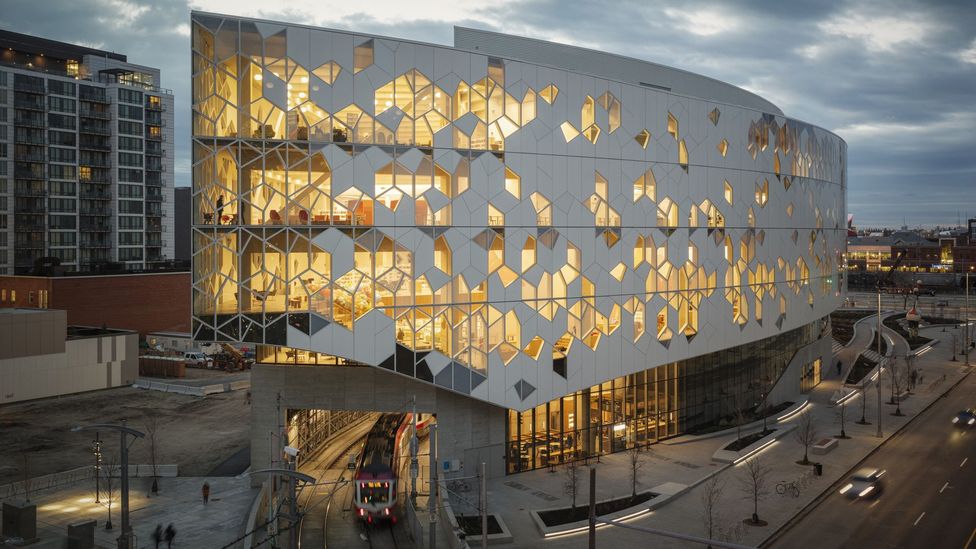 Behind the façade’s hexagonal geometry, the activities inside Calgary’s new library in Alberta, Canada are organised from fun to serious. In the children’s library on the ground floor, there are playhouses where crafts and drawing activities take place. And on level four, focused study happens in the 'great reading room'. Outside the 22,300-sq-m building, amphitheatres built into the terraces, allow library activities to spill outside. The building was designed by Snøhetta. (Credit: Snøhetta) 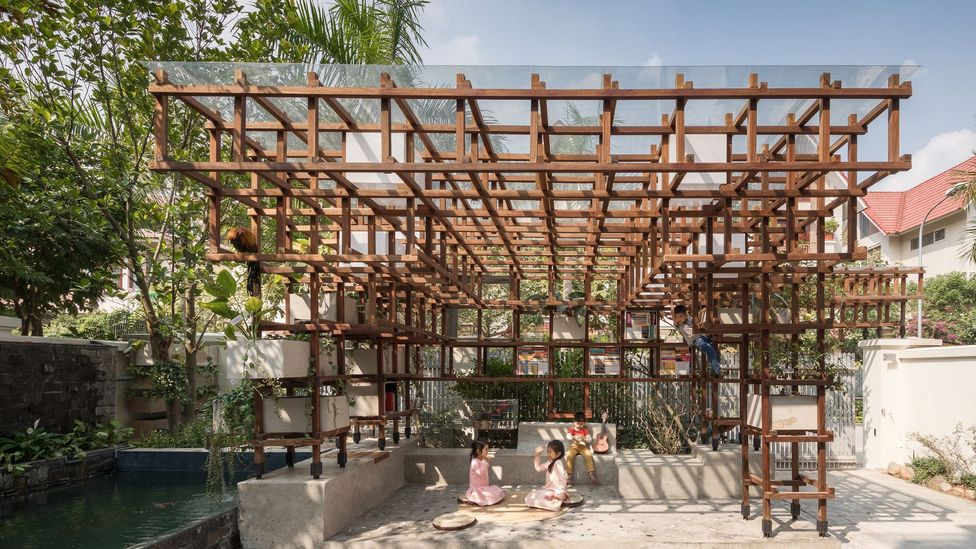 Looking like a big wooden climbing frame, this library-city-farm hybrid in Hanoi is designed by Farming Architects, and borrows from the traditional horticulture and animal husbandry of rural Vietnam. The aim is to teach city children about self-sustaining ecosystems, while giving them access to books. On site are koi carp, chickens and vegetables, and kids can play, read and learn about the ecological model, as fish and chicken manure is used as plant fertiliser. (Credit: Thai Thach/ Farming Architects) 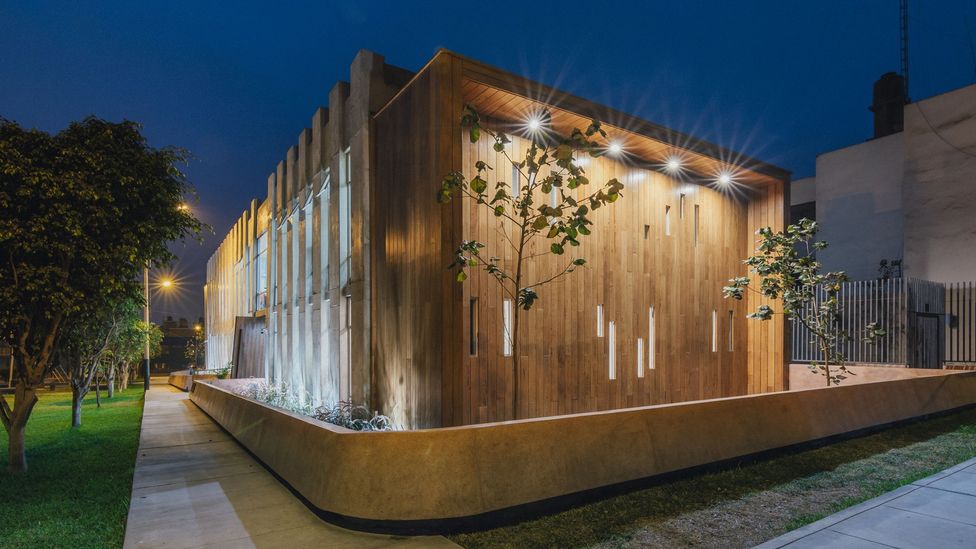 With its exposed concrete columns – reminiscent of books stacked on shelves – interspersed with vertical windows, this library in Lima, Peru, was designed by Gonzalez Moix Arquitectura. It stands next to the Inmaculada Concepción Park in the district of La Molina. Inside the 1300-sq-m building, there are spaces for a multitude of courses including guitar, yoga, drawing, photography, ballet and theatre. (Credit: Gonazalez Moix Arquitectura) 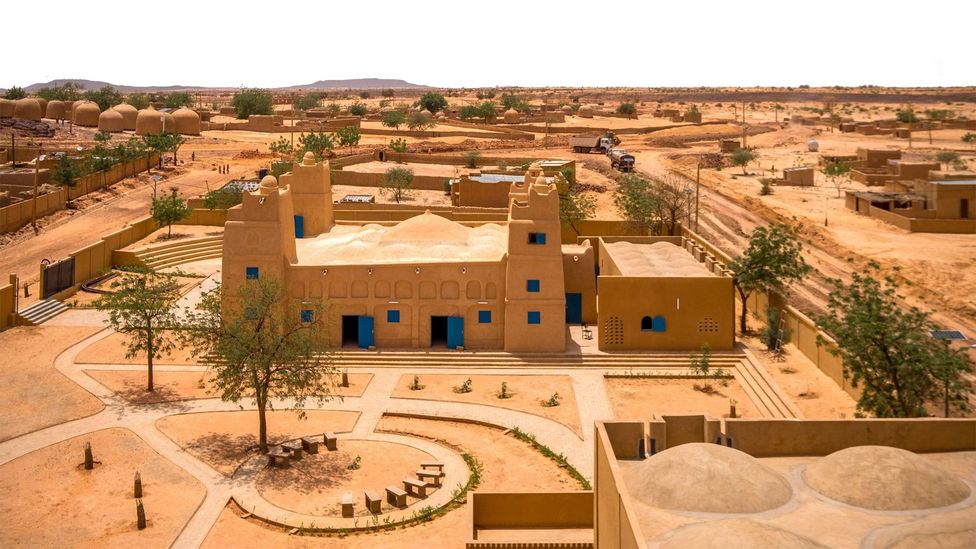 In Dandaji, a Hausa village in Western Niger, an adobe mosque that had fallen into disrepair has been converted into a library and community centre. The architects Atelier Masomi and Studio Chahar renovated the existing adobe building, but instead of using traditional wood inside, which is scarce, they opted for metal partitions and stairs and a new mezzanine level. There are well-lit study spaces – useful for doing homework if there is no electricity at home – and areas for adult literacy classes, which were requested by local women. There is also a computer lab. Meanwhile, the architects have built a new mosque next door. (Credit: Atelier Masomi/ Studio Chahar) 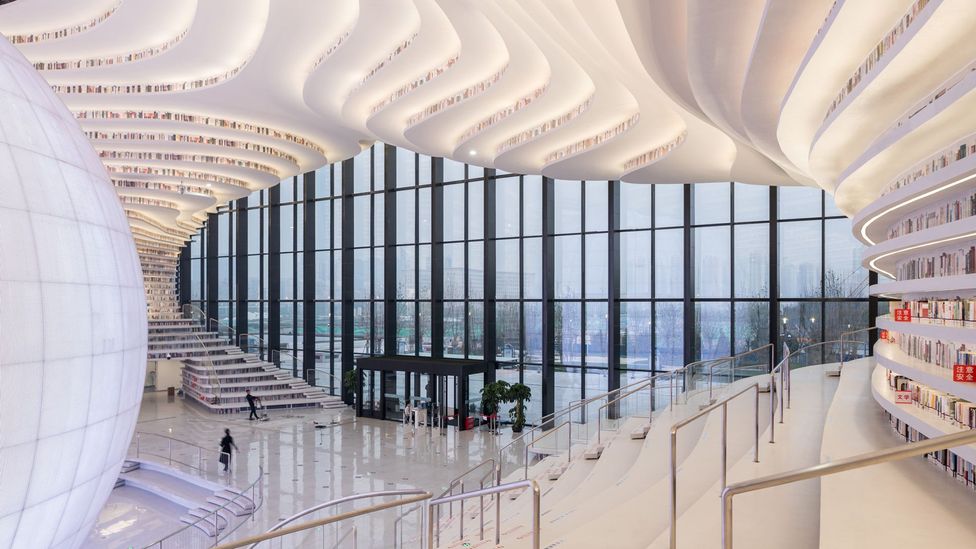 In this futuristic, five-storey, 33,700-sq-m space in Tianjin, China, tiered bookcases wrap the periphery walls from floor to ceiling. At the centre of the building, designed by MVRDV, is a spherical auditorium that acts as a social space for gatherings of up to 110 people. The first and second floors house reading rooms and lounge areas, with meeting rooms, computer and audio rooms and two rooftop patios above that. (Credit: MVRDV)