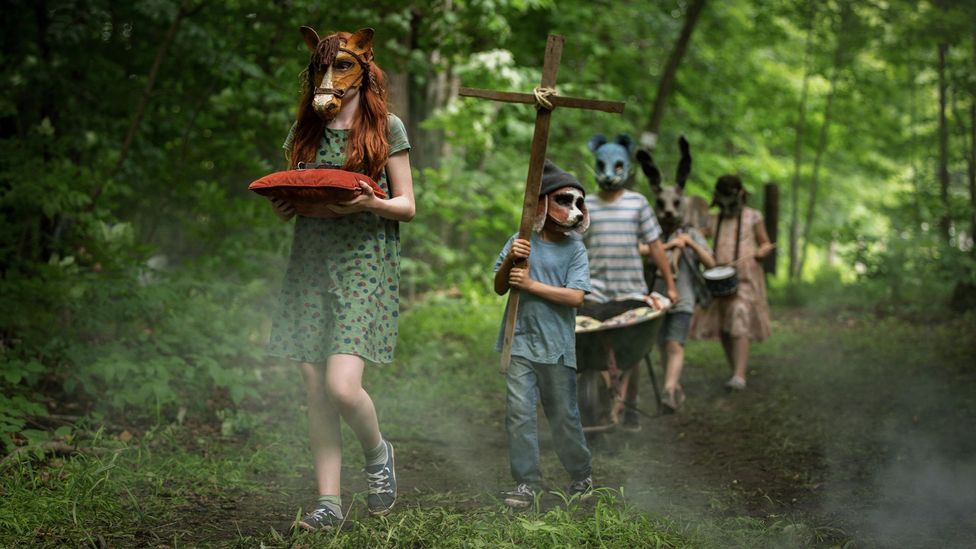 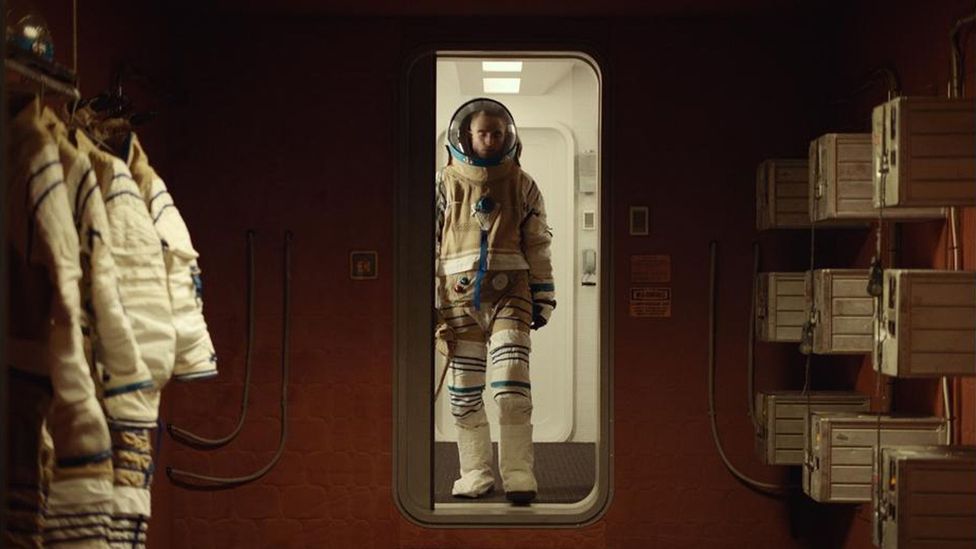 Robert Pattinson may be best known for a certain teen romance involving sparkly vampires, but he has gone on to appear in some of the most distinctive and challenging art-house projects around, from Cosmopolis to Good Time. His new film must be the most distinctive and challenging of the lot. Claire Denis’ first ever English-language production, High Life stars Pattinson as a former death-row inmate who is packed into a spacecraft and sent off towards a black hole, with a mysterious doctor (Juliette Binoche) onboard to keep an eye on him. Elliptical, disturbing and punctuated with sex and violence, the film has baffled some viewers, but others have praised it to the skies. Caryn James wrote: “High Life is provocative, eerie and above all weird. But even at its most willfully enigmatic it is anchored in this world by Pattinson’s terrific, humane, understated performance.”

Released 5 April in the US, 18 April in Greece and Ukraine and 19 April in Australia, Canada and Japan 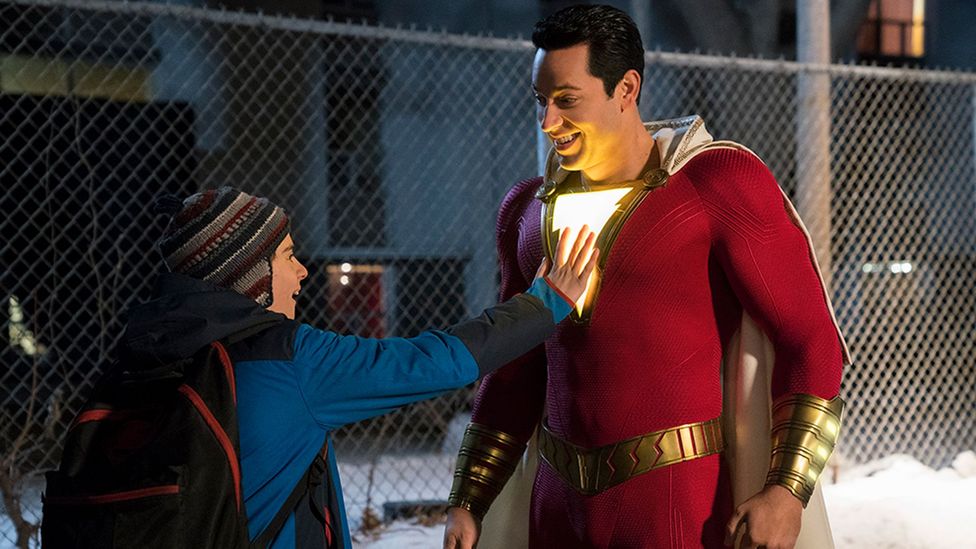 DC is wisely shifting its superhero films away from the grim and gritty territory they used to occupy toward somewhere more light-hearted. A case in point is Shazam!, a Superman-style blockbuster, but also a kid-in-an-adult’s-body comedy in the tradition of Tom Hanks’ 1988 hit, Big. Its main character is Billy Batson (Asher Angel), a 14-year-old foster child. After meeting an ancient wizard (Djimon Hounsou), all he has to do is say “Shazam” and he turns into a fully-grown hunk (Zachary Levi) with all the abilities of the “immortal elders”: Solomon, Hercules, Atlas, Zeus, Achilles and Mercury (note the initials). The AP review enthuses that the film is “a lightning bolt of unexpected joy that is certainly worth your time and money”. Fun fact: the character was known as Captain Marvel for decades before the cosmic Avenger played by Brie Larson came along, but his name was changed recently to avoid confusion.

Released 3 April in France, Italy and Sweden, 4 April in Australia, Germany and the Netherlands and 5 April in Canada, Spain, India and the US

Stephen King’s It was made into a spine-tingling mini-series in 1990, but that didn’t stop 2017’s film of the same novel being a critically lauded hit. Maybe that’s why Pet Sematary has been brought back from the dead, 30 years on from the last time it was adapted. As in the previous film, a couple (Jason Clarke and Amy Seimetz) hears about a poorly spelt cemetery in rural Boston where the occupants keep getting up and strolling home. But the (burial) plot that King fans know and love has been changed – for the better. At the time of writing, the creepy new version had a score of 91% on Rotten Tomatoes. ComingSoon.net applauds “a whole new trajectory for the story that takes things to a much deeper, much darker place”.

Released 4 April in Ireland, Australia, Germany, Denmark, and Singapore, 5 April in the US and 10 April in Belgium and France 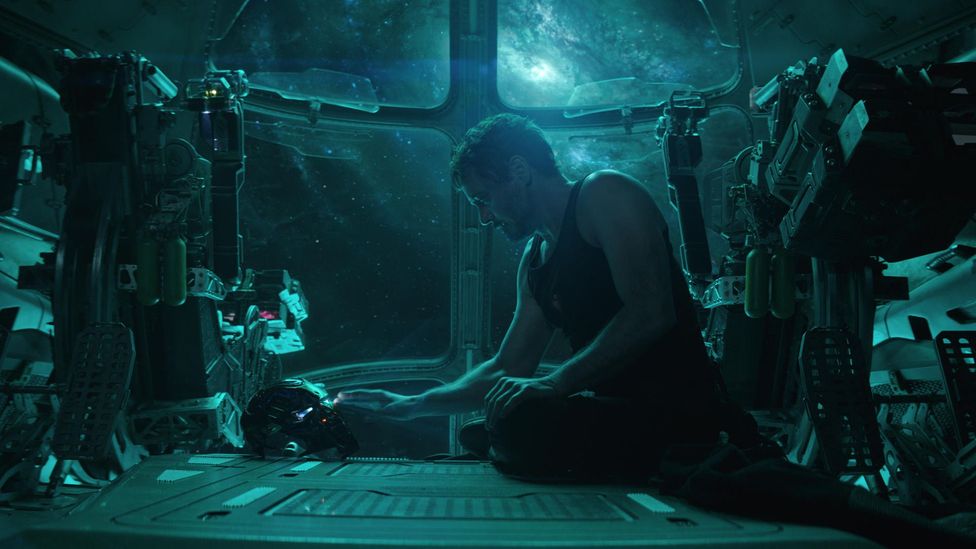 Last year’s apocalyptic Avengers: Infinity War ended with purple meanie Thanos (Josh Brolin) obliterating half of the lifeforms in the universe, including Spider-Man and Black Panther. How can the survivors defeat him? And how can they revive his victims (because, let’s face it, Spider-Man isn’t going to stay disintegrated)? All we know for sure is that our heroes have got three hours to get the job done, making Avengers: Endgame the longest ever film Marvel has produced. But there are rumours that, as some of the stars’ contracts are up, several major characters (Captain America? Iron Man?) will die – and this time they’ll stay dead.

Released 24 April in Australia, Germany, Denmark and France, 25 April in Ireland and 26 April in Canada and the US 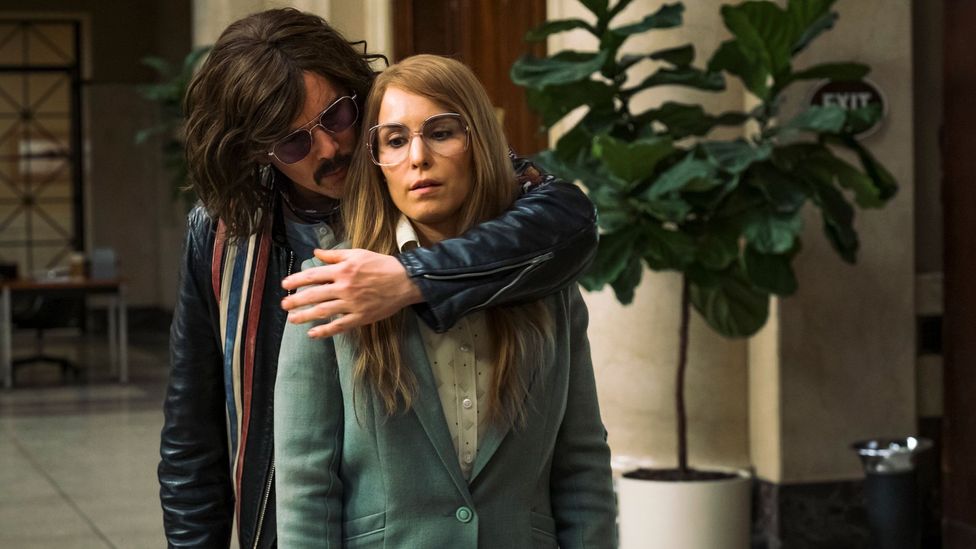 Stockholm Syndrome is what happens when a hostage victim comes to like or even love the person who has taken them captive. The condition was named after a 1973 hostage crisis, a crisis recreated in Robert Budreau’s Stockholm. Ethan Hawke plays the magnificently moustachioed Swede who bursts into a bank with a gun and Noomi Rapace is one of the women who is stuck in the building with him for four days. Billed as being “based on the absurd but true story”, Budreau’s film sees the events not as the stuff of dark drama, but of riotous farce. According to FilmThreat, “its madcap energy keeps things fresh and entertaining from start to finish”.

Released on 12 April in Canada and the US 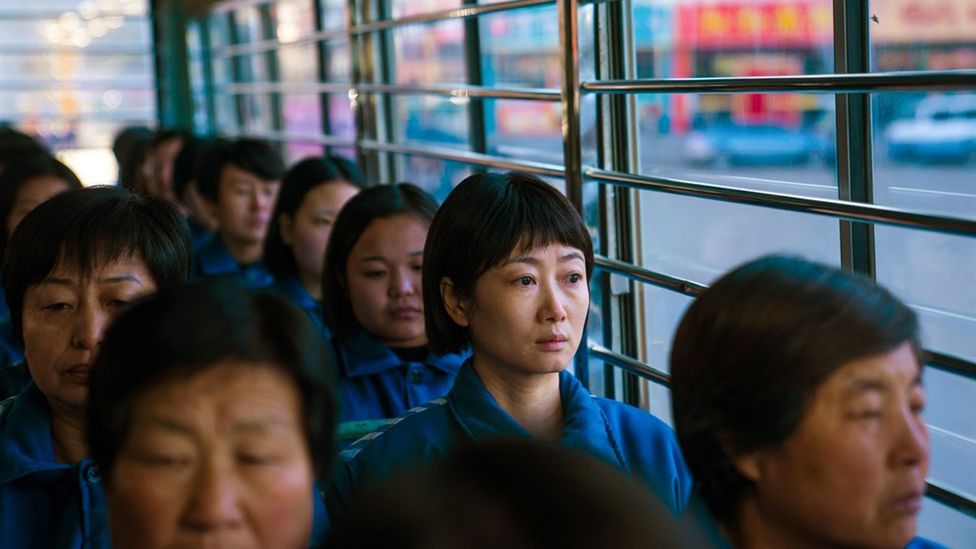 When a gangster (Fan Liao) is ambushed by a gang of thugs, his quick-thinking girlfriend (Tao Zhao) scares them off by firing his pistol in the air. And when the police arrive, she pretends that the unlicensed gun is hers, not his. But the gangster rewards her self-sacrifice by disappearing, and so, after years in prison, she sets off on a journey through China to find him. Jia Zhangke’s film may begin as a snappy yarn about some small-time crooks, but it evolves into a hypnotic meditation on the ways people and places can change almost beyond recognition. The Wall Street Journal says: “No one makes movies like Mr Jia does. He’s a dramatist with the eye of a documentarian and the instincts of a historian, even a geographer. But he’s also a romantic poet, and his heroine is driven by love as far as it can take her.” 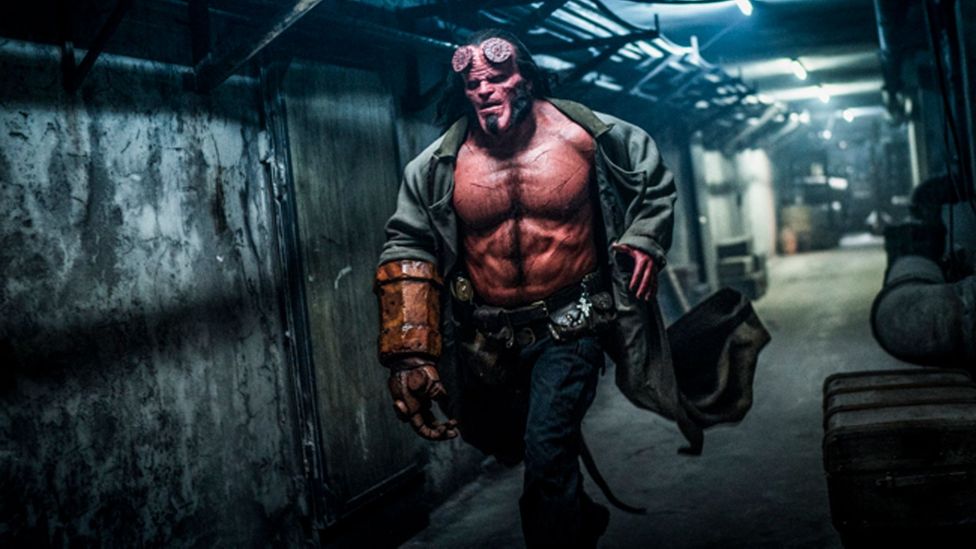 A decade before he made the Oscar-winning The Shape of Water, Guillermo del Toro directed two films about Hellboy, a grumpy half-demon who files down his horns and becomes a sharp-shooting, Nazi-hunting secret agent. The bad news for fans who have been praying for a third instalment is that the new film, based on the comics by Mike Mignola, is a reboot with a different cast and director. David Harbour (Stranger Things) has taken over from Ron Perlman in the lead role (not that you can tell it’s him beneath the scarlet prosthetic make-up), and Del Toro has been replaced by Neil Marshall, the British horror-comedy specialist who directed The Descent, Dog Soldiers and two acclaimed episodes of Game of Thrones. One aspect that might cheer up those frustrated fans: unlike the Del Toro films, this one is “Rated R for strong bloody violence and gore throughout”.

Released 11 April in Australia, Brazil and Germany, and 12 April in the US 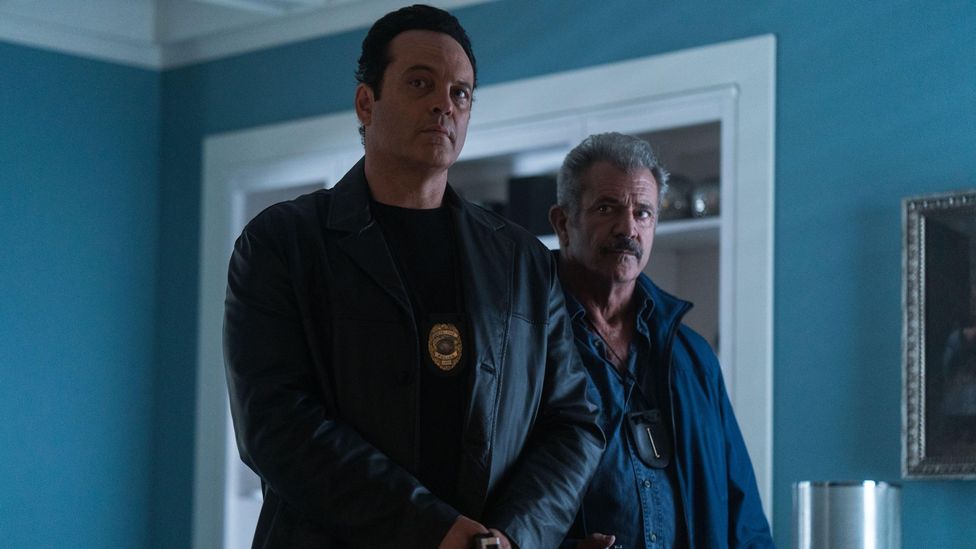 Two cops (Mel Gibson and Vince Vaughn) see a bank robbery in progress and follow the crooks to their hideout. It’s a simple B-movie premise, but S Craig Zahler (Bone Tomahawk, Brawl in Cell Block 99) has a unique gift for taking such premises and developing them into darkly comic, shockingly violent thrillers, chock-full of dialogue that Quentin Tarantino would envy. More importantly, he takes the time to examine the thoughts and lives of his characters – most provocatively, in the case of Dragged Across Concrete, the racist and sexist detective played by Gibson. As RogerEbert.com reports, “This is a movie that puts you on the edge of your seat and then treats you to ten-minute scenes of two guys in a stakeout car eating egg salad sandwiches – and still keeps you on the edge of your seat.”

Released 22 March in the US and 19 April in Ireland 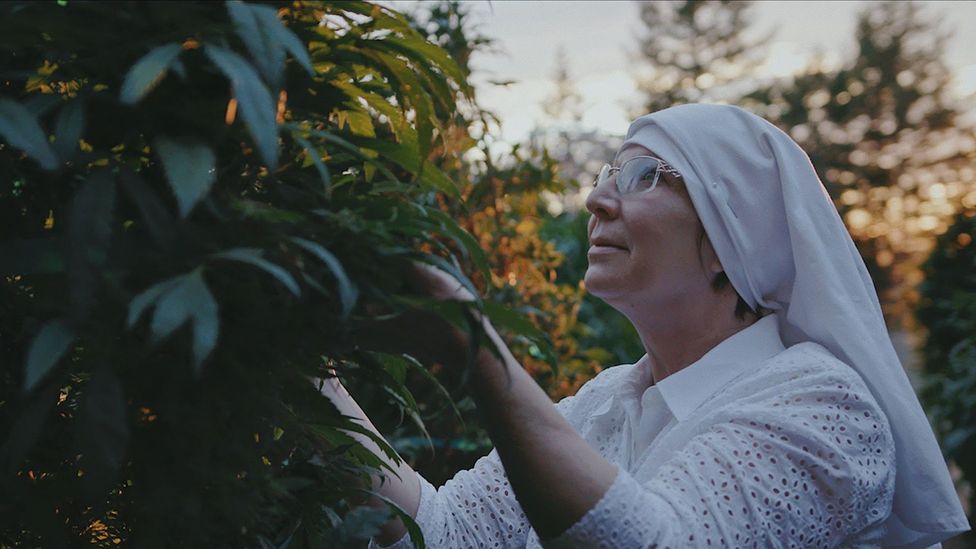 It’s one of those stories that was bound to be made into a documentary, and one of those documentaries that is bound to be made into a Hollywood comedy. Robert Ryan’s debut film tells the amazing true story of Christine Meeusen, a middle-aged corporate executive and mother of three who changed her life after uncovering her husband’s many guilty secrets. Not only did she set up a cannabis farm in California, but she renamed herself Sister Kate. She and her all-female colleagues now present themselves as nuns called the Sisters of the Valley, and they claim to sell nothing but eco-friendly hemp-infused oils and soaps for medicinal purposes. The local sheriff and drug cartels aren’t convinced.

Released 19 April in the US 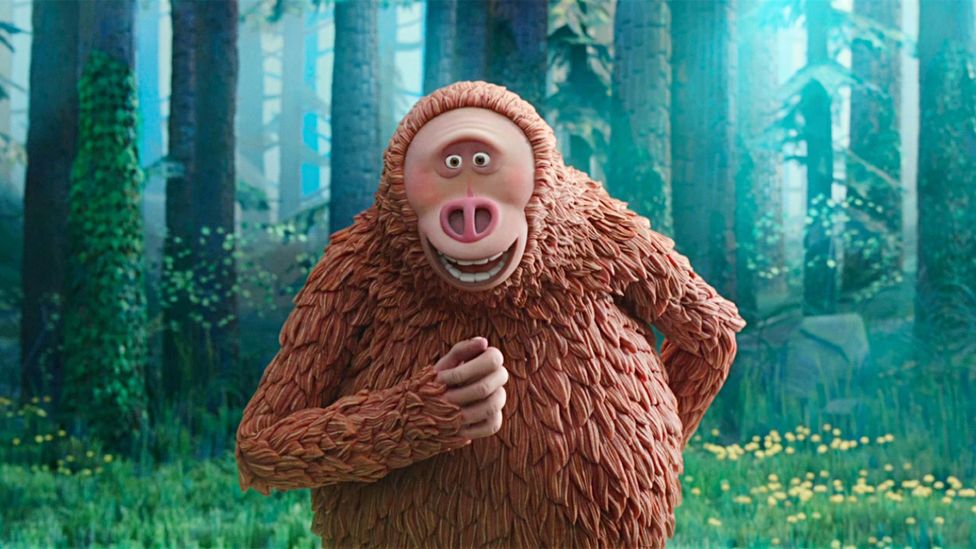 Don’t miss Missing Link. While most US animation studios concentrate on computer-generated cartoons, Laika has advanced the art of stop-motion animation via the quirky likes of Corpse Bride, Coraline and Kubo and the Two Strings. Their current film is written and directed by Chris Butler, who made Laika’s Oscar-nominated ParaNorman. A family-friendly adventure, Missing Link features an arrow-nosed Victorian explorer (voiced by Hugh Jackman) and a mild-mannered, fur-covered giant (voiced by Zach Galifianakis) who happens to be named Mr Link – Susan Link, to be precise. The odd couple sets off around the world in search of more Yetis, and on the way they bump into characters voiced by Emma Thompson, Stephen Fry, Matt Lucas and David Walliams.

Released 5 April in Ireland, 11 April in Australia and Singapore, 12 April in the US and 19 April in France