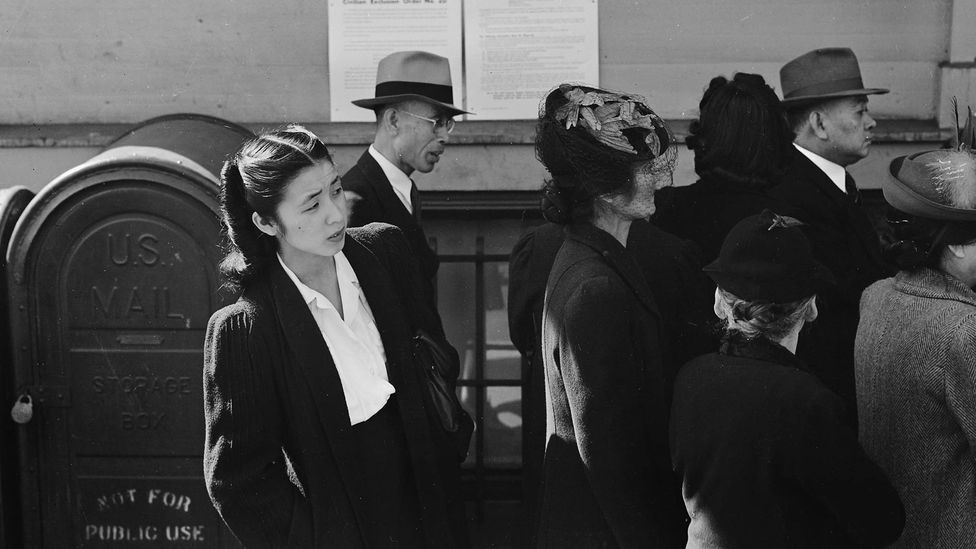 By Oliver Lunn 2nd April 2019
A current exhibition of photos shows the forced removal and incarceration of Japanese Americans during World War Two. Oliver Lunn looks at how the images subverted propaganda.
W

When the US government hired Dorothea Lange to take photographs of the forced removal, incarceration, and resettlement of Japanese Americans during World War Two, they thought they were being clever. They commissioned Lange – already famous for her Migrant Mother photograph from the Great Depression – to show the ‘humane’ treatment of Japanese Americans, and to bolster support for their resettlement. The photos were intended to be propaganda for the War Relocation Authority (the government agency that handled the forced removal and relocation). But Lange, of course, had other ideas.

“They didn’t think through what kind of photographs she was likely to take,” says Anthony Hirschel, head curator of Then They Came for Me, an exhibition currently at The Presidio in San Francisco that tells the story of the forced removal of 120,000 Japanese Americans from their homes on the West Coast.

Her photos, more social realism than propaganda, lay bare the reality of this historical moment: fear and uncertainty on the faces of Japanese Americans in a registration queue, anxious looks of families carrying all their belongings, not having a clue where they’re being taken. The photos say, Look at what is happening here in the United States. “By nature, Lange was not in sympathy with the government’s mission,” Hirschel adds. “She took these photos and became an advocate during the rest of the war that the camps should be closed.”

In the exhibition, Lange features alongside Clem Albers, Russell Lee, and Ansel Adams. Crucially, the show also includes work by incarcerated Japanese American artists Tōyō Miyatake and Miné Okubo, the former initially detained at the Manzanar internment camp, where he smuggled in a camera lens and fashioned an improvised box camera. Though this was strictly forbidden in the beginning, rules eventually loosened and he was allowed to photograph the camp – as long as a white officer snapped the shutter.

Then They Came for Me tells the story of this sad and shameful period in US history. For Hirschel, this chillingly resonant show has a lot to teach us. “Some people might say, ‘It can never happen here’. The truth is, it has happened here. And it could happen again.” 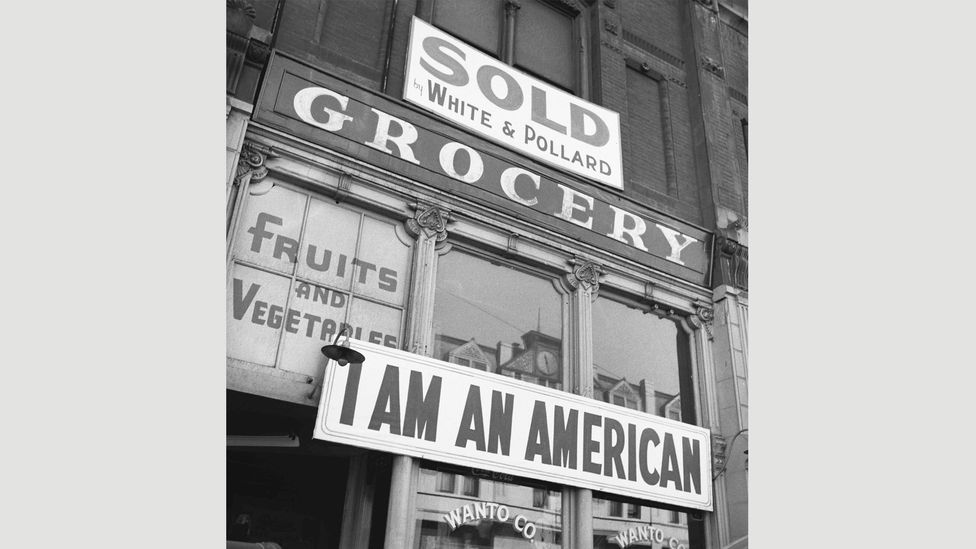 One of Lange’s early pictures in this series is an unassuming photo of a grocery store’s signage. ‘I AM AN AMERICAN’, one sign declares. The store’s Japanese-American owner commissioned the sign the day after Pearl Harbor, in 1941. Lange shot the storefront several months later, sensing the impact of the owner’s bold declaration. “The owner knew that things were going to go badly for him,” says Hirschel. “Lange took that photo, and what you see is not only his declaration ‘I am an American’, but also, at the top, the fact that his business has been sold. He understood the threat that was coming.” 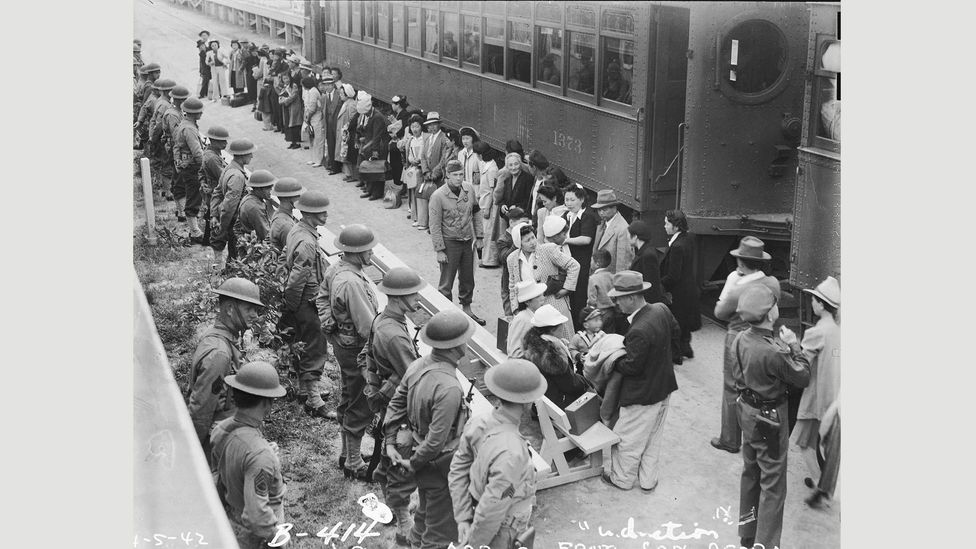 Like Lange, Clem Albers was another US photographer employed by the War Relocation Authority. In one of his most sobering pictures, he captures the arrival of Japanese Americans at a station. Facing armed soldiers, the families, who had been told they could bring only what they could carry, are wearing their finest clothes. This, Hirschel explains, was because they didn’t know where they were going or for how long. They were, in reality, being herded to a detention centre at a former racetrack where they would stay in old horse stalls that stunk of manure. 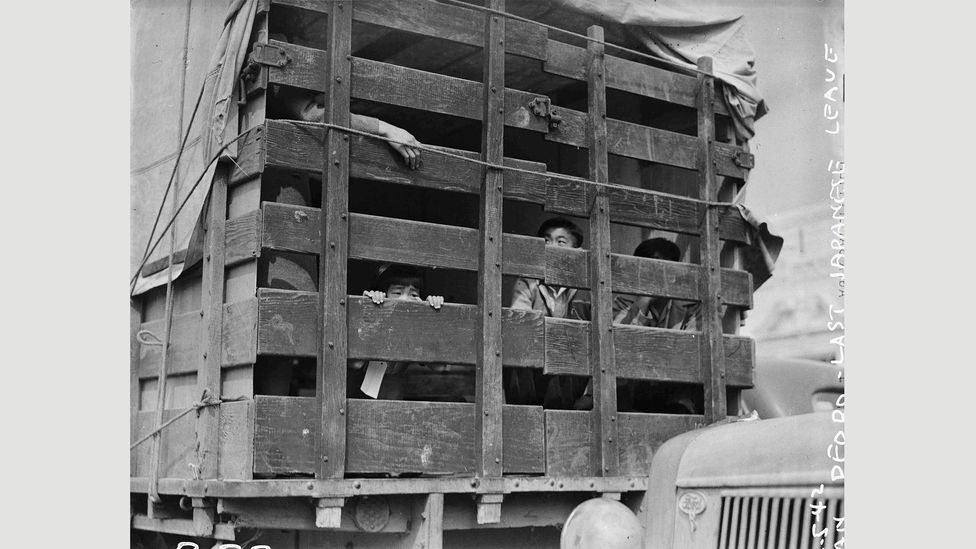 Albers, that same day, photographed children cooped up in the back of a truck bound for a detention camp. We see the worry on the face of a child peering out through wooden slats, tagged like luggage, caged like an animal. In fact, this was a family truck and they were a farm family, Hirschel explains. “At the very beginning the government allowed people to bring their vehicles. But they quickly ended that policy when they realised that they were going to have this vast number of abandoned vehicles at every camp.” 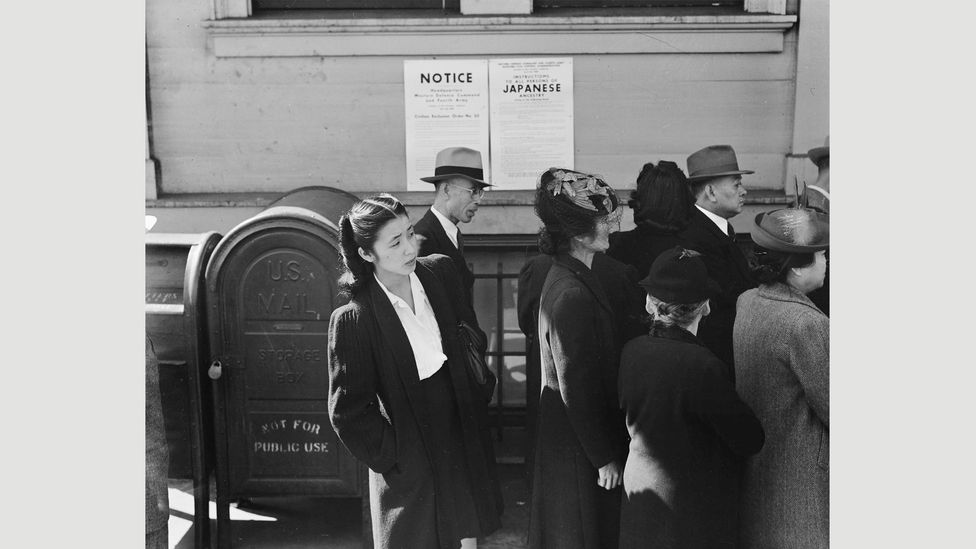 In San Francisco that same month, Lange took her best-known picture from the programme. We see a Japanese-American woman at the back of a queue, standing in front of a notice demanding Japanese Americans register. The woman looks ahead, anxiously. What’s going on? she seems to think. Lange’s lens is acutely aware of the disturbing reality. “That moment in the photograph is really significant for the fear and uncertainty,” says Hirschel. “All they were told was, ‘You must come and register’.” 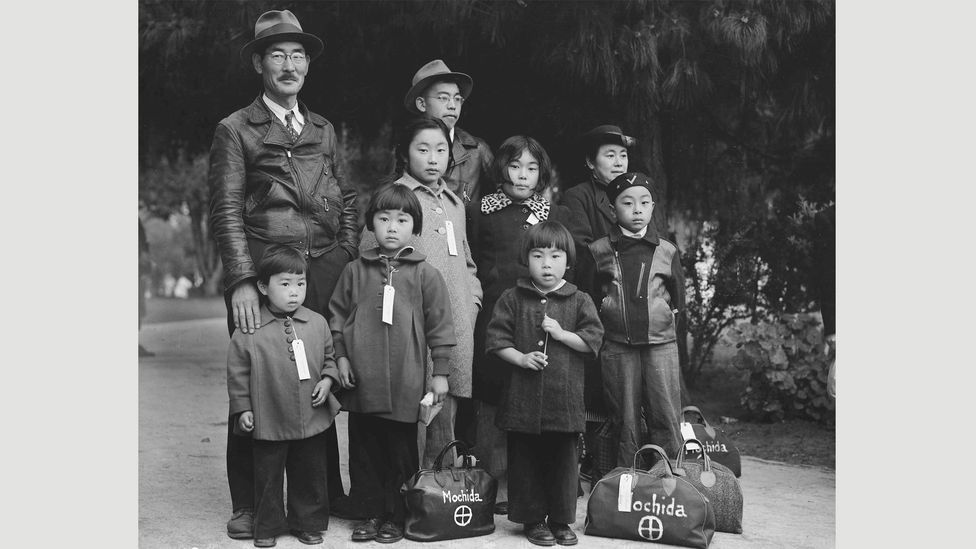 Capturing the removal and detainment process from all angles, Lange shot the Mochida family’s portrait in Hayward the following month. In it, a man smiles proudly – perhaps the father trying to muster strength, his hand perched on his child’s shoulder. The kids are tagged again. Lange shows us both the anxiety and resilience of a family whose future is unknown. It affected the photographer deeply. “After she left the programme, she described the rounding up of these people as a performance. She really couldn’t take the emotional toll of what she said was going to become of these people.” 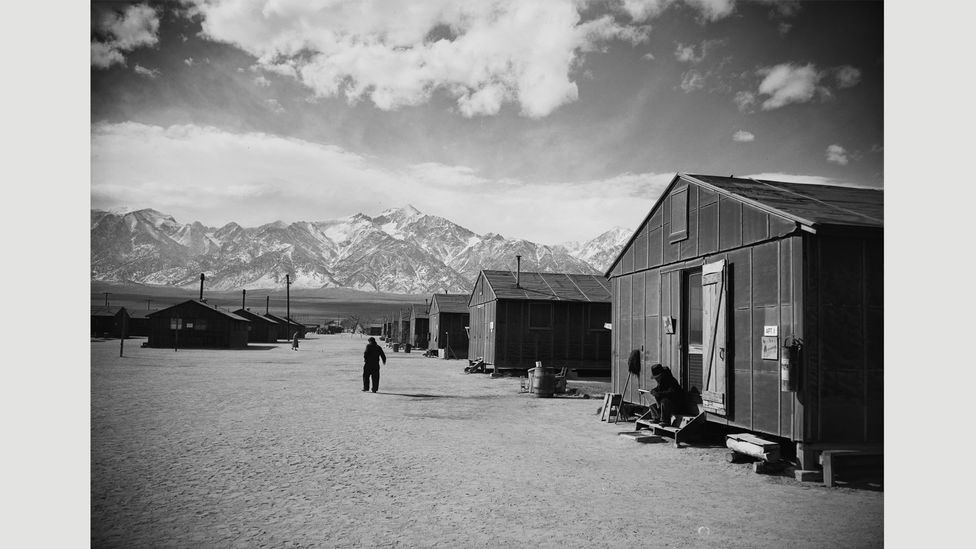 Ansel Adams’ approach was decidedly different. His background in landscape photography is clear in his sweeping vista of the Manzanar Relocation Centre. Mountains loom in the distance; an expanse of California sky hangs over the camp. It’s because of echoes with his romantic landscape work that other photographers were divided about his pictures. For Lange at the time, and later critics, he didn’t reveal enough of the hardships and indignities of life in camp, Hirschel says. 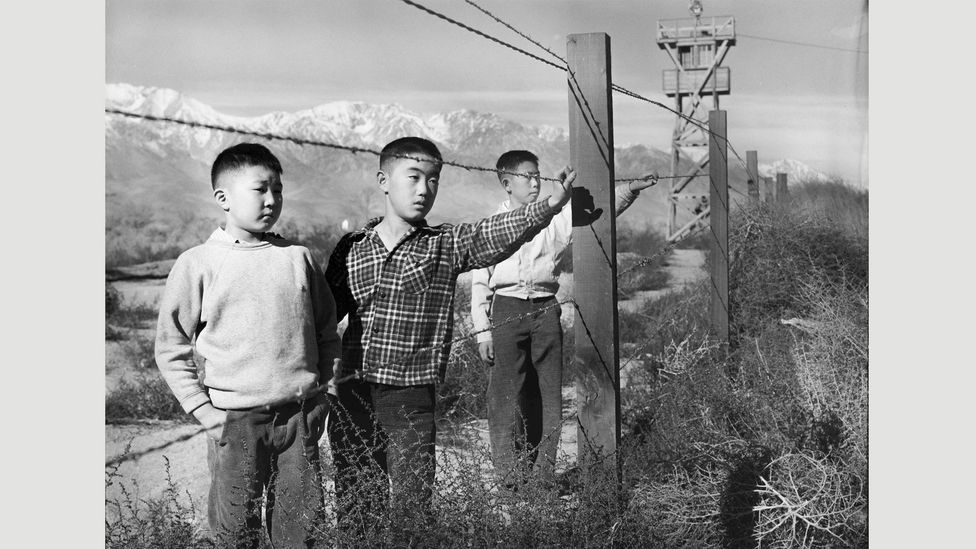 In contrast, Tōyō Miyatake’s photograph of three boys behind barbed wire is the very picture of hardship and life as a detained Japanese American, which Miyatake knew perfectly well. The three boys stand by the perimeter fence, two of them touching its barbed wire, while a watchtower looms ominously behind them. “The Miyatake photographs are important because they tell an alternate story from the perspective of someone who was imprisoned.” As a Japanese American who was detained in the early phase of the programme, Miyatake’s empathy with his subjects is written all over his work. 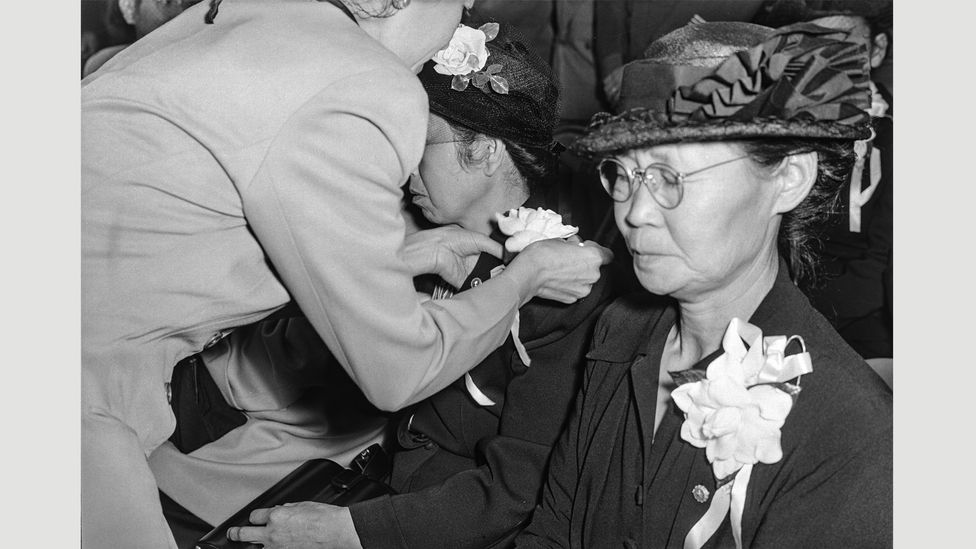 Miyatake’s other poignant picture from this period was taken at the memorial service for the first Japanese-American serviceman killed in action in Europe. It’s an intimately close shot of the serviceman’s grieving mother. “It certainly doesn’t seem like a photo that would have been taken by a government photographer,” says Hirschel, underlining Miyatake’s unique insider position among the photographers in the exhibition. 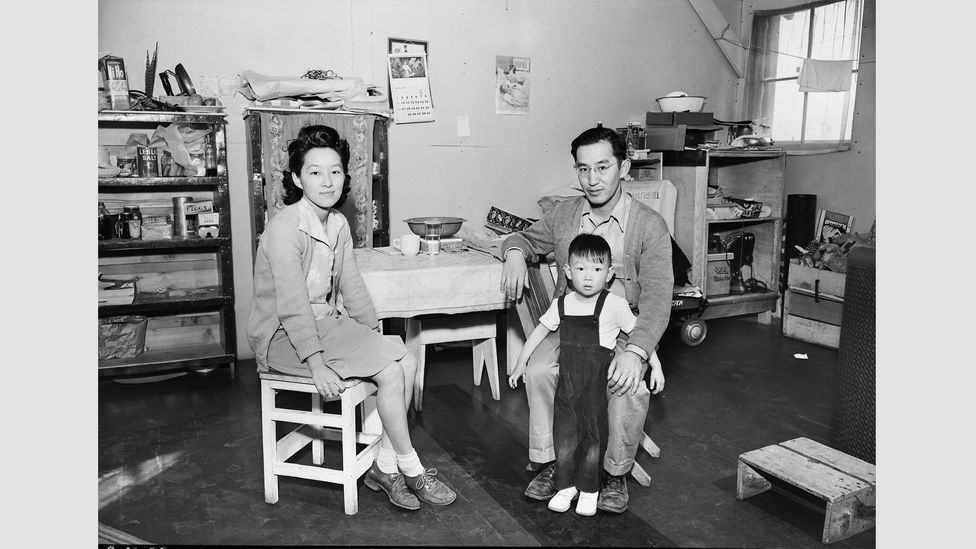 Despite Ansel Adams being a comparative outsider, and despite his reputation as a romantic landscape photographer, he did take one uncharacteristically cramped and impactful portrait. He shot the Tsurutani family in a cluttered interior at Manzanar the year before the end of WWII. This was his attempt to zero in on the dignity of the camp residents. “Although this is not the work for which he is best known, Adams viewed it as the most important of his career,” says Hirschel. “I think that speaks volumes about the way these photographers related to this episode in American history.”

Then They Came for Me runs until 27 May 2019 at The Presidio, San Francisco.