Loading
designed | Design
Less is more: The most iconic Nordic designs
Share using EmailShare on TwitterShare on FacebookShare on Linkedin 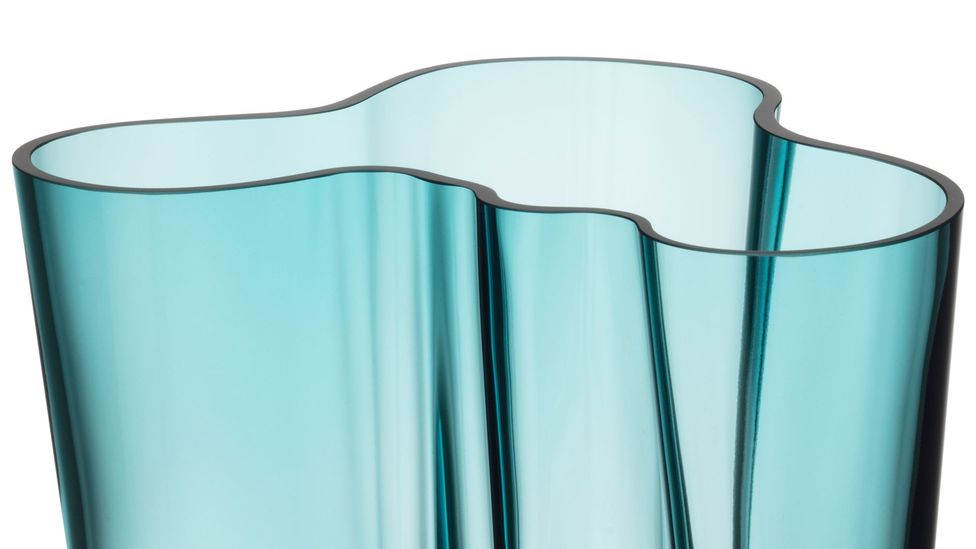 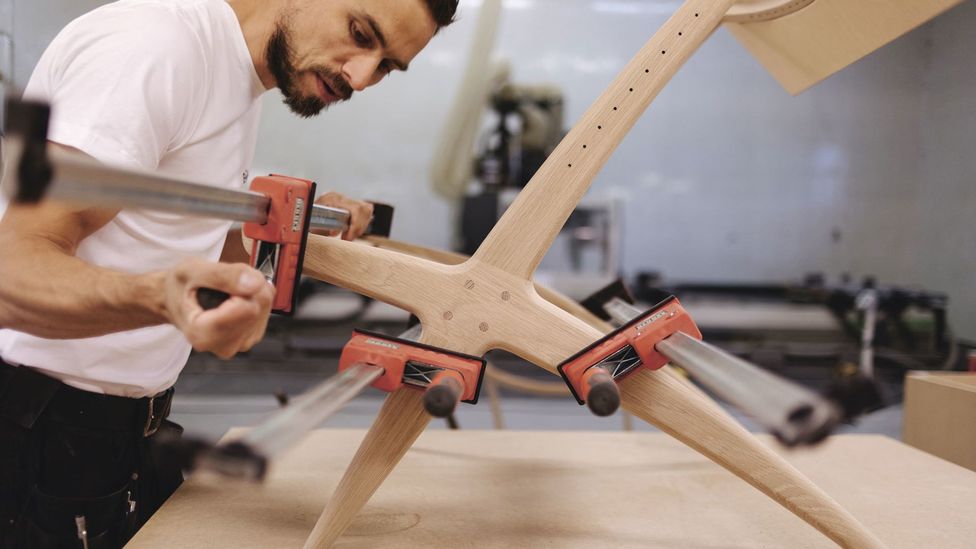 A Norwegian carpenter, an industrial designer and a former footballer spent a year scouring attics and archives for blueprints of forgotten but iconic furniture. The trio set up their business, Eikund, on the island of Eigeroya off Norway’s Western coast. There, they manufacture lost classics by the country’s mid-century-modern heroes including Bendt Winge, Torbjørn Bekken and Fredrik Kayser. Not exactly household names, but that’s the point, says Morten Hippe, of Eikund. “We saw a void when it comes to international design history [because] not a lot of people know about Norwegian design. When people talk about Scandinavian or Nordic design, it’s mostly Sweden, Denmark and Finland that are mentioned.” Eikund joins a coterie of mostly Nordic-based firms who recognise the cachet of mid-century aesthetics. Also in Norway is Fjordfiesta which reintroduced the Scandia range of chairs, designed by Hans Brattrud in the 1950s. The collection was manufactured from 1960 to 1972, “then the factory burnt down and it was out of production until I discovered it again in 2004,” says Pål Lunder of Fjordfiesta. “I contacted Brattrud, and he granted me the rights for the relaunch.” But what makes a piece iconic? “That status has to be earned over time, so that the product is now of lasting historical significance,” says Hippe. A significant marker is how the value of a piece increases on the used market, he adds. “It’s not every product from the 1950s and 1960s that collectors are interested in.” In the meantime, these companies are maintaining or reviving the reputation of a generation of inimitable designers, and keeping Scandi style alive. (Credit: Sigrid Bjorbekkmo / Eikund) 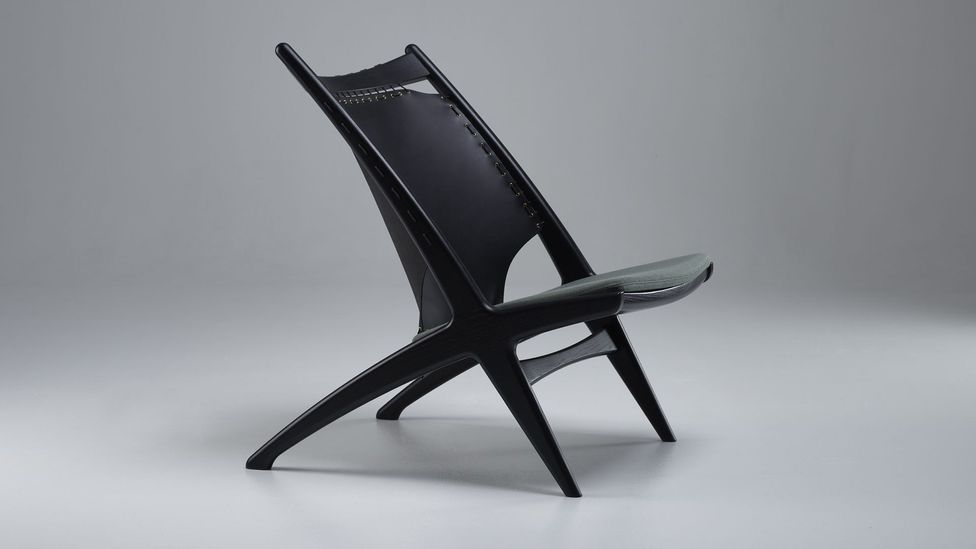 Fredrik A Kayser was an employee of Rastad & Relling Tegnekontor, a progressive furniture and interior design company that helped shape the post-World War Two Norwegian design scene. The 1955 Krysset lounge chair is his most famous design, and has been re-issued by Eikund. The ‘crossed legs’ shape informs the chair’s structure, with the front and back legs held together with four wooden nails. The backrest comprises a piece of leather sewn onto the frame. (Credit: Eikund) 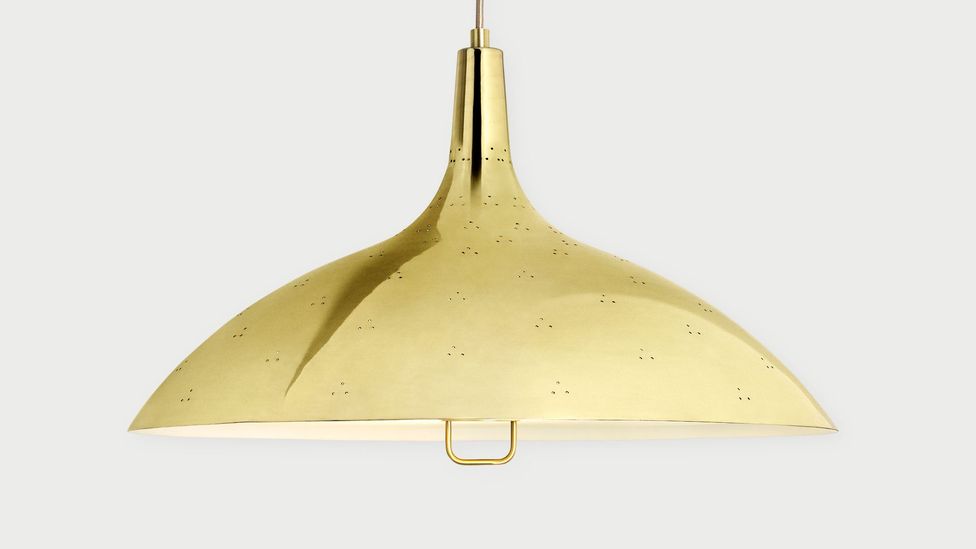 As one of the founders and chief designers of Taito Oy, Finland’s first industrial producer of lighting fixtures, Paavo Tynell was a pioneer of Finnish lighting design. “Tynell understood how to combine modernism with naturalism, and he provided his designs with a certain poetry and elegance,” says Jacob Gubi, owner of Danish firm Gubi. He says of the 1965 Pendant: “it’s fresh and relevant in present times, even though Tynell’s use of materials – often perforated and polished brass – and design language has a reference to the pre-war period.” (Credit: Gubi) 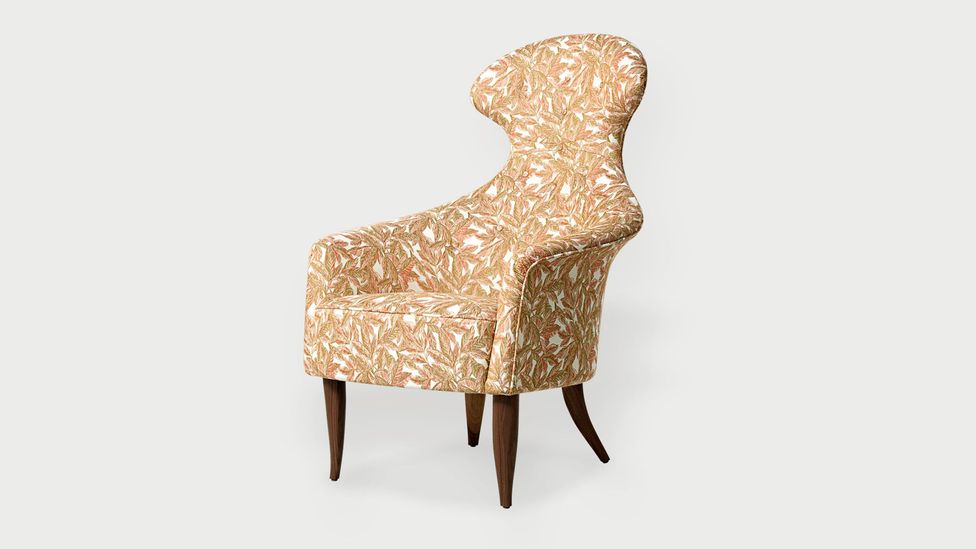 Swedish architect and designer Kerstin H Holmquist became fascinated with classic English upholstered furniture when she worked and studied in England straight after World War Two. The 1958 Eva lounge chair is part of her Paradiset collection, which she designed while she was employed by Nordiska Kompaniet. “Eva has a very female expression for a lounge chair,” says Jacob Gubi. (Credit: Gubi) 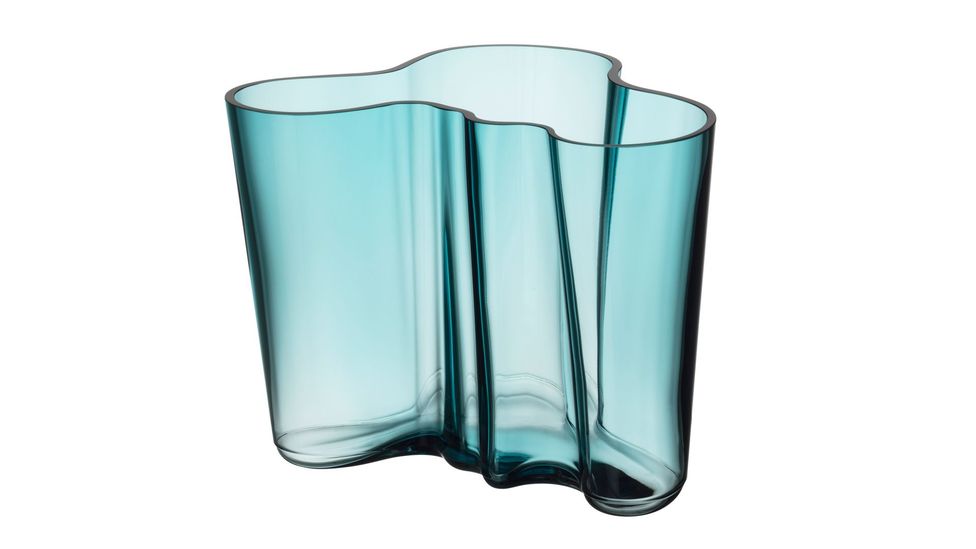 Alvar Aalto, his first wife Aino Aalto and Kaj Franck spearheaded the development of the Iittala brand, now a long-standing icon of Finnish design. The simple, organic shape of their 1936 Aalto Collection vases was a break from the decorative aesthetic of the time. It was inspired by waves – ‘aalto’ in Finnish – and the collection is still mouth-blown at Iittala’s factory. This year, a new ‘sea blue’ version has been issued. (Credit: Iittala) 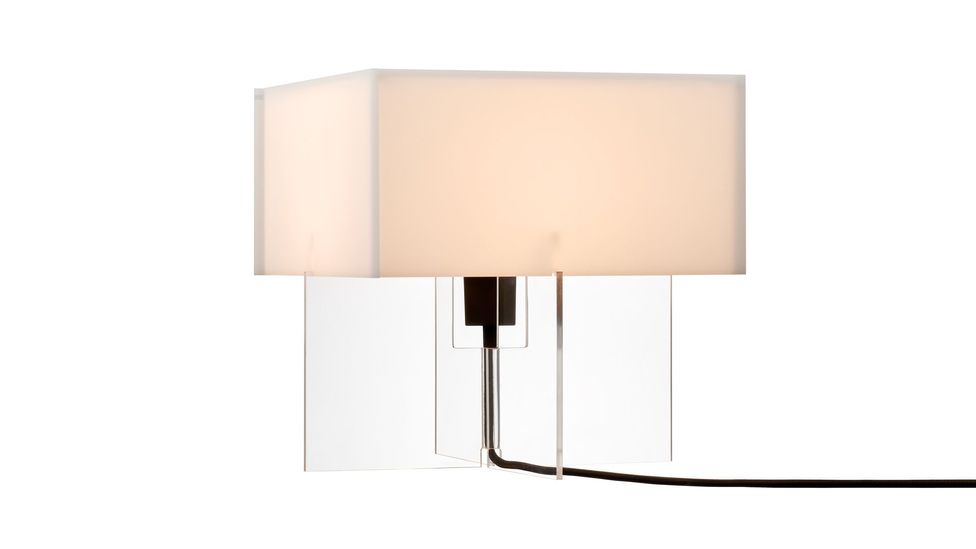 Bodil Kjær, a Danish architect, designer and professor, studied and worked in London, New York and Washington DC. She designed the 1961 Cross-Plex lamp after some candles accidentally set fire to a newspaper in her home. Her solution was a table lamp that could replace the candles but still offer a warm sense of ‘hygge’ to the room. The Cross-Plex, which has been reissued by Fritz Hansen, has functionalist straight lines, and comprises a clear acrylic glass base with a cubic shade of opal acrylic glass. (Credit: Fritz Hansen) 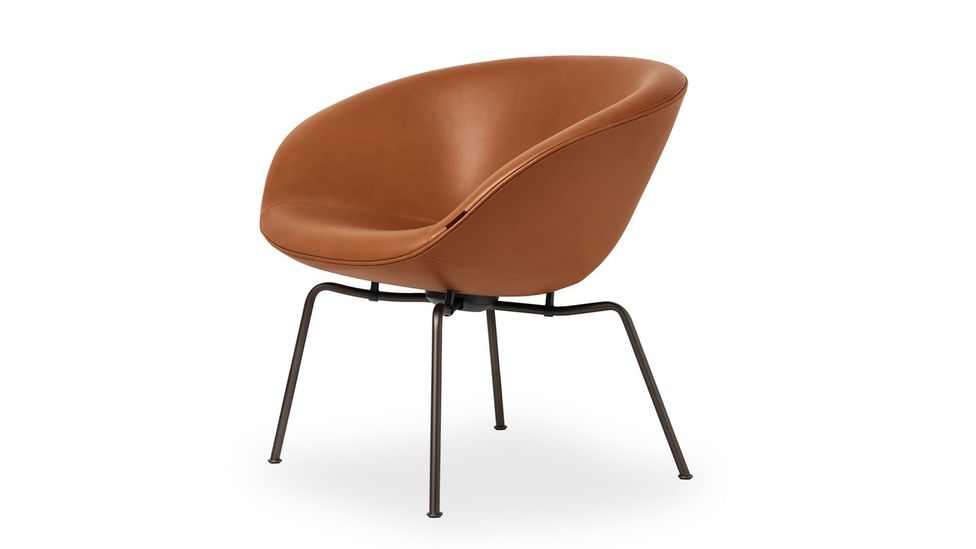 Arne Jacobsen’s 1960 Pot chair was originally launched by Fritz Hansen alongside the more famous Egg, Swan and Drop chairs. They were all designed by Jacobsen for the SAS Royal hotel in Copenhagen. However, the Pot was soon taken out of production. “It’s the forgotten chair, which deserves a relaunch,” says Christian Andresen, head of design at Fritz Hansen. “I see the chair as one of Jacobsen's quieter designs, which floats almost like a leaf in the air. This slightly modified version is a complement to Jacobsen's more modest design style, and a beautiful example of less is more.” (Credit: Fritz Hansen) 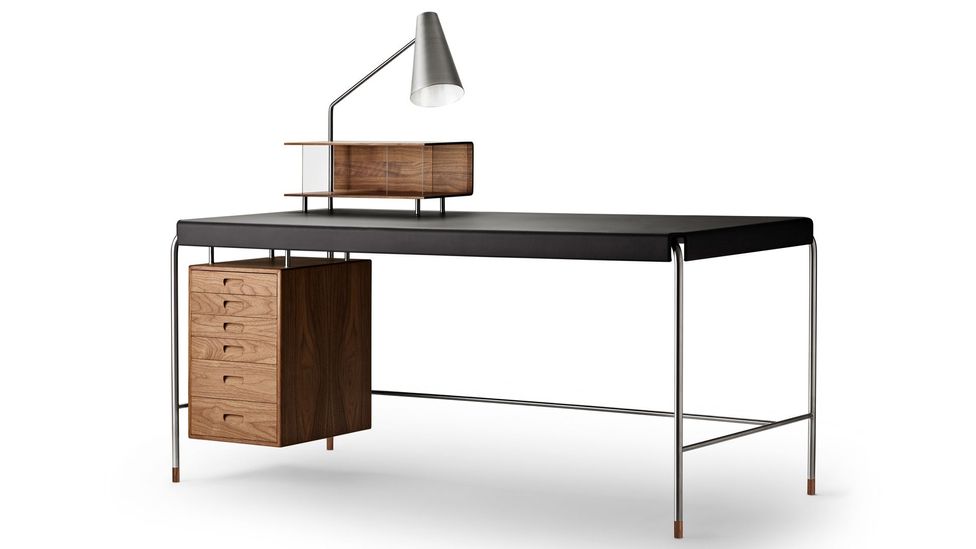 Arne Jacobsen designed the Society Table at the peak of his career in 1952. It’s an example his “boldness in combining new materials and experimenting with innovative shapes”, says Knud Erik Hansen of Danish firm Carl Hansen. Made of steel, veneer, leather and wood, it was commissioned as a one-off design by Burmeister & Wain, a Danish shipyard. This is the first time that it has been in production. (Credit: Carl Hansen & Son) 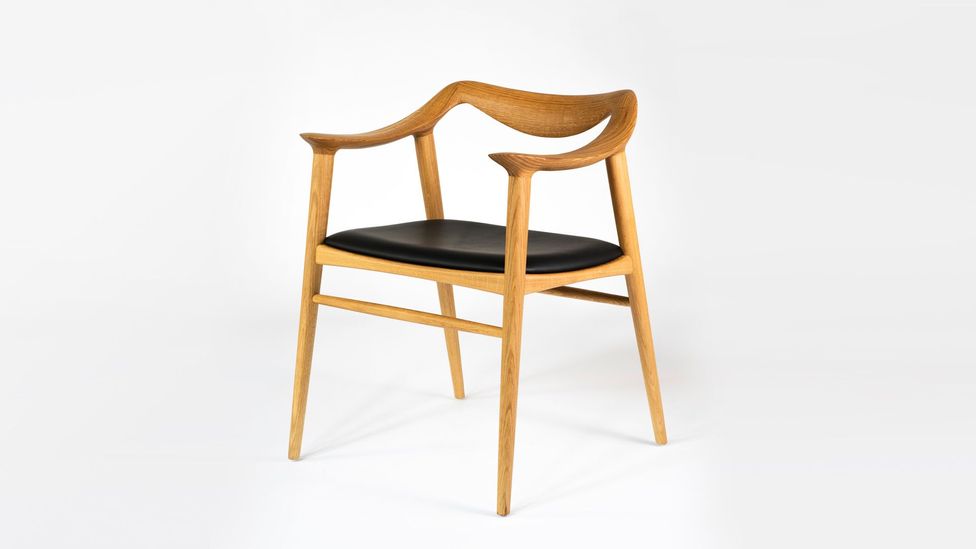 Rastad & Relling was a well-known design studio in Norway in the ‘golden age’ – 1950s and 1960s – of Scandinavian design, says Fjordfiesta founder Pål Lunder. Rolf Rastad and Adolf Relling employed interior design graduates from the Norwegian National Academy of Craft and Art Industry, “and therefore the studio functioned as an important incubator for post-war premier furniture designers”, he adds. The solid-oak and leather Bambi dining chair no.57 is being reissued with Utopia Workshop, a vintage store in Oslo. (Credit: Fjordfiesta) 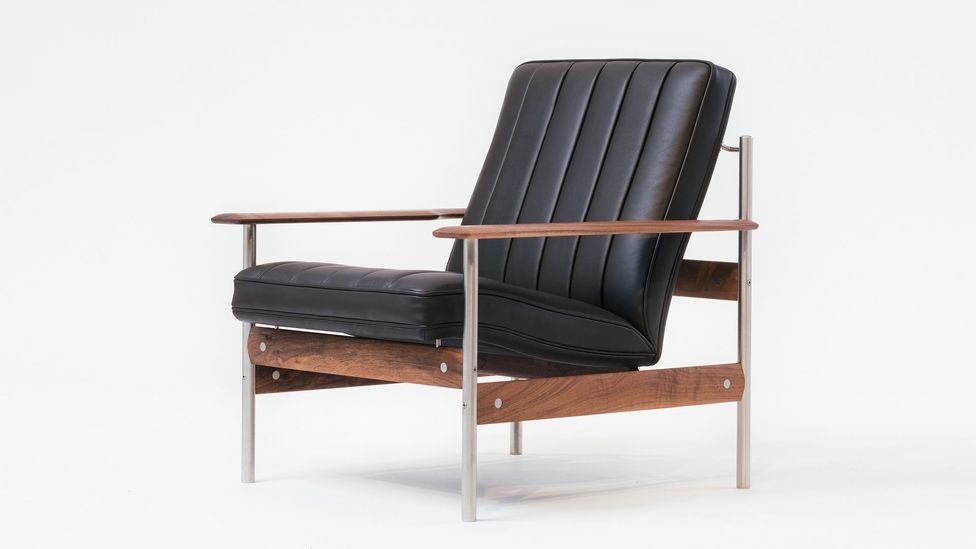 The Norwegian industrial designer Sven Ivar Dysthe, who studied at the Royal College of Art in London, is best known for his Laminette and Planet chairs. The 1960 1001AF lounge chair in walnut and steel may have been forgotten, by comparison, but in the 1960s it was a successful export model. Fjordfiesta’s Pål Lunder describes it as “not especially Scandinavian but very modern”. (Credit: Fjordfiesta) 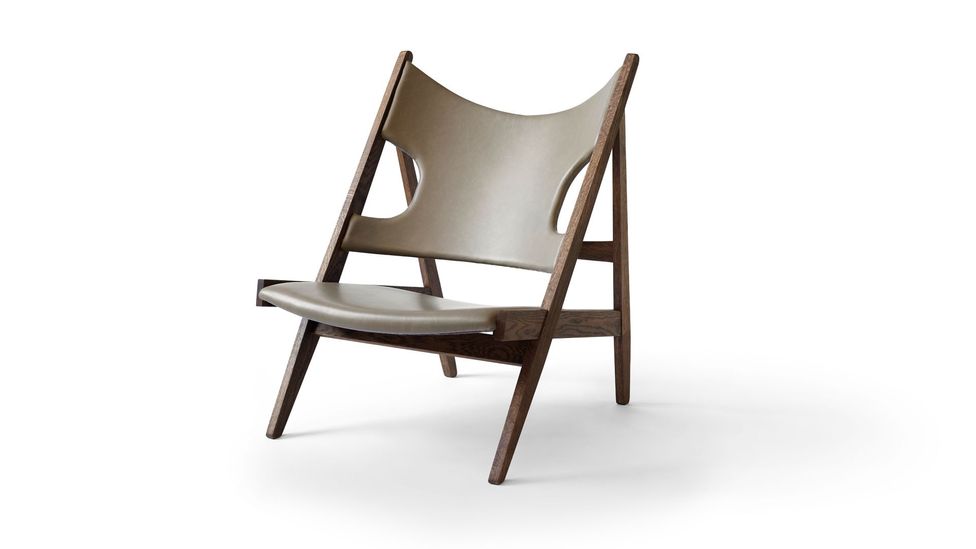 The Knitting Chair of 1951 got its name because of the cut-outs that allow the user’s elbows to rest while knitting – or reading. Nowadays, the design by architect and designer Ib Kofod-Larsen could accommodate users and their digital devices. Remade by Copenhagen firm MENU in solid oak and leather, it was first brought out as a limited edition, meaning the originals have become collectors’ items. (Credit: MENU) 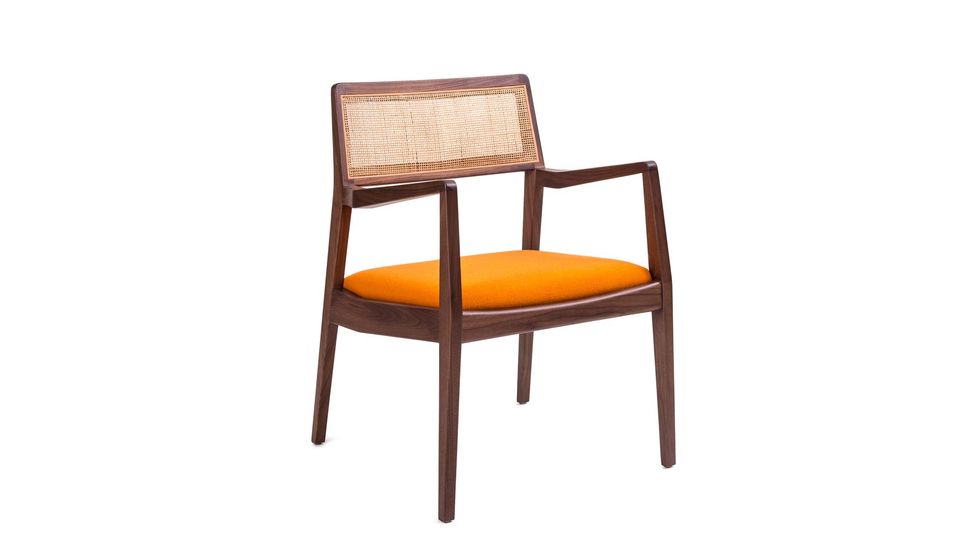 In 1964, President Lyndon B Johnson was photographed sitting on a C140 chair (designed in 1955) in the Oval office when he signed the Civil Rights Act with Martin Luther King. This reissued version is upholstered in a Kvadrat fabric created by mid-century Danish textiles designer Nanna Ditzel. The chair’s creator Jens Risom emigrated from Denmark to New York in 1939, and designed most of Hans Knoll’s first furniture collection, before setting up his own company. “His shaping of the frame and the line of the chair look in many ways like Gio Ponti’s,” says Yuichiro Hori, founder of Shanghai-based Stellar Works. (Credit: Stellar Works)

designed
1The cult designer who shaped a nation
designed
2Brave, bold and very Danish
designed
3The design geniuses who fled turmoil
Around the BBC