For decades, the idea of a future where meals were condensed into tablets was so popular that it became cliché. So why are we not eating them now?

It is a constant theme of early science fiction, and one you are almost certainly familiar with: the man or woman of the future pops a pill on to their tongue, knocks it back and is almost immediately satisfied. For inside the little white capsule was a full three course meal, designed to mimic the meals of the past in a single convenient, portable dose.

Take the 1930 science fiction musical Just Imagine, which tells the story of a man who is woken from a fifty year coma to find himself in 1980s New York. As he tours a dystopian city – where people are only known by number – he is taken to a “café”, where his new friends order him up a meal of clam chowder, roast beef, beets, asparagus, pie and coffee. With a little cajoling, he eventually swallows the pill, before declaring that “the roast beef was a little bit tough” and lamenting “the good old days”.

But if you look back to these “good old days”, the roots of the meal-in-a-pill stem not from the fertile minds of science fiction writers, but from the politics of the day.

This tiny, white vision of the future had its roots in late 19th Century feminism. In the lead up to the 1893 World’s Fair in Chicago, the American Press Association asked writers from a number of fields to promote the event by writing essays on what they thought the world of 1993 might look like. Their work was published in small town newspapers across the country. American suffragette Mary Elizabeth Lease predicted that by 1993, humans would only eat synthetic food, liberating women from the drudgery of the kitchen. People would “take, in condensed form from the rich loam of the earth, the life force or germs now found in the heart of the corn, in the kernel of wheat, and in the luscious juices of the fruits. A small phial of this life from the fertile bosom of Mother Earth will furnish men with substance for days. And thus the problems of cooks and cooking will be solved.”

Anti-feminist fiction of the time lampooned this fascination with the meal pill. Satirical books like The Republic of the Future (1887), by social conservative Anna Dodd, mocked the concept of women who did not wish to spend the majority of their day in the kitchen. Set in New York in the year 2050, the narrator of the novel facetiously announces that, “When the last pie was made into the first pellet, women’s true freedom began.”

The turn of the century also brought a fear that the planet simply could not provide enough food for its people, given the then-current rate of population growth. In the 1920s and 30s the meal pill showed up in popular media as something inevitable, with a touch of the scary. Satire often tried to soften the blow.

In 1926 a newspaper in Utah ran a series of cartoons poking fun at the idea. In one, a construction worker on a ledge digs through his pockets to realise that he has left his meal pill at home; a grocer plonks six turkey dinner meal pills on to the counter for a lady buying thanksgiving supplies; the ladies of the house reflect on the “antique” dirty dishes, a relic thanks to the meal pill.

They were fanciful ideas, made even more so by the fact that the fashion failed to keep up with food technology, meaning that diners still wore white tie. However, the ideas were plausible to many living through post-war years that had seen science and technology create tools that had helped tear the world apart, yet also offered hope of rebuilding it. In this world, man was merely a smaller part of a bigger industrial machine.

This was typified by the 1933 Chicago World’s Fair with its motto: “Science Finds, Industry Applies, Man Conforms.” It suggested that man must submit to the great advances of the day, including the meal-in-a-pill . Rather than derive pleasure from food, it was instead something to be controlled and reduced to its component parts. It was not nourishment for the soul, but sustenance for life and man must simply swallow the pill as the future of food came barrelling towards him.

It is the kind of technocratic, dysfunctional view loved by science fiction and is one that has repeatedly reared its head when talking about food pills. For example, in his 2006 book Meals to Come: A History of the Future of Food, Warren Belasco writes: “While most people vow and hope that they will never rely on pills for food, they presume future generations will conform to whatever ‘science finds’ – pills, algae or other dystopian horrors.”

But this submissive attitude disappeared in the 1960s, to be replaced by one of techno-utopianism, driven by the glamour and excitement of the space race. In the age of space travel, meal pills were seen as the next logical step in the evolution of food – the ultimate in efficiency and a triumph of man over nature.

High above the planet, food was sucked out of silver pouches by astronauts strapped into experimental capsules that had escaped the confines of Earth. These space powders – that could be rehydrated into gels and were unlikely to spill out into the delicate capsules – aimed to provide nutritionally complete meals that could be eaten through straws. And back on Earth, children and adults alike wanted to be part of the action. Foil-wrapped bars and powdered drinks such as Tang enjoyed a surge in status and popularity, whilst the emergence of dehydrated and condensed foods mean that food pills were once again back on the menu for future-gazers.

Combined with the arrival of TV dinners and Cold War fears over food security, depictions of future food also enjoyed a revival. For example, the Sunday comic strip Our New Age ran in over 110 newspapers around the world from 1958 until 1975. A 1965 edition of the strip touted the synthetic food of the future as an answer to the world’s food crisis. The four panel colour comic charted the changes in the evolution of food. The first panel explained how 9,000 years ago, humans were hunting wild beasts and gathering wild plants for food. The next panel declares that synthetic food is just the next step in modern agriculture, allowing science to feed a swelling population that is no match for old-fashioned methods of agriculture. Triumphantly, the last panel of the comic declares that chemists could now set up efficient factories “to meet all the food shortages anywhere in the world”.

Just as US President Herbert Hoover had won the election in 1928 on a promise of “a chicken in every pot”, the promise of the 1960s seemed to be “a meal pill in every pocket”.

As with so many visions of the future, however, the meal-in-a-pill turned from an object of fascination to one of ridicule. In the 60s and 70s, cartoon series like The Jetsons and films like Sleeper poured cold water on the idea, lampooning the dreamers of yesterday.

The trouble, of course, is that it is just not possible. Military programmes have came up with ever-compressed rations and pills that could help stave off hunger, but the idea of a three course meal remains as remote as the depiction of New York in Just Imagine.

But perhaps we have always known that. In 1936 the Jefferson City Post-Tribune ran an article recounting the views of a Dr Milton A Bridges of Columbia University. In it, he declared: "Human beings are never going to eat pills for meals… pills can never be made to contain sufficient caloric volume."

"It is perfectly plausible to supply all the vitamins and minerals needed for a meal in pill form. But you can't get calories except by eating food.”

It seems that humans were seduced by the idea of a meal-in-a-pill, whilst the reality was harder to swallow.

This was certainly the case for the women’s club in Missouri which held a “Year 2000” dinner event in 1944. A variety of meal pills were served: tutti-frutti pills, a brown pill for the meat course and a miniature chocolate pellet for dessert. The ladies in attendance were no doubt content to “play future”, until reality came back to bite them. Records show that after the pills they all sat down to coffee and plates of sandwiches. 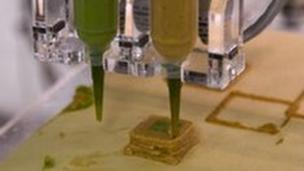