Loading
The Real Risk | Risk
Extreme sports: What are the risks?
Share using EmailShare on TwitterShare on FacebookShare on LinkedinShare on Whatsapp 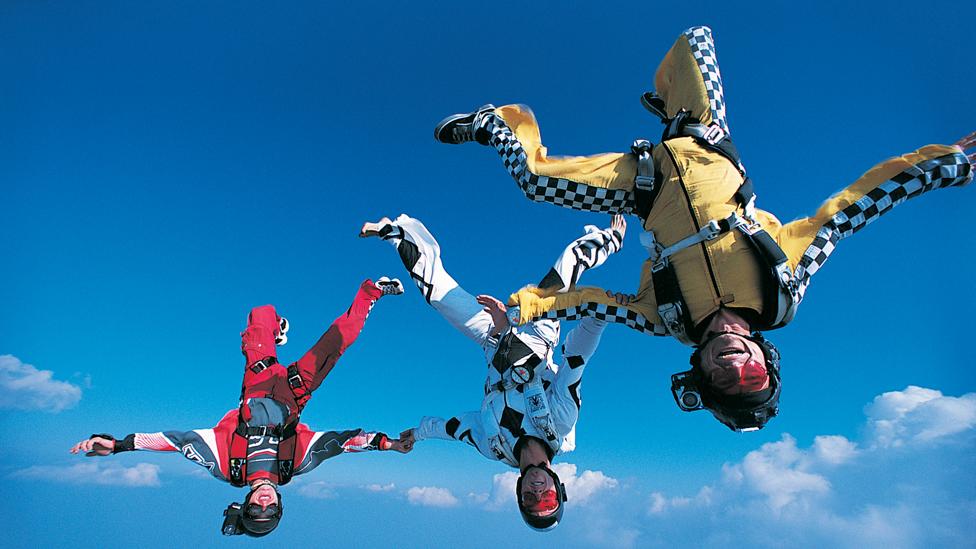 By David Spiegelhalter 18th November 2014
An upcoming sky-dive has our resident statistician contemplating whether risky pursuits are a good idea.
I

I have a confession to make: I am feeling a little nervous. I am making a TV programme for the BBC about chance and uncertainty, and for some reason the producers have told me that I need to do a sky-dive – presumably while they stand safely on solid ground, sipping tea and enjoying the spectacle of me floating gently to earth. Probably.

But as I ponder the wisdom of such an undertaking, the statistician in me has been keen to explore the real dangeers of various seemingly high-risk pursuits. There is seemingly no shortage of people apparently willing to scale great heights, or hurl themselves down from them – including me, it seems – turning extreme sports into a multi-billion dollar global industry.

Comparing these risks is not a clear-cut task. It is usually fairly straightforward to count the dead bodies. But do we consider these as a proportion of everyone who takes part, or those that attempt more dangerous forms, or per day of activity? And even then it is often difficult to get solid data on how many people are getting up to whatever pursuit turns them on.

All of which restricts the range of activities that we can look at. But I will begin with one of the earliest examples of extreme sports. Mountaineering has come a long way since the Alpine Club was founded in London in 1857 – when the British dominated mountaineering, and were bagging the classic Alpine peaks in desperately unsuitable clothing.

Climbing technologies (and clothing) have vastly improved since those heady days, but even apart from the possibility of falls, there are still the dangers of the low oxygen, freezing temperatures, exposure to wind and sun, and the exertion to contend with. Mount Everest is the classic example: from the first attempt up until the end of 2011, there have been 219 deaths, which is 1 for every 25 that actually reach the summit. Out of the 20,000 mountaineers climbing above 26,000 feet (8,000 metres) in the Himalayas between 1990 and 2006, an estimated 238 people died, a rate of around 12,000 micromorts per climb (See my initial post for a definition of a micromort as a 1-in-a-million chance of death). In another study of 533 mountaineers on British expeditions above 23,000ft (7,000m) between 1968 and 1987, there were 23 deaths (or 1 in 23), which comes out at 43,000 micromorts per climb – making it riskier than an average bombing mission in WW2.

That is the risk for people who enjoy going up, but what about those who cannot wait to come down with style. From Icarus’ brush with the Sun, and immortal fame, man has felt compelled to fly or glide in some form: parachutes were developed in the late 1700s, and hang-gliders were tested a hundred years later.

Parachuting competitions began in the 1930s, and the United States Parachute Association estimated that an average of 2.6 million jumps were made each year between 2000 and 2010.  But it’s still not entirely without risk: over that period 279 people died, around 25 a year, giving a rate of about 10 micromorts per jump.

Far more dangerous is “Base jumping”, in which sky-divers jump from fixed objects rather than planes. The Kjerag Massif in Norway is considered one of safest launching points as there is a shear 3,280ft (1,000m) drop which should give ample time to do something to soften the inevitable contact with the ground. Nevertheless, over 11 years and 20,850 jumps, there were 9 deaths and 82 non-fatal accidents: that is one death in every 2,300 jumps, or an average of around 430 micromorts a jump. And the Kjerag Massif is one of the safer spots: base jumping is not a mass-participation sport, for fairly obvious reasons, but 180 deaths have been recorded, increasingly featuring “wingsuits” that allow daredevils to soar down the mountain like a flying squirrel.

But if you do not feel like diving through the air, diving underwater provides more buoyancy, but has a different set of hazards. Jacques Cousteau turned scuba diving into a leisure activity with his development of the “Aqua-Lung” in 1943, and the British Sub-Aqua Club (BSAC) now has over 35,000 members.  The BSAC keeps a careful tally of diving fatalities and recorded 197 deaths over the 12 years from 1998 to 2009, an average of around 16 a year.  They estimated around 30 million dives over this time, so the average lethal risk was around 8 micromorts per dive: but this is an average – for BSAC members it was 5 per dive, 10 for non-members.

But what about something that you may think is less risky? Long-distance running might seem out of place in this list. But, as Pheidippides found 2,500 years ago after collapsing and dying from his 26-mile run to announce the victory at the Battle of Marathon, this event can end in more than sore feet. In 3.3 million marathon attempts in the US between 1975 and 2004 there were 26 sudden deaths, which comes out at around 7 micromorts a marathon on average – putting it at a similar level to a scuba-dive or a sky-dive.

When we look at sky-diving, scuba-diving, marathon running and other extreme sports, there seems to be some natural level of risk – say around 10 micromorts per episode – that people are prepared to take on for a challenging and exciting leisure activity, while still being reasonably sensible (this does not include BASE jumpers).

What is 10 micromorts equivalent to in regular life? Well, it is about the risk of death, from any cause at all, of an average 30-year-old man in 4 days of their normal life, or about 1 day for a 50-year-old. It is also roughly equivalent to the risk in the UK of a 60-mile (96km) motorbike ride, or 2,500 miles (4,000km) in a car, or having a general anaesthetic. Not that one can consider having a general anaesthetic as being a particularly enviable leisure activity.

Anyway, if there are further contributions to this column, you will know that I survived the sky-dive and lived to face another day. Wish me luck!

The Real Risk
1Microlives: A lesson in risk
2Marathon training 'may pose risk'
Around the BBC